John Saunders reports: Round nine, the penultimate round of the 2020 Gibraltar Masters, took place on Wednesday 29 January at the Caleta Hotel. If round eight was a little dull, this was a major contrast with a whole host of decisive results among the leading pairings, and some of the draws were highly entertaining. 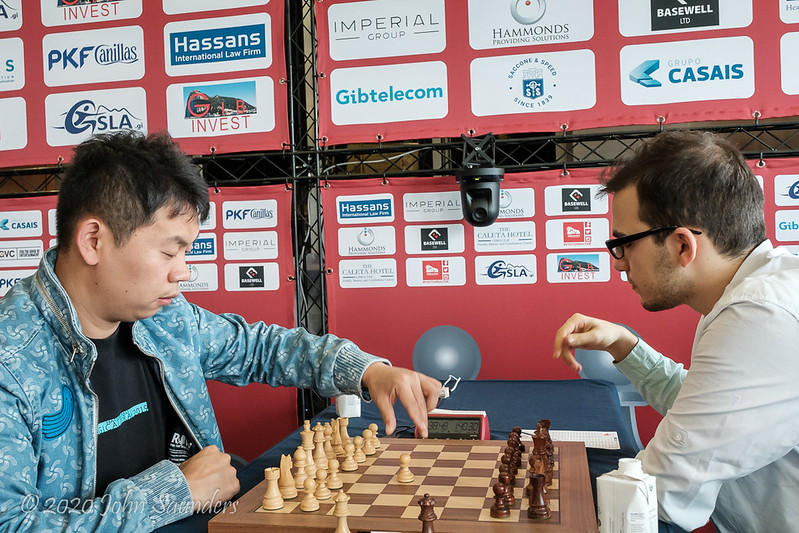 The pairings between the four leaders were draws, but anything but dull. Wang Hao versus David Paravyan opened with a Sicilian, Moscow variation, and started to get lively when Wang Hao went into a line which allowed his opponent to take a pawn on f2 with a knight. The problem was that the knight had a problematic escape. Nevertheless, Paravyan found a way to emerge with two minor pieces for a rook. Only then did the game calm down and eventually a draw was agreed. 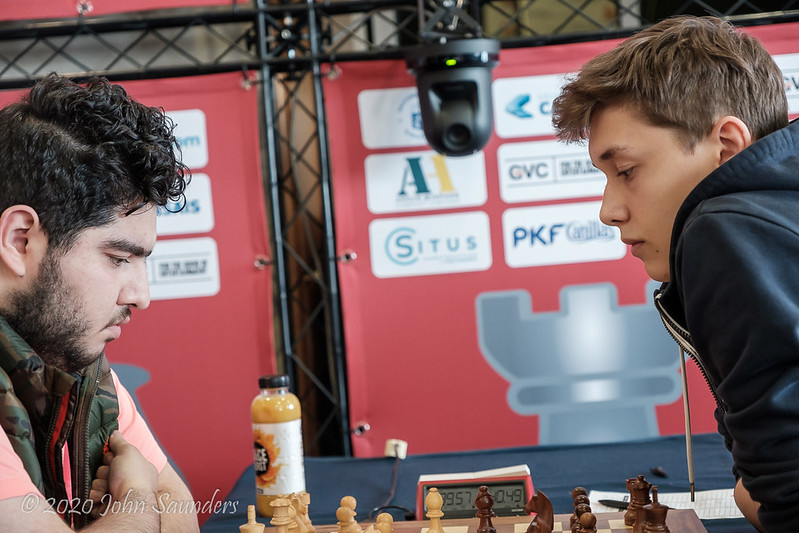 The other game between the leaders, Parham Maghsoodloo versus Andrey Esipenko was a humdinger, and for much of the game a draw was the least likely outcome. The opening was a sort of Giuoco Piano / Two Knights’ Defence hybrid. In this teenage brawl, the 19-year-old Iranian was the more enterprising of the two, punting a pawn sac which had been played by Vajda against Sutovsky a few years ago, with Black diverging with 11...Bd6. But the real craziness started on move 19. 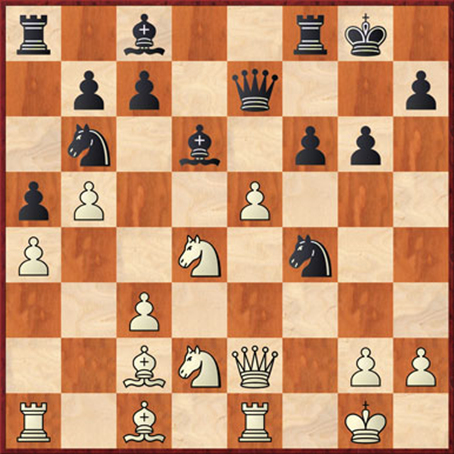 Here Maghsoodloo played 19.exd6!? sacrificing his queen for two minor pieces and the opportunity to drive Black back to the edge of the board. Parham has some nerve, I’ll say that for him. It was by no means easy for Black to defend, and there were plenty of tricks and traps along the way but, eventually, Black’s heavy material advantage began to tell. Esipenko gave back an exchange to simplify the position but, with queen for rook and knight, and the likelihood of mopping up some pawns, the position still greatly favoured Black. However, the way to victory wasn’t easy and the young Russian slipped up, allowing Maghsoodloo to concoct a drawing pattern based round a far advanced pawn which the queen could not stop from queening. So Black had to take a perpetual. The final phase of the game is worth a more detailed look. 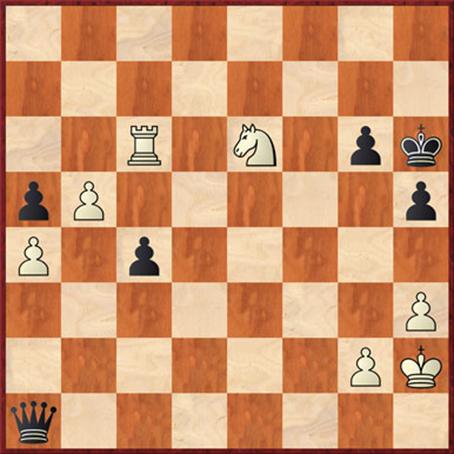 An excellent fight, and Maghsoodloo earned his slice of luck with his enterprising play in the middlegame.

Yilmaz-Cheparinov was a highly imbalanced and difficult struggle, and not just for the players. I’ve tried to understand it and not entirely succeeded. From the moment that Cheparinov sacrificed a pawn on move 11, there was a flurry of tactics that is hard to understand in the limited time available to your humble scribe between the end of the round and tomorrow’s criminally early start, so I’m going to abdicate and allow the reader to look it out for themselves. The one thing I can say about it is that it was entertaining, for which great credit to both players. One cannot help feeling a bit sorry for Ivan Cheparinov, who was the pacesetter from the beginning of the tournament, but he now misses out on the fight for first. But for the Turkish GM it was a great achievement to go toe to toe with the former Gibraltar Masters winner. 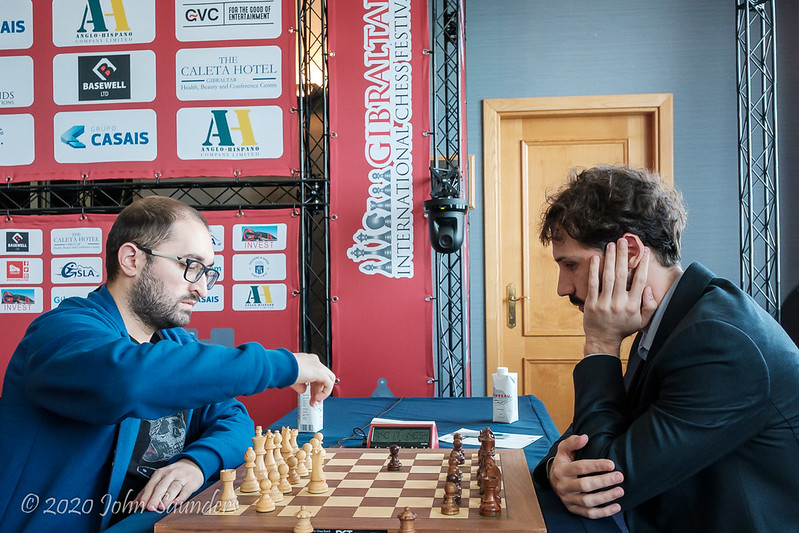 Yilmaz-Cheparinov: the chess equivalent of the gunfight at the OK Corral

Praggnanandhaa-Kobalia wasn’t quite as entertaining a draw as board two, but that’s an impossible standard to live up to and it was well contested. Kobalia gave up a pawn for an initiative and to push Pragg’s knight to the edge of the board out of play. But Pragg stood firm and Black couldn’t find a way to capitalise, so he opted for a rook sacrifice leading to perpetual check. It leaves both players still in the hunt for the first prize. What a story it would be if the 14-year-old were to pull it off – but we must not get ahead of ourselves or jinx the youngster’s chances.

We’d best skip over the all-Russian (lack of a) clash between Yuffa and Alekseenko as they perpetrated a known perpetual check line for a draw in 14 moves. But two of the tournament’s biggest names roused themselves for some action this round. Despite an early exchange of queens, Maxime Vachier-Lagrave poked and prodded at Emre Can’s position until it began to crumble, and Black couldn’t cover with all his positional weaknesses. Once the Frenchman had annexed a pawn and swapped off the rooks, he didn’t need as many as 400 blows to dispel his opponent’s grand illusion of a draw, and White was soon living la vie en rose in the hotel bar.

Veselin Topalov was also at his best, starting slowly with a modest Giuoco Piano against Italian GM Pier Luigi Basso but getting into top gear when his opponent allowed him to open up the h-file, though it cost him a couple of pawns to do so. Analysis engines aren’t entirely convinced of the potency of White’s attack but in practice it looked scary and hard to defend against. Before Topalov had three pawns for an exchange sacrifice, thus giving him a material advantage. Perhaps the decisive factor was that Black’s king was the more vulnerable, and White soon added to his pawn superiority to make it a relatively easy win.

David Navara came into the interview room declaring that his win against Argentinian GM Alan Pichot had been his best ever at Gibraltar (and this is his fifth visit). It involved a piece sacrifice for pawns and initiative, featuring a long king hunt. 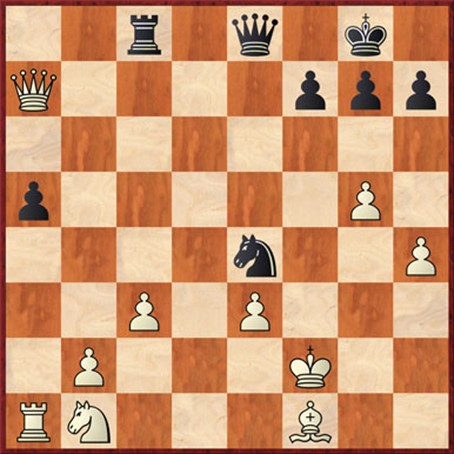 The next seven pairings in order all finished with a white win in what was a particularly bloodthirsty round. Adams-Antipov was a see-saw struggle and very un-Adams-like in its wildness. Adams admitted to interviewer Tania Sachdev that he had been “incredibly lucky to win” but felt it was a sort of evening up process for those games where he had nursed an advantage but not quite found a win. 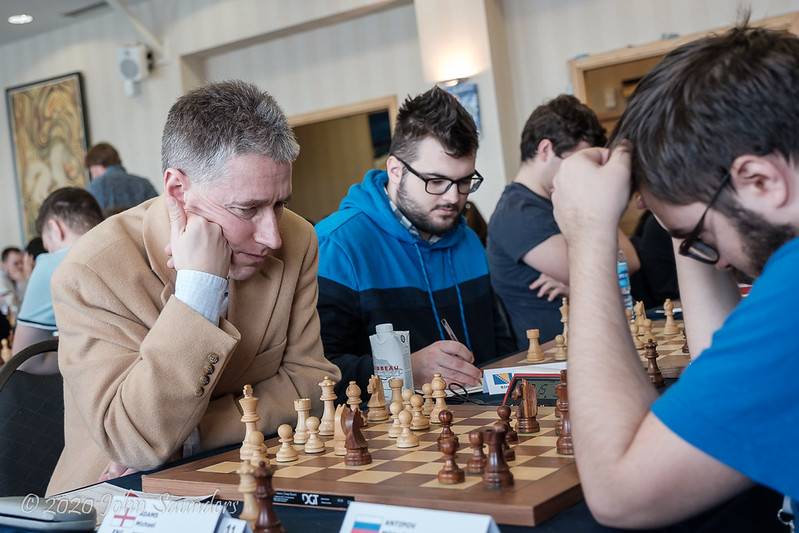 Mickey Adams admitted he was “incredibly lucky” against Mikhail Antipov

Mickey found himself facing the inevitable loss of a piece but in turn he received a couple of pawns which could be used to construct a wall to keep his Russian opponent at bay. That plan probably wouldn’t have worked but for an injudicious 35...Ng6 move which increased Mickey’s material compensation to three pawns, with two of them being passed and connected. Just as the time control was reached, Antipov’s mishandling of the position under time pressure had converted Adams’s material compensation into a won position.

Gawain Jones’ win over Li Di of China ensured that they will be two English GMs in with a shout of the first prize come tomorrow. A Petroff led to an even middlegame position which was later spiced up with a pawn sacrifice by the Englishman, playing White. Under pressure from a kingside attack, Black was obliged to give up the exchange for a pawn. It started to look difficult for the Chinese player anyway, but a further tactical slip saw Gawain’s pieces swarm in for the kill. 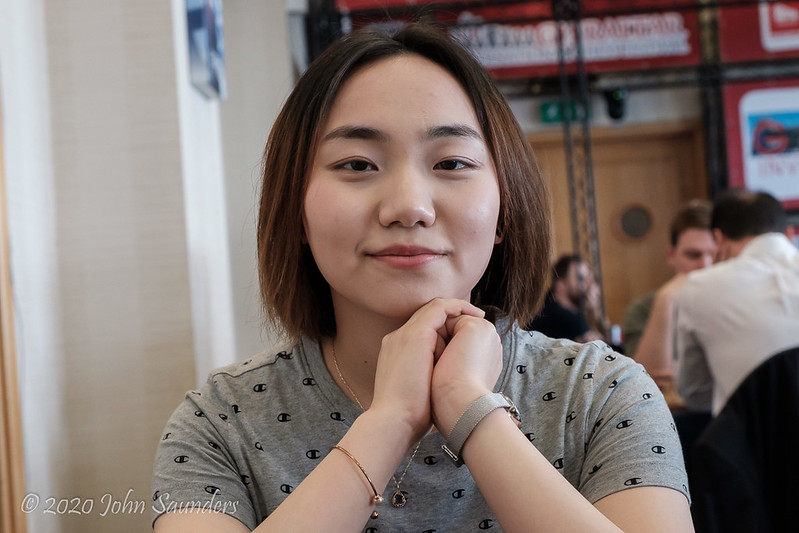 NOTE: the final round takes place on Thursday 29 January at 11am Central European Time (GMT+1) in the Caleta Hotel. That’s four hours earlier than the usual start time (to allow for possible play-offs in the event of a tie for the first prize). Please do tune in for the live broadcast conducted by GM David Howell and WIM Fiona Steil-Antoni here.