John Saunders reports: Round eight of the 2020 Gibraltar Masters took place on Tuesday 28 January 2020 at the Caleta Hotel. The first shock of the round was the non-appearance of Shakhriyar Mamedyarov, who was indisposed, thereby providing a default win for his opponent Praggnanandhaa. And, having just seen the round ten pairings, Mamedyarov is missing from those too, so one supposes that his tournament is over. All the best to the number one seed for a speedy recovery from whatever ails him. As regards Pragg, he looked a little disappointed when the arbiter told him his opponent wasn’t coming. He probably relished the opportunity to take on one of the world’s best players. It’s a pity but there’s nothing to be done. 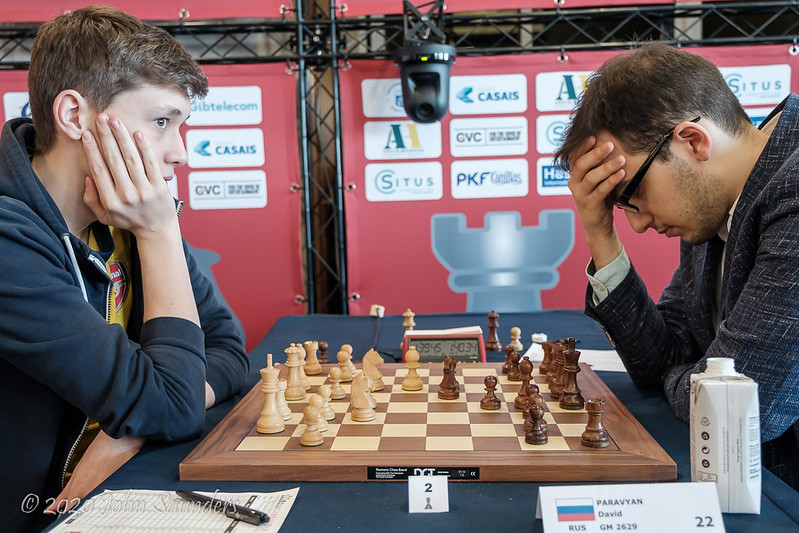 One has to look quite a long way down the pairings to find the next shock since there were a lot of draws amongst the leaders. Just one decisive game occurred on the top ten boards, with Ivan Cheparinov finally recovering from his comical disaster in the Battle of Sexes (he joked in the post-match interview that it took him two days to get over it) by winning with Black against Noel Studer of Switzerland. It was good to see Cheparinov win with the King’s Indian Defence. Even though I don’t play chess any more, I still carry a torch for this much underrated defence to 1.d4 which I stayed faithful to for decades. Any top-ranked player who plays it receives my unbridled admiration. Noel Studer went off piste as regards the choice of variation and allowed Black to equalise rather easily. Cheparinov then threw caution to the wind and grabbed a hot pawn, which White could regain some way down the line, but with a position which was only mildly worse. However, an injudicious 31st move by Studer and an even worse 32nd one left him in a horrible fix from which there could be salvation. Not a classic game but it was a case of ‘who dares, wins’ for the Georgian/Bulgarian and any luck he had was richly earned. 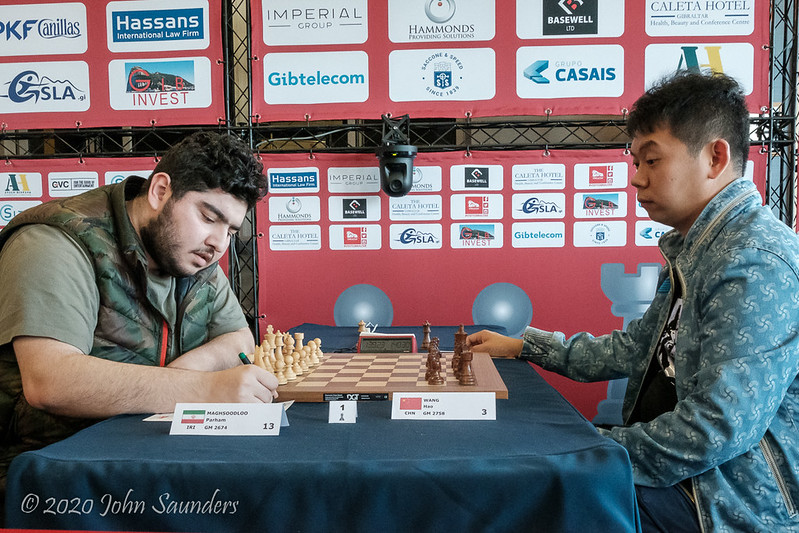 Maghsoodloo-Wang Hao: “nothing to see ‘ere, ladies and gentlemen, move along now!”

I’ve skipped over the top boards as there wasn’t much to see. At first sight Maghsoodloo versus Wang Hao was one of those games that you look at and think “wow! this is exciting!” as the players seek imbalance, give up their queen for rook and minor piece, etc, but then when you check the database, you find that it has all been played before and that the players are using it as a flamboyant way to show their erudition and then repeat moves. Am I being too cynical? Maybe, but you might like to know that it more or less replicates Erdos-Oparin from the FIDE Chess.Com Grand Swiss in the Isle of Man a few months ago; incidentally, a tournament in which they both took part,and in which Erdos scored eleven draws out of eleven. Esipenko-Paravyan looked fairly perfunctory: most of the pieces hoovered off, pawn structures mirroring each other, draw agreed on move 30. After all those nice things I wrote about Esipenko the other day, I’m starting to wonder about his work ethic. 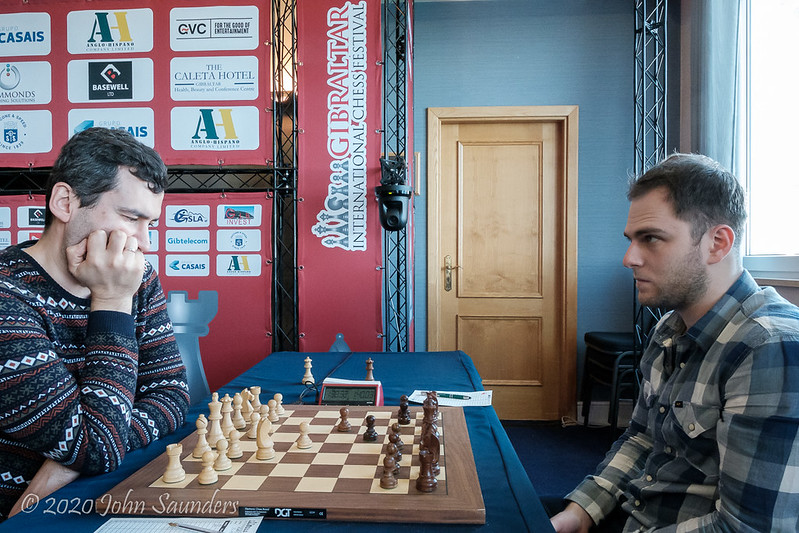 Kobalia-Yuffa was an interesting encounter

Kobalia-Yuffa had a lot more going for it. Kobalia emerged from a Sicilian with a slight edge but a mistake on move 28 saw the advantage switch to his opponent after a clever pawn sacrifice. Another indiscretion on move 32 made things a lot worse for Kobalia. But the way to exploit Black’s edge was perhaps easier for computers to figure out than humans. Yuffa lost his way and the game was drawn. But there is no doubt it was a well-contested game.

I now have to burrow down to game 16 to find anything other than draws to write about (not all the intervening games were lifeless but it’s still hard to work up much enthusiasm for them). Bela Khotenashvili fell behind in the race for the top women’s prize by losing to Mustafa Yilmaz. It was a long, painful loss from her side of the board, but credit to the Turkish GM for accurate technique. Meanwhile Zhansaya Abdulmalik increased her score to 5½ by drawing steadily with SL Narayanan of India. Tan Zhongyi, winner of last year’s top women’s prize, matched Zhansaya Abdumalik’s score by beating Maksim Chigaev’s King’s Indian Defence (boo!). It has to be admitted that this was rather a typical white strangulation of my favourite defence. We’ve all been there and it’s painful.

The plethora of draws probably just shows that the players are getting tired. The other way in which weariness manifested itself was in the number of oversights and outright disasters perpetrated by those players lower down the pairings who are still trying to push hard, only to ruin their positions with a blunder. There were at least two examples of this. Iozefine Werle, rated only 2271, has been having an excellent tournament and she seemed close to winning against GM Denis Kadric before losing the thread of the game, and eventually the game itself. That was tragic, but you wouldn’t expect this from a legend of the calibre of Vassily Ivanchuk. I always feel bad about annotating a game in which a great player has failed so spectacularly but in many ways this was the story of the round as players (not just Ivanchuk) started to grow weary. Maybe the tournament should introduce a rest day – and do away with the bye rule. 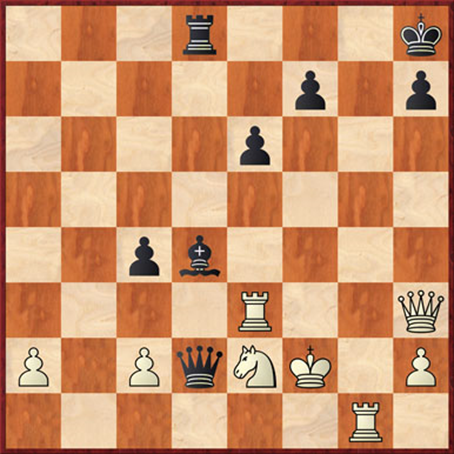 Let’s hope for more inspiring chess tomorrow. Round 9 takes place on Wednesday 29 January at 3pm Central European Time (GMT+1) in the Caleta Hotel, so do tune in for the live broadcast conducted by GM David Howell and WIM Fiona Steil-Antoni here.