A third successive draw for one of the co-leaders, Hikaru Nakamura, and a loss for the other, David Howell, contributed to a four-way traffic jam on 6½/8 after the eighth round of the Tradewise Gibraltar Masters at the Caleta Hotel on Tuesday. With two rounds remaining the leaders are Hikaru Nakamura (USA), Richard Rapport (Hungary), Maxime Vachier-Lagrave (France) and Daniil Dubov (Russia). The leader in the race for the top women's prize is now Nino Batsiashvili (Georgia) with 5½, having leapfrogged over Ju Wenjun (China) and Kateryna Lagno (Russia) who both lost.

Wang Hao-Nakamura produced another muted performance from the four-times titleholder. Wang Hao had enjoyed a half-point bye in the seventh round and might have been expected to push harder. The Berlin defence from Nakamura may have been something of a surprise: unless I missed something on my database search he's only played into this line in a handful of blitz and rapid games. The game left book on move 11 and then the players steered for a repetition, ending on move 19. Perhaps Nakamura is keeping something in reserve for the big push in the final two rounds, plus a possible tie-break. 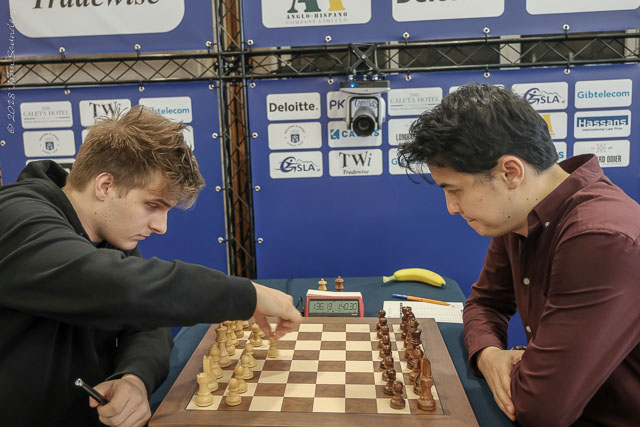 In Rapport-Howell White built steadily on his opening initiative and Black was first pushed back and eventually overwhelmed by an advance of the f and e-pawns. Rather a depressing game for the English player but fine technique from the young Hungarian player who thus joined the leaders.

Oparin-Aronian was a draw not unlike that Wang Hao-Nakamura though with a brief tactical flourish which briefly promised greater things before the inevitable repetition. Nigel Short commented later at the Question and Answer session that Aronian tends to be solid with Black, which is less suited to the milieu of open events than it is to elite competitions, since in Swiss events players need to push hard for decisive results with both colours. But he's only half a point off the speed and well within range still. 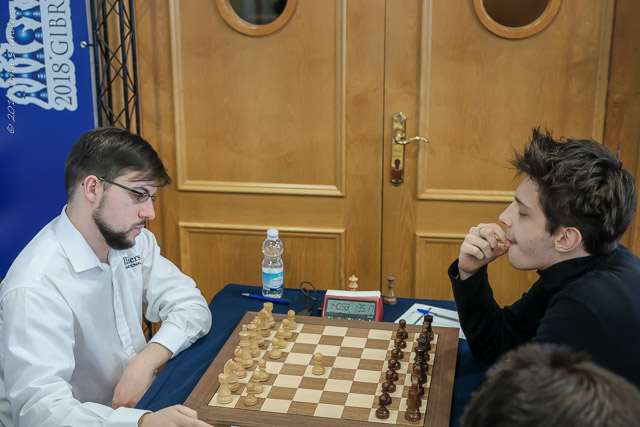 Maxime Vachier-Lagrave was paired with a French colleague and friend Jules Moussard but there were no old pals' acts on offer today as MVL needed the point. The queens came off early but the number two seed nursed a small edge and then won a pawn. It was still not easy but he nursed his advantage to its conclusion on move 65.

Daniil Dubov completes the quartet of players on 6½/8. He beat his fellow countryman Mikhail Antipov who had proved so resilient up to this point. Black's 11...b6 was the first new move. Dubov soon exercised a strong positional grip on the game, strong-pointing c5 on the queenside and advancing his pawns on the kingside. Antipov countered effectively but then overlooked a positional trick starting with a queen exchange and then 35.e4, enabling Dubov to reach an endgame where his bishop outgunned Black's knight and, more importantly, the black king was hemmed in on g8 with little hope of escape. Dubov won a pawn and almost immediately after the game when he found a way to force a king and pawn endgame. 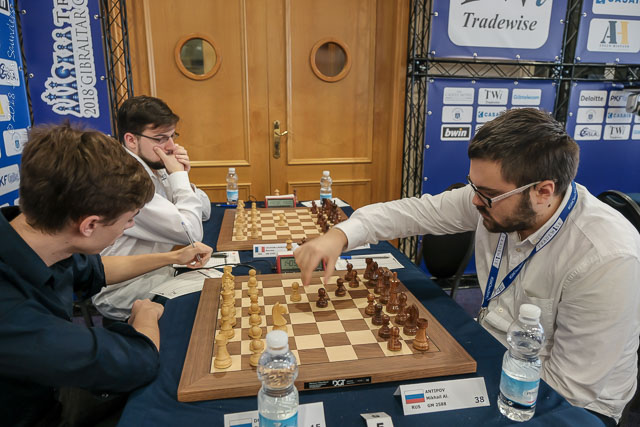 There isn't time or space to cover all the best games of the round – there were many excellent games – but I recommend readers play through the games Vitiugov-Gledura and Ju Wenjun-Gelfand which are well worth studying.

As we know Vassily Ivanchuk is a very mercurial player. I saw him an hour or so before this round standing alone and gazing out to sea a few hundred metres along the coast road. Although yesterday's storm has largely abated, the sea is still a magnificent stormy sight, with large waves breaking over the rocks. As I passed Vassily I made some trite comment about the view ("beautiful, isn't it?") but he seemed to be in a trance and didn't reply. Back at the board, he still seemed in a dream-like state and played a poor game against Abhijeet Gupta. Credit to the winner for playing an aggressive game but sadly Chucky was away with the fairies this afternoon, taking no more than a few seconds for each of his moves from move 20 to the game's calamitous conclusion. 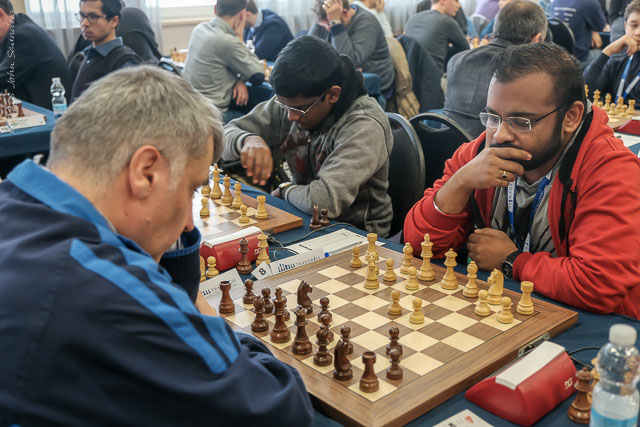 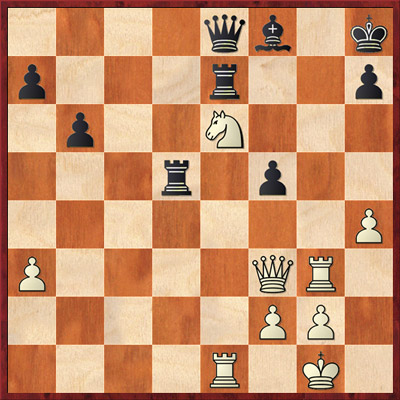 To finish, here's a little gem from the Challengers event. At first sight White has a vast material advantage – rook and knight and pawns versus only pawns – but look closer and you'll see a tricky cluster of passed pawns looming into view on the queenside rather like the iceberg that collided with the Titanic. Playing with little more than the ten-second increment, it was next to impossible for White to find a way to win, especially after his faulty 51st move, and he soon sank with all hands. But we must be grateful to White because in the process he unwittingly created a gorgeous 'White to play and win' endgame study which I tested on a couple of GMs (Stuart Conquest and Mickey Adams) before writing this report. They both found it quite challenging and needed a few minutes to figure it out. 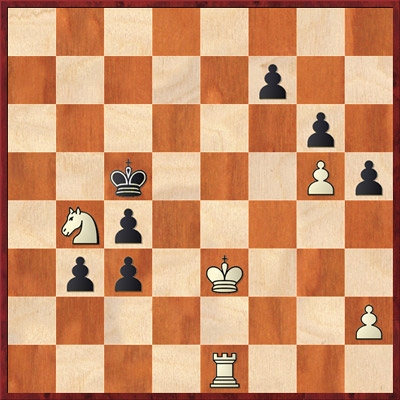 Three pawns are rarely a match for rook and knight (unless they are all lined up one move from promotion) but a player in the Challengers with not much time on his clock found them too hot to handle in the following tragi-comedy. 51.Nc2? 51.Na6+ and 51.Nd3 are both better choices to secure the win. The text wins but only if White follows up with a beautiful study-like move that few (if any) humans would have been capable of finding in the time available. I tested the position on two GMs (Stuart Conquest and Mickey Adams) and they both needed minutes rather than seconds to hit on the right plan. 51...bxc2 (Diagram) 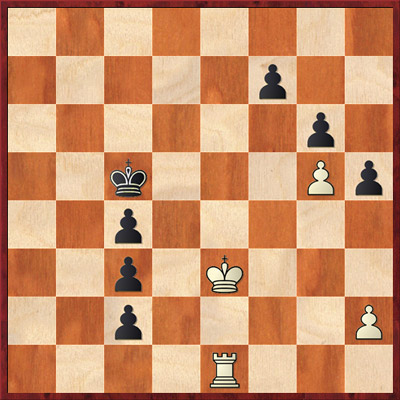 Now stop reading ahead and see if you can find the white win. It's very difficult so don't worry if you cannot do it.

If you plan to watch the last round (10) on Thursday, this is advance warning that play starts at 11am (CET) that day.

Play in round 9 starts at the usual time of 3pm (CET).

A selection of photos of round eight can be downloaded from the Flickr collections of John Saunders or Sophie Triay.

Video footage and interviews from today's round are available to view and/or embed from the Tradewise Gibraltar YouTube Channel.

Annotated games from this report