John Saunders reports: Round seven of the 2020 Gibraltar Masters took place on Monday 27 January 2020 at the Caleta Hotel. It was a case of ‘Hamlet without the Prince’ as the tournament leader, 17-year-old Russian Andrey Esipenko, was nowhere to be seen as he had taken a half-point and was presumably enjoying his rest day elsewhere on the Rock. I personally find the allowance of byes to leading players in the latter stages of a competition with major prizes on offer to be very strange indeed, but it’s allowed under the rules and there’s nothing more to be said. One of the players half a point behind the leader, Mikhail Kobalia (Russia), also opted for a bye in this round, so that left six players on five points to slug it out between themselves to see if any of them could catch the leader. Three of them managed to do so as all three games involving them were decisive. Wang Hao (China) beat Rameshbabu Praggnanandhaa (India), Parham Maghsoodloo (Iran) beat Alan Pichot (Argentina) and David Paravyan (Russia) beat Mikhail Antipov (Russia), which means that, going into round eight, the four leaders are Esipenko, Paravyan, Wang Hao and Maghsoodloo on 6/7. Behind them on 5½ are two Russian players, Daniil Yuffa, who defeated Krishnan Sasikiran (India), plus Mikhail Kobalia who took the bye. No fewer than 29 players are on 5/7, including the two leading women contenders Bela Khotenashvili and Zhansaya Abdumalik. 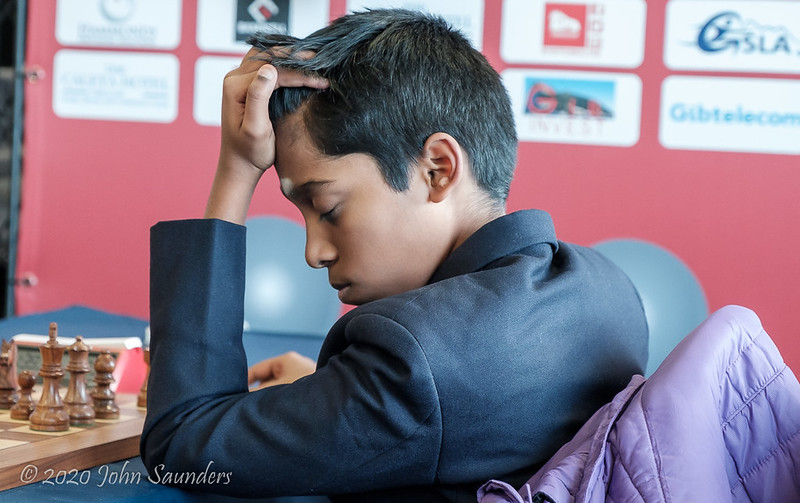 The excitement of beating Topalov in the previous round must have faded for Praggnanandhaa after he saw his pairing with Black against the redoubtable Wang Hao in round seven. It wasn’t so long ago that the Chinese super-GM headed probably the most impressive field ever assembled in a Swiss-paired event at the Grand Swiss in the Isle of Man and he’s very much on the up at the moment. It’s hard to identify precisely where the Indian youngster went wrong as he navigated the English opening reasonably well, but inexorably Wang Hao got a grip on the game. It came down to a rook and knight endgame in which Wang Hao had an extra pawn but with pawns on only one side of the board. But there was no question of a draw as Pragg’s knight was cut off from its colleagues and was eventually corralled into oblivion. 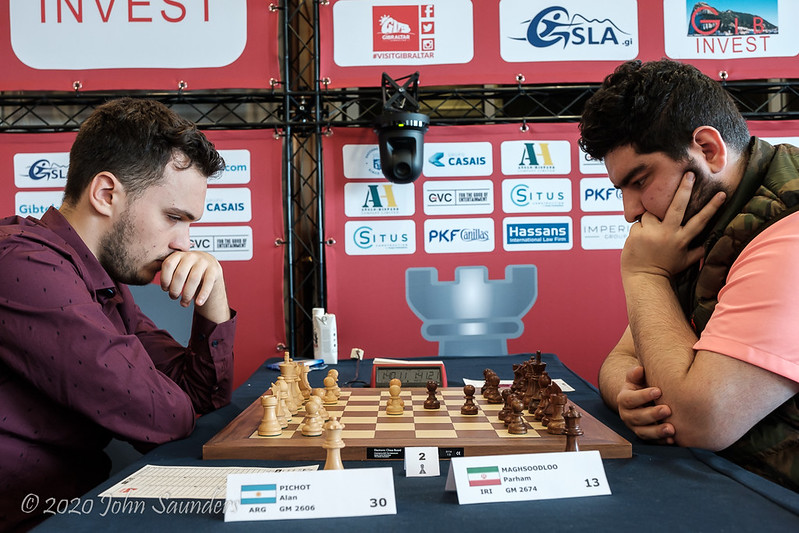 Maghsoodloo (right) was remorseless against Pichot

In some ways Pichot-Maghsoodloo was similar, in that the Iranian player impressed with his form and ability in the Isle of Man, the game featured no obvious mistake by the loser, and the process turned into a long but accurate grind by the higher rated player. Maghsoodloo defended a French and Pichot chose an unusual line roughly conforming to the Tarrasch variation. Pichot reached a decent position after around 16 moves but couldn’t find a convincing plan to move things forward. With pressure mounting, Pichot opted to sacrifice the exchange and the game liquidated to an endgame. Eventually, despite some determined and accurate defence by the Argentinian, Maghsoodloo found a way to reach a demonstrably won rook and pawn ending.

If the top two boards were tough (and they were), the all-Russian clash on board three was tougher still and went to 88 moves. (The third absent Russian, Esipenko, must have been delighted to see how hard his rivals had to work to catch him while he was out catching some Gibraltar sunshine.) The opening of Paravyan-Antipov contained a quirky idea. It went (Paravyan was White) 1.d4 Nf6 2.c4 g6 3.Nf3 Bg7 4.e3 0-0 5.Be2 d6 6.Nc3 Nbd7 and now 7.e4, thus reaching a standard (if slightly old-hat) King’s Indian Defence position but with Black to play. If I had seen someone play that in a 1960s schools match, I would have thought they were a patzer. Paravyan is definitely not a patzer but it’s hard to figure out the point of gift-wrapping a tempo and presenting it to the opponent in this way. It’s getting close to my bedtime so I’ll leave readers to work it out for themselves. 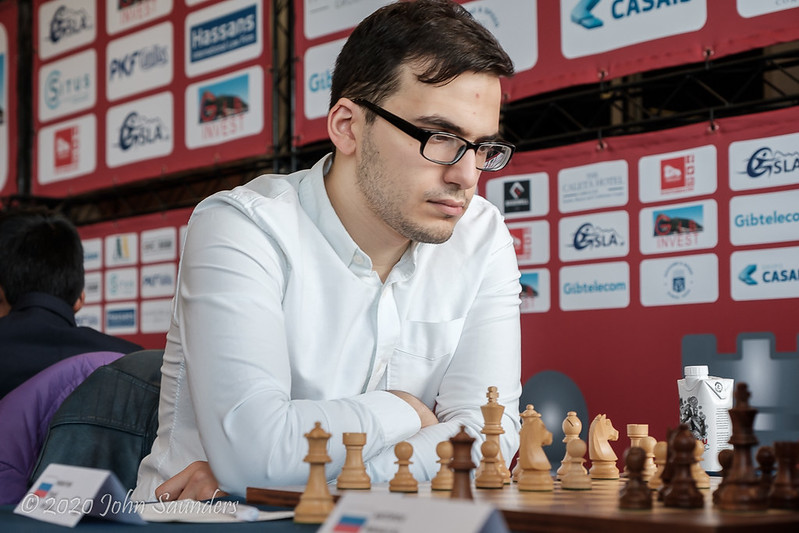 David Paravyan did it the hard way against Mikhail Antipov, but he got the job done

Incidentally, analysis engines won’t help much as they tend to think the King’s Indian Defence is rubbish anyway, and only lessen their numerical contempt for this line slightly when White wastes a tempo. True to KID form, the game proceeded with crenellated pawns locked across the board, with scant territory to be disputed other than the h-file from about move 30. Stockfish awards White a thumping great plus (+5.00 or more) from move 45 onwards but the means of making progress seems far from obvious to the organic chess player... 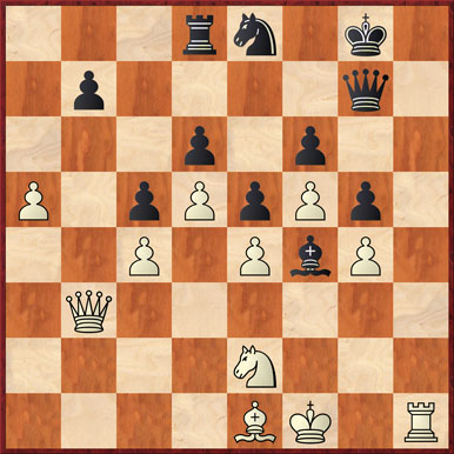 ... or maybe it is obvious... Paravyan could have created an h-file battery, with the rook in front of the queen, i.e. played Rh5, Qh3, Rh6 and Rg6, and it’s close to being all over. That looks very promising, doesn’t it? Paravyan didn’t do anything like this, instead shuffling around with his rook, repeating positions a couple of times, putting the queen in front of the rook on the h-file, and swapping queens. The game meandered on for another 40 moves but, despite making heavy weather of it, eventually White found a plan that worked and won the game.

The next batch of games were all draws, some more vigorous than others. MVL seemed content to play out a draw with last year’s second prize-winner, Murali Karthikeyan, who looks in good shape again this year. Sanal-Alekseenko also ended on the stroke of move 30 – a tell-tale sign of peaceful intent. Mickey Adams seemed to be getting slightly the better of Swiss GM Noel Studer but when one pair of rooks were exchanged the game rather petered out. Adhiban-Werle had some nice touches, with ‘the Beast’ sacrificing a pawn for play – it’s worth watching the Jan Werle interview – but the game ended with perpetual in 31 moves. Yuffa-Sasikiran hinged on a tactic on move 31. 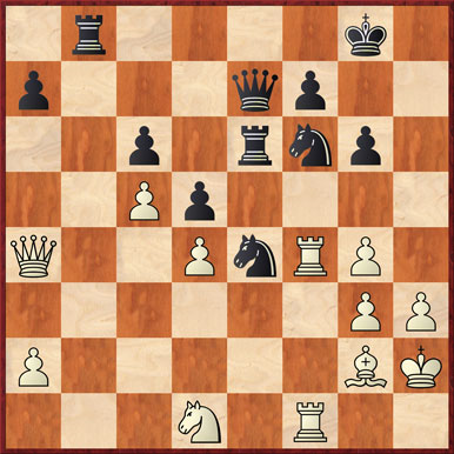 Bela Khotenashvili (Georgia) maintained her status as the leading contender for the women’s first prize by drawing with SL Narayanan (India), but it wasn’t easy. She defended a Caro-Kann but flirted with disaster in the middlegame, when her opponent obtained not one but two passed pawns on the seventh rank. Bela managed to keep both of these dangerous criminals under lock and key in the approved Nimzowitchian fashion but computer analysis shows a jail break could have been effected after which she would surely have suffered a lot more trouble than she did. Bela managed to eliminate one of the pawns and advance her own b-pawn to the seventh by way of retaliation, and that was enough to hold the balance. 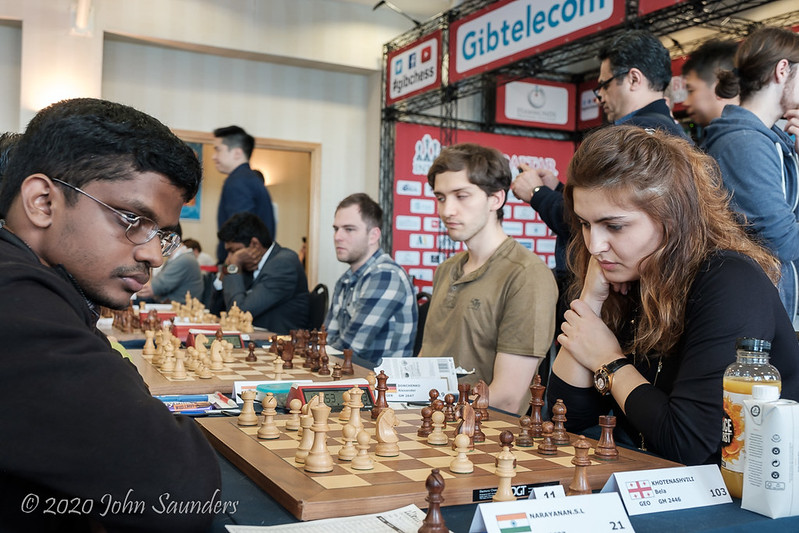 Zhansaya Abdumalik (Kazakhstan) did well to join Bela Khotenashvili on 5/7 by defeating the strong Indian GM Suri Vaibhav, who gave up a pawn in the opening but didn’t follow it up effectively. Zhansaya consolidated the extra pawn, and her two connected passed pawns on the queenside decided the game.

Round 8 takes place on Tuesday 28 January at 3pm Central European Time (GMT+1) in the Caleta Hotel, so do tune in for the live broadcast conducted by GM David Howell and WIM Fiona Steil-Antoni here.