Artemiev’s Shock Around the Rock

John Saunders reports: The tournament once again has a sole leader in the shape of 20-year-old Russian GM Vladislav Artemiev, who defeated Hikaru Nakamura on the top board in round seven, played on 28 January at the Caleta Hotel. This was Nakamura’s first classical chess loss at the tournament in ten years and makes it unlikely, though not impossible, that the American will add to his record tally of four Gibraltar titles this year.

Leading scores are Artemiev 6/7, followed by twelve players on 5½ – in descending rating order, Maxime Vachier-Lagrave, Levon Aronian, Yu Yangyi, David Navara, Arkadij Naiditsch, Nikita Vitiugov, Le Quang Liem, Maxim Matlakov, Ivan Saric, Nils Grandelius, Kirill Alekseenko and Rasmus Svane. The only players ranked in the top ten rated players of the tournament at the moment who do not appear in that score group are Wesley So and Hikaru Nakamura who are on 5, and Vassily Ivanchuk who is on 4½. The leading woman player’s score after round seven is Mariya Muzychuk’s 5, followed by her sister Anna and Ju Wenjun on 4½. Perhaps the two most remarkable names amongst the higher scorers at the moment are GM Dommaraju Gukesh, aged 12, and IM Raunak Sadhwani, aged 13, both from India, on 4½, with TPRs of 2650 and 2543 respectively. 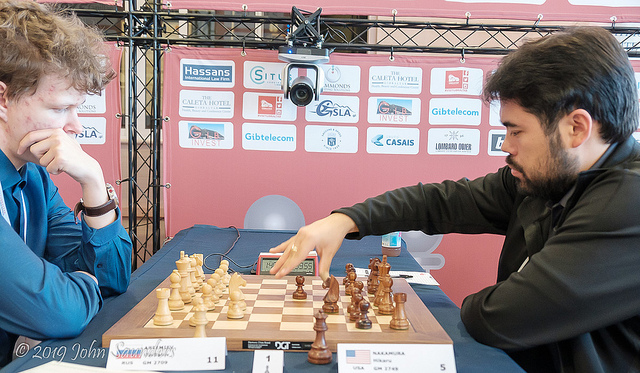 Artemiev’s success in downing Nakamura sent shock waves around the Rock. The game wasn’t too complicated until Nakamura launched a tactic to win a pawn but which left his kingside horribly exposed. Artemiev’s play to exploit the weakness was near faultless barring a diabolical computer move which might have saved Black but which any human player could be forgiven for missing. 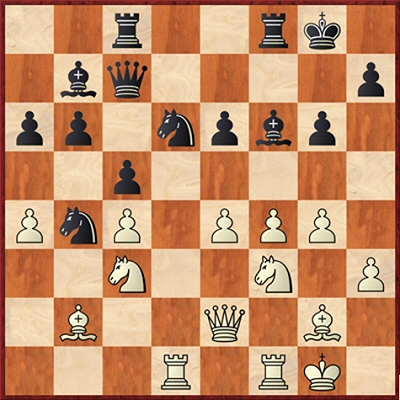 Round seven was almost as much of a bloodbath as round six, and the top-end draws were also extremely hard-fought. Ivan Saric pressed David Navara very hard on the second board but the Czech player managed to reach what for him was the safe haven of rook versus rook and bishop and drew in 87 moves. Grandelius-Le Quang was also a lengthy encounter in which the Swedish GM had all the chances that were going but couldn’t nail down his resourceful Vietnamese opponent.

Baskaran Adhiban attracted a lot of the early attention in the round when he flashed out a buccaneering Bxf7+ piece sacrifice in a hybrid Four Knights/Ruy Lopez, Bird variation against Yu Yangyi. Everyone was rooting for him playing in this romantic 19th century manner and he managed to get three pawn for the piece, but Yu Yangyi calmly refuted it and the beast was duly tamed. 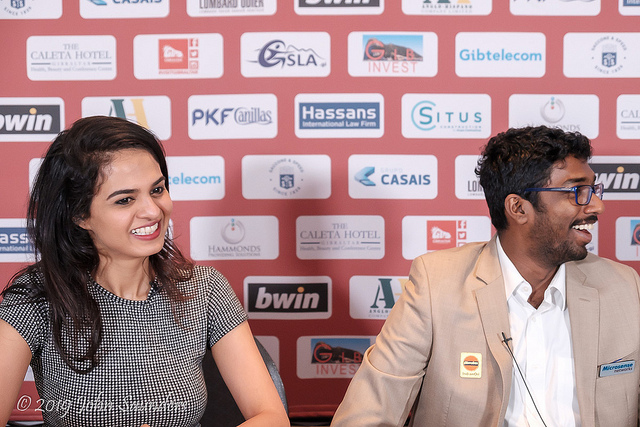 Adhiban didn’t let his loss get him down: he was back to his exuberant best at his master class with Tania Sachdev

Vachier-Lagrave-Tari was a Symmetrical English and the young Norwegian seemed to be doing OK until retreating a knight to an unfortunate square on move 15 and allowing his opponent more of an edge. Soon MVL won the exchange for a pawn and that was that.

Jaime Santos Latas played down to a level rook and pawn endgame against Naiditsch and one would have expected a draw but for the Spaniard locating his king on the wrong square on move 58, if Stockfish 10 is to be believed. Definitely one for the endgame connoisseurs, showing how an advanced pawn can make all the difference in otherwise level endgames.

Jumabayev-Vitiugov was an English Four Knights with a new move for Black occurring on move 11. White’s reply looked like a weakening of his pawn structure. Black trained his guns on the weakness and eventually squeezed his opponent into trying a desperate exchange sacrifice which didn’t work out.

Werle-Alekseenko is another game which will appeal to endgame fans. It came down to a knight and pawns endgame with the Dutch player slipping up on move 59 when he went the wrong way with his king, costing a vital tempo.

David Howell has bounced back from a dodgy start by winning three games in a row against female opponents. In round eight he has a chance to win the title (bestowed by me) of ‘tournament bully’ if he adds a 12-year-old child to his list of victims. But that child is Dommaraju Gukesh so it won’t be easy. With 5 points David now shares the honour of being the leading English competitor with Mickey Adams, who drew with Lalith Babu.

Mariya Muzychuk remains the leading female competitor by virtue of taking a half-point bye to reach a score of 5/7 and none of her rivals managed to make up the leeway. Sarasadat Khademalsharieh also took a time-out to reach 4½ while Anna Muzychuk achieved the same score via a draw with German IM Dennes Abel.

Dommaraju Gukesh continued his ascent by beating Venezuelan GM Eduardo Iturrizaga. Gukesh now has 5 points and a TPR of 2650. On the same score is the slightly older Indian IM Raunak Sadhwani whose victim was US GM Varuzhan Akobian. Raunak’s current TPR is 2543 but he has a chance to beat his third GM in a row in round eight when he plays Daniil Yuffa of Russia.