John Saunders reports: Round five of the 2020 Gibraltar Masters took place on Saturday 25 January 2020 at the Caleta Hotel. After the overnight leader, Ivan Cheparinov (Georgia), was held to a draw by Veselin Topalov (Bulgaria), we now have five players in the leading score group on 4½/5. The other four are Wang Hao (China), Parham Maghsoodloo (Iran), Andrey Esipenko and David Paravyan (both Russia).  There are 12 players on 4/5, including fourth seed Veselin Topalov. The two joint favourites, Shakhriyar Mamedyarov (Azerbaijan) and Maxime Vachier-Lagrave (France) are amongst those on 3½. The leading female competitors are Nataliya Buksa (Ukraine), Bela Khotenashvili (Georgia), Zhansaya Abdumalik (Kazakhstan) and Anna Muzychuk (Ukraine) on 3½ points. The round was followed by the now traditional Battle of the Sexes, with the Gentlemen’s team winning against the Ladies by a score of +2, =0, -1, though it has to be said that it is the men’s calamitously short loss in the first game which will live longest in the memory. 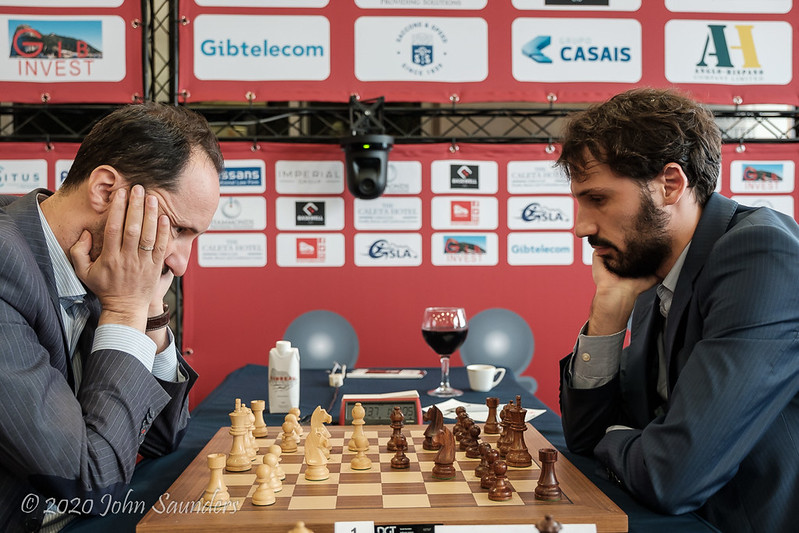 I confess I was expecting the Topalov-Cheparinov game to be less hard-fought than it was. This was a genuine battle between the two Bulgarians (though the younger man currently plays chess as a Georgian), with Topalov pressing hard for the advantage, but his efforts were neutralised by the tournament leader.

That left the door open for rivals to catch Cheparinov, which four of them managed to do. Wang Hao played a French Defence against Vasif Durarbayli, who opted for am innocuous Tarrasch line. The Azeri player secured the advantage of two bishops for a rook, which sounds good on paper but in this instance left him with considerable practical problems to solve. In the complications he miscalculated a tricky tactical sequence allowing Wang Hao’s powerful rook pair to mop up three pawns and secure the win. 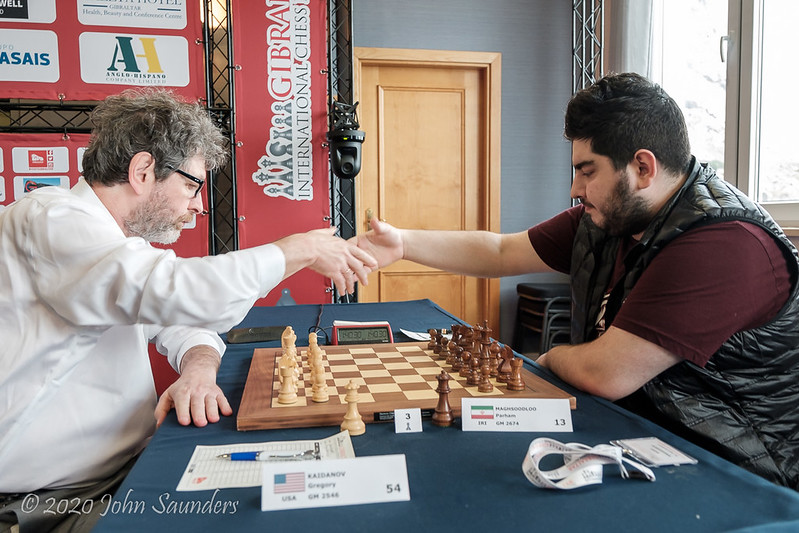 Gregory Kaidanov and Parham Maghsoodloo start their game with a handshake

There was another win for Black as 19-year-old Iranian star Parham Maghsoodloo overcame the 60-year-old Gregory Kaidanov. The US veteran looked in good shape in the opening but made an unnecessary decision to give up his big centre after which the initiative crossed to his youthful opponent who gradually outplayed him. 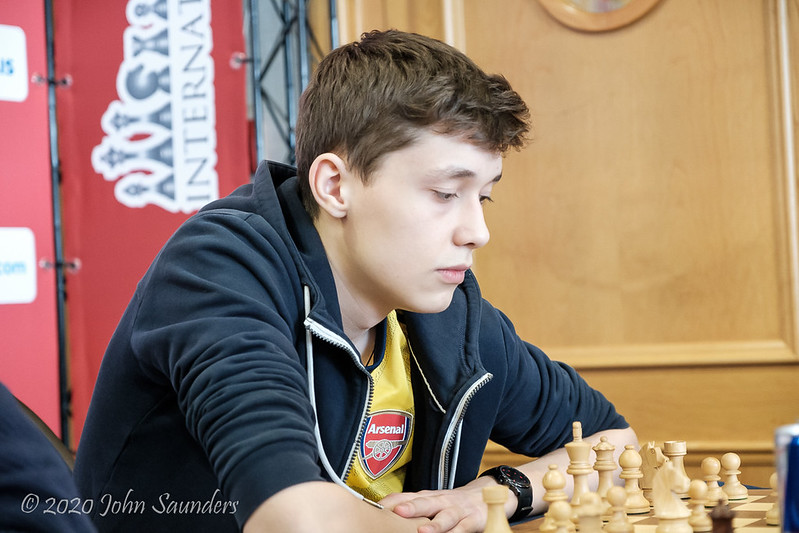 Andrey Esipenko (and Arsenal supporter?) joined the leaders with a win over Pier Luigi Basso

Andrey Evgenyevich Esipenko looks even younger than his 17 years. He played here in 2018, making a creditable 6½/10 as a 15-year-old. His boyish looks put one in mind of the young Karpov and his play is not dissimilar. The queens soon disappeared from the board and a very positional game ensued. Black, Italian GM Pier Luigi Basso, slipped up when he allowed Esipenko to swap knight for bishop, though it didn’t look obvious that it was wrong at the time as Black had what looked like a dominating knight. Esipenko played all round the d5 knight and showed that his bishop was ultimate the more useful piece. It came down to RPP v RP on one side of the board but the young Russian was soon able to demonstrate a win. 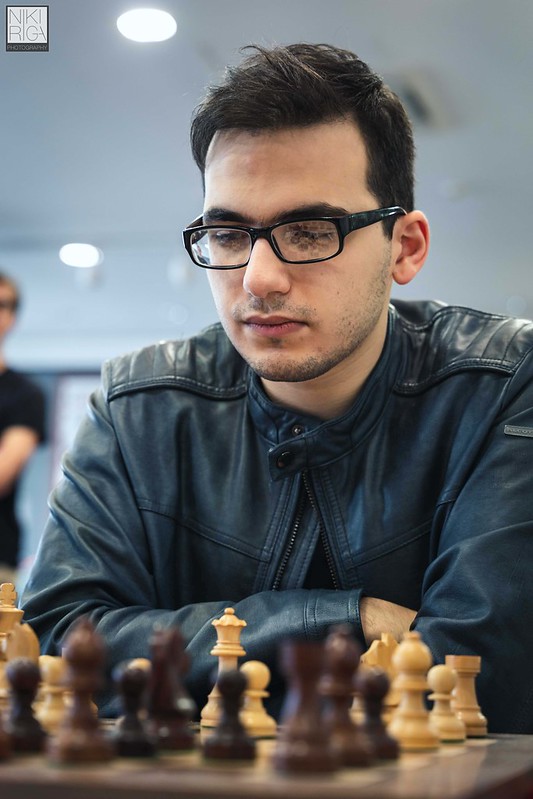 David Paravyan is another talented Russian GM, aged 21, from Moscow. He played a Ruy Lopez against the Argentinian GM Leandro Krysa who had stood firm against mamedyarov in the previous. It was a game in which knights generally dominated bishops, and the Russian found a neat conclusion involving a bishop sacrifice. 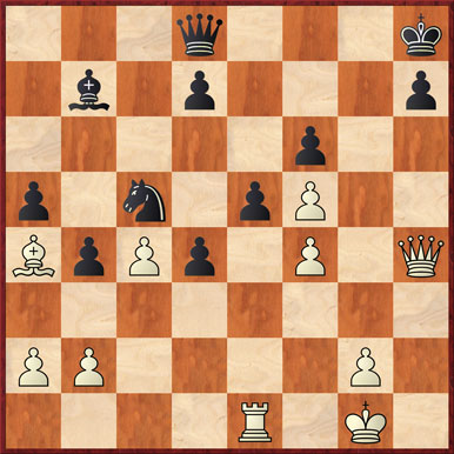 Black probably relied on winning a tempo here, after which his defence looks reasonably secure, but White calculates a piece sacrifice which wins almost immediately. 37.fxe5! Nxa4 38.exf6 Qg8 39.Re2 Calmly defending against the mate threat. 39...d3 40.Qd4! 1‑0 It is mate in no more than four moves. If Black plays 40...Qf7 then 41.Re8+ is a killer. 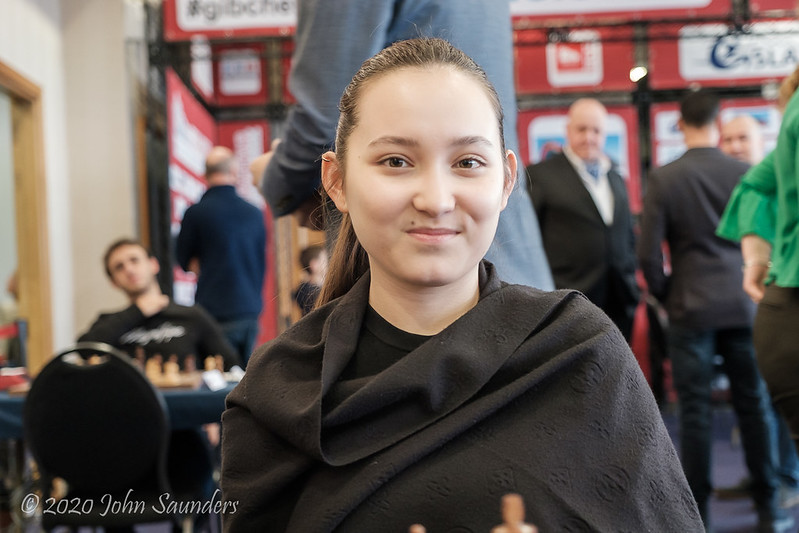 Zhansaya Abdumalik maintained her challenge for the top women’s prize with a steady draw with Black against Turkish GM Mustafa Yilmaz to reach 3½. Bela Khotenashvili did the same by the easier stratagem of taking a half-point bye. Nataliya Buksa got back into contention for the £20,000 prize by beating the young Turkish GM Cemil Can Ali Marandi. Things weren’t promising for Nataliya as Black had a chance to win the exchange against her, but her opponent unaccountably opted not to take it. Thereafter the advantage swung to White and Nataliya’s connected passed queenside pawns rolled inexorably to victory. Anna Muzychuk gained a pawn against Bhakti Kulkarni and proceeded smoothly to a win. She and Zhansaya are taking byes in round six so it will be left to Bela and Nataliya to see if they can take advantage of their co-leaders’ absence.

The Battle of the Sexes VIII

As is now traditional, the middle Saturday night of the Gibraltar Festival features the Battle of the Sexes match between six-player teams of top men’s and women’s players on a giant set in the hotel restaurant. This year, with the usual men’s captain Nigel Short thousands of miles away in Vladivostok having just completed a stint commentating on the women’s world championship match, there was to be a new team supremo in the shape of MVL, while the women’s team was led by former women’s world champion Antoaneta Stefanova as usual.

This annual encounter, now in its eighth iteration, has already generated its own culture and it has to be said that the norms that apply to the match may shock those of you who cling fondly to the old-fashioned notion that the laws of chess should be strictly adhered to. If you are of a nervous or shockable disposition, I suggest you skip the rest of this article as I cannot guarantee that it won’t make reference to instances of article 12.1 of the laws of chess (“The players shall take no action that will bring the game of chess into disrepute”) being infringed.

This year’s match was given a Moroccan theme. The menu, the music and the cabaret shared a Moorish flavour and were all quite delicious. Marta the belly dancer got us off to a pulsating start, and I had difficulty holding my camera steady as she twirled around the dancefloor. She was joined by tournament director Stuart Conquest who is no slouch on the dance floor himself (there are YouTube videos to prove it). Between the second and third games, we enjoyed a couple of Sinatra songs expertly performed by Justus Werle, who happens to be the father of Dutch GM and 2008 European Union Champion, who is playing in the Masters, as is his wife Iozefine. 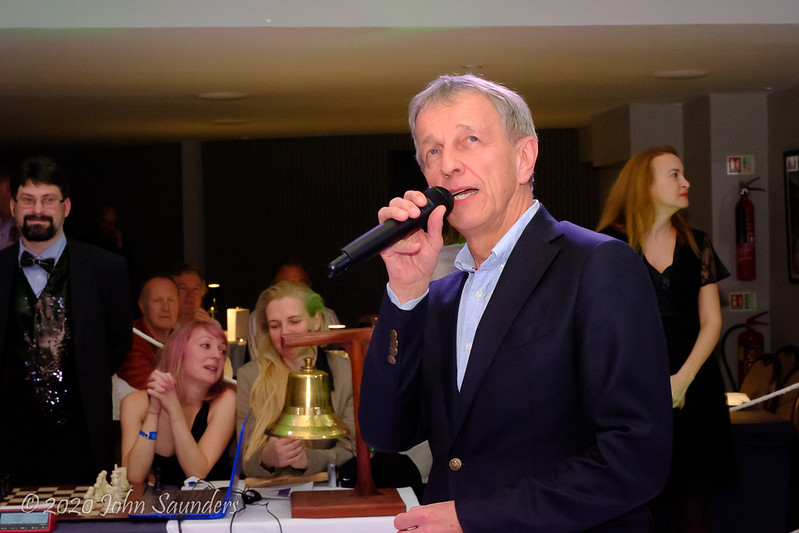 “That’s why the lady is a tramp!” Justus Werle (father of GM Jan) warms us up with some Sinatra classics

Turning reluctantly to the chess, as the late and much-loved English chess journalist Harry Golombek used to write: those of you who imagined that super-GMs cannot play quite dreadful chess will be shocked when I tell them what happened in the first game. The men’s team (consisting of Shakhriyar Mamedyarov, Kirill Alekseenko, Ivan Cheparinov, Mickey Adams, Parham Maghsoodloo and Alejandro Ramirez, in playing order) perpetrated the following idiocy, playing Black: 1.e4 e5 2.Nf3 Nc6 3.Bc4 f5 4.d3 fxe4 5.dxe4 Nf6 6.Ng5 Qe7 7.Bf7+ Kd8 8.Ne6+ 1-0. 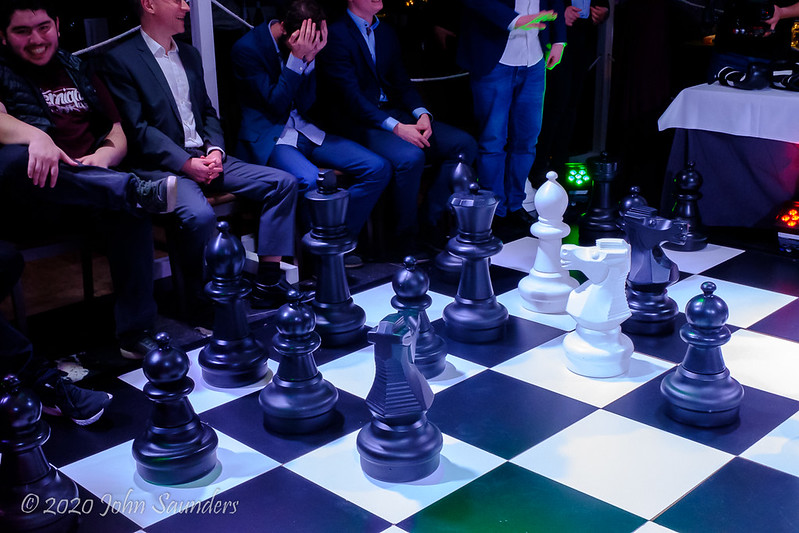 This was greeted by hoots of laughter from the audience and delighted squeals and celebrations from the women’s team (which, for the record, consisted of Anna Muzychuk, Zhansaya Abdumalik, Elisabeth Pähtz, Valentina Gunina, Nataliya Pogonina and Olga Girya, in move order). Note that the player responsible for the highly suspect 3...f5 was Ivan Cheparinov and this did not escape the attention of his ruthless match captain. Noting that the player in question was married to the opposition captain, non-playing captain MVL gave his team a severe public dressing down, much in the same way that former captain Nigel Short used to do, denounced Cheparinov as a “double agent” and promptly sacked him from the team for the second match. If you think normal competition chess is tough, believe me, the Battle of the Sexes is even tougher. 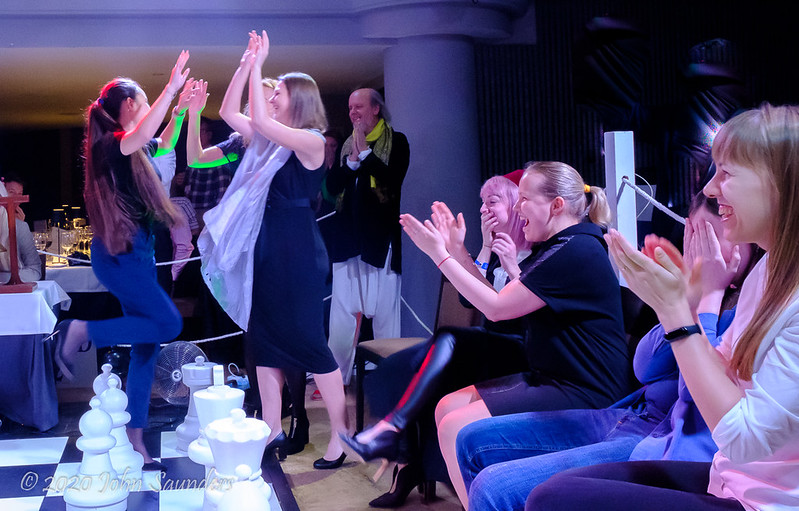 Zhansaya Abdumalik jumps in the air and celebrates with her team after delivering the crushing 8.Ne6+

Chastened by this humiliating experience, and after enduring a telling-off from their skipper, the men’s team knuckled down to some serious chess... what am I saying... they did nothing of the sort. Actually, it was quite an insight into the male psyche to be in close proximity to the team and overhear what they were saying to each other. You can see from the photos of the women’s team that they tend to work together for the common good and encourage each other, but I’m not at all sure that is true of the men’s team. They seem more focused on winding each other up or playing attention-seeking moves which will disorientate the next player to move in their own team. I noted one amusing incident. Alejandro Ramirez, getting to his feet to make his move and noticing that one of his colleagues had put him into difficulties with the previous move, turned round to appeal to his team and ask “what am I supposed to do?” – to which Mickey Adams responded “that’s your problem!” and the rest of the team simply laughed. 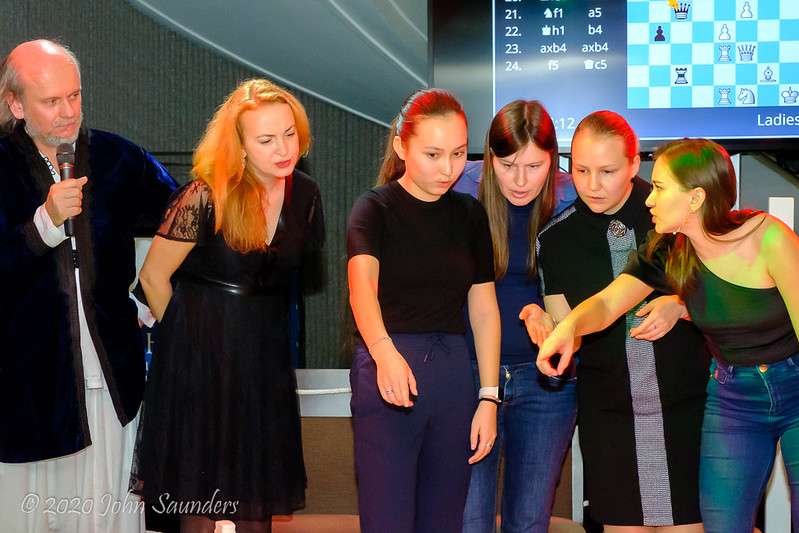 Having said which, I seem to recall that, back in the mists of time, there was a Battle of the Sexes competition rule that players weren’t supposed to collude on moves, so perhaps the men were playing by the rules and the women not. Who knows? It’s not a competition that sets great store by rules. Another thing I noticed was that mischievous Lizzie Pähtz, when rested from the six-player team, was sitting near the clock and pressing it for her team when they made a move. Very naughty! It reminded me that, a year or two ago, she sat on the clock so that the men couldn’t stop it when they had moved. During play* I pointed out Lizzie’s clock trickery to men’s team member David Howell. In many ways David has an older and wiser head than me, as he thought that it would be ‘ungentlemanly’ to object and best to turn a blind eye. I’m sure he’s right. (* it has since occurred to me that by mentioning this to David I myself might have been guilty of giving advice to a player under article 13.7 and could have been chucked out of the playing hall at this point. Probably just as well the arbiting is so laissez faire.) 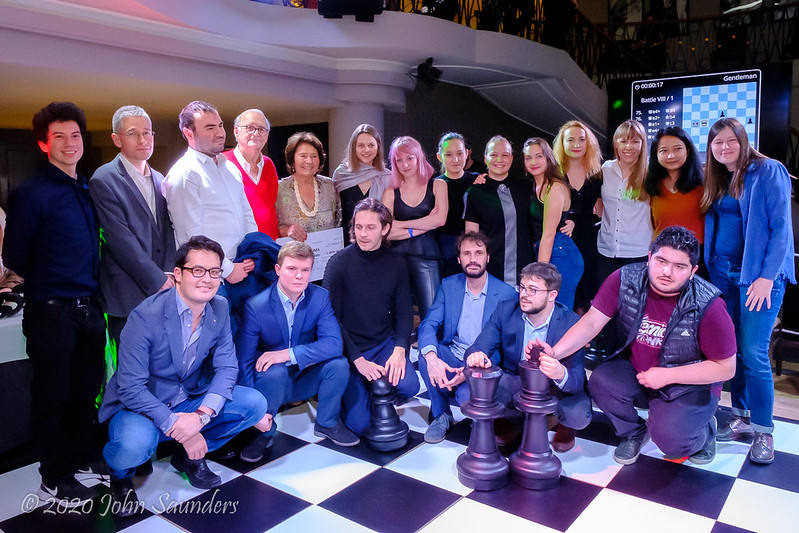 Well, anyway... it was all great fun. Somehow, despite the acute absence of team spirit shown by the men, they still managed to win the second and third games. And the event resulted in £1,000 for Shirley Callaghan’s chosen charity, so it all was in a good cause.

Round 6 takes place on Sunday 26 January at 3pm Central European Time (GMT+1) in the Caleta Hotel, so do tune in for the live broadcast conducted by GM David Howell and WIM Fiona Steil-Antoni here.