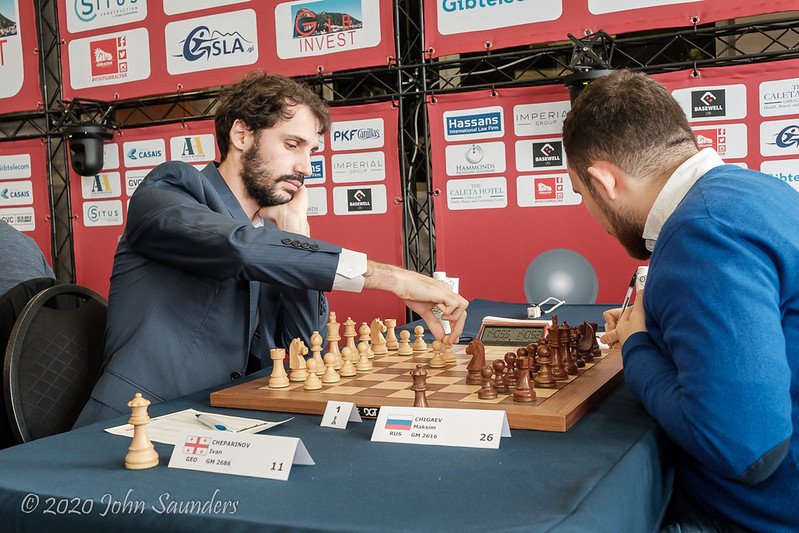 After his quick third round victory, Ivan Cheparinov quipped in the interview room that he was looking forward to his next visit there as it would mean he had won another game. The 2014 Gibraltar Masters winner only had to wait another 24 hours to do so and it came after another quickfire win, in just 30 moves. (He has played 108 moves for his four wins so far, an average of 27 moves a game). Cheparinov’s latest victim was Maksim Chigaev. This was the third Grünfeld he had been involved in, once again with an early h4 by White. “This opening maybe suits me,” as the man himself put it. This was a much happier outing for Harry the h-pawn in the hands of the genial Georgian/Bulgarian than it had been for his third round opponent. But it was arguably Eddie the e-pawn who scored the point in this game as he advanced, cut off Black’s pieces on the queenside from the defence and exposed his kingside dark-square complex for the fatal weakness that it was. A desperate pawn sacrifice was the only defence the Russian could muster but Cheparinov’s forces soon swarmed down the file vacated by the dear, departed Harry and it was all over. 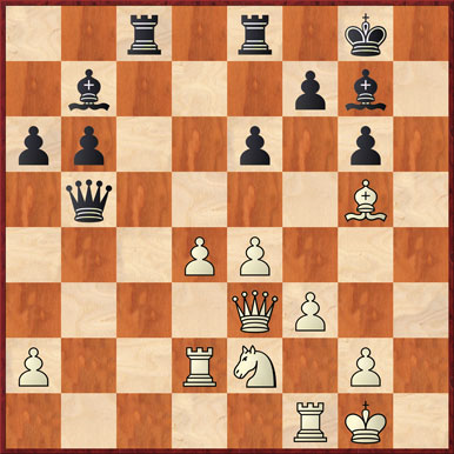 By this stage of the tournament, the star players are paired against seasoned GMs against whom they cannot necessarily expect to beat. Consequently, there were quite a number of draws on the top boards. Argentinian GM Leandro Krysa did well to hold a draw against joint favourite Shakhriyar Mamedyarov, rated some 250 points above him. He gave up his queen for rook and minor piece, and though the Azeri star seemed well placed to exploit a kingside initiative, Krysa’s dangerous d-pawn, a square from queening, held the balance and Mamedyarov was obliged to bale out for perpetual. Delhi GM Suri Vaibhav never looked in the slightest difficulty against MVL and the game soon petered out to a drawn double rook endgame. Pier Luigi Basso and Vasif Durarbayli were more closely matched in terms of rating and they played out a cagey draw. 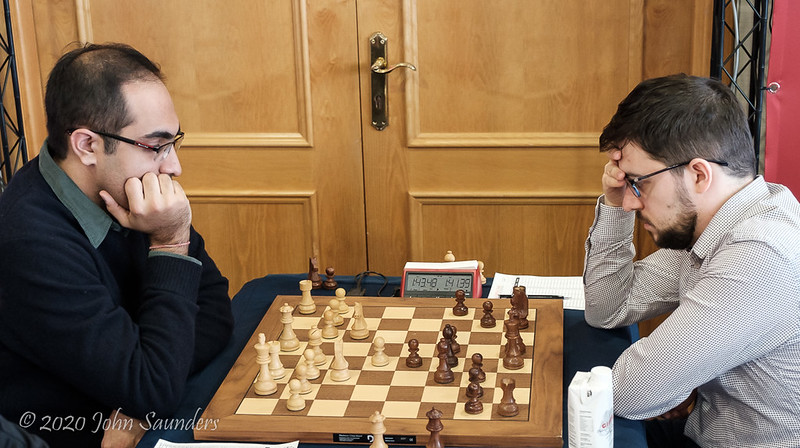 A couple of the top players managed to break down the opposition. Wang Hao defeated Jules Moussard from a position where the Chinese super-GM had queen for two rooks, but the Frenchman allowed him to capture his queenside pawns and he was always struggling thereafter. Veselin Topalov established a positional advantage against Jaime Santos Latasa but the attempt to address this by sacrificing the exchange for a pawn did not work out well for the Spanish GM. 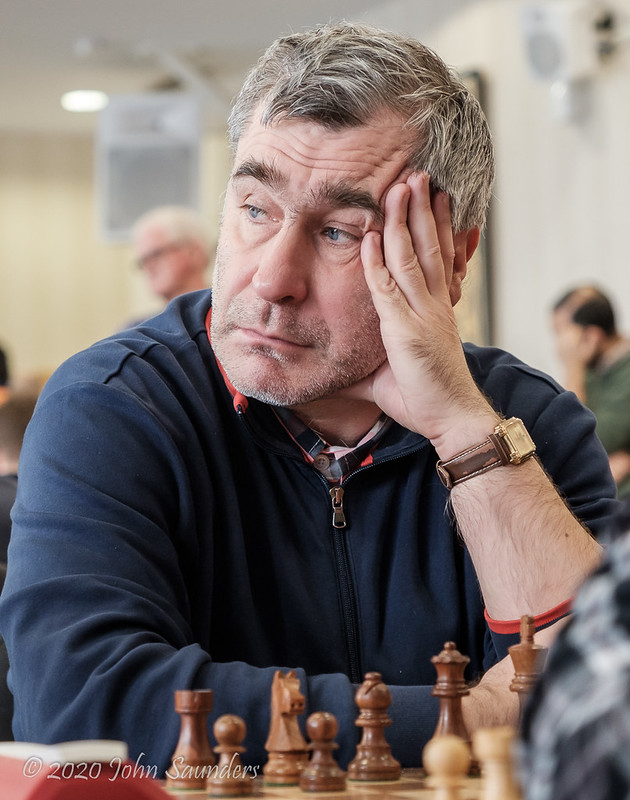 Ivanchuk looks out of sorts so far at this tournament

One leading player came a cropper. Vassily Ivanchuk, who had been lucky to get away with a draw in round three, was not so fortunate in round four. His opponent, Mikhail Antipov, played an unusual and seemingly innocuous line against Chucky’s Caro-Kann, but an untypically careless 14...b6 move allowed the Russian GM to grab the initiative and establish his minor pieces on powerful squares. Ivanchuk, like Santos Latasa, tried an exchange for pawn sacrifice, but abandoned it as a hopeless cause after only a handful of moves.

The race for the leading women’s prize is starting to become like a ‘Game of Thrones’ scenario. No sooner does a player rise to the top than they are skimmed off and are dispatched to oblivion. So it was for Nataliya Buksa, whose brief moment of glory was ended by David Navara. The Czech GM has now had three female opponents out of four and as always was eager to share the details with spectators in the interview room. Note, all player interviews are available on YouTube and you can find the link at the foot of this article. 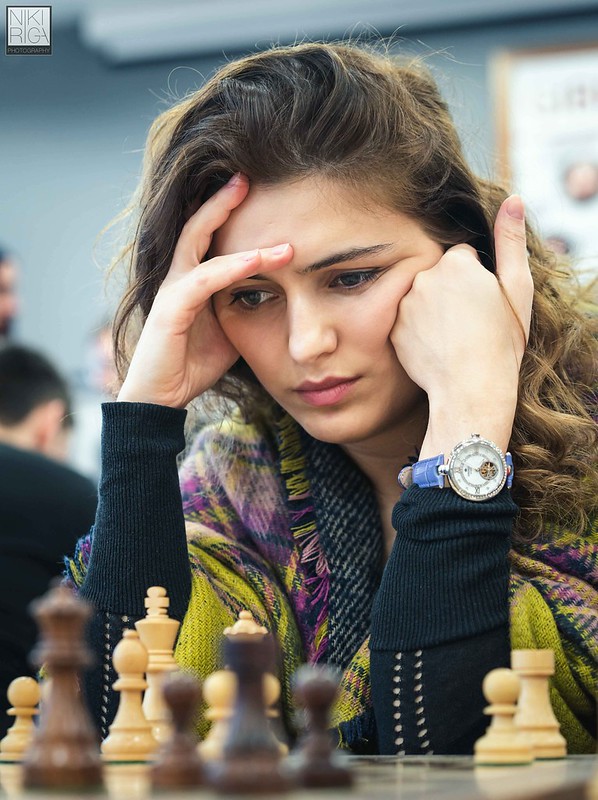 The highest placed female competitors are now Bela Khotenashvili and Zhansaya Abdumalik on 3/4. The Georgian player played a superb endgame to defeat Russian GM Dmitry Kryavkin in 76 moves. The Russian defended with a weird hybrid King’s Indian/Grünfeld involving a temporary pawn sacrifice, but it gave him a healthy edge and pressure against Khotenashvili’s weak c-pawn. But this was very much a game of two halves. The Georgian GM gradually turned the position around and thoroughly outplayed her higher rated opponent. Eventually the ugly duckling of an isolated c-pawn was transformed into a beautiful swan of a passed b-pawn. Thereafter Bela never gave her opponent a chance. It took a long time to achieve, but the final result was never in doubt. Zhansaya Abdumalik received a more friendly pairing against 2081-rated WFM Mireya Represa Perez and the rating differential soon made itself apparent on the board.

In the evening the players let their hair down and enjoyed the traditional Gibraltar team blitz event. Niki Riga’s beautiful photos tell the story of a fun event. The winners were the British and Irish Lions, for whom commentator David Howell scored 4½/5 on the top board, and IM Thomas Rendle made the same score on board four, with other team members Gawain Jones and IM Alex Lopez putting in strong performances. 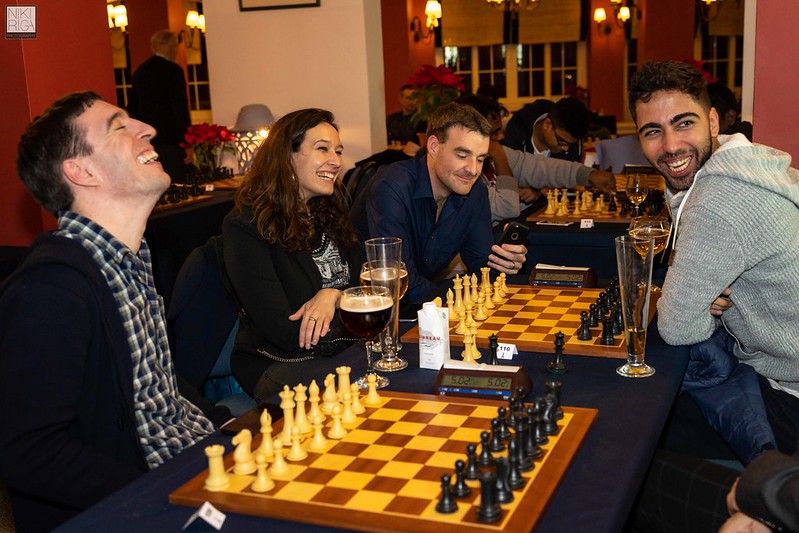 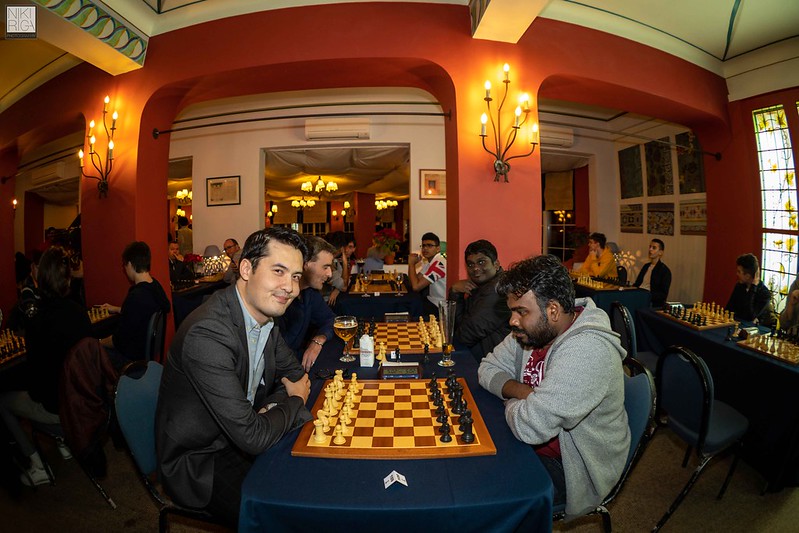 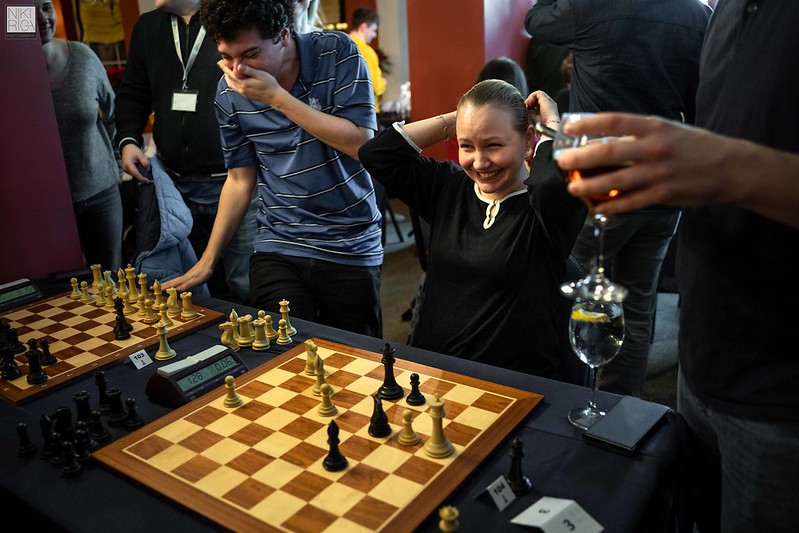 Valentina Gunina giggles as she delivers checkmate (as does Alejandro Ramirez) – but who was the victim?

Friday saw the final round of the two first-week subsidiary tournaments. Both were won with clean 5/5 scores. Challengers A was won by 68-year-old Canadian IM Leon Piasetski. (Who says chess is a young person’s game?) And Amateur A was won by Ashwani Kumar Grover, from Punjab, India. Amongst the second-placed players on 4/5 in the latter category was 16-year-old Gibraltarian Joseph Greco, so it was great to see some local success. The only player to defeat him was another local player, Anthony Farrell, who won the Gibraltar prize for the event with 3½. 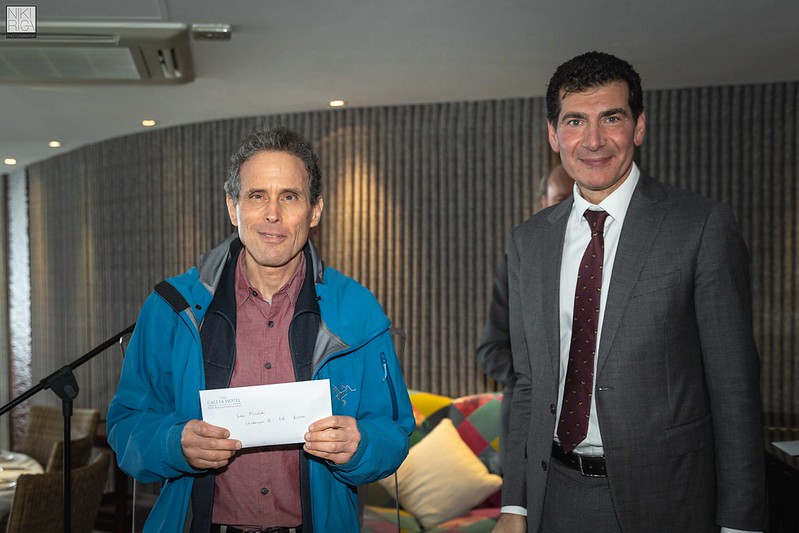 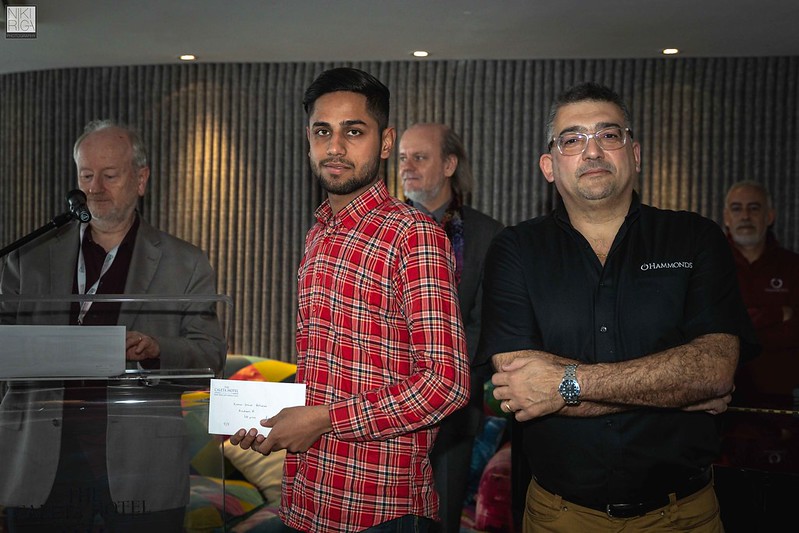 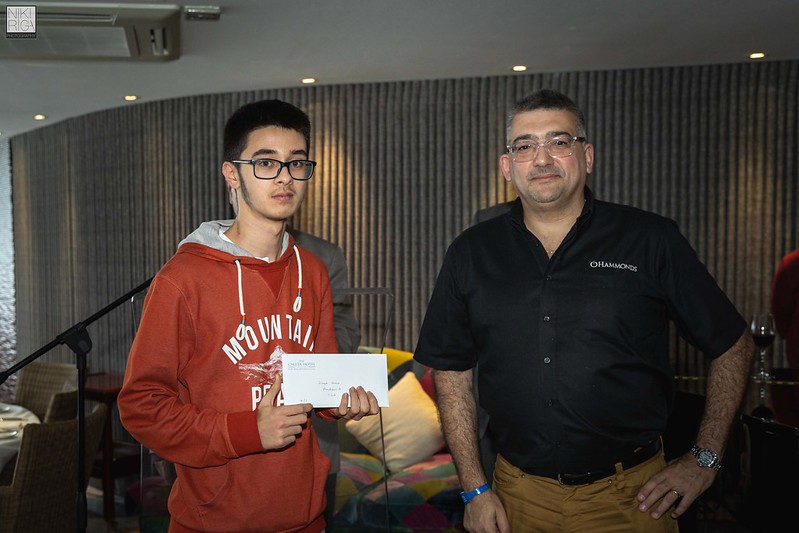 Round 5 takes place on Saturday 25 January at 3pm Central European Time (GMT+1) in the Caleta Hotel, so do tune in for the live broadcast conducted by GM David Howell and WIM Fiona Steil-Antoni here.