John Saunders reports: Round three of the 2020 Gibraltar Masters took place on Thursday 23 January 2020 at the Caleta Hotel. By the end of the round, the number of players sharing the lead on a maximum 3/3 had been whittled down to five: Ivan Cheparinov (Georgia), Vasif Durarbayli (Azerbaijan), Maksim Chigaev (Russia), Pier Luigi Basso (Italy) and Leandro Krysa (Argentina). The round was disrupted by a power cut which kicked in around two hours into the round and lasted for just over an hour. 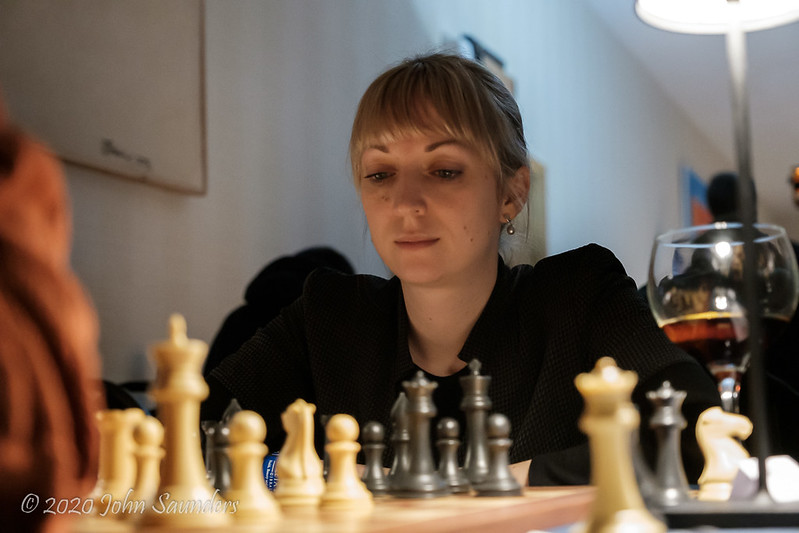 Lizzy of the Lamplight: Elisabeth Pähtz calmly continues her game during the power outage

Power outages are a fact of life all over the world and it’s not the first time we’ve suffered one here in Gibraltar. It affected a large part of the town and not just the venue. Of course, every cloud has a silver lining, and it has to be confessed that we photographers took full advantage as it gave us a chance to show off our creativity in low light situations, with the only illumination in some parts of the main playing hall being battery-powered lamps supplied by the hotel. I mentioned how much I enjoyed this photo op to chief arbiter Laurent Freyd during dinner later and he showed his excellent sense of humour by not killing me on the spot. 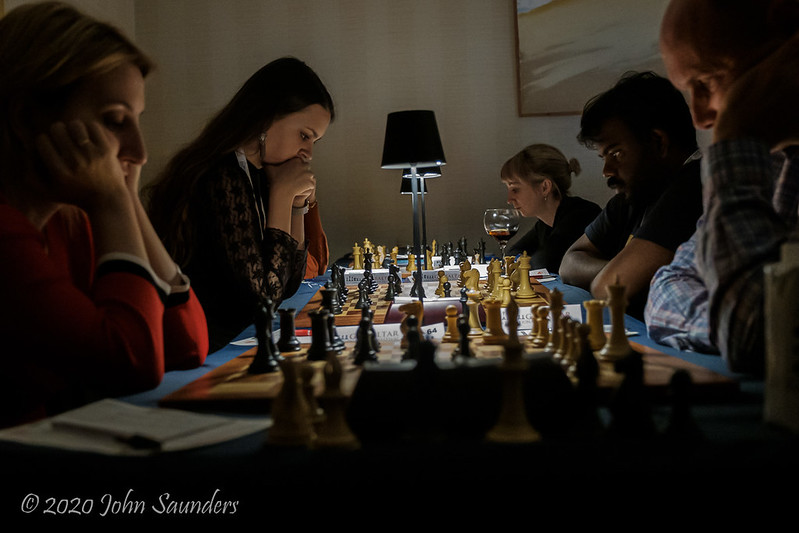 The areas of the playing hall furthest from windows were very dark indeed – but “the show must go on”!

It was a nightmare for the officials and perhaps even more so for our electronic board manager Matthew Carr who had to try and recover the situation on the vast array of boards after the power was restored, with players having played moves while the power was off. And, I nearly forgot to say, the outage was very disturbing for the players. I think some games were agreed drawn that might have gone on further but generally players accepted that it was a matter of force majeure and behaved accordingly. 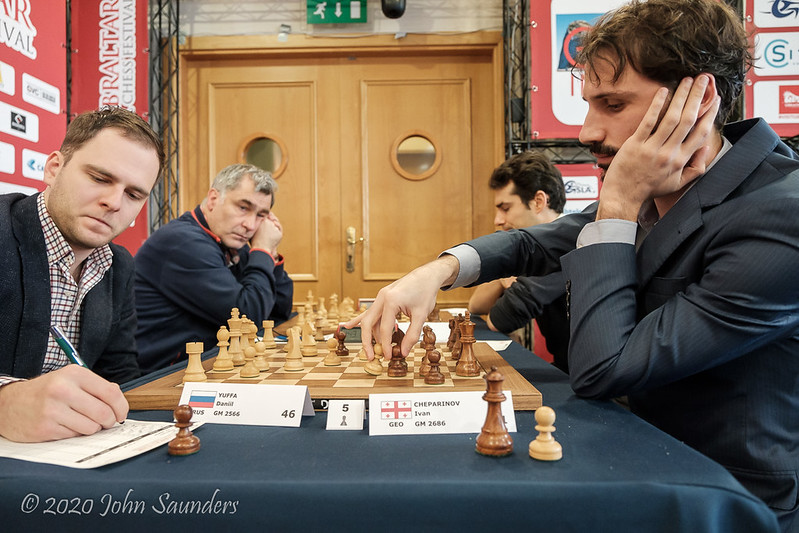 Ivan Cheparinov raced to a winning position against Daniil Yuffa before the outage happened and it wasn’t long after power was restored that he was in the interview room to talk to Tania Sachdev about his win. “I didn’t expect him to be so aggressive,” he said, commenting on Yuffa’s early h4 against his Grünfeld defence. Cheparinov only half-remembered his analysis and said he felt “very stupid” when his opponent played 12.Rxg4. However, he soon came to realise that this move was highly suspect, a view with which silicon concurs. Though Yuffa was able to play check and capture Black’s rook, and subsequently gain rook and two minor pieces for his queen, his position was so bad that it was obvious that Black was much better. Around move 18, the outage happened and Cheparinov had sufficient time on his clock simply to sit out the interruption and play the last few moves once the power was restored. 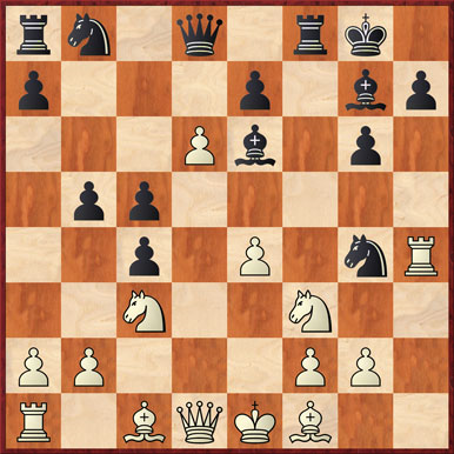 This was the only decisive result on the top ten boards. Chucky looked to be close to losing to Fernando Peralta but he may have been saved by the power outage, though the Argentinian still looked to be a lot better when the draw was agreed. Kadric-Alekseenko was a long, tough game with the Candidates’ qualifier on the ropes for much of it but he managed to find a perpetual when it came down to Q v QPP against the Bosnian GM. By contrast Mamedyarov settled for a very quick draw against Jules Moussard on the top board. 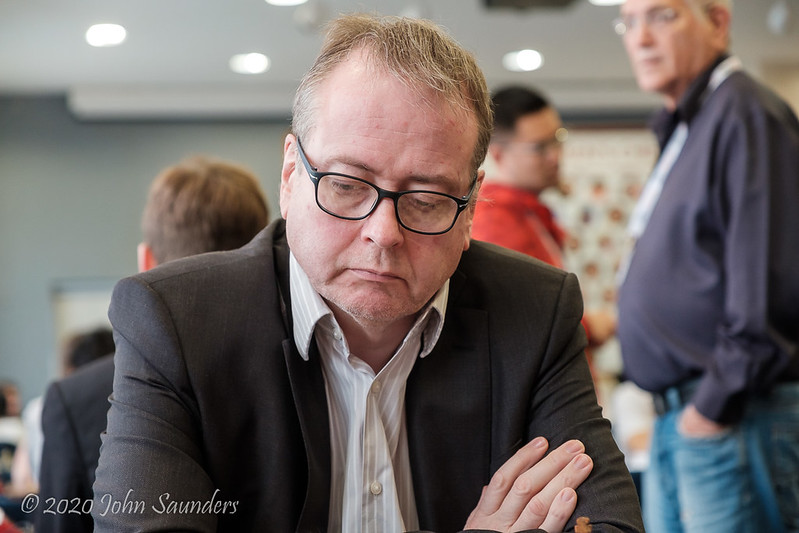 The 27-year-old Argentinian grandmaster Leandro Krysa, who is making his third visit to Gib, must have thought it was Christmas when the normally ultra-solid Russian Mikhail Kobalia castled into an attack which netted him two pawns. Maksim Chigaev played a Giuoco Piano against Johann Hjartarson. The affable Icelandic grandmaster, who memorably defeated Viktor Korchnoi in the 1988 FIDE Candidates’ competition, tried a direct attack on the white king’s position but his sacrificial play backfired and he soon lost. “I played like an idiot,” he said ruefully to me after the game.

Vasilios Kotronias shared first place with Nigel Short at the first Gibraltar Masters in 2003. In round three he played Black against the 27-year-old Azeri GM Vasif Durarbayli and the game was an even cut and thrust until move 46 when the the 55-year-old Greek GM made a fatal slip. He struggled for a while, but the damage was done. The fifth player to join the top group was the 22-year-old Italian GM Pier Luigi Basso who steadily outplayed Zhansaya Abdumalik of Kazakhstan. 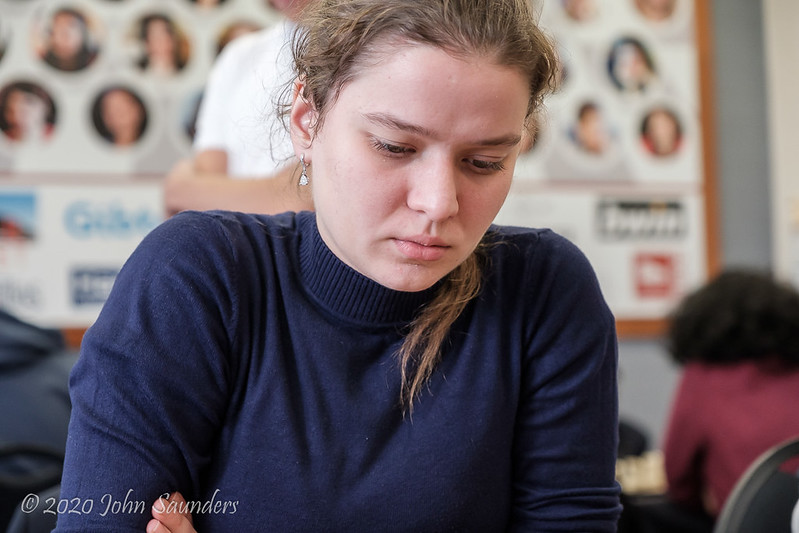 IM Nataliya Buksa of Ukraine leads the race for the £20,000 top women’s prize

The other leading woman player, Nino Batsiashvili of Georgia, also lost, though she was somewhat unfortunate to lose to Wang Hao. The new leader of the race for the £20,000 top women’s prize is 23-year-old IM Nataliya Buksa (Ukraine) who beat Swiss GM Noel Studer to join the group on 2½.

Round 5 takes place on Saturday 25 January at 3pm Central European Time (GMT+1) in the Caleta Hotel, so do tune in for the live broadcast conducted by GM David Howell and WIM Fiona Steil-Antoni here.