John Saunders reports: Round two of the 2020 Gibraltar Masters took place on Wednesday 22 January 2020 at the Caleta Hotel. By the end of the round, 33 players had reached the maximum score of 2/2, compsed of 31 GMs and two IMs. One of the latter achieved the most surprising result as 19-year-old Kazakh player, Zhansaya Abdumalik, overcame the younger but higher rated GM from Iran, M. Amin Tabatabaei. The other female to reach the maximum score was Georgian GM Nino Batsiashvili who beat GM Daniele Vocaturo. 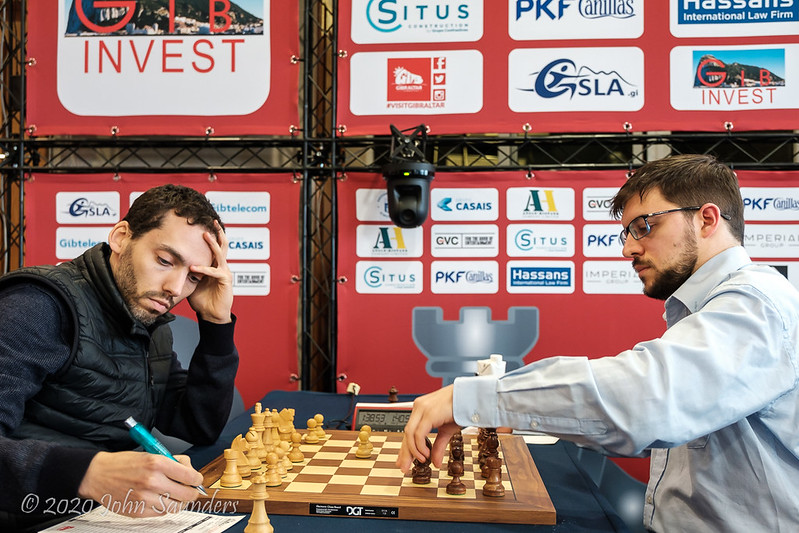 The two top rated players in the field experienced long, tough fights in the second round. Maxime Vachier-Lagrave needed all his endgame technique and tenacity to hold his fellow countryman, IM Gabriel Flom, to a draw in a rook versus rook and two pawn endgame. Complimentary on his endgame mastery by a fan on Twitter, MVL replied, “I’ve had good coaches in my life.”

The boot was on the other foot for Shakhriyar Mamedyarov, who toiled for some hours to overcome English GM Stephen Gordon. The denouement had some creative touches. 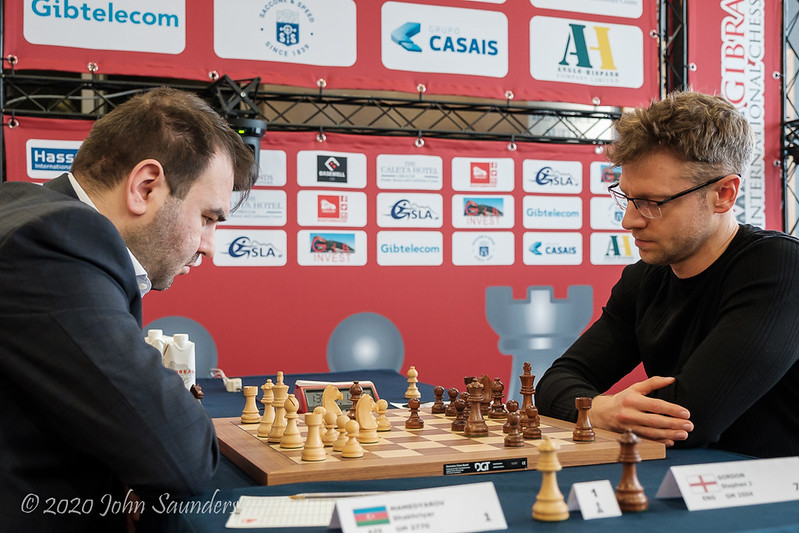 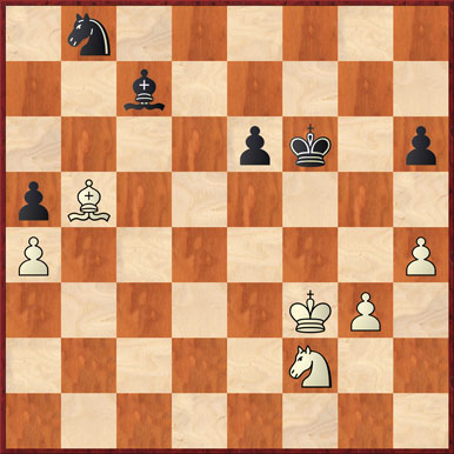 48.h5!? Engines don’t care for this move, and not many humans would think to play it, but it exemplifies how imaginative (and what a high-class trickster) Mamedyarov is. The pawn looks vulnerable to capture by the black king but Mamedyarov has laced it with a long-lasting poison of such toxicity that can hardly be credited. 48...Bb6 49.Ng4+ Kg5 50.Ne5 Bc7 Not falling for 50...Kxh5?? 51.Kf4! followed by 52.Be2 mate, which only the futile 52...Be3+ prevents. Mamedyarov is using this tactical trick to indirectly defend his h-pawn, but he’s not finished yet. 51.Ng6 e5 It’s more or less the same trap as before but with the merest hint of mate this time and in more temptingly attractive wrapping paper: 51...Kxh5? 52.Nf4+ Bxf4 53.Kxf4 – once again threatening mate in one, this time by Be8 – 53...Kg6 54.Ke5 and the white king strolls across the board unhindered to consume the stranded knight. However, it turns out that Black has an improbable antidote here with 51...Bd6!! when 52.Nf4 Bxf4 53.gxf4+ Kxh5 54.Ke4 Kh4!! and Stockfish tells us that Black can hold. I won’t pretend for a second I can explain why, even when led by the nose by the analysis engine, and this would be phenomenally hard for any human, let alone one as cerebrally and chronologically challenged as me, to figure out over the board. (54...Kg4 doesn’t work because of 55.Bc4!!, apparently, but once again it’s too far above my pay grade to explain why.) 52.Ke4 Kg4 The poison is still active: 52...Kxh5?? 53.Kf5 wins. 53.Nxe5+ Kxg3 53...Kg5 probably only postpones dinner. The g3-pawn is poisonous too, of course, and practically has a skull and crossbones sign etched into it, but Black probably wanted to end his suffering. 54.Kf5! The only move to win, but now the air has cleared a little, it is not quite so hard to find. 54...Kh4 55.Ng6+! 1‑0 One final offer of the deadly h-pawn is spurned and instead Black resigned. The black king is forced away from the action. 55...Kg3 (55...Kxh5? 56.Be2 mate) 56.Nh8! - an unusual situation where a knight going into a corner is the best move - 56...Kh4 57.Kg6 and suddenly it all becomes obvious how the knight will snaffle the h6-pawn and the white h-pawn will have a clear run through to promote or win the bishop.

Mamedyarov proceeded from the game to the broadcasting suite for a master class, chaired by Tania Sachdev. It was highly entertaining, with Shak demonstrating an amazing game he won against Loek Van Wely with the Budapest Gambit some years ago in a Spanish team event after going on a tremendous bender the night before and only getting to bed at 11am. Tania had a challenging job keeping control of the ebullient Azeri super-GM as he treated us to a mind-bending torrent of variations, whilst contrasting the sort of chess he plays when he’s had a few with when he’s stone cold sober. At one point Tania was tempted to issue a parental guidance warning. Perhaps I should do that now on her behalf... indulging in alcohol won’t make you a super-GM, readers. The good news is that the video of the master class is available on our website and comes highly recommended by me, with the proviso that under-18s should ask their parents’ permission before watching it. You might find it beneficial playing through the above game in the light of watching the master class. 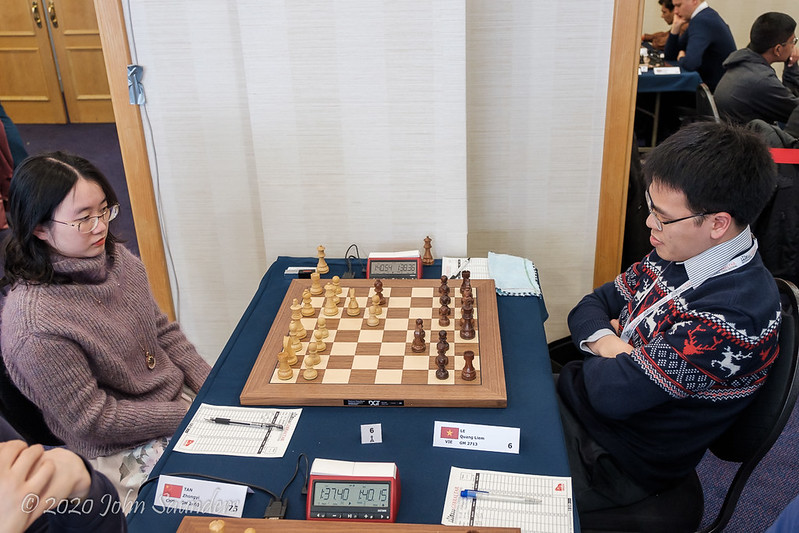 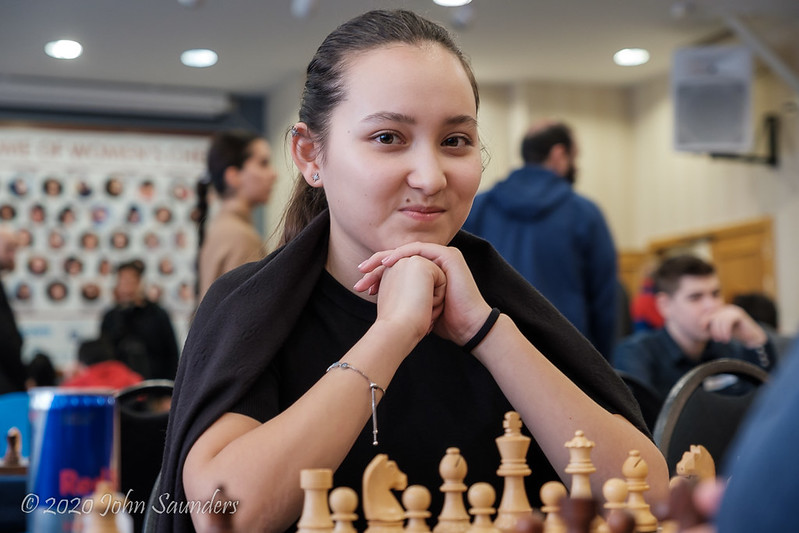 The biggest upset of the round occurred on board 16 where the 19-year-old Kazakh IM Zhansaya Abdumalik won with Black against the higher rated 18-year-old Iranian GM Amin Tabatabaei. The Iranian GM had early control of the position but, as in the Mamedyarov-Gordon game, this battle of the teenagers also turned on the capture of a poisoned h-pawn. Zhansaya already has three valid GM norms so this win will be a useful contribution towards the 29 more rating points she currently needs in order to clinch the title. 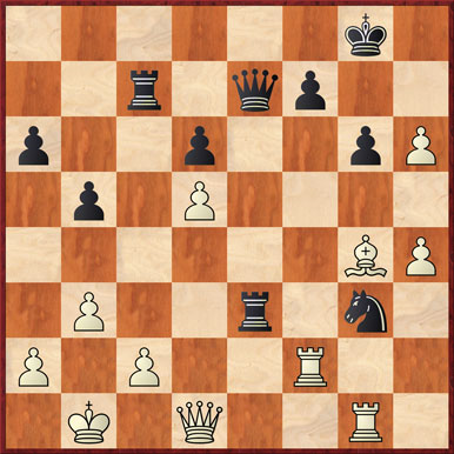 There is a second female player in the group on 2/2, namely GM Nino Batsiashvili who defeated the Italian GM Daniele Vocaturo, also with Black. The Italian attempted to breath life into the game with an exchange for pawns sacrifice which didn’t look so bad in itself but his position started to become problematical after the exchange of queens. It was a long and tricky process but Nino’s rook eventually outmanoeuvred Daniele’s bishop to win.

Round 3 takes place on Thursday 23 January at 3pm Central European Time (GMT+1) in the Caleta Hotel, so do tune in for the live broadcast conducted by GM David Howell and WIM Fiona Steil-Antoni here.