John Saunders reports: 21-year-old Russian GM David Paravyan, virtually unknown outside Russia until his arrival in Gibraltar and ranked only 22nd in a stellar field, stunned the chess world by winning the £30,000 first prize in the Gibraltar Masters after winning a tie-break against one of the favourites, Wang Hao, at the Caleta Hotel on Thursday. The tournament ended in a seven-way tie for first on 7½/10 after most of the top last-round pairings ended in draws. The six other players who tied with Paravyan – Andrey Esipenko (Russia), Wang Hao (China), Daniil Yuffa (Russia), Maxime Vachier-Lagrave (France), David Navara (Czech Republic) and Mustafa Yilmaz (Turkey) – received cheques for £10,500 each. Winner of the £20,000 prize for the best score by a female player was won by Tan Zhongyi, with Lei Tingjie (China) receiving the second women’s prize of £10,000. The best game prize of £1,000 went to Anna Muzychuk (Ukraine) for her last-round win against Ori Kobo (Israel). 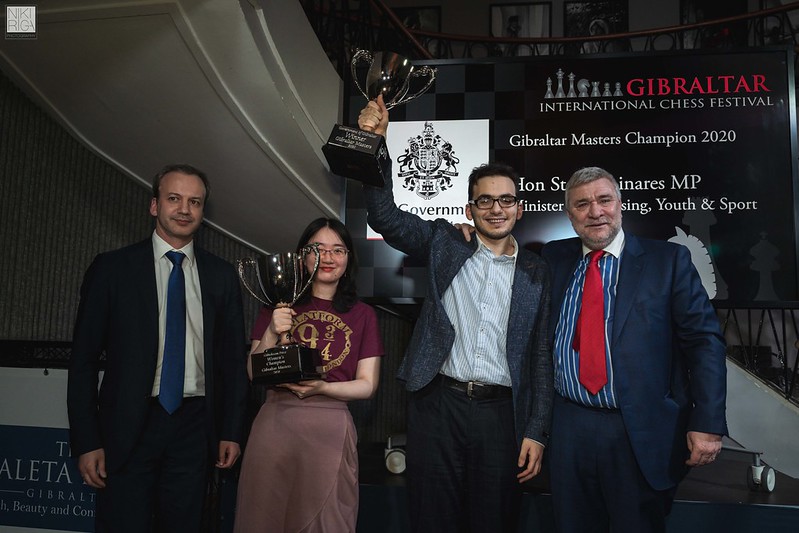 Paravyan’s achievement in securing the much-coveted first prize in this most prestigious of open tournaments was as improbable as it was surprising, but fully deserved. “Very long day, very crazy games and a crazy match against Esipenko. I was very lucky today but very happy to win!” was the winner’s reaction in the interview room. Though nobody could quibble with his solid performance in the tournament, in which he might have scored still better had he taken advantage of winning chances, his very appearance in the tie-breaks owed a lot to the arbitrary nature of the play-off rules which stipulate that only a maximum of four players with the best TPR may take part. He was ranked fourth behind Esipenko, Wang Hao and Yuffa, and only a single TPR point ahead of chess’s perennial Mr Nearly (should that be ‘Monsieur Presque’?), Maxime Vachier-Lagrave, who was fifth in order, having won a very long game against Parham Maghsoodloo to reach the top score group. 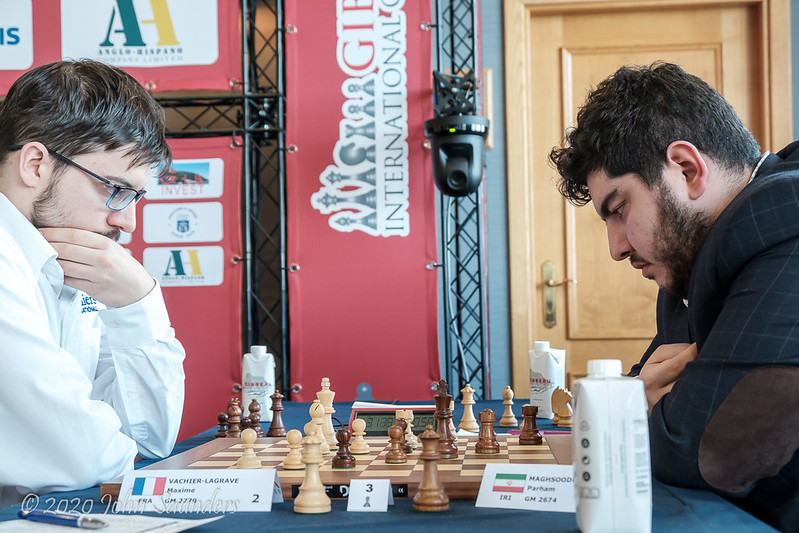 Incidentally, I see there has been discussion online that the tie-break rules in Gib may favour those who have previously taken a bye (as tie-break qualifiers Wang Hao and Andrey Esipenko both did). If this is true (I’ve not had a chance to verify), then the rules need looking at for next year. Personally, I’m in total agreement with what Nigel Short has written about byes in super-opens. I believe they should only be for the convenience of amateurs who pay to play, may wish to take a time-out and are not in the running for big prizes. Players in the running for major prizes should not be allowed to take byes. Or maybe there could be some sort of prize money limit for players who take byes, tailored to the tournament’s budget – maybe a £500 maximum here in Gibraltar?

Then there was Paravyan’s nail-biting semi-final with compatriot Andrey Esipenko. Two games at 10+5 were drawn. The first was fairly even and ended with a threefold repetition, the second was generally better for Paravyan as White but he didn’t push too hard as he decided that discretion was the better part of valour. Two more games followed at 3+2. At this speed there were always going to be more ‘red moves’ (as players sometimes call them, after the red text colour used to highlight bad moves identified by the analysis engines on the Chessbomb site). In game one at 3+2, Esipenko could have had Paravyan on toast had he found 32...f5 rather than pushing the pawn just one square, but the win wasn’t all that obvious, certainly at that time limit. At the second game at this time limit it was Paravyan’s turn to squander a crunching win. 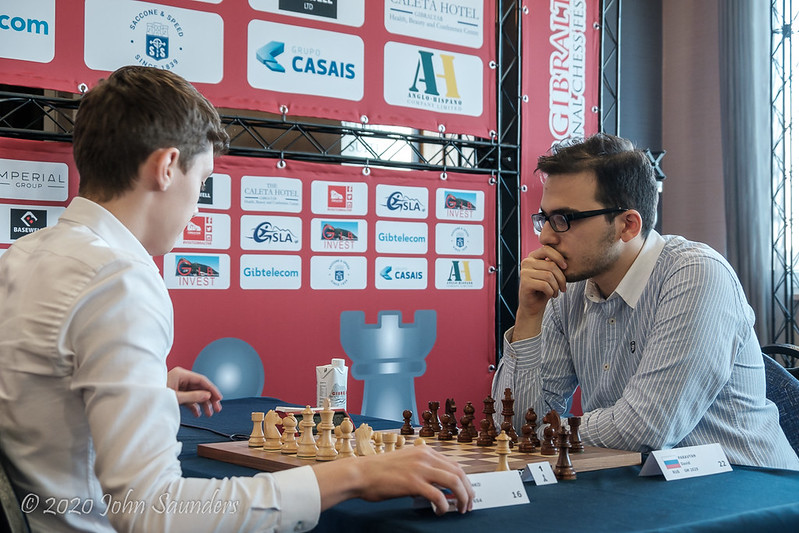 Esipenko vs Paravyan went all the way to Armageddon

This led to the inevitable Armageddon. Paravyan had White, which players usually prefer not to have. Once again the unknown Russian (dubbed ‘the Russian submarine’ by festival director Stuart Conquest) steered through the choppy waters unscathed and unnoticed. If you look at the score on Chessbomb, you can see that it is littered with ‘red moves’ as the two young men’s nerves must have been shattered as they knew that the difference between success and failure was potentially around £20,000. When you look at the actual moves, they don’t look so bad except that Esipenko’s position was becoming critical from around move 15 and he never quite recovered despite some ingenious but increasingly desperate attempts to get back into the game. 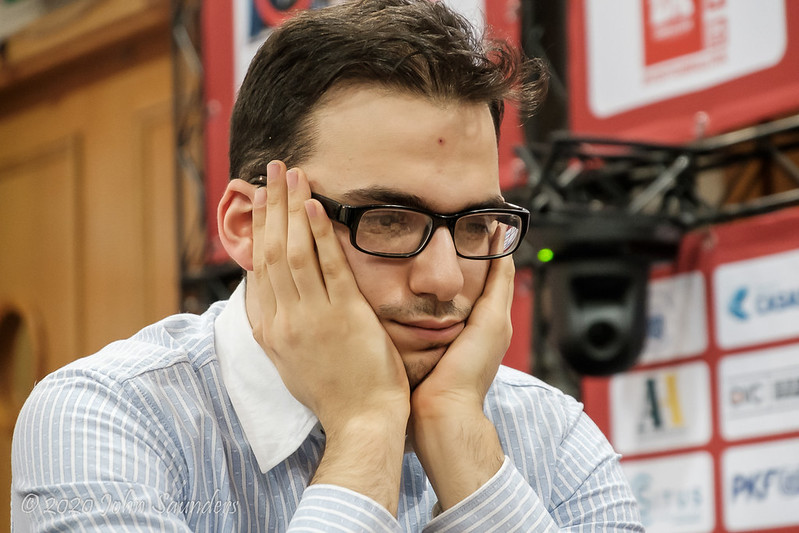 David Paravyan: always the picture of calm concentration at the board

Even having reached the final of the play-offs, Paravyan was still unfancied for the big prize. Surely the winner of the stratospherically strong Grand Swiss tournament last October would be too strong for him, we all thought. Also, the Chinese player had dispatched Yuffa 2-0 in the other semi-final and had been able to rest up while the two other Russians had to play three further games. If I were a betting man, I would have backed the tried and tested Chinese battleship, bristling with the latest opening weaponry, over the newly-launched experimental Russian sub, and I doubt any other pundit would have bet against me. But quick chess is a less predictable form of the game, and often young players can upset their elders and (rating) betters. Wang Hao was the first to make a big play to win in the fateful first game of the 10+5 rapids, but Paravyan matched his aggression and outplayed him to win with Black. 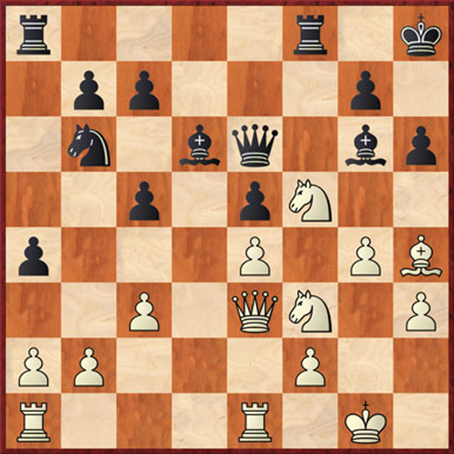 In the second rapid game, Wang Hao was obliged to make a go of it with Black. He gained a slight edge as Paravyan made a couple of inaccurate moves, no doubt due to nerves, but it was nothing serious and the Russian steadily consolidated. Looking down my camera lens at Wang Hao (spectators in the room couldn’t really see the position on the board), I could read slight signs of disappointment on his face, plus a few barely perceptible shakes of the head. But, recalling that I had been the man pointing a camera at him when he won his last-round game at the Grand Swiss tournament last October, he was conforming to the Kipling ideal of treating triumph and disaster the same. Finally, he stopped the clock and offered his opponent a handshake and a smile. A fine sporting gentleman is Wang Hao. 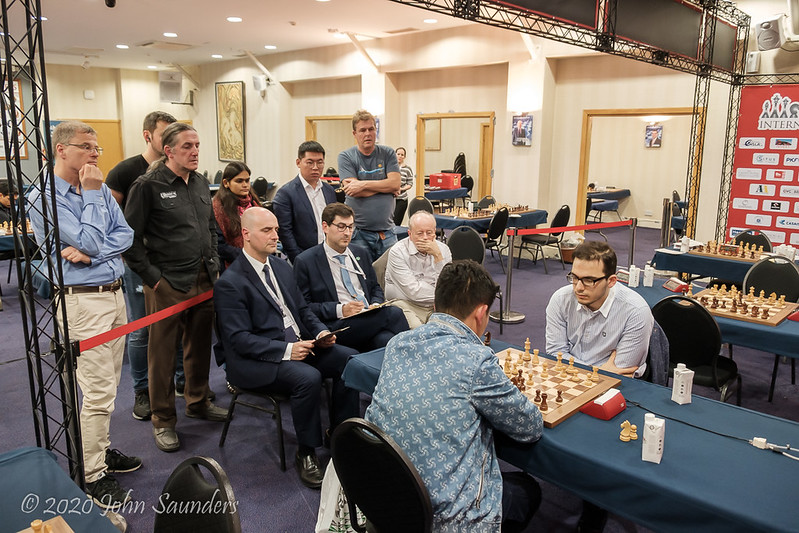 Paravyan and Wang Hao play the final game of the festival

Paravyan stood up looking slightly stunned, much as Wang Hao had in the Isle of Man. There were congratulatory handshakes from arbiters, me and one or two other spectators. He proceeded to the interview room, but was still too zonked to be able to make much sense. I imagine it will be a while before it all sinks in, but winning the Gibraltar super-open is a very big deal for a player, and a springboard to further opportunities, as I mentioned in a previous report. Rated just 2629, he’s perhaps not quite yet the complete package that Vladislav Artemiev was last year when he won the tournament outright in some style and went on to confirm his step-up in level by winning the European Championship, but maybe not too far short. It will at the very least be a huge confidence boost for his chess career and gain him the respect of future opponents. He seems a very pleasant and modest young man, and I’m sure we all wish him well. 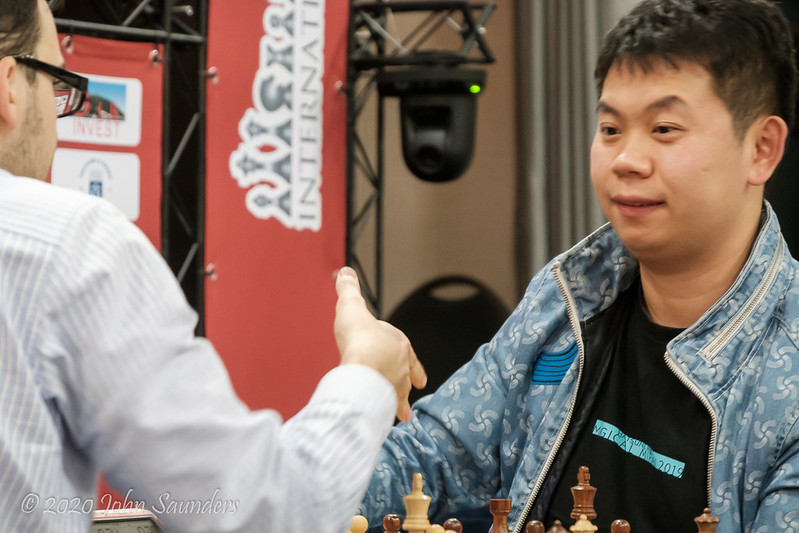 The very last action of the tournament: Wang Hao stops the clock and sportingly smiles at his conqueror

In many ways it was appropriate that a Russian player should have won the tournament as the festival started and ended with visits from major figures in chess from Russia. Legendary former world chess champion Anatoly Karpov opened the tournament by giving a 29-player simul and the festival closed with a visit from the president of FIDE (World Chess Federation) Arkady Dvorkovich who attended the gala dinner and prizegiving.

The president gave a speech in which he recognised Gibraltar as an important centre of world chess and spoke of further cooperation between the international federation and the local chess organisation. Whilst in the press room he took a keen interest in what was happening in the tournament, and was visibly elated to be told that three Russians had qualified for the play-offs. 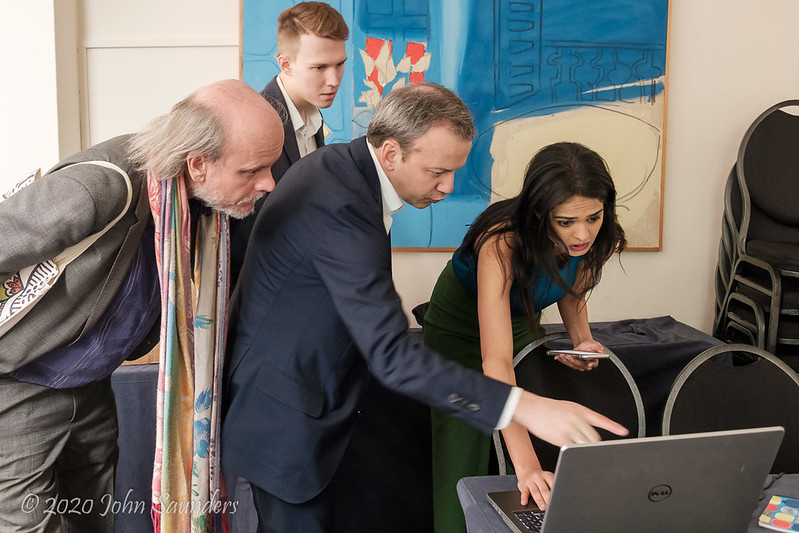 The winner of the other major prize, the £20,000 awarded to the highest placed female competitor (in addition to any other prize she may win) went for the second year in succession to 28-year-old former women’s world champion Tan Zhongyi (China). She secured it with a last-round win against the higher rated Maxime Lagarde (France) to reach a score of 7/10, which put her in joint eighth place in the overall standings and only half a point behind the seven players who tied on the top score. She is the first female competitor in the 18-year history of the Gibraltar Masters to win the prize outright in successive years. In second place in the women’s standings, with 6½ points, was Tan Zhongyi’s compatriot Lei Tingjie, who also defeated higher rated opposition, Azerbaijani GM Vasif Durarbayli. Lei Tingjie received a cheque for £10,000. The two Chinese players came to the interview room, where confident English speaker Tingjie tried her hand at being an interpreter while Tania Sachdev asked questions of the more diffident Zhongyi. It was a privilege for me to watch these three brilliant women players trying to handle an unfamiliar three-way, dual-language conversation, punctuated with laughter as they kept forgetting to pass the microphone to each other and generally getting confused. 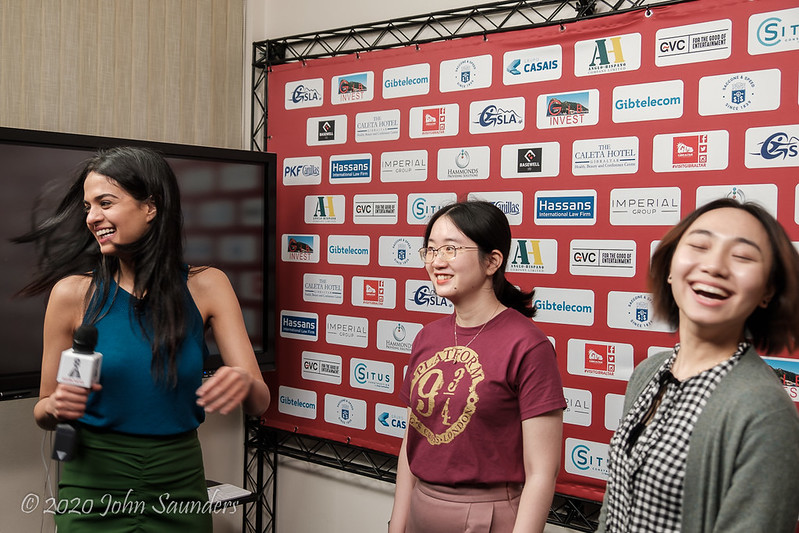 Tania Sachdev, Tan Zhongyi and Lei Tingjie having fun trying to conduct an interview in English and Chinese 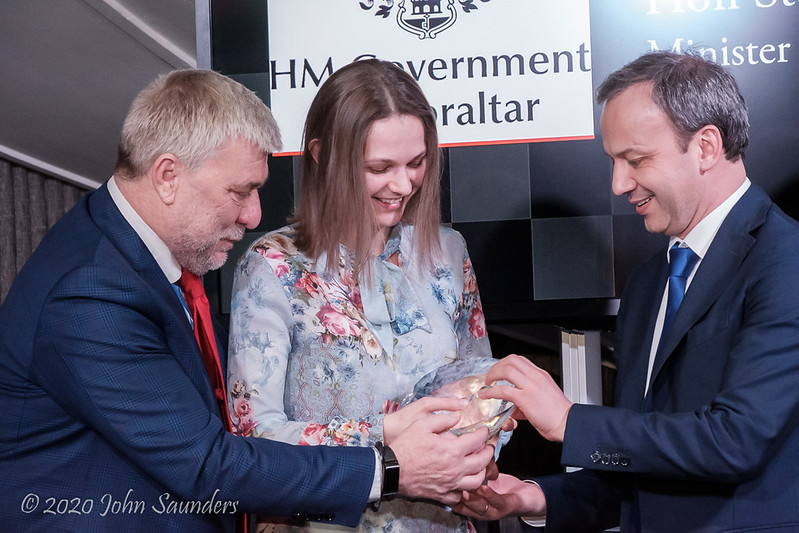 The trophy and £1,000 cheque awarded to the best game played at the tournament went to the top-seeded woman player and former winner of the Gibraltar women’s first prize Anna Muzychuk (Ukraine) for her last-round win against Ori Kobo of Israel, featuring a veritable cascade of brilliant sacrifices. 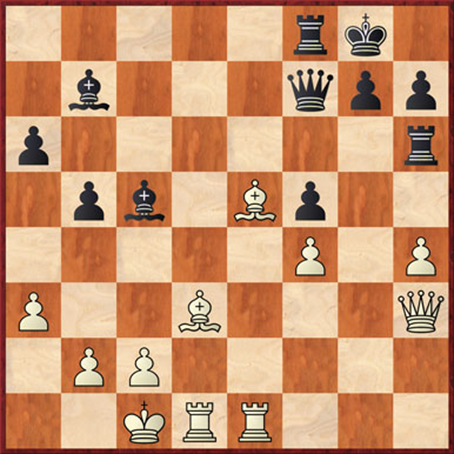 After the chess comes the dinner, the prizegiving and the partying. Rather than me writing about these components of the festival, perhaps the reader would do better to look at all the photos that Niki Riga and I took, and the videos filmed by our film crew, and picture them for yourself. As always at Gibraltar, everything about the festival gives the impression of spontaneous fun, but there is an amazing amount of meticulous planning and preparation from everyone concerned in the hotel and the tournament staff over the course of a year so that all the competitors and guests can enjoy themselves to the maximum for ten or eleven short days. It’s not voted the world’s best open year after year for nothing. You could be part of it. Put next year’s dates in your calendar... 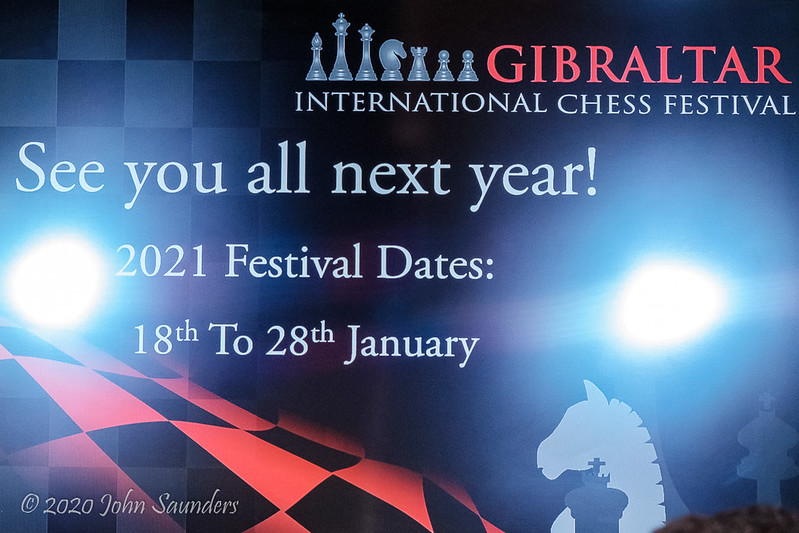 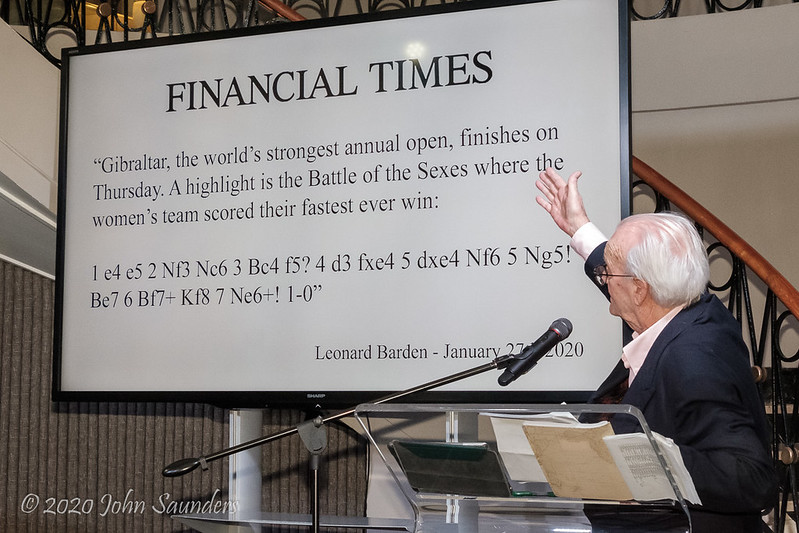 One of the cherishable moments of the tournament – the eight-move thrashing of the men’s team by the women, as recorded by Leonard Barden in the FT 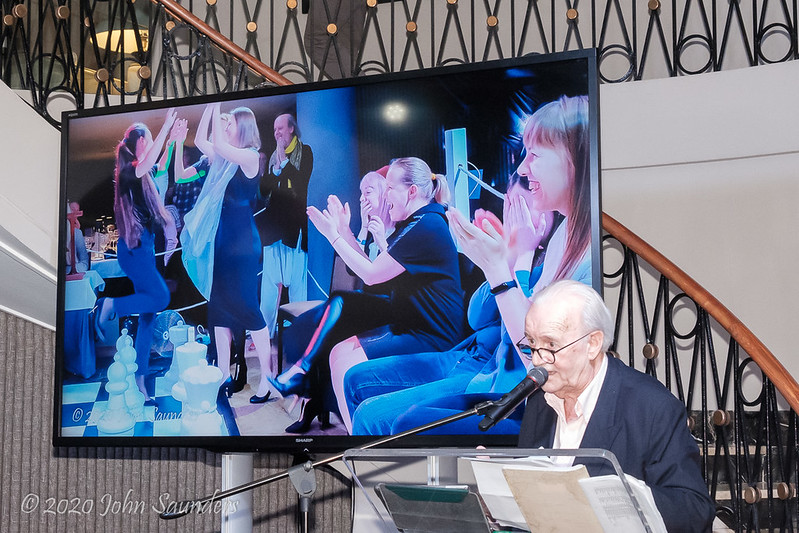 “We gave your boys a helluva beating!” as the Norwegian football commentator once memorably put it 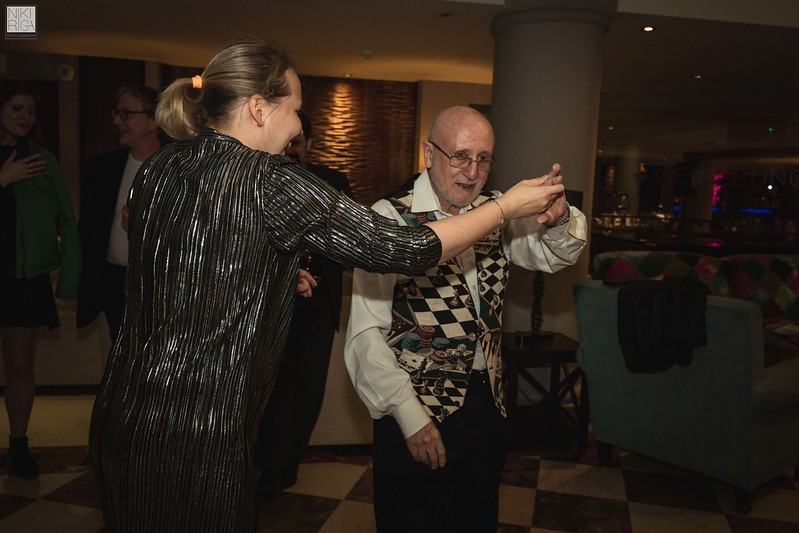 “It takes two to tango”: I’m not sure if Stewart Reuben is teaching Valentina Gunina the steps or the other way around