The 2018 Tradewise Gibraltar Masters, which came to an end on Thursday at the Caleta Hotel, was won by the favourite, Levon Aronian of Armenia, following an exciting play-off after the tournament ended with a seven-way tie for first place on 7½. Aronian received a cheque for £25,000. The top women's prize of £15,000 was won by Pia Cramling of Sweden, who scored 6½, level with Kateryna Lagno, but Cramling had a better performance rating. 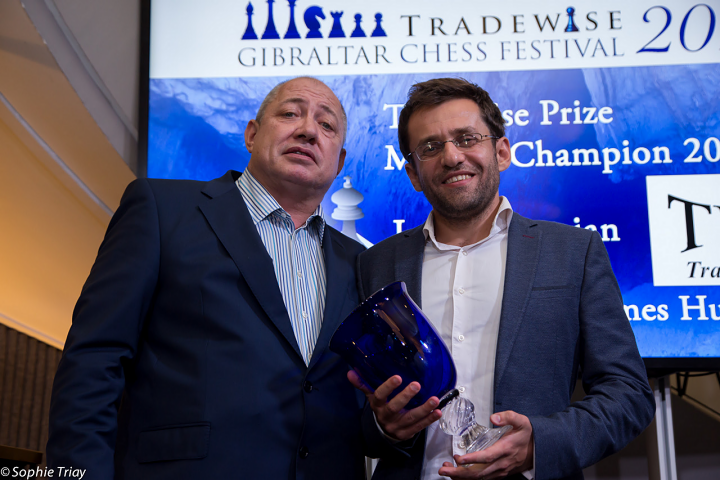 At the start of the day's play five players were on the top score of 7 out of ten and this number swelled to seven after the games between four of the leaders ended in a draw. Top seed Levon Aronian drew with four-times winner Hikaru Nakamura (USA) while second seed Maxime Vachier-Lagrave (France) drew with Richard Rapport (Hungary). The fifth of the overnight leaders, Daniil Dubov (Russia) lost his game to Le Quang Liem (Vietnam) which allowed the latter player to tie with the other four for first place. Two more players, Mickey Adams of England and Nikita Vitiugov of Russia, both former winners of the Masters, also won their final round games to increase the number of players who reached the top score of 7½ out of 10 to seven.

The rules of the competition stipulate a single winner, and only allow the four players with the best tournament rating practice to proceed to the play-off stage, so this meant that Le Quang Liem, Mickey Adams and Nikita Vitiugov, whose performance tie-breaks were inferior to those of the other four were not eligible for the subsequent rapid tie-break phase.

In the play-off, the winners of the semi-finals were Levon Aronian, who beat Richard Rapport, and Maxime Vachier Lagrave, who beat the holder Hikaru Nakamura, thus ending the American's hope of a fourth successive title and a fifth in total. Aronian won both rapid games against Rapport, but Vachier-Lagrave needed a further pair of blitz games to qualify for the tie-break final after the two rapid games against Nakamura ended in a draw.

The final showdown was thus between the tournament's top two seeds, Levon Aronian and Maxime Vachier-Lagrave. They drew the two scheduled rapid games (with 10 minutes each, and an extra 2 seconds added after each move) and then the first blitz game (3 minutes each plus an add-on of 2 seconds). Finally Aronian managed to win the second blitz game to clinch overall victory.

This was Aronian's second visit to the Rock, having finished in a five-way tie for the first prize in 2005, which was the eventuality that determined the organisers to institute a play-off system to resolve ties and produce a single winner. 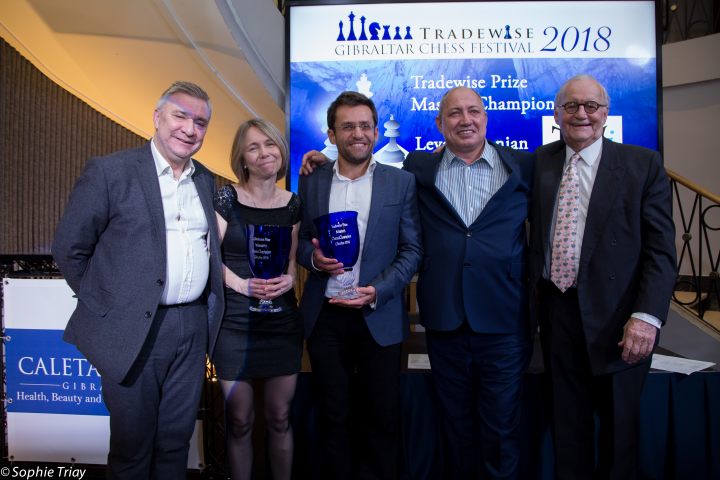 The women's event saw four overnight leaders, Ju Wenjun (China), Pia Cramling (Sweden), Valentina Gunina (Russia) and Nino Batsiashvili (Georgia) whittled down to two after the final round. One was Pia Cramling (Sweden), who drew her last round game, and Kateryna Lagno (Russia) who drew level with Cramling after winning her final game. The other three overnight leaders all lost. The first women's prize was then decided on tournament performance which gave the £15,000 first prize to Pia Cramlingwho met a stronger field than Kateryna Lagno. Cramling is arguably the most loyal of all the Gibraltar competitors having competed at all 16 tournaments with her husband Juan Manuel Bellon, who also holds the grandmaster title, and latterly with their chess-playing daughter Anna, who competes in the tournament. Cramling, aged 54, has now won the top Gibraltar women's prize four times in all.

The outstanding performance amongst the tournament's younger competitors was that of Lance Henderson de la Fuente, the 14-year-old son of an American father and Spanish mother, who lives in Estepona and is registered with Spain. He only recently qualified for the international master title and went one better in Gibraltar, securing his first norm for the higher grandmaster title, scoring a remarkable 7/10, only half a point fewer than the winners, and defeating the 2017 women's first prize winner, grandmaster Ju Wenjun of China, in his final game.

N.b. this is an interim report - a longer version to follow ...

A selection of photos of round ten can be downloaded from the Flickr collections of John Saunders or Sophie Triay.

Video footage and interviews from today's round are available to view and/or embed from the Tradewise Gibraltar YouTube Channel.

Annotated games from this report