The Tradewise Gibraltar Masters tournament got underway with the first of ten rounds being played at the Caleta Hotel on 23 January. Normally the first round consists of the top players cutting a swathe through the lower rated competitors but there were a number of giant-killings as the elite players met fierce resistance from less fancied names. 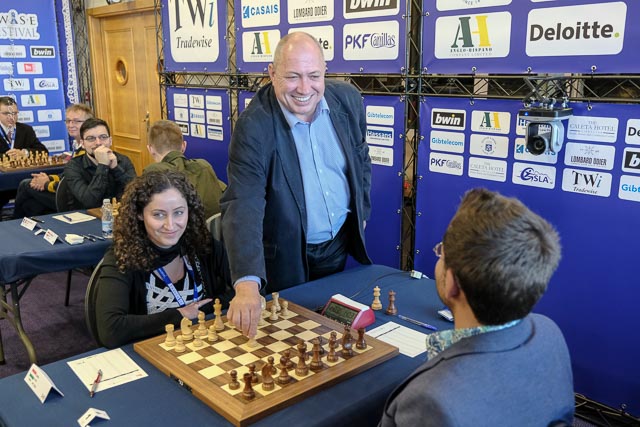 There was a remarkable success for two Hungarian sisters in round one. Not in itself an unprecedented event in top-level chess but what was unusual was that they were not named Polgar. Anita and Ticia Gara faced formidable opposition in the shape of Levon Aronian, top seed and arguably the most in-form chess player of last year, and celebrated super-GM Nigel Short. Levon and Nigel have achieved a lot of successes in the Gibraltar tournament in their time and they haven't got where they are today by conceding draws to players in the mid-2300 rating range but they could make little impression on the Hungarian sisters. Indeed, Levon might have done worse had Anita made more of her chances when we went astray in the middlegame. Nigel had the upper hand against Ticia but it came down to an opposite-coloured bishop endgame and he could make no headway. 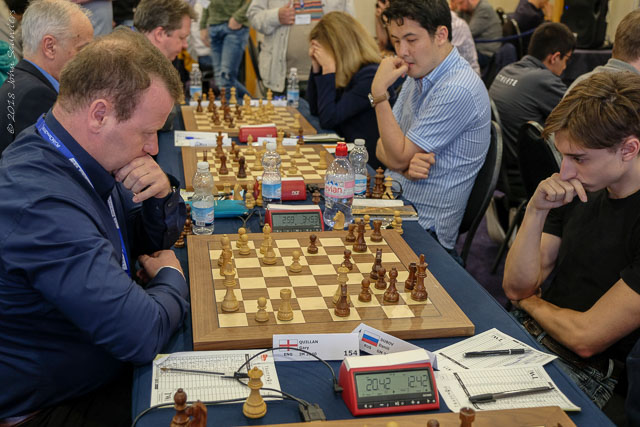 Two English-born amateur players went one further and defeated top professional stars from Russia. Gary Quillan, aged 47, from Liverpool, is an IM but for the past few years he has concentrated on his business career (plus a bit of golf) rather than honing his chess skills. But Gary has always been known as a dangerous attacking player on the British chess scene. Perhaps Daniil Dubov, aged 21, ranked 46th in the world, saw his relatively modest rating of 2340 and underestimated him. 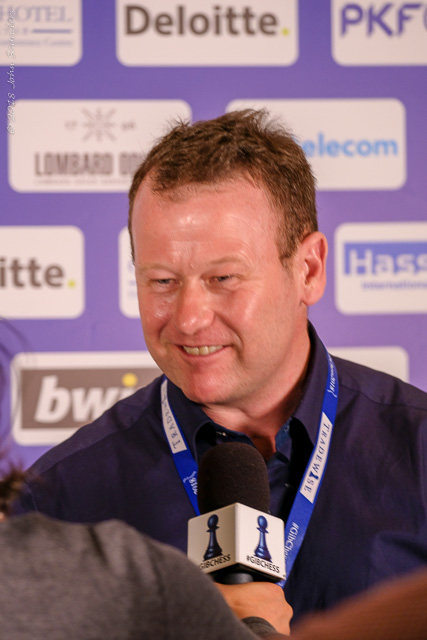 Heather Richards, aged 34, born and brought up in England but now resident in and representing Australia, scored a remarkable win against former women's world champion Alexander Kosteniuk, aged 33, and the fourth highest rated woman player in the world. The Russian player, perhaps trying too hard to win a level position, made an oversight and lost material. Heather Richards won the exchange for a pawn, kept her nerve admirably well and closed out for a stellar win. 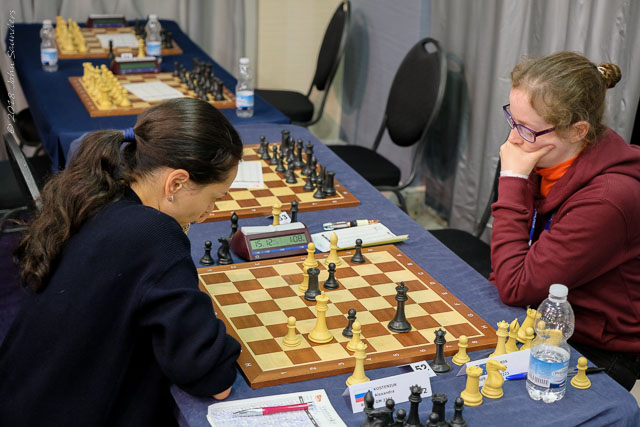 Things proved tough for some of the other contenders for the top women's prize. JuWenjun was in top form last year but she started with a draw against Victor Plotkin of Canada, rated only 2242. Her fellow countrywoman, Lei Tingjie, the current Chinese women's champion, was comprehensively outplayed by a fifty-something FM from Belgium, Andy Baerts, now rated only 2164. I'm not going to annotate this game here but I do recommend readers to play through it to see how the Belgian player created problems for his 2531-rated opponent and engineered a breakthrough. 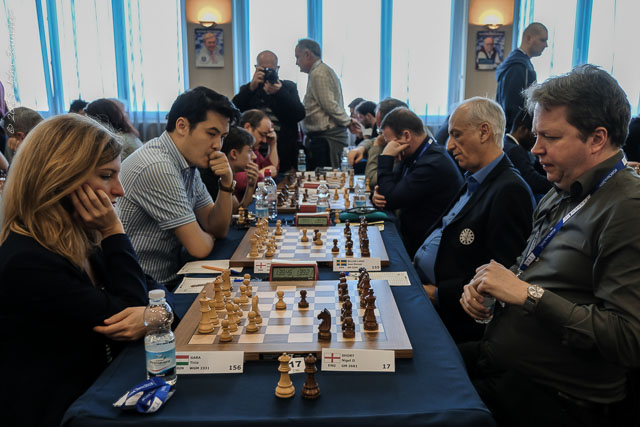 Another player of a similar standard from the low countries, Peter Lombaers of the Netherlands, had a remarkable success against a top player. Ivan Cheparinov of Bulgaria won the 2014 Gibraltar Masters but he was outplayed by the young Dutchman and lost a queen endgame in which his opponent's advanced passed d-pawn proved the decisive factor.

Elsewhere in the field there were some assured wins for other favourites, including four-times Masters winner Hikaru Nakamura, from the USA, and Maxime Vachier-Lagrave, who has come close to winning the Masters on several occasions.

An added dimension to this year's Tradewise Gibraltar Masters is the appearance of two aspirants from India of whom much is expected. Nihal Sarin is aged 13 and on the brink of his GM title – a title which is almost an irrelevance to a player with his stratospheric trajectory, as it is to RameshbabuPraggnanandhaa, aged 12, whose name will test the spelling ability of chess writers for many decades to come, just as his chess abilities will trouble the super-GMs. Both of them have already reached ratings in the 2500s, and both won in round 1, though both were resisted stoutly by players rated in the 2100s.

As well as the formal tournaments, there has already been much to enjoy on the social side here at the Tradewise Gibraltar Chess Festival. On Sunday there was an enjoyable tandem simul given by David Howell and Natalya Zhukova. This reporter couldn't help noticing that Natalya's eyebrows were raised sharply at David's Qc7 in one of the games, which was inimical to the plan which Natalya herself had in mind on the other side of the board. However, I am reliably informed that David's move proved to be more than up to the task of delivering the win. The scores in the simul were +22, =2, -2 in favour of the Anglo-Russian duo. 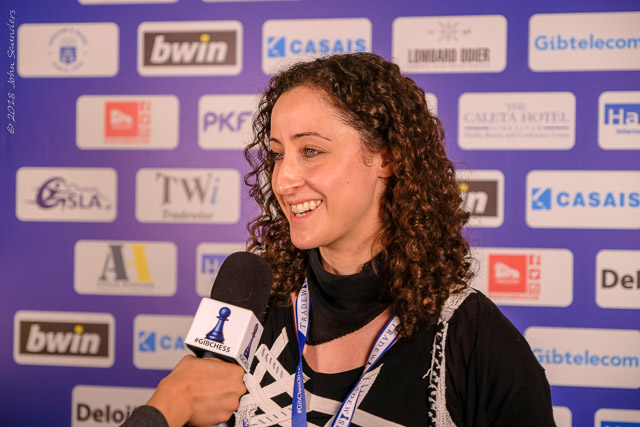 On Monday we were treated to a talk by Nigel Short entitled 'Becoming a Candidate'. The former world championship runner-up took us through some of his ups and downs during the zonal and interzonal tournaments of 1984/85. There is no need for me to describe this in any more detail (other than it was highly enjoyable) since it is available to watch at the reader's leisure on the tournament's YouTube channel.

On Tuesday, after the first round of the Masters, there was a gala dinner at the Caleta Hotel hosted by the Hon. Gilbert Licudi, Gibraltarian Minister for Tourism, Employment, Commercial Aviation and the Port. After the dinner we were treated to a splendid recital given by the Gibraltar Youth Choir. 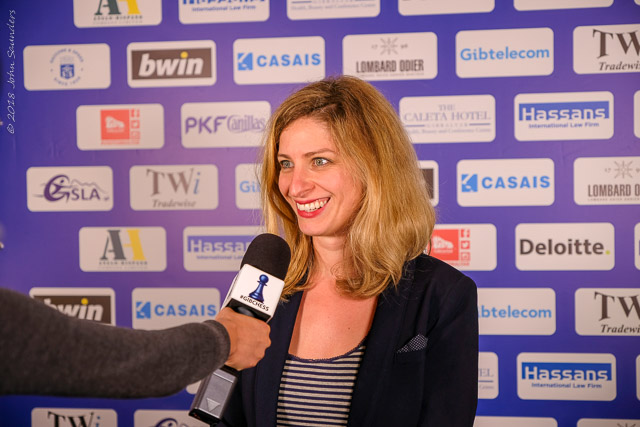 Ticia Gara was delighted with her draw against Nigel Short.

Video footage and interviews from today's round are available to embed from the Tradewise Gibraltar YouTube Channel.

Annotated Game from this report