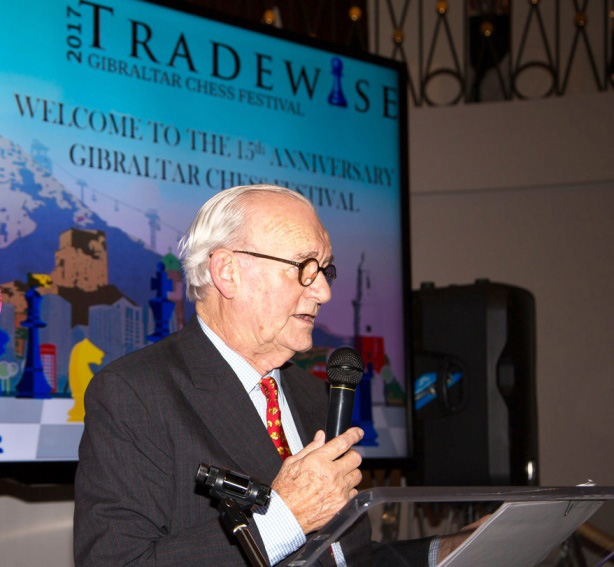 Tradewise, from a small unknown tournament to the best in the world

By bringing the festival to the Rock of Gibraltar he would also lead in the field of events-led tourism when he created this tournament.

At the opening dinner of this year’s festival hosted by the Gibraltar Government he said he was amazed at how it had developed from “a small unknown tournament to what is now described by some as the best event in the world”.

“I have no doubt the best open tournament in the world,” he commented in front of more than 200 chess players, guests and sponsors, and Gibraltar’s Equality and Social Services Minister Samantha Sacramento.

“We have more than 23 players rated 1900 or less in the masters whilst our top ten seeded players on average rate 2758. We feel this is healthy for chess and provides an element of cut and thrust in our open play tournament.”

Confident that no other event today provided an equivalent social platform, he added: “We feel Gibraltar is definitely on a chess player’s bucket list.”

Gibraltarians, he said, could play football for Gibraltar in European and World events as members of Uefa and Fifa but this was not the case for chess.

“I could not play chess for Gibraltar in any team event, for we are not members of Fide,” he stated.

“I say this not for myself, but rather for the ten young players from Gibraltar who are for the first time entering this event. They and others in due course, will want to play for Gibraltar and Gibraltar will want that for them.”

Gibraltar presently comes under the English Chess Federation as it is not part of the Olympic family.

Brian Callaghan took the opportunity to urge Fide to find a way to make this possible.

“We are playing under the umbrella of the English Chess Federation until Fide can find a mechanism to make a genuine and reasonable aspiration a reality, from what I consider is a capital city of chess,” he said.

Mr Callaghan said he found it bizarre that two of the very best chess events in the world, hosted by the Isle of Man and Gibraltar, and neither were Fide members.