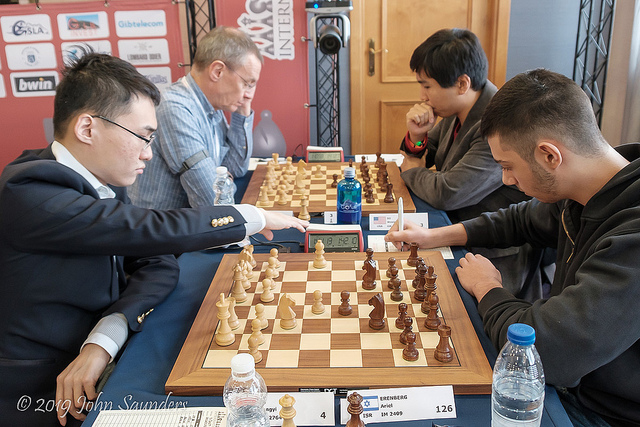 John Saunders reports: The 2019 Gibraltar Masters, the 17th in the series, got underway on Tuesday 22 January 2019 at its usual venue of the Caleta Hotel as another spectacular line-up of chess stars started their quest for the first prize of £25,000. The entrants include no fewer than 14 players rated 2700+, and a further 24 of 2600 or more.

As is now the custom at this tournament, there had been a lottery at the previous evening’s gala opening to decide the opponents of the top seeds and this had turned up some fascinating pairings on the top boards, though the rating differential on each board remained a hefty 300+ on most of the higher boards. As usual in first rounds, something of a slaughter is to be expected, though it is also true that, when outrated opponents are themselves respectably rated in the vicinity of 2400 and holding IM and even GM titles, the defensive wall they are capable of erecting to keep elite opponents at bay is of a strength and resilience of which American presidents can only dream.

This was true to a limited degree of the top board, where top seed Maxime Vachier-Lagrave was kept hard at work way beyond his desired dinner time by Estonian IM Kalle Kiik. To be honest, the Frenchman outplayed his opponent and in cruise control from about move 30 but it took a bit of work and his opponent could legitimately play on to move 60. Levon Aronian breezed through his first game with Indonesian IM Irine Kharisma Sukandar, making him comment later whether it might have been more propitious to have struggled in the first round as he did last year when he drew with Anita Gara but still came out tournament winner.