The 2020 Gibraltar Masters starts on 21 January 2020 with seven players rated 2700 and above topping a stellar field of 248 players vying for the increased first prize of £30,000. The list of competitors also includes many of the world’s leading female players who will be playing for the top women’s prize of £20,000.

Even before the main action starts, there has been a lot to enjoy at the festival. Immediately prior to the tournament there was a three-day chess seminar at the University of Gibraltar, with former world champion Veselin Topalov and IM Elisabeth Pähtz doing the coaching, and chess legend Anatoly Karpov attending the subsequent celebratory dinner. 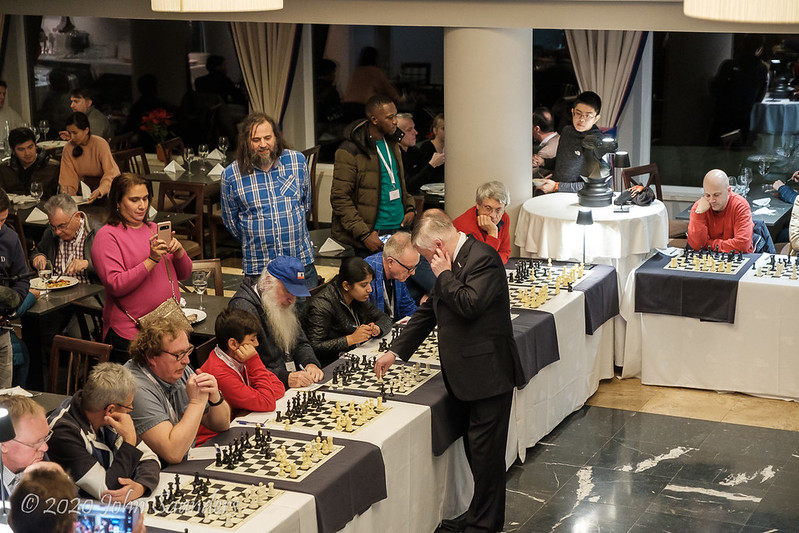 The benefit of this exceptional pre-tournament coaching session bore fruit immediately on Sunday when Karpov gave a 29-board simul at the Caleta Hotel for early arrivals at the festival. One of the seminar attendees, 1923-rated Robert Fischer (a most propitious name), from the USA, capitalised on his coaching investment by achieving a draw with the 12th world chess champion. He was one of only four players who escaped with half a point. If that has whetted anyone’s appetite to attend one of these incredible three-day sessions with chess superstars, just to let you know that the chief coach at the same event in 2021 will be none other than Vladimir Kramnik.

We have joint top seeds in the Masters, with Shakhriyar Mamedyarov (Azerbaijan) and Maxime Vachier-Lagrave (France) both rated 2770. The official FIDE January 2020 list shows the Frenchman as world no.7 and the Azeri as world no.8, though I’m not sure how ranking ties are broken when players have the same rating. The other more significant thing that the two top seeds have in common is that neither will be playing in this year’s FIDE Candidates’ tournament, to be held in Yekaterinburg, Russia, in March/April. MVL was second (behind Anish Giri), and Mamedyarov third in the qualification by rating category, while MVL was third and Mamedyarov fourth behind qualifiers Alexander Grischuk and Ian Nepomniachtchi in the FIDE Grand Prix. Unlucky. Still, I imagine that the prospect of pocketing a cheque for £30,000 and winning what is likely to be the strongest open tournament of the year (there being no Isle of Man Masters in 2020) may be significant consolation for missing out on world championship glory. 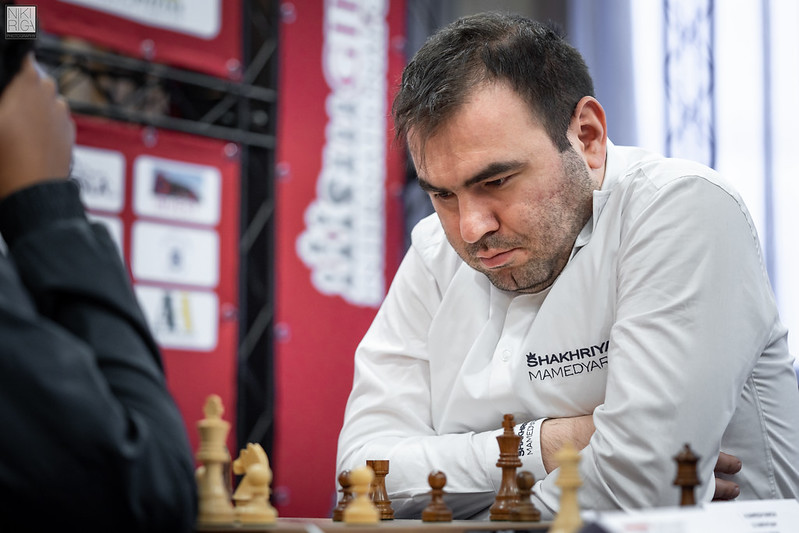 MVL is in danger of becoming known as the ‘nearly man’ of elite chess. As well as failing to qualify for Candidates’ qualification again, he was also edged out in the battle for the Grand Chess Tour title by Ding Liren in London in December despite eliminating world champion Magnus Carlsen in a semi-final play-off – an almost unparalleled achievement given Carlsen’s phenomenal record in tie-breaks. MVL is a regular and popular visitor to the Rock, and he’s missed out on the top prize in three play-offs (2013, 2016 and 2018), so we can only hope that his success in London against Carlsen will inspire him should he face another such denouement here. 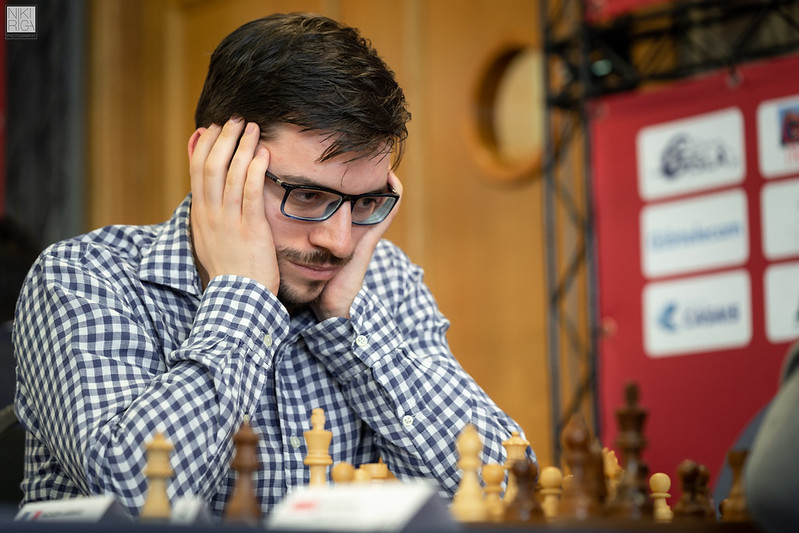 Shakhriyar Mamedyarov has played in Gibraltar once before, in 2012. That year he scored 7½/10, and finished half a point behind Nigel Short and Hou Yifan, having lost to the former in the third round and drawn with the latter in the final round. His peak FIDE rating was 2820 in September 2018 which makes him the sixth highest rated player of all time and he will be looking to regain some of his 2018 form in Gibraltar.

Third in the Gibraltar pecking order this year is Wang Hao of China. His recent fortunes contrast with those of Mamedyarov and MVL as he is one of the two entrants in this year’s Gibraltar Masters who will be playing in the Candidates’ tournament in the spring. Wang Hao’s means of qualification was via the phenomenally strong FIDE Grand Swiss tournament which took place in the Isle of Man last October. There he finished joint first on 8/10 with Fabiano Caruana and took the title on tie-break ahead of perhaps the strongest field in a Swiss-paired individual tournament ever, including such names as Carlsen, Anand, Aronian, Nakamura, Grischuk, Karjakin, So, etc. Were he to win in Gibraltar this year it would make for an unprecedented brace of Swiss tournament successes. He’s been to Gibraltar twice previously: in 2008 he scored a creditable 7½/10 to share third place behind fellow countryman Bu Xiangzhi and Hikaru Nakamura. In 2018 he scored 7/10, which was still the second score group behind the seven players who tied first on 7½. What cost him that year was a second-round loss to the redoubtable Antoaneta Stefanova, who is always a danger to the super-GMs when she plays here. 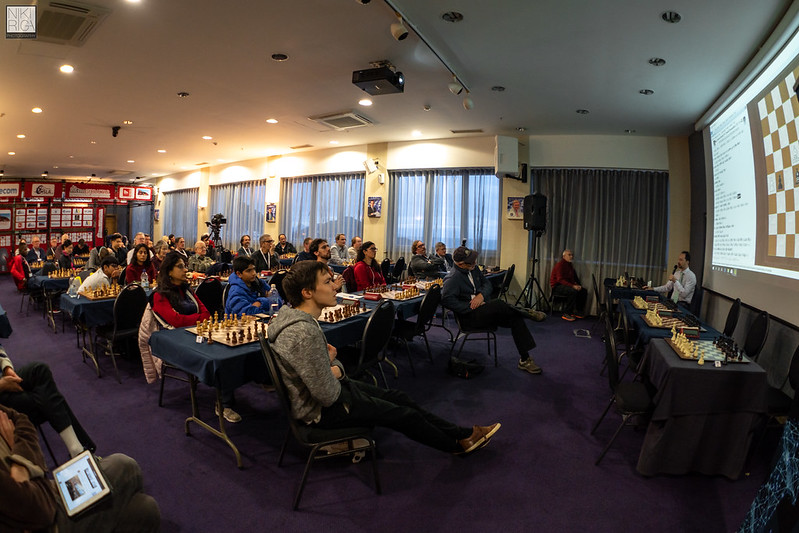 Fourth in rating order here this year is Veselin Topalov of Bulgaria, fresh from his leading role in the three-day seminar (above) which preceded the festival. Veselin has run down his chess activity somewhat in the past few years, no longer considering himself a contender for the world title, but he still participates in the FIDE Grand Prix series and one or two other prestigious events. He’s played in the Masters twice before, scoring 7½/10 in both 2015 and 2017 and being close to the top score group on both occasions. I expect he still has ambitions to emulate his fellow countryman, protégé and long-time second Ivan Cheparinov by winning the Gibraltar title and there is no reason why he shouldn’t do so if things go his way.

Fifth in rating order is David Navara of the Czech Republic. David must be one of the most popular players on the elite tournament circuit with his impeccable manners and old-school charm, but this belies a fierce determination at the board. This is David’s fifth visit to the Rock: his results have been 7½/10 in 2013 (half a point behind the four who tied on 8), 7 in 2014, 6½ in 2018; and 7 in 2019. 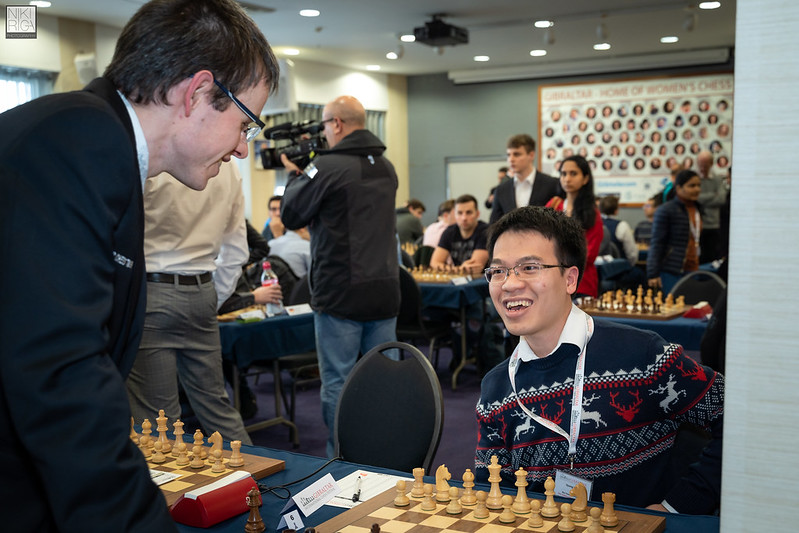 Sixth in rating order is the 28-year-old Vietnamese super-GM Le Quang Liem, also making his fifth appearance in Gibraltar. In 2012 he scored 7/10, in 2013 he made 7 again after a super start of 4/4, in 2018 he finished in the seven-way tie for first place on 7½ but was excluded from the four-player play-off by dint of an inferior tournament performance rating. Last year he was back to scoring 7/10 again. Maybe 2020 could be his year.

Seventh in rating order, and the last of our entrants to sport a 2700+ rating is Kirill Aleksenko of Russia. Kirill is still only 22, and I think it’s fair to say, the least known, at least until the FIDE Grand Swiss tournament in the Isle of Man in the autumn, when he scored an unbeaten 7½/10 to finish third on tie-break behind Caruana and Wang Hao but ahead of a glittering array of players including Carlsen, Grischuk, Vitiugov, Nakamura and David Anton Guijarro. This position in the tournament made him eligible to be a ‘wild card’ player in the FIDE Candidates’ tournament in March/April. This eventuality duly came to pass, the clinching factor being his nationality and the fact that the tournament is due to take place in Yekaterinburg and the wild card decision resting in the hands of the ogranisers. It’s a remarkable achievement, given his recent arrival at the pinnacle of the game and relative inexperience in super-tournaments, but his calm demeanour and coolness under pressure were clearly evident to those of us lucky enough to watch the FIDE Grand Swiss at close quarters. He might have been expected to ‘sit out’ such a strenuous event as the Gibraltar Masters with the Candidates’ tournament being not far ahead on the calendar but he has opted to be bold and give himself a stern challenge in preparation for the world championship eliminator.

Of course, the challengers for the top prize don’t stop at the 2700 barrier. One of the most notable is Vassily Ivanchuk, who holds the record for the highest score by a Gibraltar Masters winner when the Ukrainian legend amassed an eye-watering 9/10 on his debut here in 2011. He is back for his seventh visit in 2019. Now approaching his 51st birthday, he tends not to push himself as hard as in his younger days but he can still frighten anyone, much as he did Garry Kasparov in his heyday. 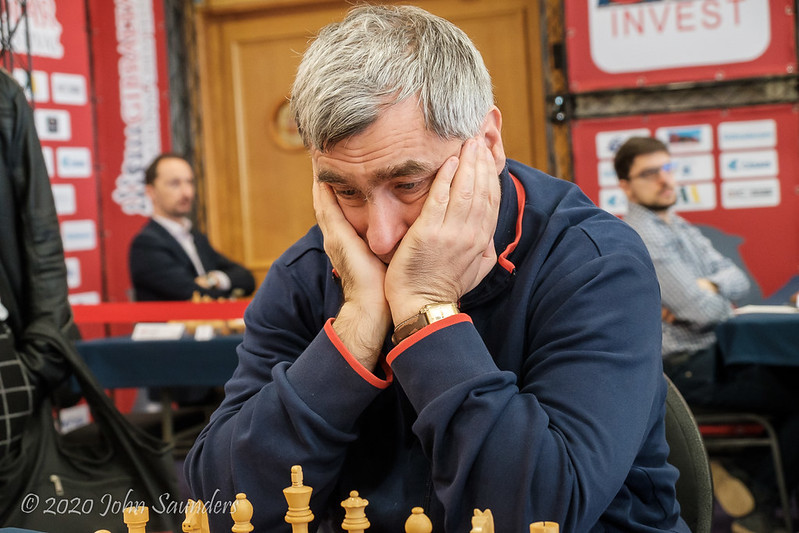 There are three other former Masters winners in the line-up. Mickey Adams is back for his tenth Gibraltar tournament, having won the title in 2010. Mickey is having a bit of a renaissance recently, winning his seventh British Championship title last summer and reclaiming his long-held position as England’s highest rated player after lending it to a couple of his much younger fellow countrymen for a while last year. 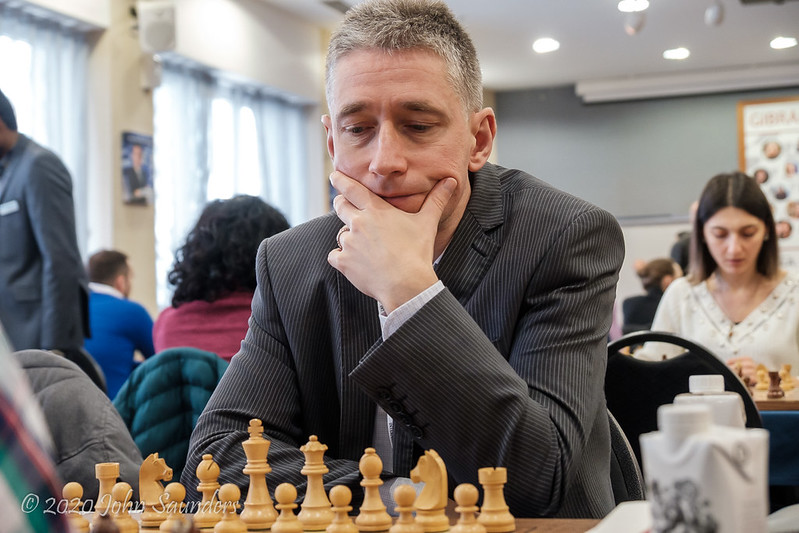 Ivan Cheparinov, we’ve already mentioned, was a Masters winner here in 2014, and he’s accompanied by his wife, former women’s world champion Antoaneta Stefanova, who has won the top women’s prize here on two occasions. The third former winner playing this year is Greek GM Vasilios Kotronias, who shared first place here with Nigel Short at the very first Gibraltar Masters in 2003. Welcome back, Vasilios, it’s good to have you here again.

The top women’s prize of £20,000 has attracted a very strong field of female players. Leading the challenge in terms of rating will be Ukrainian GM Anna Muzychuk, who has been a regular contender in Gibraltar and who took home the top women’s prize in 2016. At the time she was on record as saying of her success, “it’s been my dream,” demonstrating the significance and prestige of the top Gibraltar prize in women’s chess worldwide. 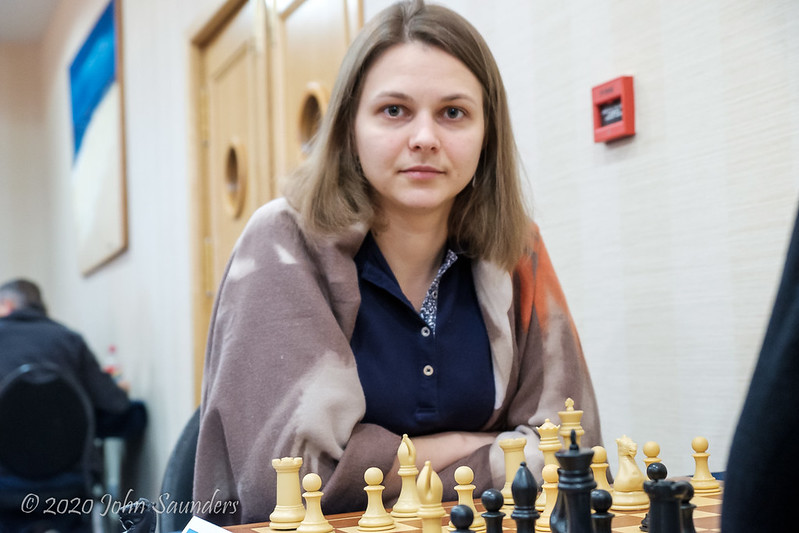 Second in order is the 2008-2010 women’s world champion Alexandra Kosteniuk of Russia, making her fourth appearance in Gibraltar. One of Alexandra’s recent successes was to complete the double of the 2019 European Rapid and Blitz Championships. Third most likely contender for the top prize is China’s Tan Zhongyi, who won the 2017 Women’s World Championship when she defeated Anna Muzychuk in the final. Tan Zhongyi took the top women’s prize in Gibraltar last year with an excellent score of 7/10, winning her final three games in succession, including two against strong GMs. 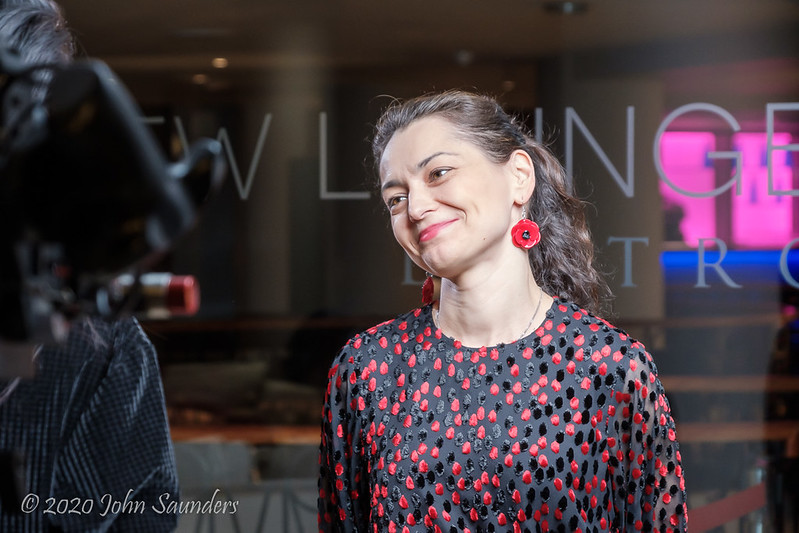 Following these three is a formidable array of strong female players rated in the 2400s, including Natalija Pogonina, Olga Girya, Zhansaya Abdumalik (who played here aged only 14 in 2014 and made a big impression – she’s now the top-rated female player under 20 in the world), the evergreen Pia Cramling, Antoaneta Stefanova, Elisabeth Pähtz, Lela Javakhishvili, Valentina Gunina, Nino Batsiashvili, Gunay Mammadzada (a new name, aged only 19, from Azerbaijan),  Ekaterina Atalik, Bela Khotenashvili, Irina Bulmaga... and on and on. All the top women players want to play in Gibraltar and I expect that, but for an unfortunate clash of dates, we would have had the two players currently battling it out for the world title – Ju Wenjun and Aleksandra Goryachkina – who have both played here before.

Another interesting facet of open tournaments is the influx of ambitious young juniors, keen to do battle with established stars of the game. We have a triumvirate of brilliant young Indian prodigies taking part this year: Rameshbabu Praggnanandhaa, Raunak Sadhwani (both aged 14) and Dommaraju Gukesh, aged 13. Their current rating and titles are GM 2602, IM 2522 and GM 2542 respectively. All three have played here before and, despite their ages, could be considered battle-hardened pros already. It will be fascinating what progress these young stars will have made since their last appearances here.