John Saunders reports: Round nine of the Gibraltar leg of the FIDE Women’s Grand Prix at the Caleta Hotel on 31 May came to a heart-stopping conclusion after six hours and ten minutes as Zhansaya Abdumalik of Kazakhstan won her game against Valentina Gunina of Russia in 133 moves despite never having the remotest chance of winning the game for the first 100 moves. Zhansaya thus completes her rating requirement for the grandmaster title as well as moving into an imposing two-point lead over the rest of the field with two rounds remaining. Zhansaya has 7½/9 while three players are on 5½. Gunay Mammadzada of Azerbaijan is one of them: she nearly achieved a GM norm but missed some drawing chances towards the end of her game with Kateryna Lagno, who also moved to 5½ and remains the front runner for a place in the Candidates’ tournament. Mariya Muzychuk remains on 5½ after losing to Alina Kashlinskaya. 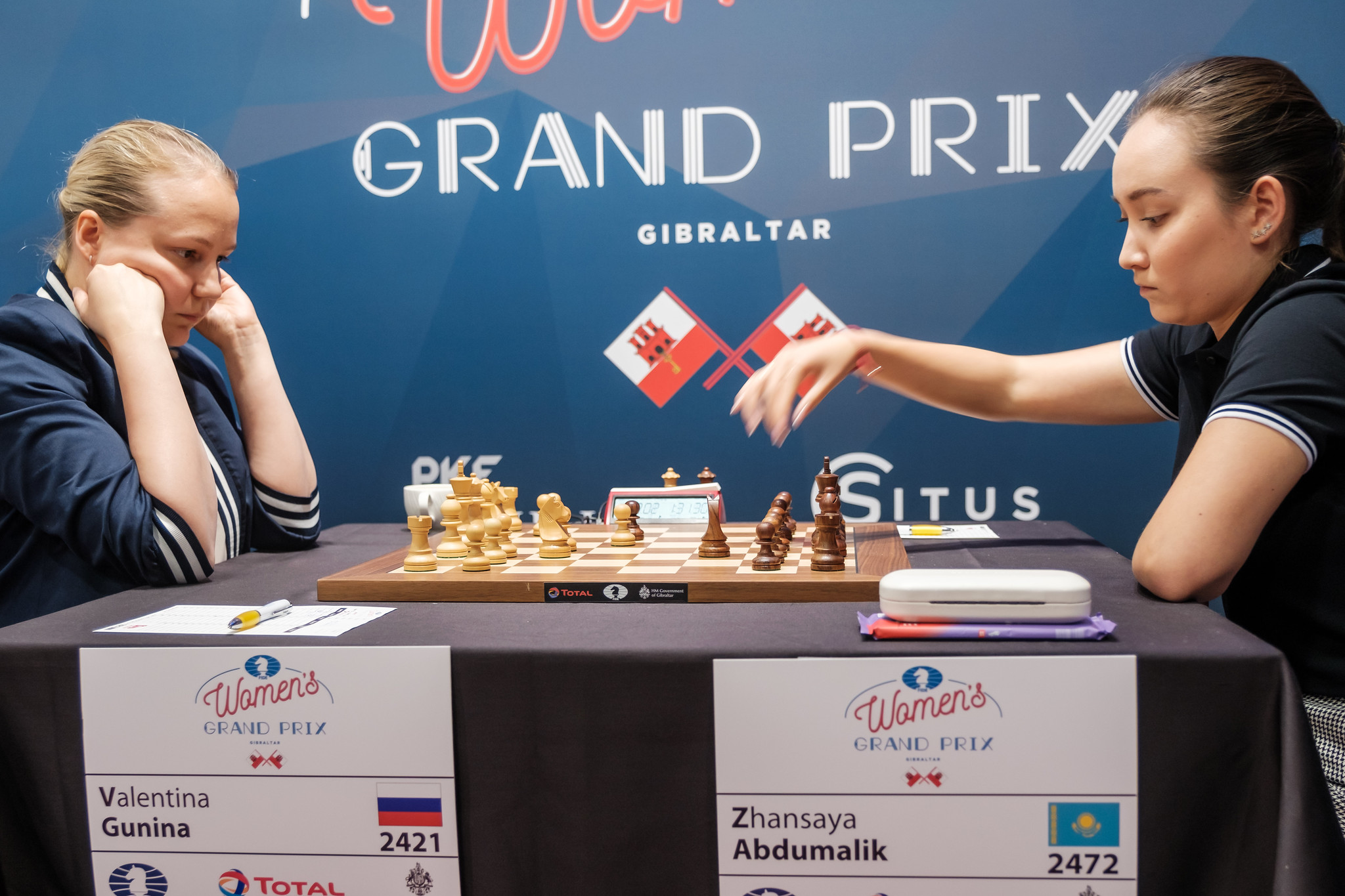 Zhansaya Abdumalik played the black side of a Queen’s Gambit Accepted against Valentina Gunina, who has yet to draw a game in the tournament. Valentina advanced in the centre while Zhansaya countered on the queenside. Suddenly things became sharp as Zhansaya played the risky looking 17...h6, which Valentina replied to with a sneaky temporary sacrifice 19 Nxc4. Zhansaya further stirred the pot with 20...Bxa3, allowing a possible incursion into her territory with 21 Qh7+, but Valentina found a more pragmatic way of handling the position, emerging with an extra pawn. For most of the rest of the game, Valentina held an advantage but, typically, Zhansaya fought tenaciously. There was even a brief moment when a win was possible, but very much of the computer variety - 46...f4!! Instead Zhansaya played a move that might have lost, but once again she clawed her way back to equality. On and on they played, with Zhansaya eventually securing a dead drawn position. Her hopes of completing her GM requirement had evaporated hours before and she would have had to accept a draw had Valentina repeated moves or offered a draw. 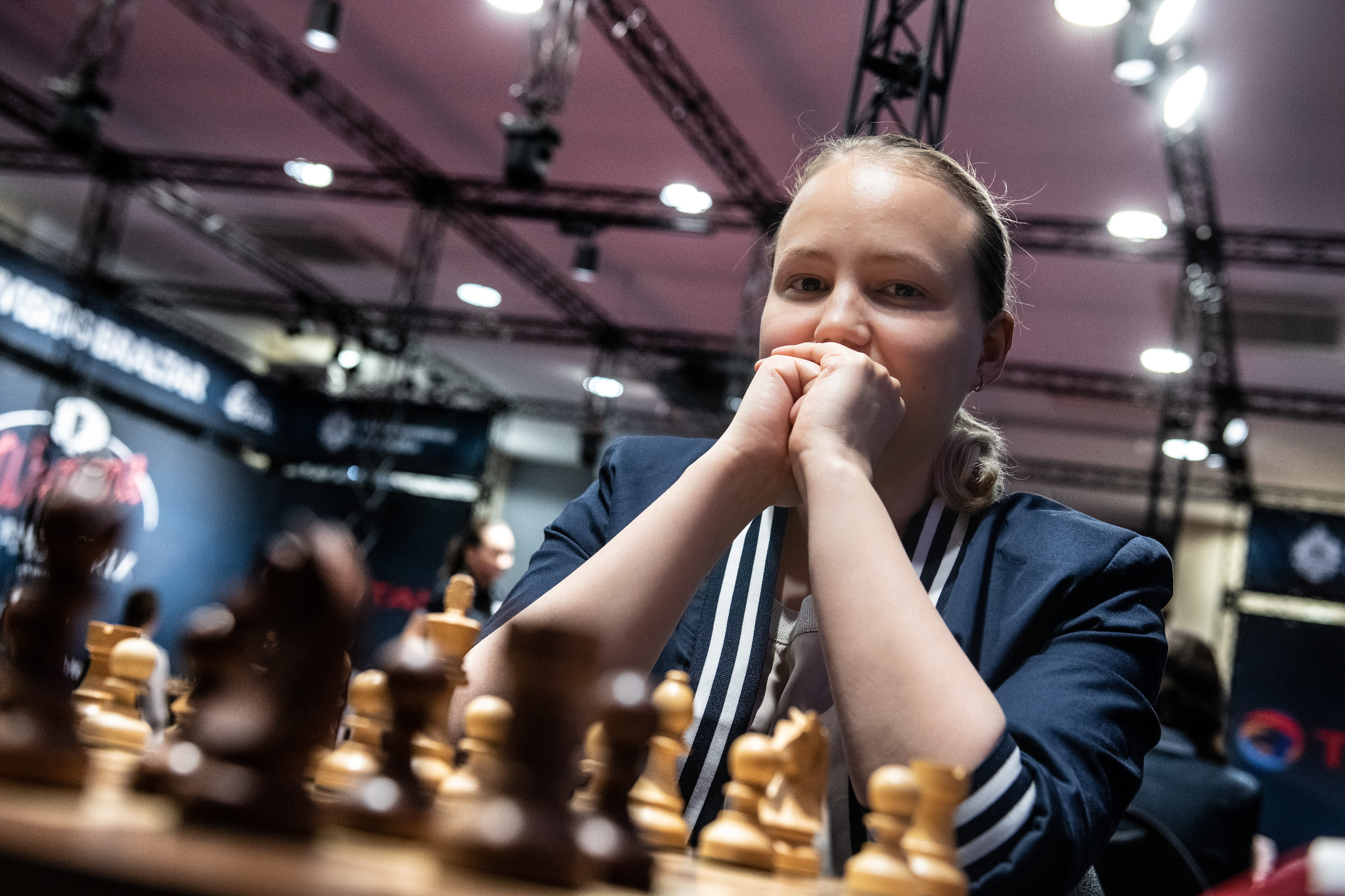 But we all reckoned without Valentina’s gung-ho spirit. She hasn’t drawn a game yet in the tournament and plays every game to the death. She tried too hard to win a won position and, as so often happens, found a way to lose. Suddenly Zhansaya was presented with a won position, though it was still problematic. Valentina fought tenaciously again, now in a lost cause. After six hours and ten minutes, with both players utterly exhausted, Zhansaya finally secured the most improbable of victories, and it was my privilege to be the first person to address her as ‘Grandmaster Zhansaya Abdumalik’ when she came into the interview room. An utterly unforgettable game for everyone who witnessed it, and one reflecting great credit on both players for their never-say-die attitude.

Gunay Mammadzada, needing a draw with Black against Anna Muzychuk to clinch a nine-round GM norm, defended with a Scheveningen Sicilian where White fianchettoes kingside. Gunay’s 12...Bb7 led to a passive position in which White was able to take control of the dark squares in return for a temporary pawn sacrifice. Prospects looked blear for Gunay, but Anna failed to find the most way to clinch the game. When the game transformed into an endgame, there was a fleeting moment when Gunay might have held the draw, but it was hard to work out over the board and Anna won the resultant king and pawn endgame.

Kateryna Lagno, after suffering her first loss in round eight, opened 1 e4, and Irina Bulmaga, after a run of four straight losses, countered with a Rauzer Sicilian. Around move 20, Kateryna had established an edge and soon secured the two bishops. Irina ceded a pawn for which she had insufficient compensation, and things started to look bleak for her. Irina wasn’t able to create counterplay and Kateryna soon managed to engineer a kingside assault which was conclusive. Kateryna thus retains her edge in the race to qualify for the Candidates’ tournament.

Nana Dzagnidze and Antoaneta Stefanova, both on 4/8 at start of play, started with a Semi-Slav. As they emerged from the opening, Antoaneta had slightly the better of things as she advanced pawns towards Nana’s queenside castling set-up. Nana thought that Antoaneta’s plan of 17...Ba6, exchanging light-squared bishops, might have been a mistake, and it became increasingly clear that White was dominating the position. Nana worked her knight into play and then mounted a kingside attack. Antoaneta’s time trouble contributed to her problems and very soon Nana found a powerful breakthrough to clinch the point and preserve her chances of a Candidates’ place. 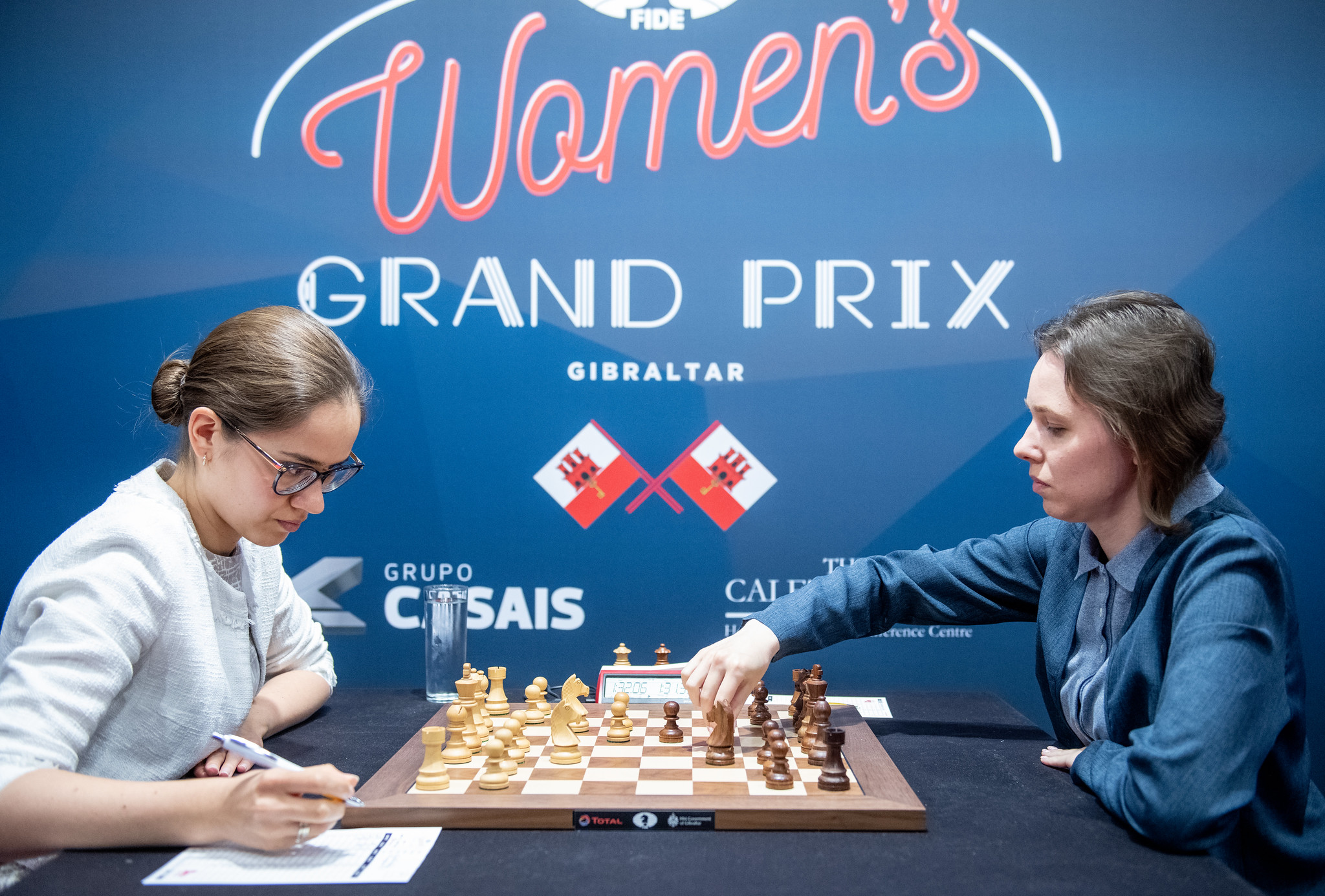 Alina Kashlinskaya and Mariya Muzychuk started with the Botvinnik (Anti-Moscow) variation of the Slav Defence, where both players have to walk a tightrope of complexity on which the tiniest slip can send you tumbling into the abyss. Before long, Mariya, playing Black, had gained a couple of pawns but Alina was occupying a lot of dark squares and pressing against Black’s weak e6-pawn, constituting solid compensation. The position became very complicated and eventually Mariya blundered, losing immediately. Her chances of qualifying for the Candidates’ tournament must be all but finished.

Elisabeth Paehtz was still in the running for her final GM norm. She had to win in round nine and round ten to make a ten-round norm, and could then convert it to an 11-round norm by winning again in the final round. Today, playing the black side of a Catalan, Lizzie started at a rate of knots against Dinara Saduakassova. “She’s going to break some sort of record,” said commentator Veselin Topalov. However, the game proceeded evenly and Dinara never gave Lizzie a chance of scoring a win. Eventually a threefold repetition presented itself: in her post-game interview, Dinara said, “yesterday I could have repeated, so today...” - I finished the sentence for her, “discretion was the better part of valour!”

Round 10 is on Tuesday 1 June at 15.00 CET. Live transmission, with Veselin Topalov and Fiona Steil-Antoni, may be found at https://www.gibchess.com/wgp2021-live-commentary