John Saunders reports: IM Zhansaya Abdumalik, of Kazakhstan, increased her lead to a full point over the field in round eight of the Gibraltar leg of the FIDE Women’s Grand Prix by defeating Alina Kashlinskaya of Russia. Zhansaya also took a big step towards achieving the rating she needs for her GM title. Kateryna Lagno, of Russia, front runner for the Candidates’ place which will go to the highest placed eligible player, lost her game to Gunay Mammadzada of Azerbaijan, but despite that reverse remains the best placed contender to go through to the Candidates. By scoring her third successive win Gunay has taken herself to the brink of a nine-round GM norm for which she a draw against Anna Muzychuk in round nine.

The star game of the day was the one between two players on 4½ points, Gunay Mammadzada and Kateryna Lagno. Kateryna started the round as one of three undefeated players in the field. The opening was a Ruy Lopez/Spanish, with Gunay playing her opening moves significantly quicker than Kateryna, indicating better preparation by the Azerbaijani player. Before long, Kateryna offered a queen exchange with 20...Qd3 but this allowed a minor piece exchange on f6 and then a piece sacrifice with 22 Qxf6. Gunay had a long think and then decided to go for this sacrifice, which could be followed by a further piece sacrifice to launch a big attack on the black king. There followed a double oversight shortly afterwards (24 Rfe1 could have been answered by 24...Nd5! - instead 24 Rae1! was winning), but Gunay then reasserted her advantage with some powerful play, reaching a position with an extra pawn and a strong positional grip on the game. Kateryna could not find any way to get back into the game and Gunay went on to score another remarkable win. We now think she needs half a point in round nine for a nine-round GM norm. Though this was not a great result for her, Kateryna still has the best chance of the small group players in Gibraltar who are eligible, to annex a place in the Candidates. 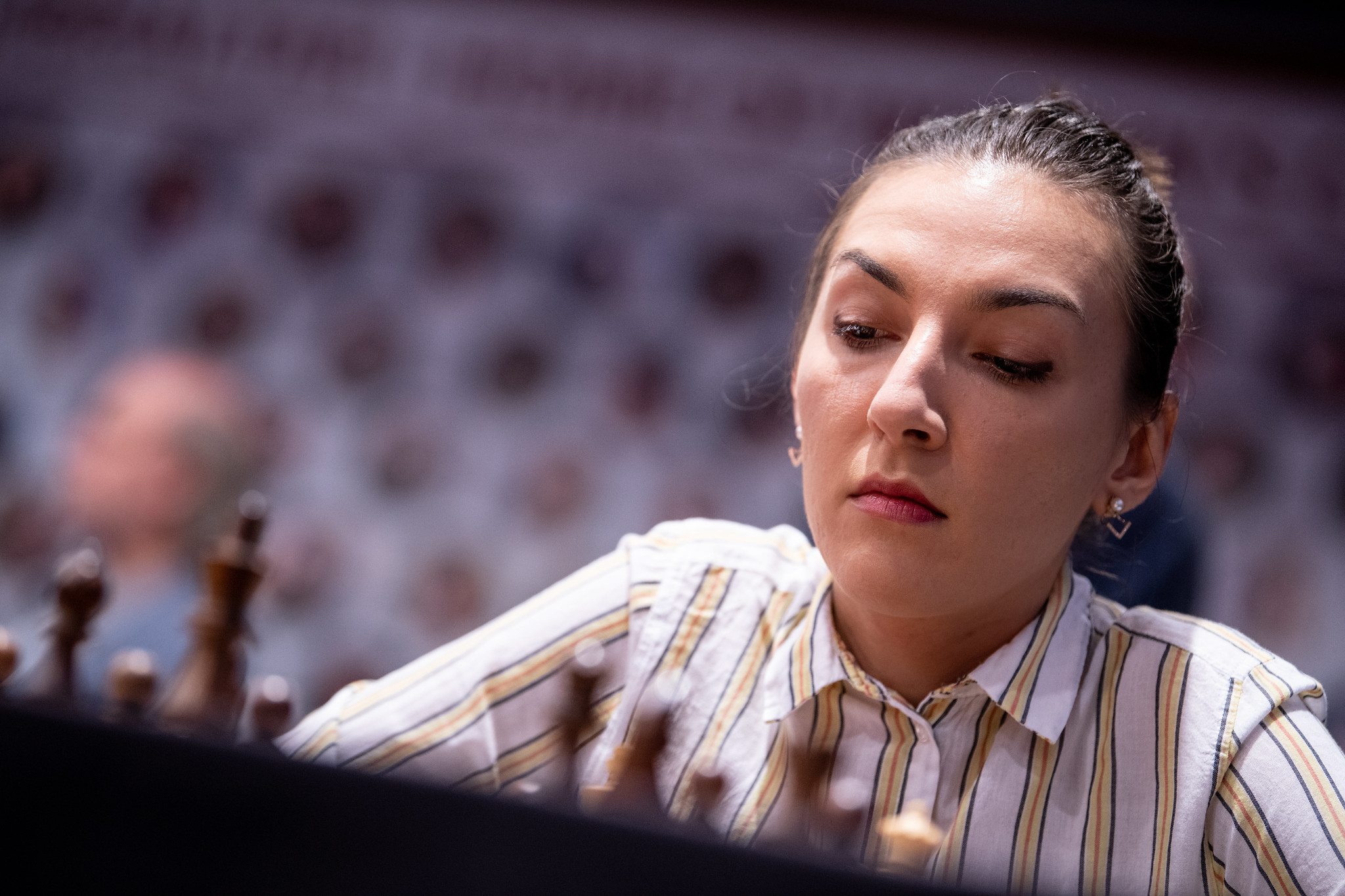 The game between the leader, Zhansaya Abdumalik and Alina Kashlinskaya started with a solid line of the Two Knights’ Defence. Zhansaya occupied the centre with pawns, but Alina developed comfortably and was soon able to exchange heavy pieces and reach an equal position in the late middlegame. However, Zhansaya kept pressing and she eventually emerged with an extra pawn. A queen endgame was ominous for those of us who were looking forward to our dinner but, unfortunately for Alina, she misplayed the endgame and allowed Zhansaya a decisive f5 push after which the game ended with surprising speed. Another determined performance by Zhansaya, who seems to have made a quantum leap in strength recently. 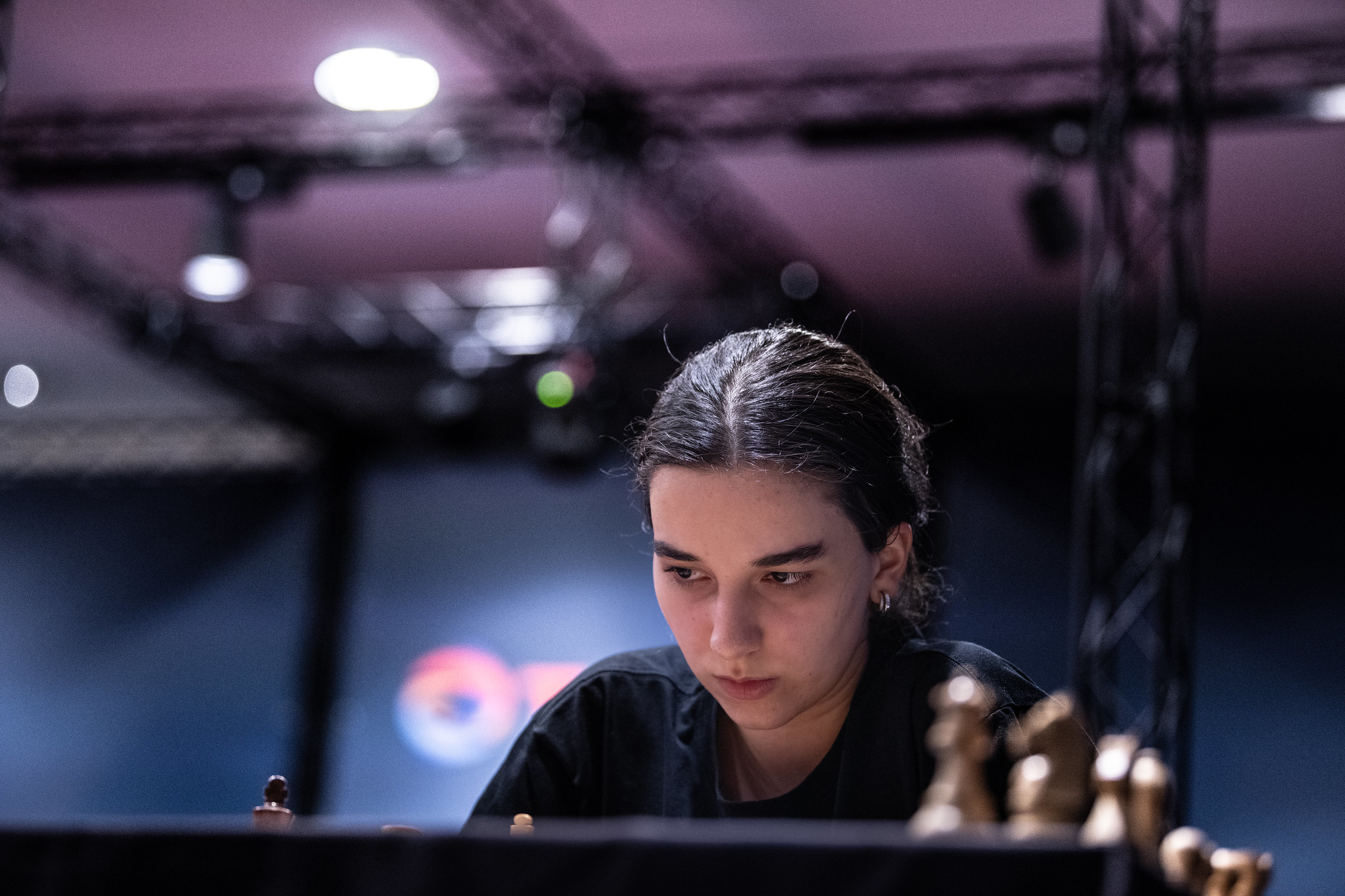 Mariya Muzychuk opened 1 e4 against Nana Dzagnidze, who defended with the Najdorf Sicilian. Mariya chose a line with h3 and g4, which Nana countered with a typical Sicilian exchange sacrifice (RxNc3), opening lines for her minor pieces. Veselin Topalov, on commentary, preferred Black “because I like exchange sacrifices.” However, he later criticised 22...f4 after which White’s king became safer. Also, White’s rooks started to have open files on which to operate. “I think Dzagnidze seriously misplayed,” said the former world champion. However, that wasn’t the end of the story as Nana’s position held together well and eventually Mariya offered a draw.

Antoaneta Stefanova versus Dinara Saduakassova started with a Queen’s Indian, developing into a small but stable edge for White. Then the game followed a game which Dinara had played earlier in the tournament against Valentina Gunina but came very imbalanced after a tricky phase of play in the late middlegame. Antoaneta gained two connected passed pawns for a minor piece. Dinara had earlier spurned a chance to draw by perpetual check and must have regretted not taking it as Antoaneta’s pawns steadily advanced up the board, ably supported by the king. Eventually Antoaneta was able to sacrifice an exchange and force a promotion to clinch the point. 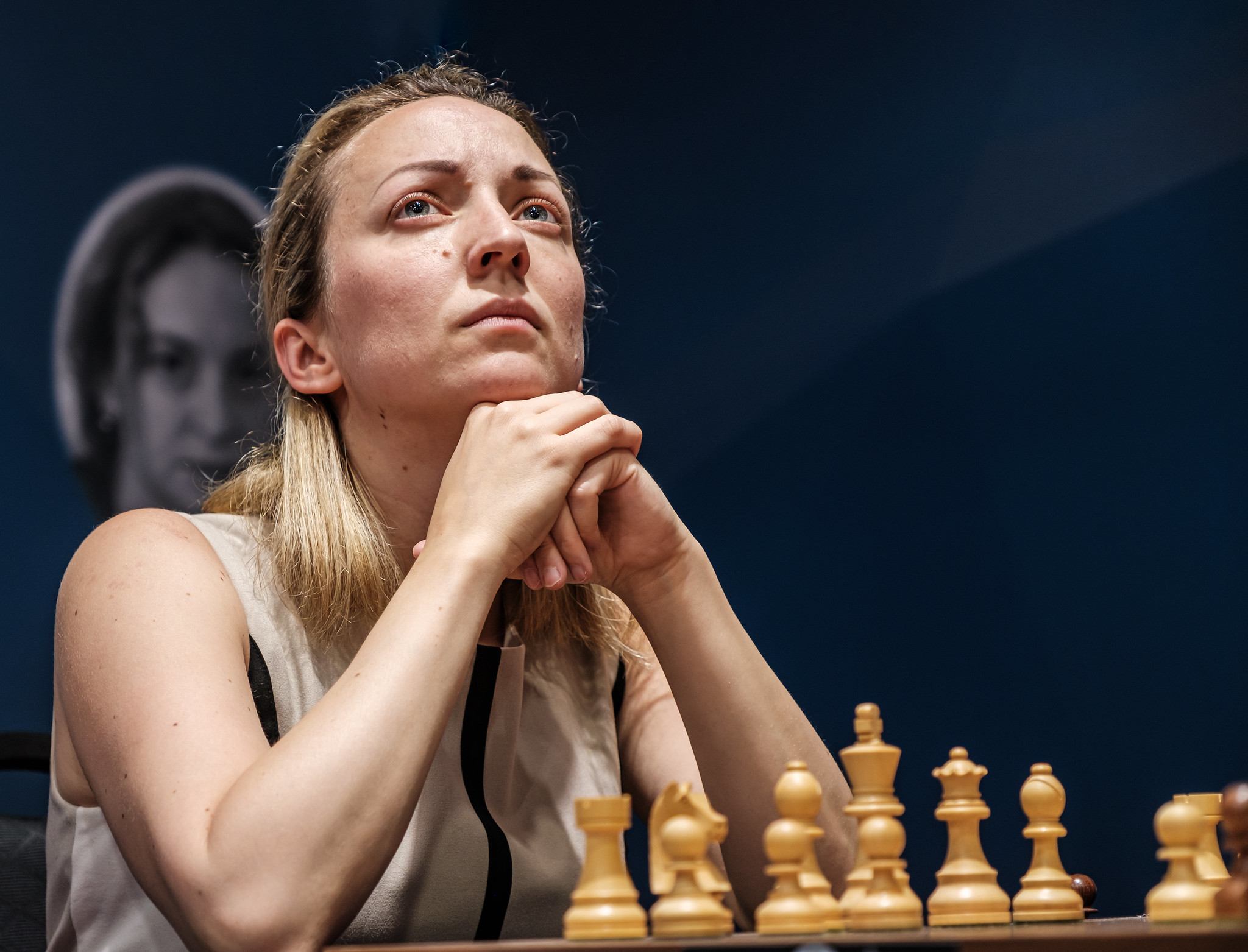 Irina Bulmaga, playing against Valentina Gunina’s Caro-Kann Defence, opted for a quiet line (3 exd5 and 4 Bd3) which we old-timers recall Bobby Fischer using against Tigran Petrosian with some success. Irina’s 13 c4 looked suspicious, allowing Black easy equality and perhaps a little bit more. Valentina played quickly and confidently in response but faltered with 23...Bc7 when 23...b5 looked strong and natural. Perhaps encouraged by Valya’s slip, Irina gradually wrested the advantage back for White. However, Irina didn’t play the strong positional advance 29 c6, which Veselin Topalov thought was very good for White, instead opting for 29 Qb7 for a slightly better pawn structure. Later she conceded a pawn to Valentina and her position became worse. After the time control, Valentina pushed a pawn to f3 and this enabled her to mount a successful attack on the white king which concluded the game. 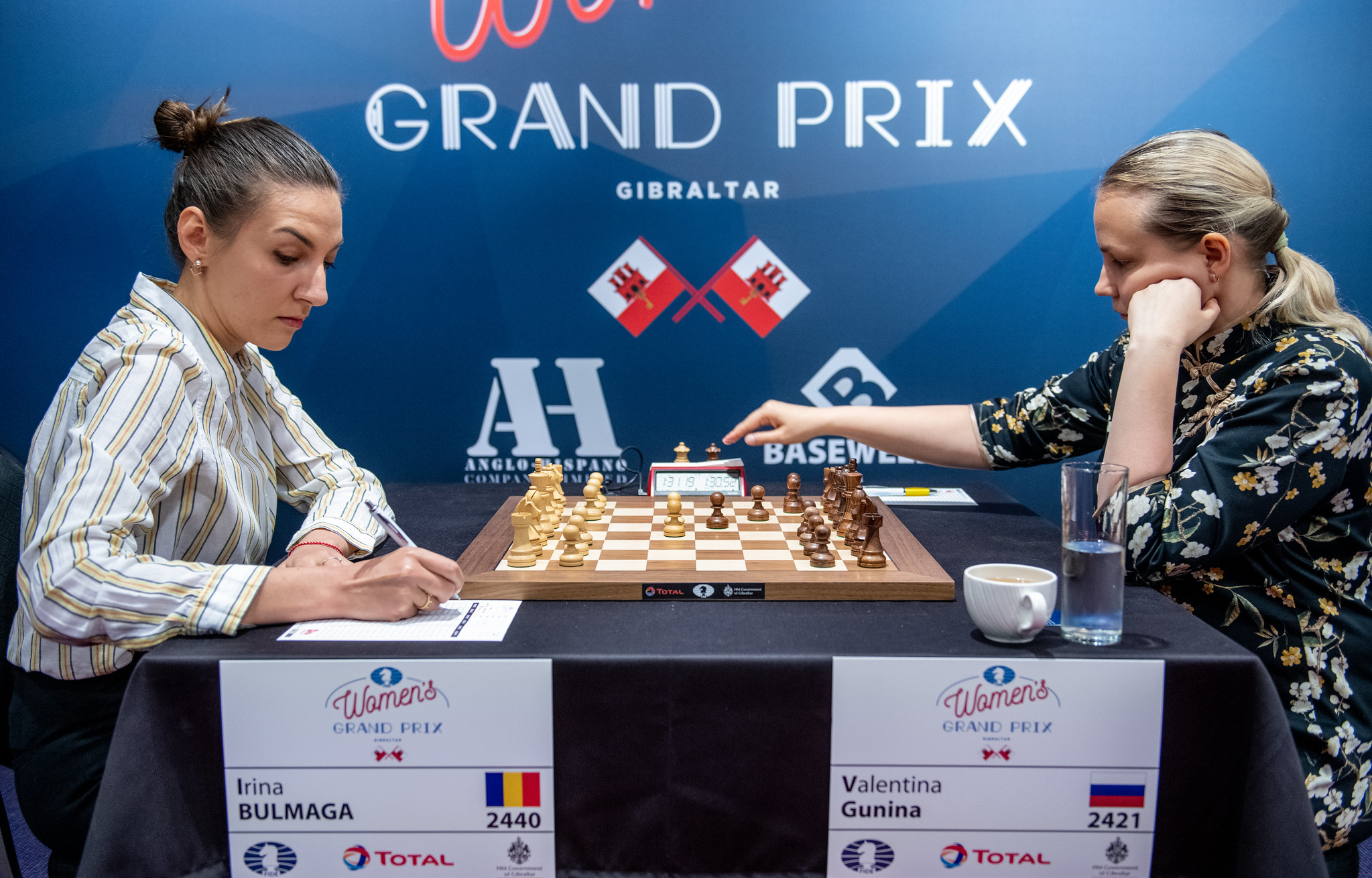 The round had started inauspiciously with a quick draw in 15 moves and around 35 minutes between Elisabeth Paehtz (GER) and Anna Muzychuk (UKR) in a Grünfeld Defence. This seems to indicate that Anna has given up on her rapidly dwindling chances of qualifying for the Candidates' tournament.

Round 9 is on Monday 31 May at 15.00 CET. Live transmission, with Veselin Topalov and Fiona Steil-Antoni, may be found at https://www.gibchess.com/wgp2021-live-commentary