John Saunders reports: Zhansaya Abdumalik (KAZ) and Mariya Muzychuk (UKR) are the co-leaders going into the rest day of the Gibraltar leg of the FIDE Women’s Grand Prix which took place at the Caleta Hotel on 27 May 2021. Zhansaya and Mariya drew their game to move to 4½ out of 6, and are followed by Kateryna Lagno (RUS) on 4. 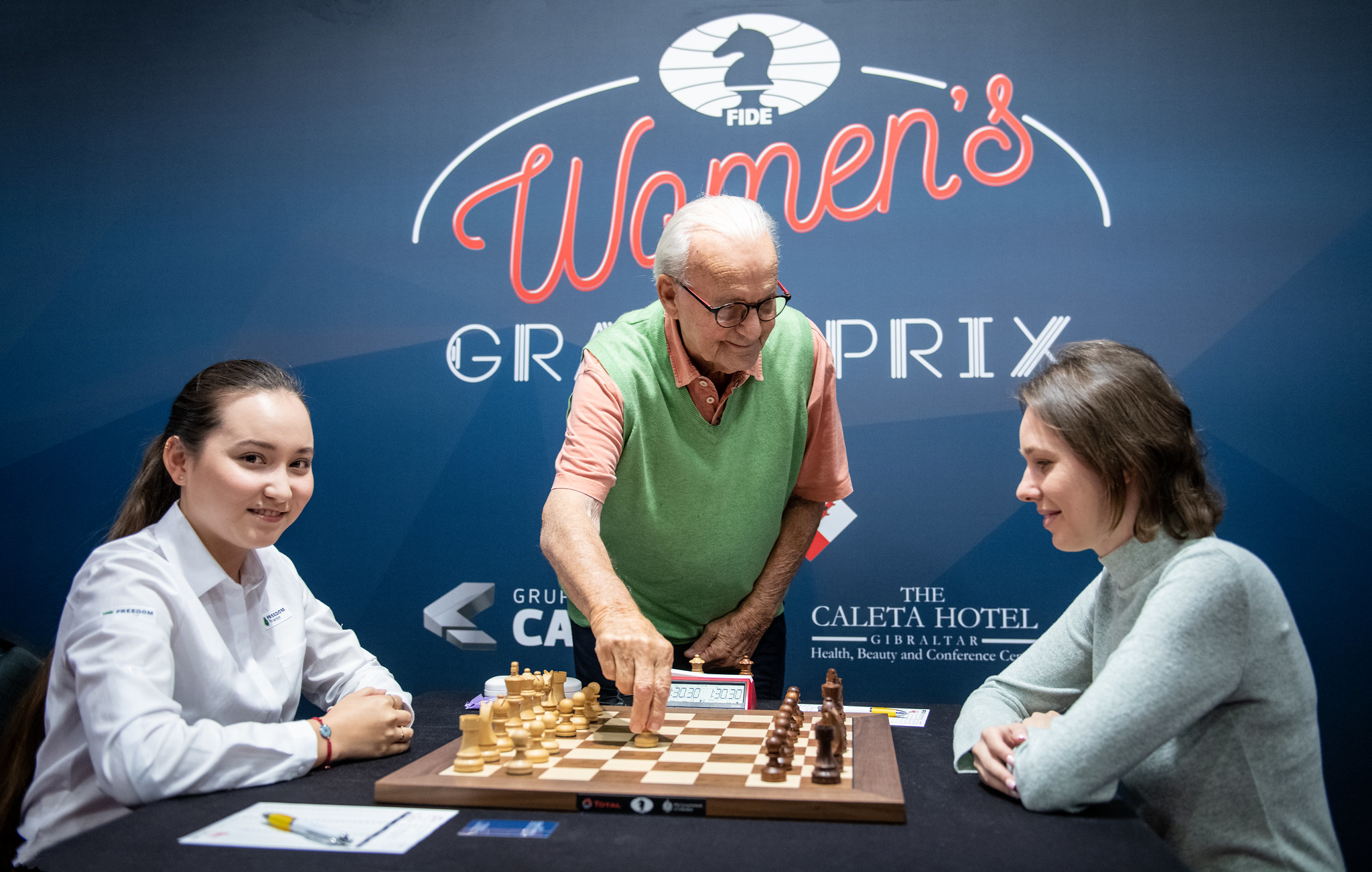 The round started quietly but we were in for a rousing finale when Elisabeth Paehtz (GER) and Valentina Gunina (RUS) played out an exciting second session. We’ll leave that till last.

The first game to finish was a quiet draw in a Grünfeld between Dinara Saduakassova (KAZ) and Kateryna Lagno (RUS). Dinara has had a tough tournament and perhaps wants to refocus on the rest day and see what she can achieve in the final five rounds. Kateryna is playing cautiously, with one eye on her rivals for the Candidates’ place that is sure to be available from the Gibraltar tournament. 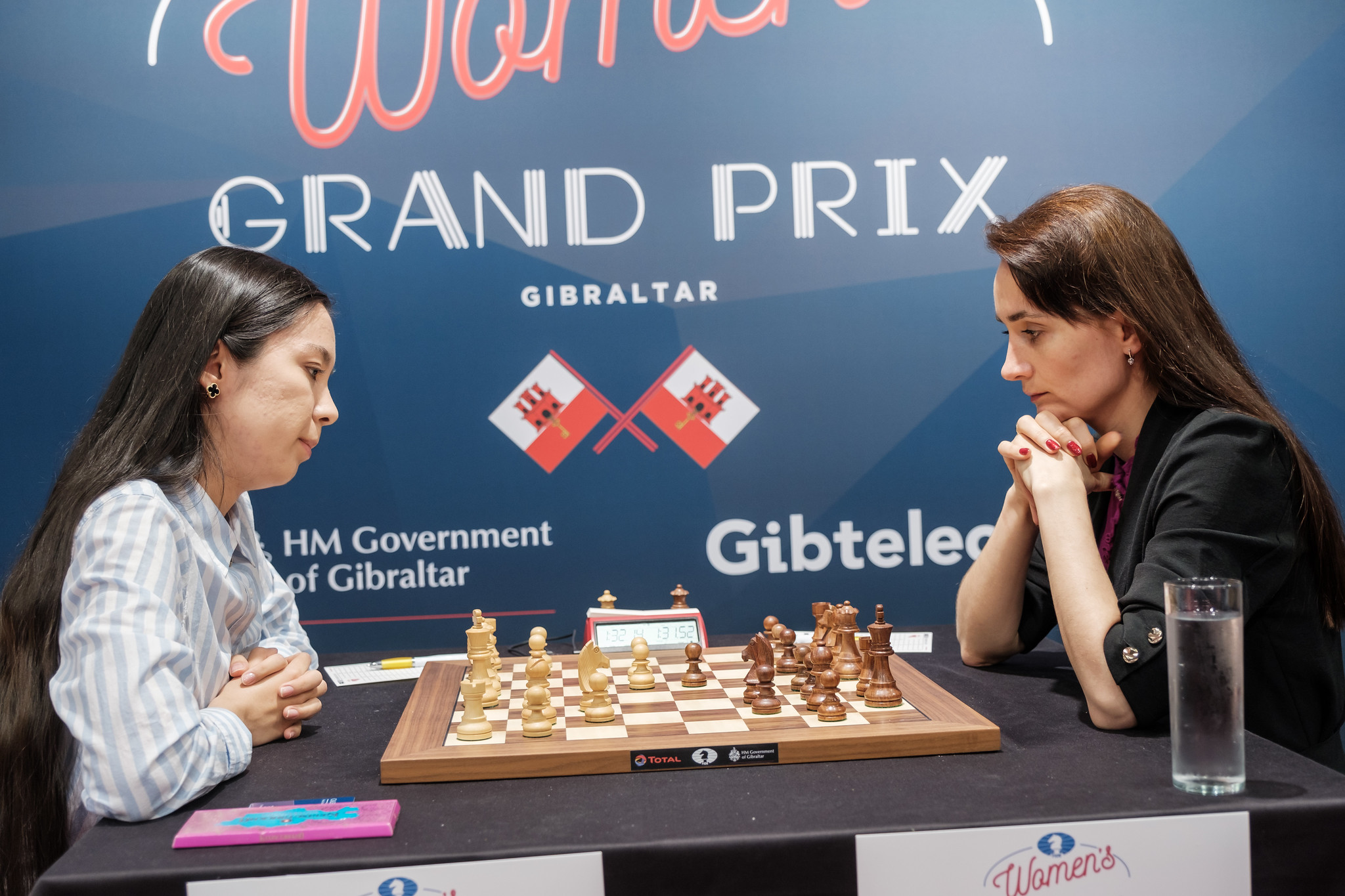 A second draw followed between Antoaneta Stefanova and Anna Muzychuk. This started life as a QGD, with some resemblance to a c3 Sicilian in due course. A cagey game ensured, with both players steering clear danger.

The third game to finish was the clash between the two tournament leaders, Zhansaya Abdumalik and Mariya Muzychuk. In a Bb5 Sicilian, both players castled kingside, with Mariya (Black) advancing her kingside pawns nevertheless, and Zhansaya countering in the centre. Material gradually disappeared from the board and the players agreed a draw as the game moved towards a level rook endgame. 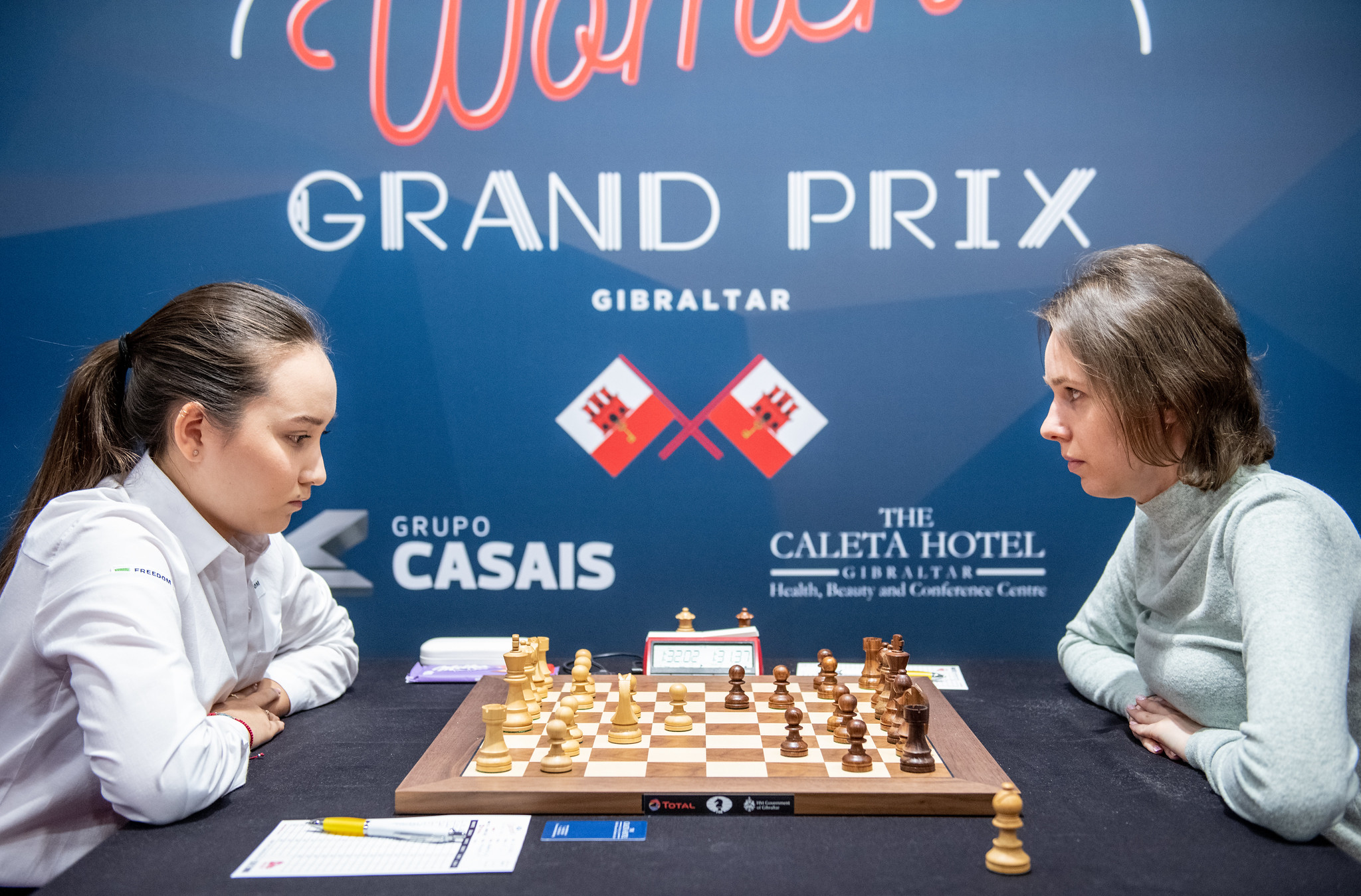 Finally, after around three hours’ play, we saw a couple of decisive games. I think it’s fair to say that both were as a result of oversights and perhaps some tiredness after six solid days of uncompromising chess. Alina Kashlinskaya, after playing a Petroff Defence, miscalculated a long variation and was stunned when Gunay Mammadzada played a temporary queen sacrifice to win material. Or perhaps Alina missed an intermezzo check in an even longer variation. This was another blow for the Russian player who has had a nightmare tournament. Let’s hope she can recover after the rest day. At the same time we must congratulate Gunay for her tactical opportunism and energetic play. She followed up her win of material accurately and efficiently.

Nana Dzagnidze tried an unusual line of the Sicilian against Irina Bulmaga but it paid off handsomely as she emerged with a comfortable position from the opening. Nana said she didn’t like Irina’s move 10 Qd3. It was interesting that analysis engines disagreed with her at first, but then came round to Nana’s way of thinking after a few more moves. Nana felt confident she was better after she placed her bishop on e5. Irina’s position worsened by the move and she tried a piece sacrifice with 20 Bxd5, but it achieved little and the rest of the game proved to be a technical mopping up operation. 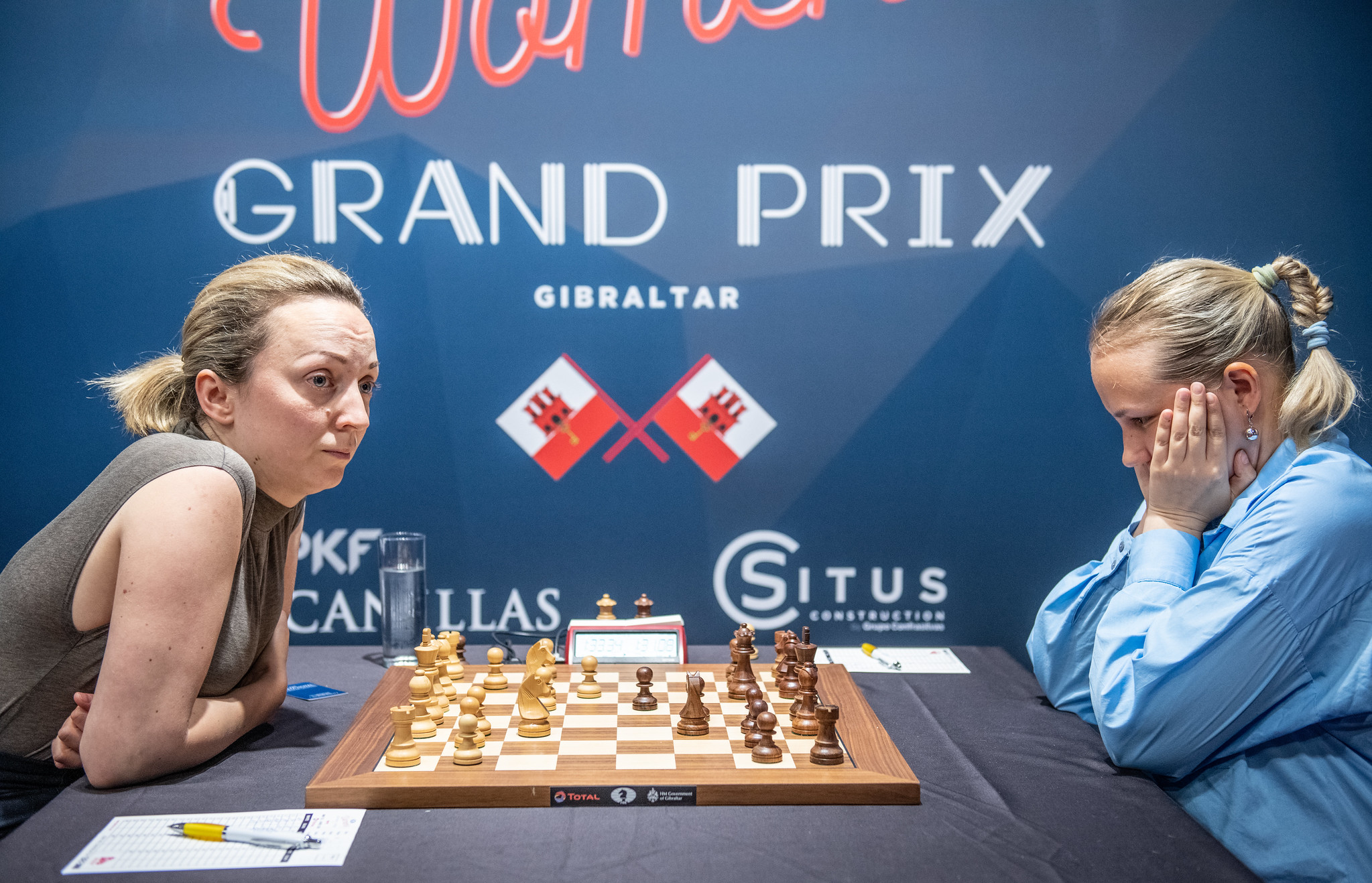 The game of the day was also the longest. Elisabeth Paehtz’s game against Valentina Gunina began with an unusual line of the Caro-Kann. After queens were exchanged, Elisabeth emerged with a spatial advantage which she maintained well into the middlegame. Her prospects looked promising but then she played 32 b6. This might have been a little hasty as Valentina responded with a very clever exchange for pawn sacrifice which received the analysis engine’s seal of approval. As the players reached the time control, Black was arguably a little better, with two passed pawns ably supported by two bishops.

The game still might have turned out a draw, but Elisabeth made a further mistake and Valentina’s demon bishops started to menace her king like vultures. White’s king found itself herded to the side of the board as the black bishops and rook circled. The problem for Elisabeth was that she was so short of time and her defensive moves rather harder to find than Valentina’s attacking ones. Sure enough, as her time ebbed away, Valentina found a way through Elisabeth’s various tactical tricks to escape the net and mated the white king. It was an exhausting game for both players. Even in victory, Valentina was still in shock as she left the playing hall and didn’t utter a word until I began the interview.

Before the Gibraltar tournament, Humpy Koneru, who is not playing here, was in second place with 293 points. Three Gibraltar contestants, Nana Dzagnidze (180), Kateryna Lagno (180) and Anna Muzychuk (165) can still pass her score with a first or second place, but that would only push the Indian grandmaster down to third place, which still qualifies. Thus it would need two of the above names to finish first and second, or share first place, to deprive Humpy Koneru of a spot in the Candidates. 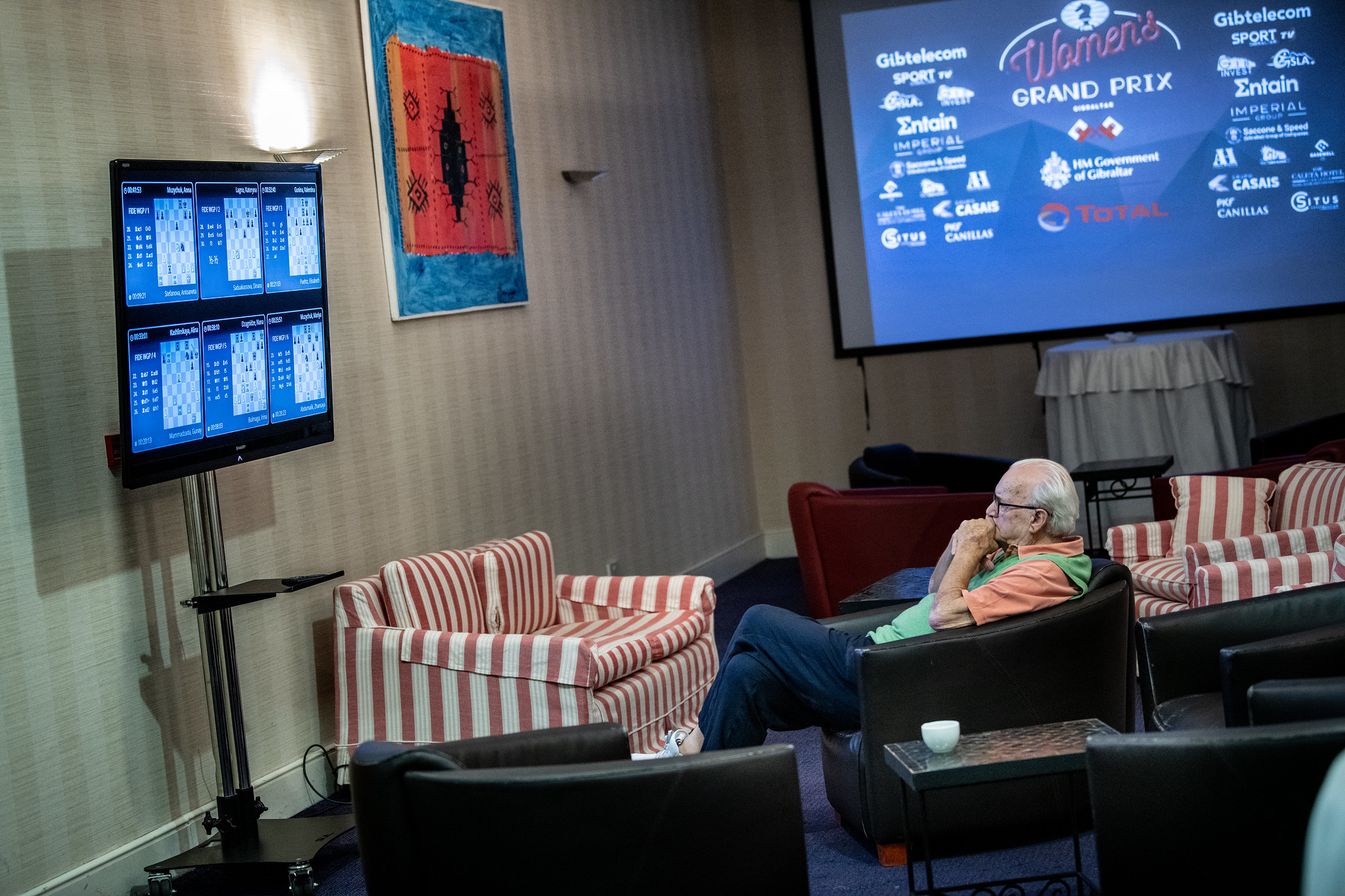 Another Gibraltar non-participant, Alexandra Kosteniuk, currently has 193 Grand Prix points to be in third place. But, to qualify, she would need all three Gibraltar participants cited above to score fewer than 13 points. Sadly for Alexandra, this is not mathematically possible as the player who finishes last in Gibraltar scores 10 Grand Prix points but, fatal to Alexandra’s aspirations, the 11th placed finisher scores 20 points. Even if two of the above players were to tie for last, they would still score 15 points each and overtake Alexandra. This means that at least one player currently in the Gibraltar line-up must overtake Alexandra and qualify for the Candidates from Gibraltar.

As well as Nana, Kateryna and Anna, a fourth player in the line-up has a theoretical chance of qualifying for the Candidates. This is Alina Kashlinskaya of Russia. However, with her current score, her chance is very slim unless she can mount a finish to rival her storming tournament performance in the Isle of Man in 2018. Note that substitute players cannot qualify for the Candidates. This is why Zhansaya Abdumalik, currently doing well in Gibraltar and with 110 Grand Prix points from an earlier event, is not in the running for a place in the Candidates.

The rest day is on Friday 28 May. Round 7 is on Saturday 29 May at 15.00 GMT+2, after which former world champion Veselin Topalov takes over commentary duties from Nigel Short.

Where players tie on the same game points, they divide the GP points (e.g. equal 1st with two players - 145 GP points each).