John Saunders reports: Zhansaya Abdumalik, 21-year-old IM from Kazakhstan, is the sole leader on two points after round two of the Gibraltar leg of the FIDE Women’s Grand Prix was played at the Caleta Hotel on 23 May 2021. There are four players on 1½ points: Gunay Mammadzada (Azerbaijan), Mariya Muzychuk (Ukraine), Kateryna Lagno (Russia) and Antoaneta Stefanova (Bulgaria).

The round was opened by the Governor of Gibraltar, His Excellency Sir David Steel, who expressed his gratitude to the players. “Thank you for coming so far to play in this magnificent tournament. Chess and Gibraltar go hand in hand: not quite as much, perhaps, as chess and Russia, chess and Azerbaijan, chess in Bulgaria, but quite close - we’re catching up. And you have come to Gibraltar at a time when Gibraltar is opening up after the pandemic and you have come, some of you a very long way, to be here.” 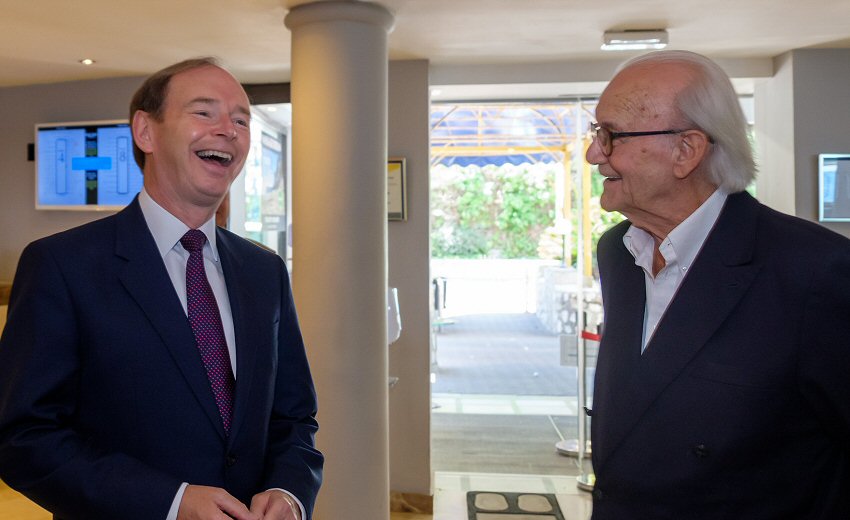 Today we were also pleased to welcome back the founder and long-time organiser of the Gibraltar Chess Festival, Mr Brian Callaghan without whose untiring efforts major tournament chess would never have established a home in Gibraltar and pictured above (right) with His Excellency Vice Admiral Sir David Steel, KBE, DL, governor to Gibraltar.

The first result of the day was a draw between Anna Muzychuk and Nana Dzagnidze. This was an interesting skirmish in the Sveshnikov Sicilian, with the first decision of significance occurring on move 14 when Anna opted for 14 g4 to keep an eye on the light squares. Some cagey manoeuvres followed, as two of the highest rated players in the field jockeyed for superiority. The players safely neutralised each other’s attempts to win and by the time the queens were exchanged, the draw was in view. 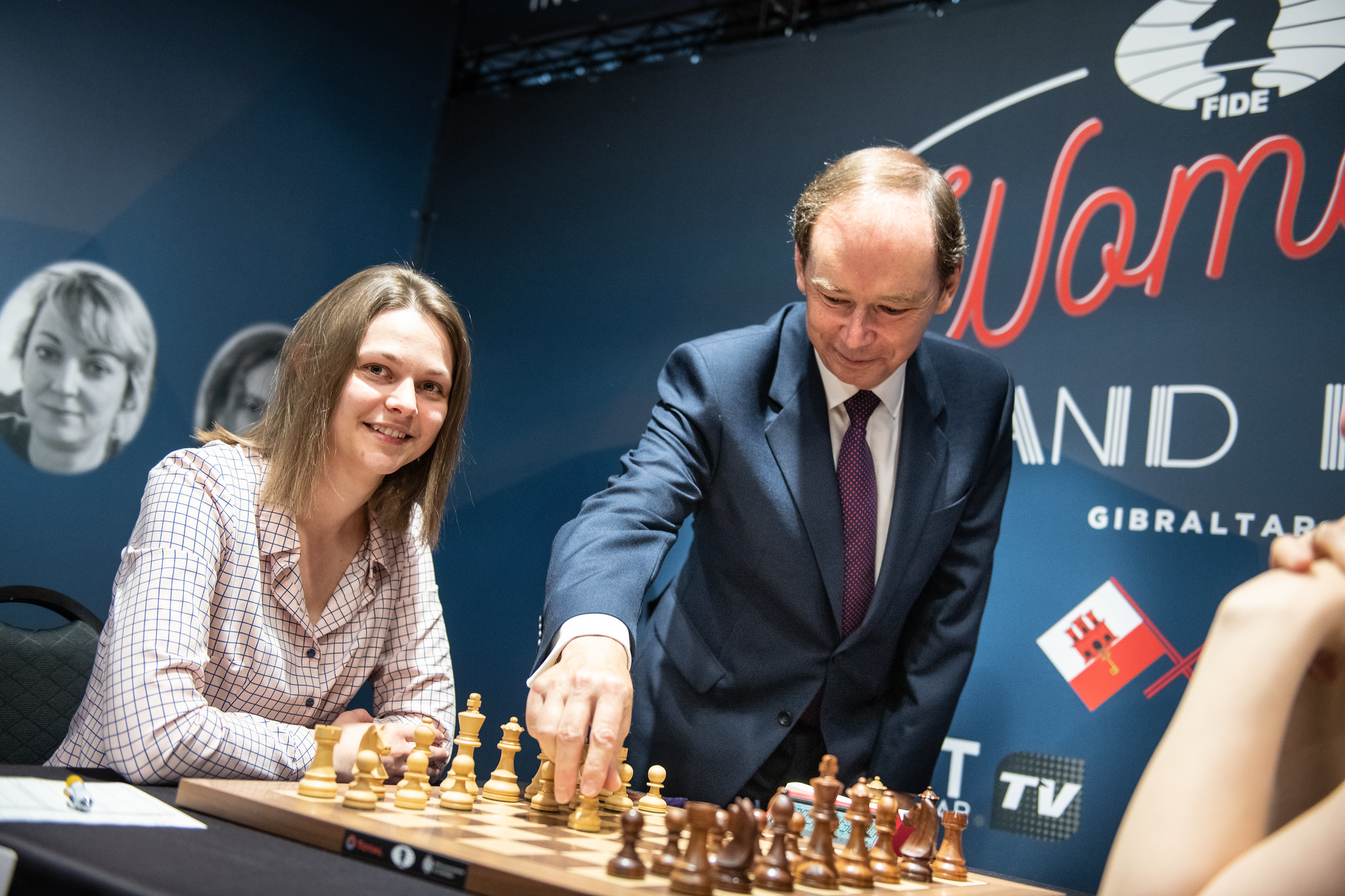 Thereafter there were terrifying quantities of blood spilt on the board, with no fewer than three players suffering a second defeat in two games. All five remaining games ended decisively, though, as in round one, not all ended in the result as first expected. Kateryna Lagno put herself in great danger of defeat as she unaccountably retreated her queen to its original square on move 12 on the white side of a Petroff defence, allowing a slow squeeze to be applied by Alina Kashlinskaya. It seemed improbable that Kateryna would get out of jail, but, as in round one, all Alina’s initial success went for naught as she snatched a hot pawn on the queenside, only to be shocked by Kateryna’s 21 Nxg7, underpinned by a sneaky tactic which would have won Black’s had the knight been captured. As a result, Black had to live with an ugly gash in her kingside pawn capture. Having blown a won position the day before against her other Russian colleague, poor Alina must have been suffering déjà vu and quickly subsided.

Elisabeth Paehtz and Zhansaya Abdumalik went into round two with a win apiece but it was the young Kazakh player who proceeded to a perfect 2/2 start with another assured performance. The game began with an offbeat line of the Ruy Lopez (Berlin). Zhansaya’s original development of her a8 rook, via a6 to b6 to f6, and subtly undermining White’s queenside pawn structure, impressed commentator Nigel Short, and no doubt many others. Black snagged a pawn and deftly nursed her material and positional advantage through to another victory. One is beginning to wonder whether Zhansaya might have made a breakthrough in standard during the lull caused by the global pandemic, much as Aleksandra Goryachkina did a year or two back. 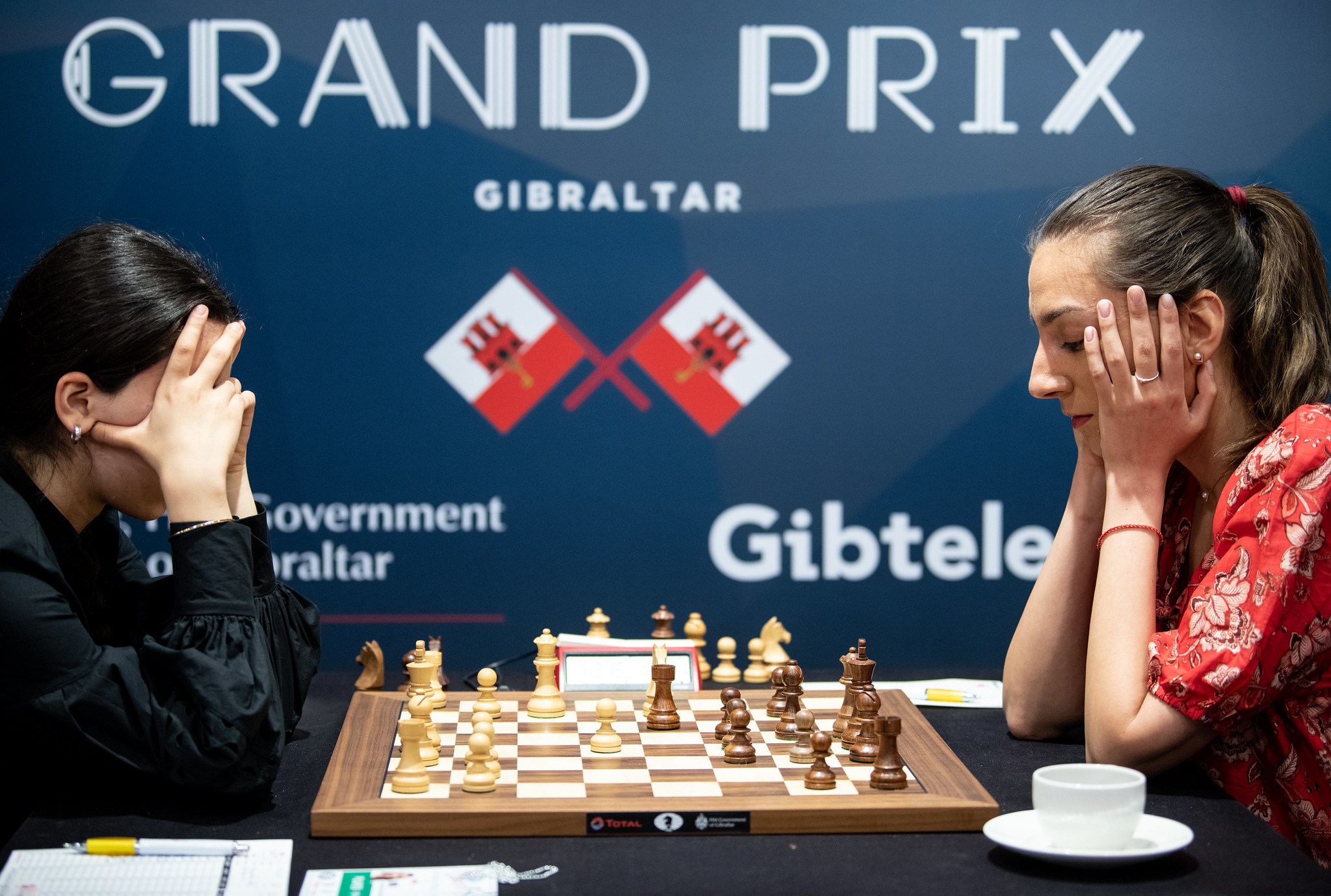 Gunay Mammadzada versus Irina Bulmaga was some sort of indeterminate Sicilian which I would hesitate to give a more specific name to. Nor am I sure I’m qualified to give an opinion on who had the advantage out of the opening, despite having the inestimable advantage of hearing Gunay’s enthusiastic demonstration of the game at close quarters in the media centre. Gunay seemed to relish the cut and thrust of the ensuing battle as both players descended into serious time trouble with only seconds left on their clocks. “It was more like a bullet game, then,” I observed to her and she agreed. Unsurprisingly, engines signalled wild swings of fortune during the period between move 23 and the time control. Black missed one golden opportunity with 26...Rh6 and once again the engine informs us that 33...Kb8 was a killer. Gunay herself felt sure without benefit of engine analysis that 38...Qb5 represented another move that might have won for Black. Sadly for her, Irina missed all of these shots, and yet I cannot be sorry as otherwise I wouldn’t have been treated to Gunay’s entertaining exposition of this encounter. 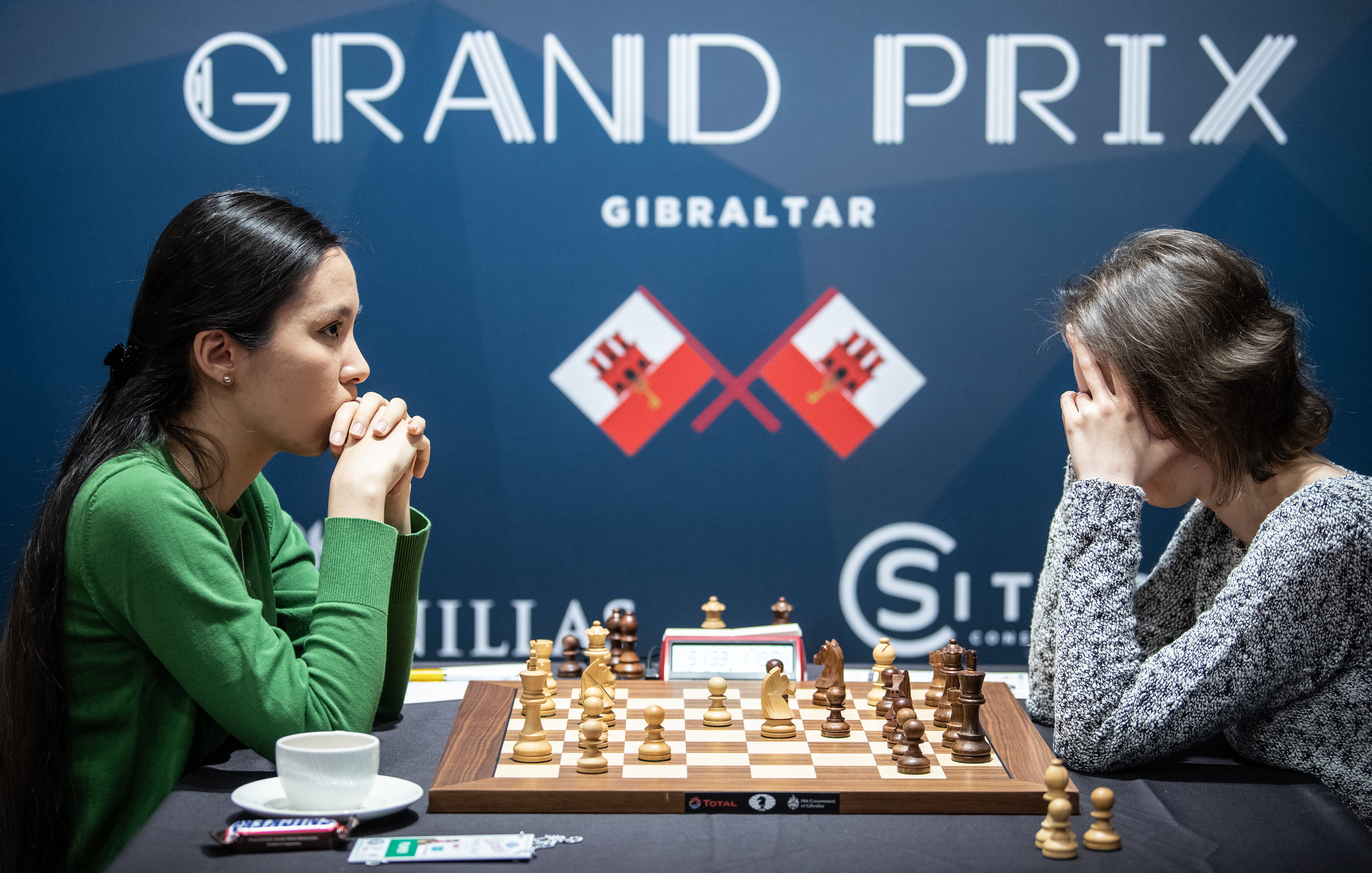 The game between Dinara Saduakassova and Mariya Muzychuk was a Catalan which followed a game between Deac and Gavrilescu from the Romanian Championship less than a month ago for some 15 moves, which I guess makes it hot theory. It could also be described as one of those unusual Queen’s Gambits where Black hangs on grimly to the gambit pawn. Instructional manuals always used to be full of such games where Black is punished for such greediness, but whatever positional compensation Dinara gained for the pawn never quite materialised. Perhaps things mightn’t have been so bad had not Dinara retreated her knight to the a1 square where it looked decidedly unhappy. She then made the decision to hoover off the rooks to leave a most unpromising knight endgame, and she soon succumbed. 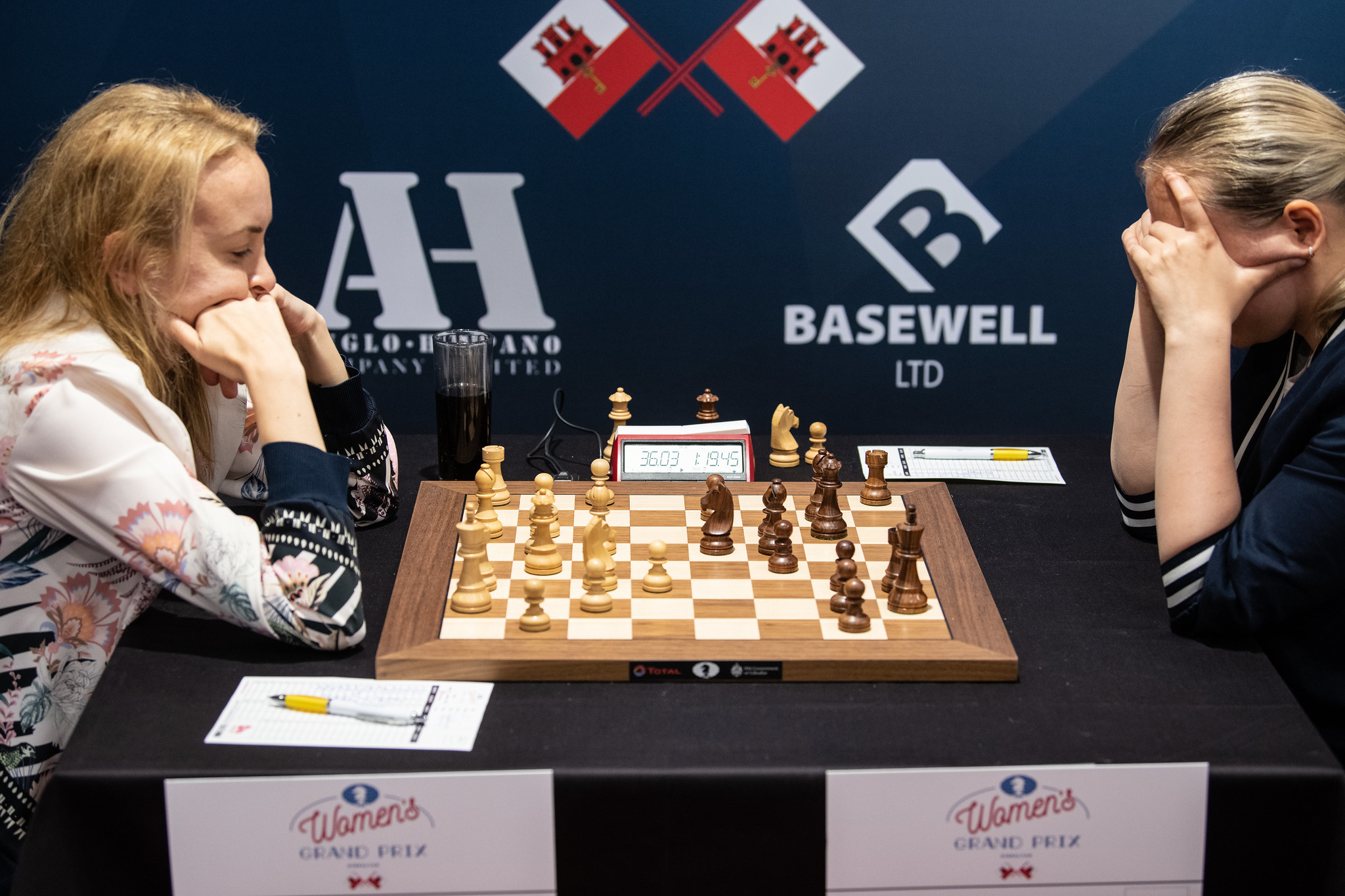 The final game to finish was a slightly old-fashioned Caro-Kann between Antoaneta Stefanova and Valentina Gunina. Though Valentina professed to having “slept like a baby” the night before after her earlier travel woes, perhaps they caught up with her in round two. Things started getting interesting around move 18 or 19, as it became a question of whether the black bishop on b7 could exploit the white squares around White’s exposed king or whether White’s two bishops might cooperate to harass Black’s vulnerable kingside. A few moves down the line, Black’s choice of 21...g6 looked unhealthy on the long black diagonal. White even had the luxury of snaffling the b5-pawn. Talking about it afterwards, Antoaneta Stefanova felt confident of ultimate success once she had engineered a queen exchange. Just before the time trouble, Valentina compromised her position further, allowing White’s to work together to secure a winning material advantage.