John Saunders reports: Zhansaya Abdumalik (Kazakhstan), having already secured first place in round 10, drew smoothly with Anna Muzychuk (Ukraine) in the last round of the Gibraltar leg of the FIDE Women’s Grand Prix to finish on a commanding score of 8½/11, 1½ points clear of the field. Kateryna Lagno of Russia drew her game with Mariya Muzychuk of Ukraine to finish on 6½ and clinch her place in the Candidates’ tournament alongside Humpy Koneru, who also qualifies via the Grand Prix series, and Aleksandra Goryachkina of Russia, who qualifies as runner-up in the last Women’s World Championship. Second in the tournament was Mariya Muzychuk on 7 points, with Kateryna Lagno sharing third with Gunay Mammadzada of Azerbaijan, who had a fine tournament. The last round, played at the Caleta Hotel on 2 June, featured two decisive results and a second power failure in as many days, though play was only interrupted for 15 minutes. The final game between Nana Dzagnidze and Valentina Gunina, ran to more than six hours. 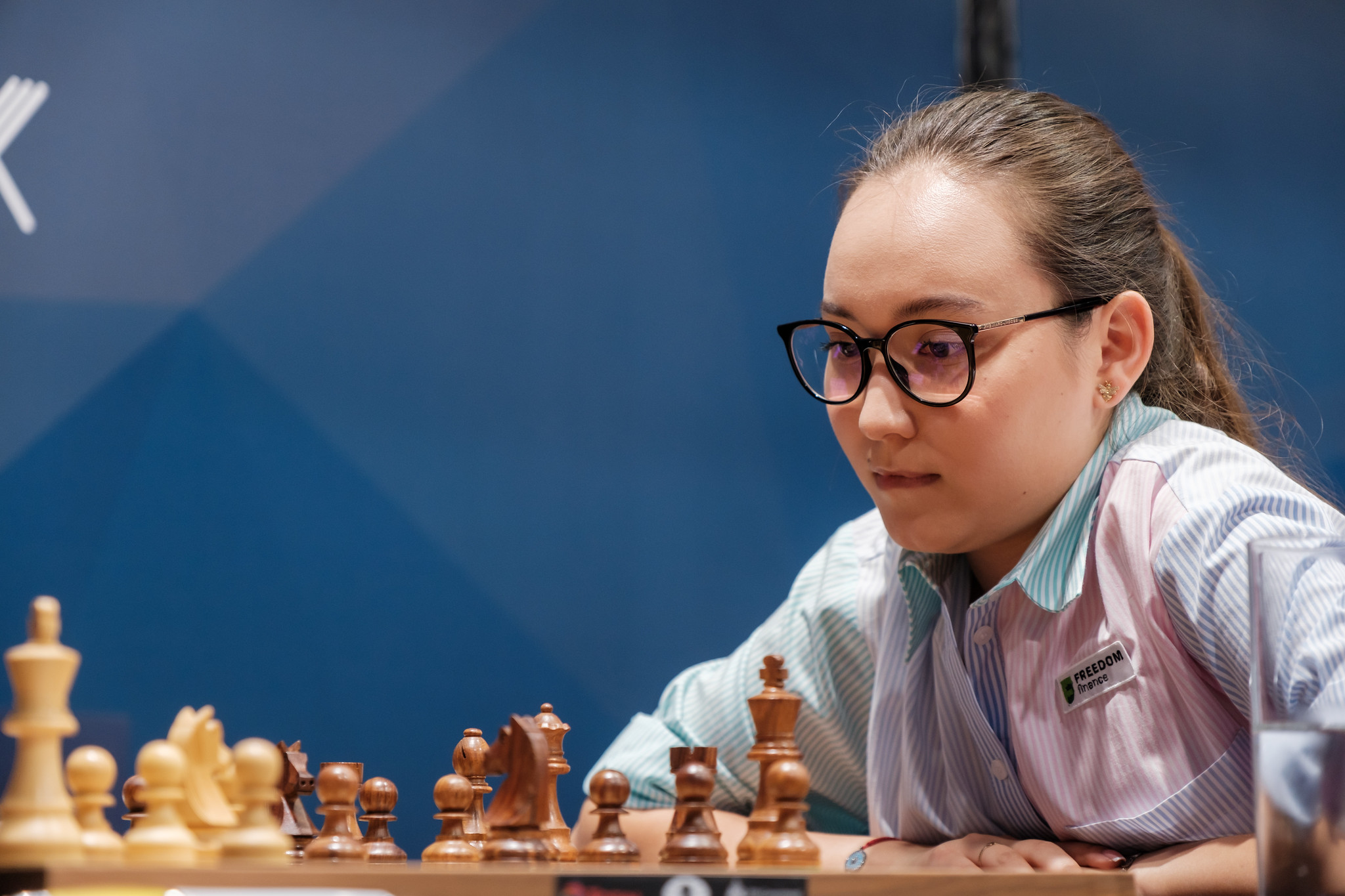 Zhansaya Abdumalik defended a standard line of the Ruy Lopez/Spanish against Anna Muzychuk. The tournament winner never looked in trouble. A pair of bishops were exchanged but otherwise all the pieces were still on the board when a repetition occurred.

Kateryna Lagno against Mariya Muzychuk, rivals for second place in the tournament, began with a Caro-Kann. It seemed a fairly sedate choice of line by the Russian player with White but Mariya opted to castle queenside and imbalance the position somewhat. At first Kateryna seemed to have the upper hand but analysis engines didn’t like her move 30 Be2, inviting Mariya to give up the exchange for two pawns. However, Mariya chose not to go in for this line, instead exchanging some material on c3 for a draw. This gave Kateryna the half point she needed to be sure of a place in the forthcoming Candidates’ tournament alongside Humpy Koneru. 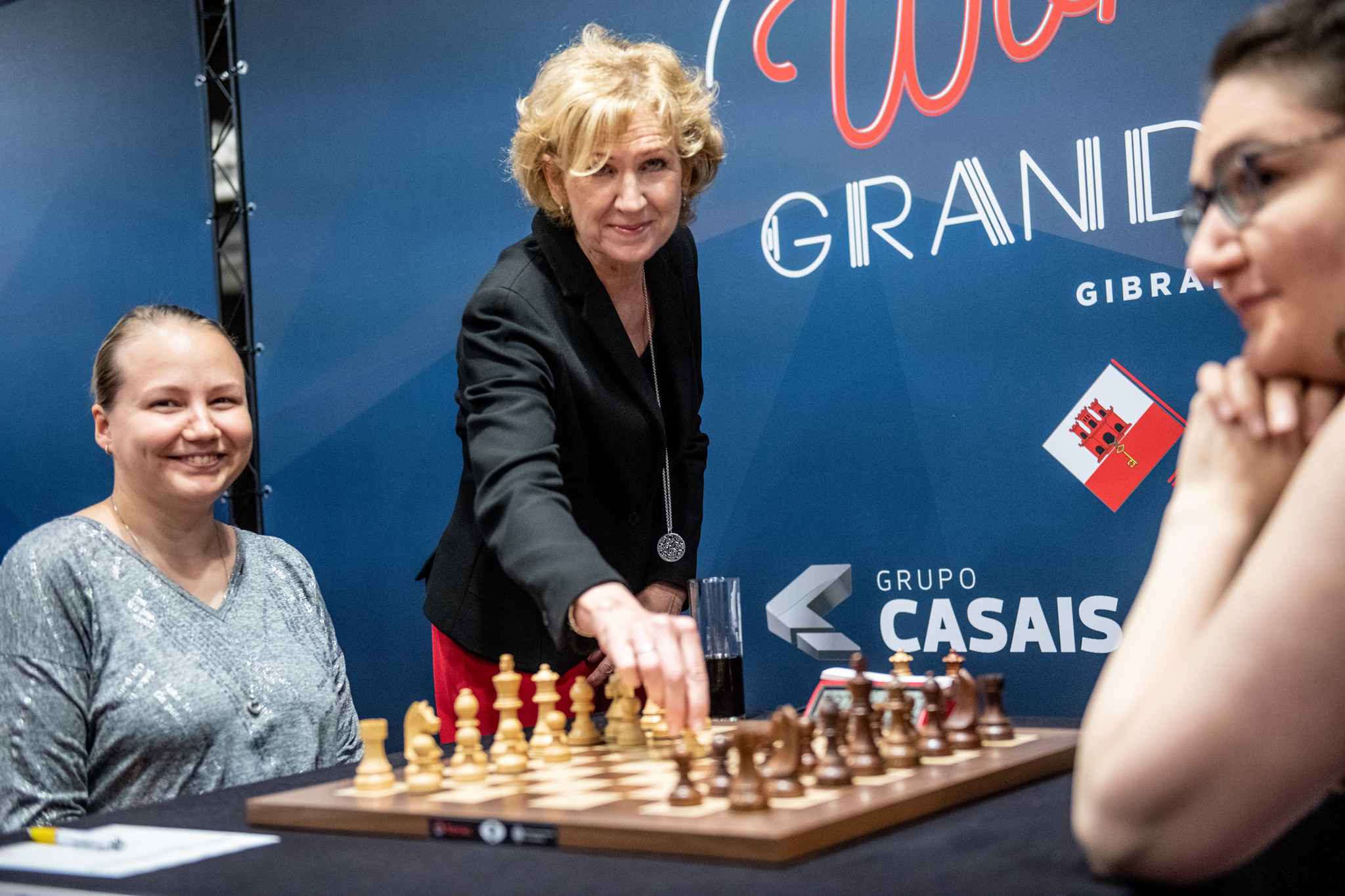 Paehtz-Mammadzada transposed into a Grünfeld. Lizzie pushed 14 d5 but two moves later Gunay captured it via a temporary piece sacrifice. It didn’t ultimately secure an extra pawn for Black, but Gunay obtained a useful positional advantage. However, somewhere Gunay missed her way and had to be content with a draw.

Kashlinskaya-Stefanova became a Cambridge Springs variation of the Queen’s Gambit Declined. Alina soon established a stable edge in the middle game, without having any obvious ways of exploiting it. Antoaneta later got into her habitual time trouble, and Alina’s advantage soon became overwhelming. Mindful of her first week’s sufferings, Alina didn’t look for a flashy finish, but it soon morphed into an easy win, enabling Alina to overtake Antoaneta in the final standings.

Dinara Saduakassova versus Irina Bulmaga was a Fianchetto King’s Indian. Dinara hit on a strong plan to work a knight via c4 and a5 to c6 where it exerted great pressure on Irina’s position and attacked a rook on b8. Irina left the rook to be taken, but Dinara decided she wanted more and played Bg5. However, she took the exchange next move. After that it was always an uphill struggle for Irina to get back into the game. When the material was much reduced, her hopes of survival might have been raised a little, but Dinara’s finish was clinical. 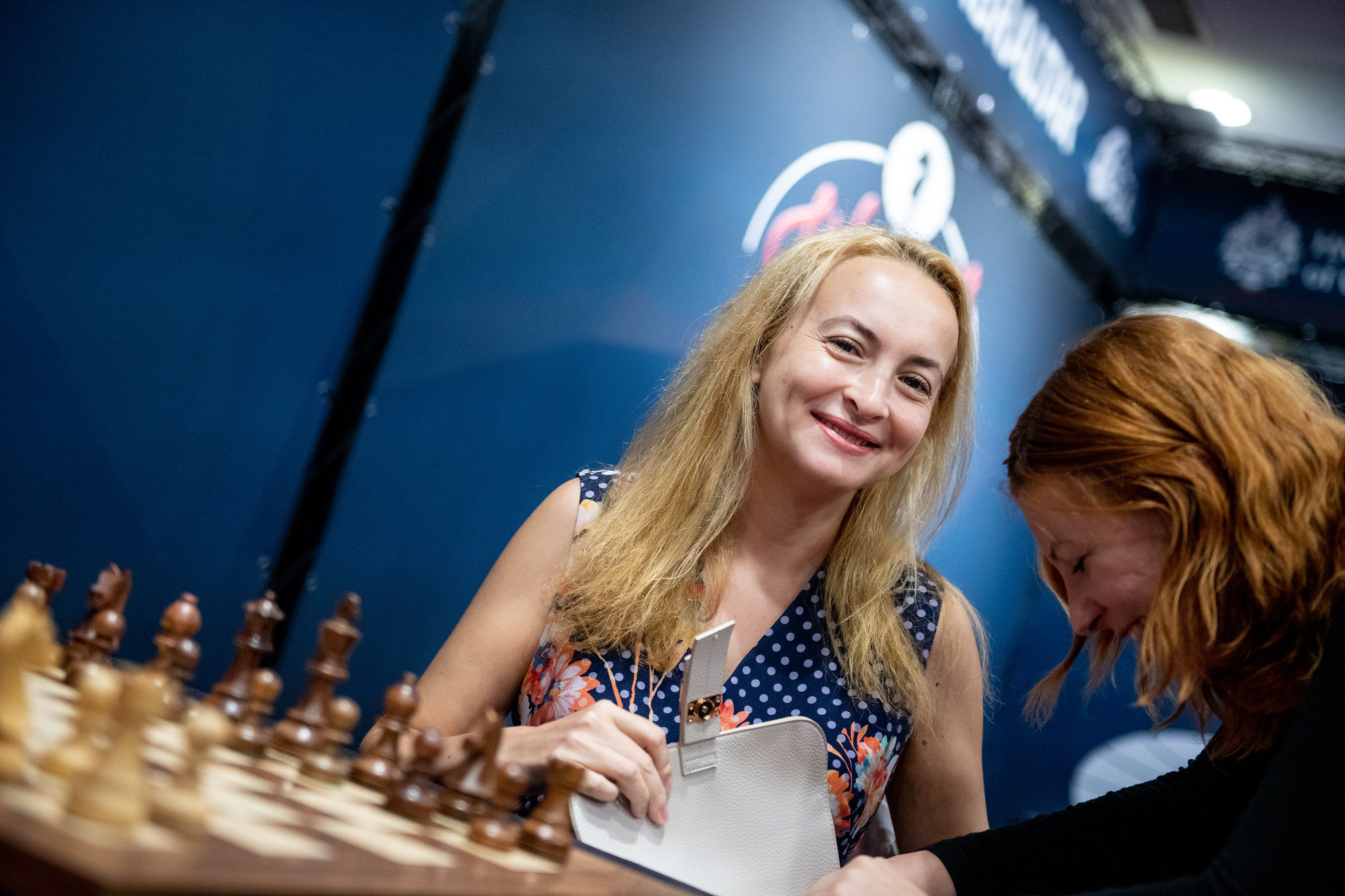 Valentina Gunina opened 1 d4 against Nana Dzagnidze, who defended with a Bogo-Indian. Nana was looking for more than a draw to preserve any chance of securing a place in the Candidates’ tournament. In the early middlegame things started to go awry for Valentina, and Nana was able to snatch a pawn with 19...Bxe2, which looked slightly hot at first sight but turned out to be fine. With an extra pawn, Nana was firmly in the driving seat but anyone who’s followed this tournament will know that Valentina fights like a tigress in every game and, of course, she battled her way into the game, Nana too is a redoubtable fighter so the final game of the tournament to finish was a battle royal, quite in keeping with the cut and thrust of the previous ten rounds. It went to 135 moves, breaking Valentina’s own record length game from the tournament and also breaking her run of decisive results.