John Saunders reports: Round 1 of the Gibraltar leg of the FIDE Women’s Grand Prix got underway at the Caleta Hotel on 22 May 2021. Thankfully, all players were present for the start, with Valentina Gunina of Russia being the last to arrive just a few hours before the round started at 3pm local time. Opening proceedings with a short address was Dana Reizniece-Ozola, managing director of FIDE. Dana holds the woman grandmaster title and herself took part in the 2010 Gibraltar Masters, later embarking on a career in politics and administration in her native Latvia. Dana made the ceremonial first move for Gunnay Mammadzada (Azerbaijan) against former women’s world champion Antoaneta Stefanova of Bulgaria. 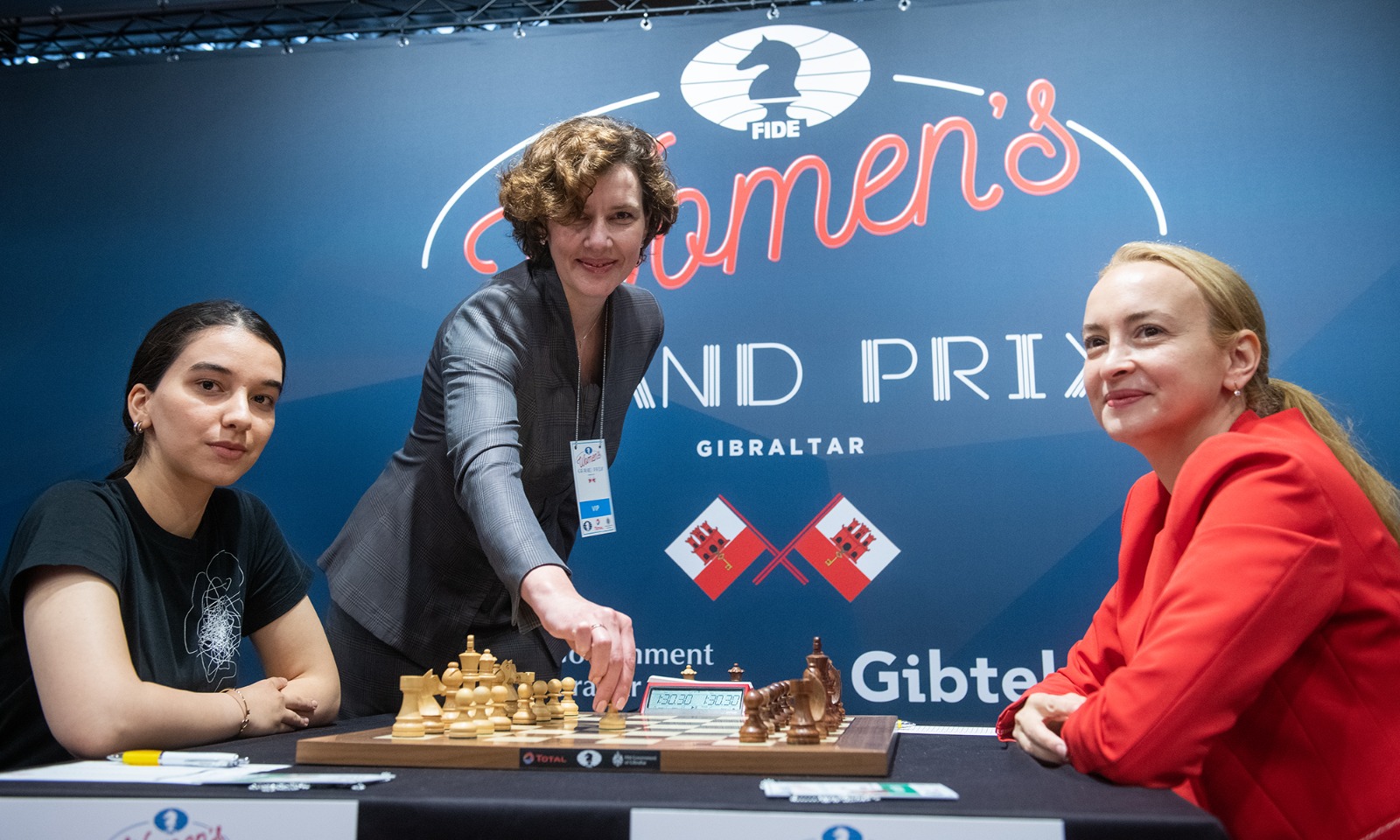 The first game to finish concluded in around half an hour as sisters Anna and Mariya Muzychuk agreed a draw. They played a sprightly line of an Anti-Marshall Ruy Lopez/Spanish opening with Black (Anna) giving up her queen to launch a minor piece assault on the white king. However, it is all been seen before and leads to a draw by perpetual check. 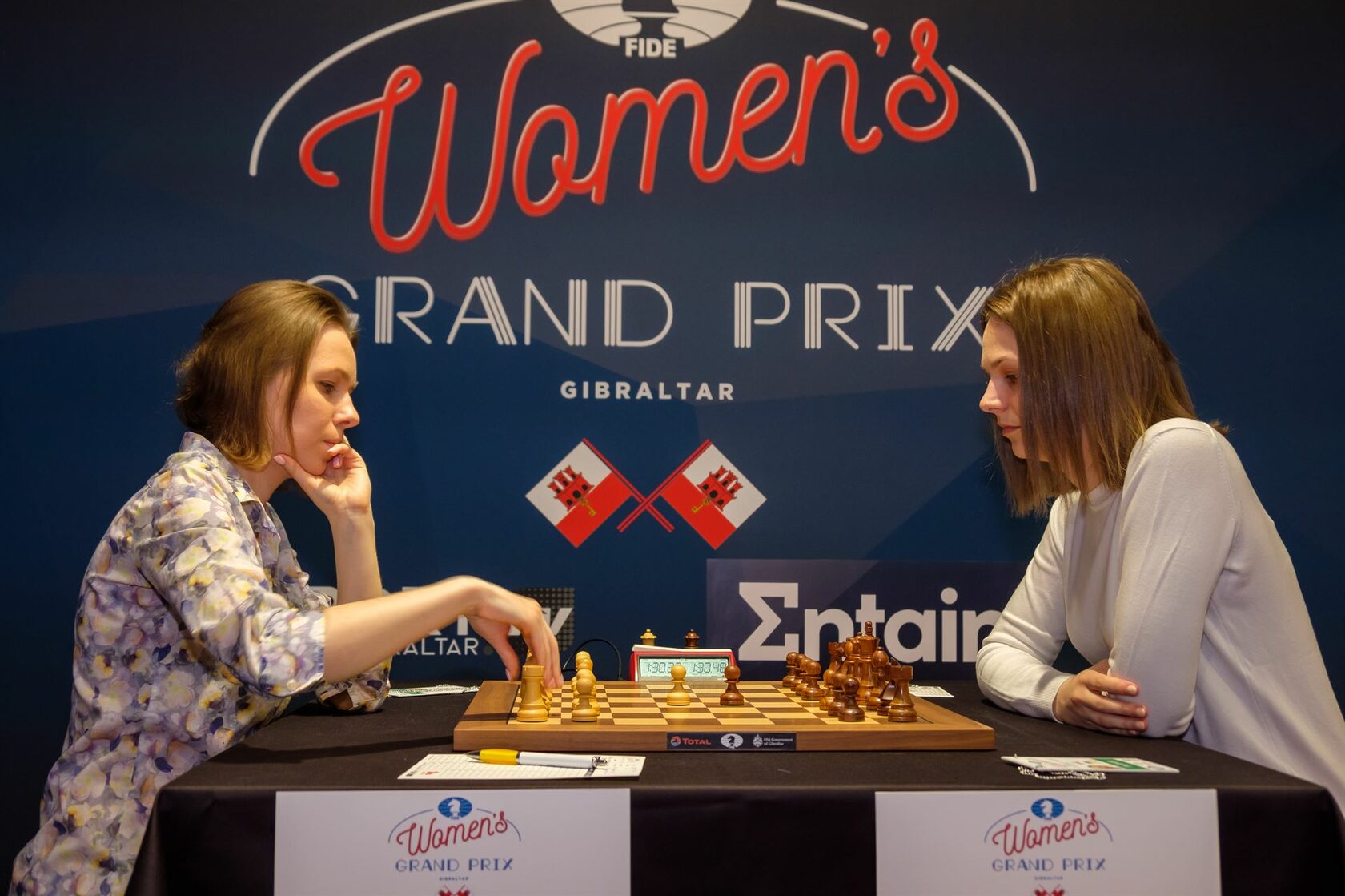 Nana Dzagnidze and Kateryna Lagno played down a lengthy theoretical variation in the Fianchetto Grünfeld. The pawn structure remained balanced, and pieces were exchanged, until such time as the queenside pawns disappeared completely after which a draw seemed inevitable. 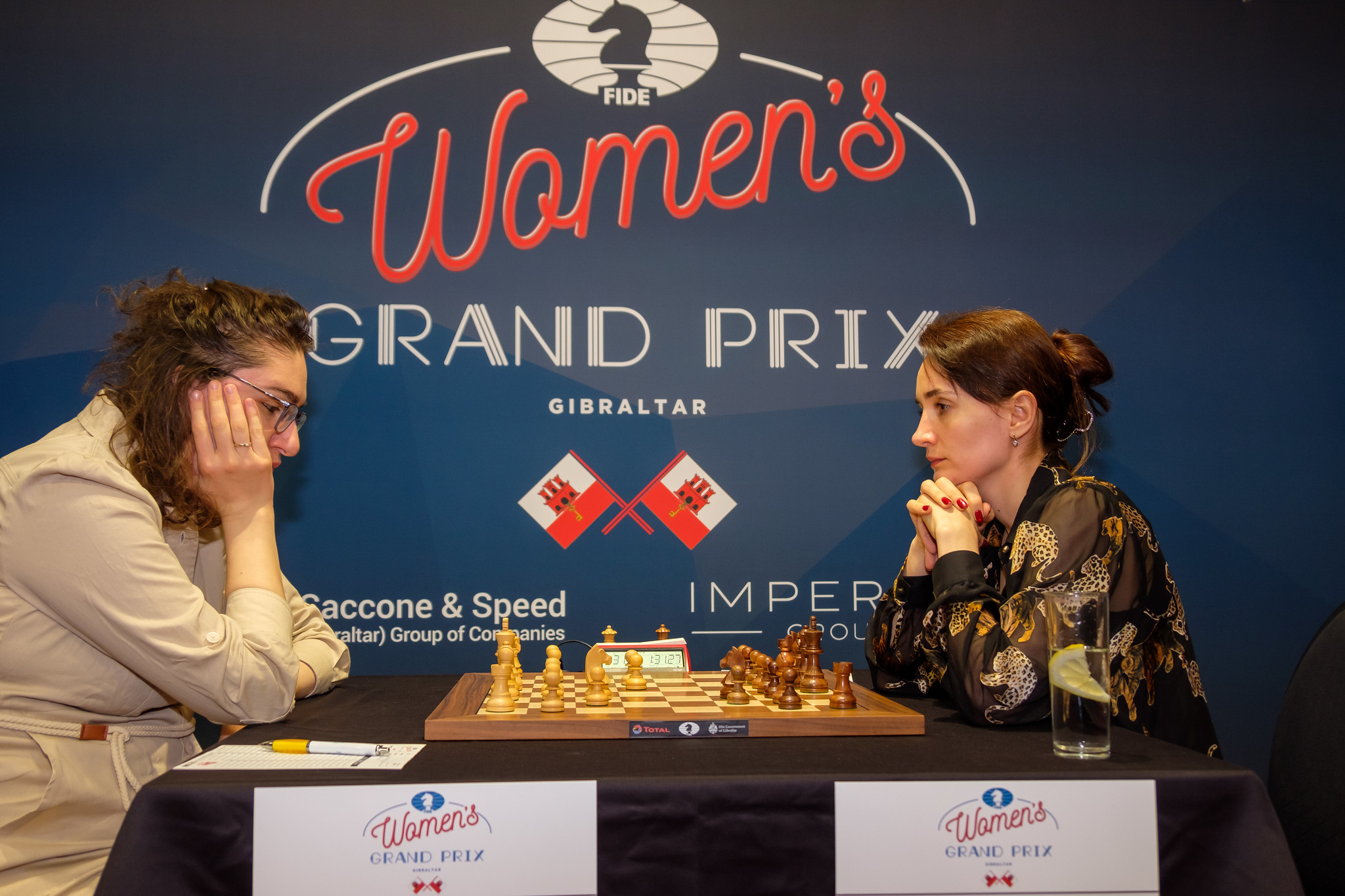 Gunay Mammadzada is perhaps a lesser known name in Western Europe, though she has played in Gibraltar once before. She lives in Baku (or ‘Chess City’ as she referred to it after her game) and will turn 21 a few days after the tournament. She found herself facing the redoubtable former women’s world champion Antoaneta Stefanova who has played in Gibraltar many times before and captains the women’s team in the annual Battle of the Sexes match held at the festival. Gunay was unfazed by her opponent’s reputation and embarked on a long line of Ruy Lopez/Spanish theory. The position had some interest but when a repetition presented itself, the players decided to agree to a draw. 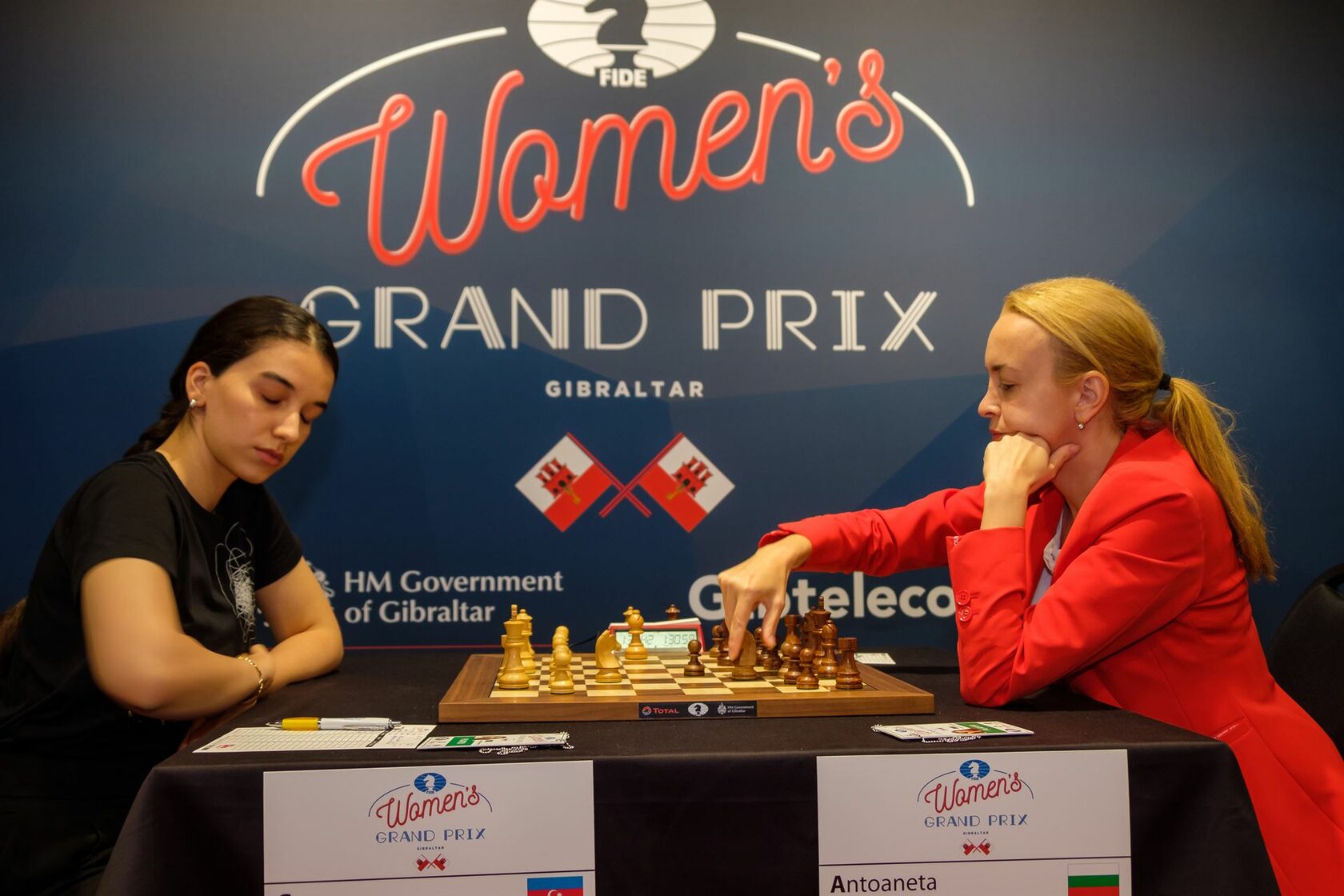 So far, three draws, but the watching audience was richly rewarded with some entertainment in the three remaining games, all of which resulted in decisive though not in the way that had seemed likely earlier in the games, at least in two cases.

As has already been mentioned, Valentina Gunina was the player to arrive in Gibraltar, after a trying journey from Russia and with only a few hours to compose herself for this important game. To be honest, it looked like it as she subsided into a poor position. Her compatriot Alina Kashlinskaya looked almost certain to win. Valentina found herself forced to surrender the exchange just to maintain some semblance of a chance. But then fortune suddenly changed: an injudicious 27 f4, attacking a knight, was countered by a clever 27...d3 intermezzo move which gave Valentina some strong play against Alina’s weak kingside structure. Still the great wheel of fortune hadn’t yet turned completely, but a further mistake (34 h3) allowed Valentina’s small commando force to run riot on the dark squares, stymieing White’s hopes of capitalising on her advanced passed pawn and threatening mate. Alina could do nothing and Valentina found herself with what in all the circumstances was the most improbable of full points. She could hardly believe it when interviewed, pronouncing herself “tired and lucky”. 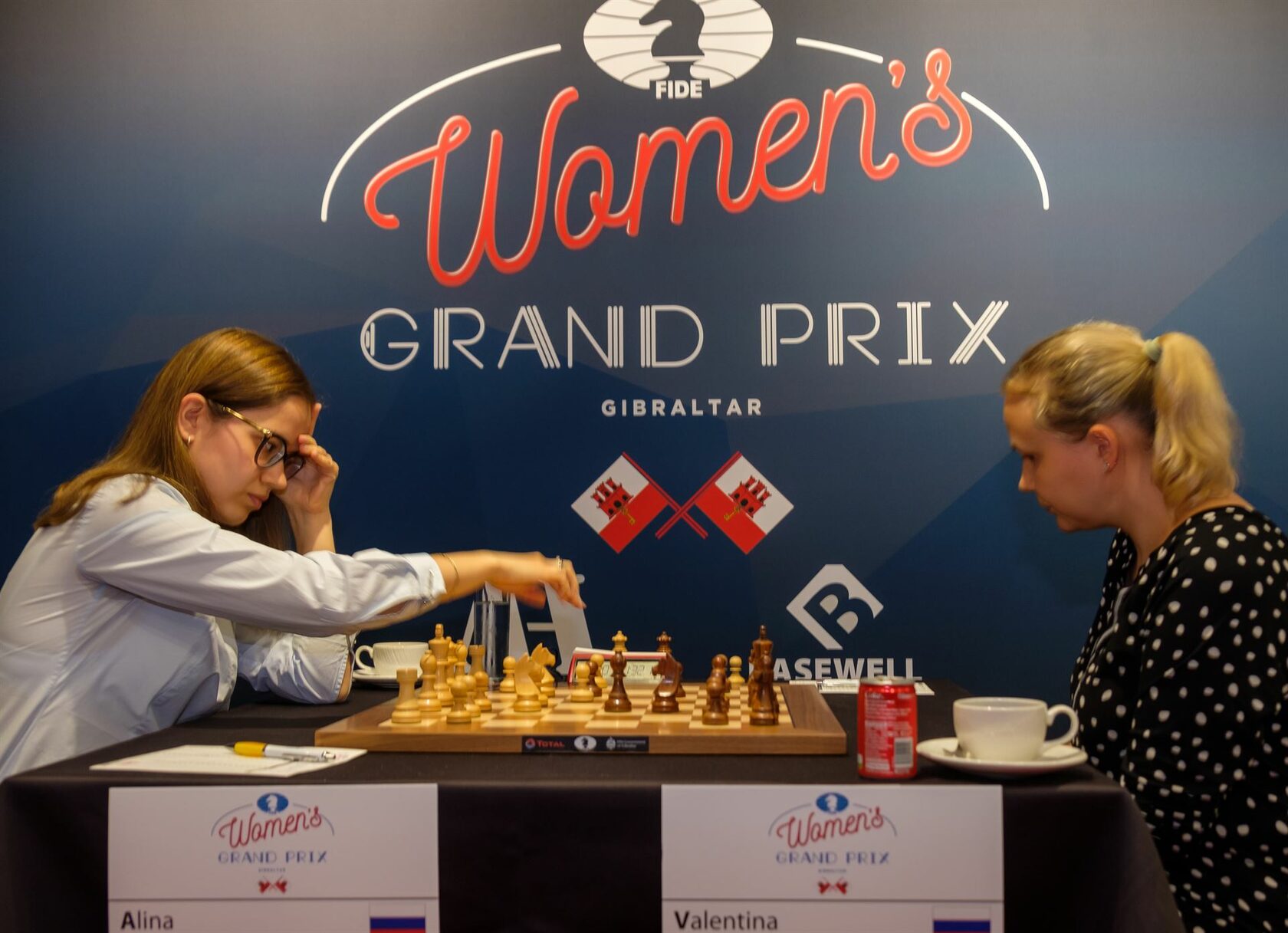 Zhansaya Abdumalik and Dinara Saduakassova fought a well-contested game which we were surprised to learn was only the second time these talented players from Kazakhstan had ever met over the board at classical chess. It took a while to catch fire after a steady Giuoco Piano opening, but then a tricky phase of play allowed Zhansaya to gain the advantage of an outside passed pawn. It didn’t look fatal by any means in the early stages, but it was impressive to see how the 21-year-old exploited and increased this positional edge against her 25-year-old rival.

The last game of the day to finish, after four and a half hours’ play was between Irina Bulmaga of Roumania and Elisabeth Paehtz of Germany. The opening was a full-blooded Najdorf Sicilian so the audience could expect a real fight from the start. When Irina’s pawn roller started to advance on Lizzie’s king down the kingside, one started to fear for the German IM’s chances. All the more so when White’s attack the weak spot at f7 more times than it could be defended. The black king was obliged to flee towards the middle of the board, where it would surely have perished but for Irina’s disastrous 38 Nd2, which allowed Lizzie to threaten mate on b2. The black king was still an open target to White’s remaining group of pieces, but none of them could land a fatal blow or even secure a perpetual checl. Lizzie’s first words after the game: “I’ve aged 100 years today.” A tough day indeed, but wonderful entertainment for the audience and a great start for the event.