John Saunders reports: If you tuned in on Friday to watch more play in the FIDE Women’s Grand Prix, you will have been very disappointed. It’s the rest day! The tournament continues with Round 7 on Saturday 29 May at 15.00 GMT+2/CET, when former world champion Veselin Topalov takes over commentary duties from Nigel Short. If you only want to read about chess, chess and more chess, come back tomorrow. However, if you want to know a bit more about what chess players and tournament staff do on their day off, stick with me. 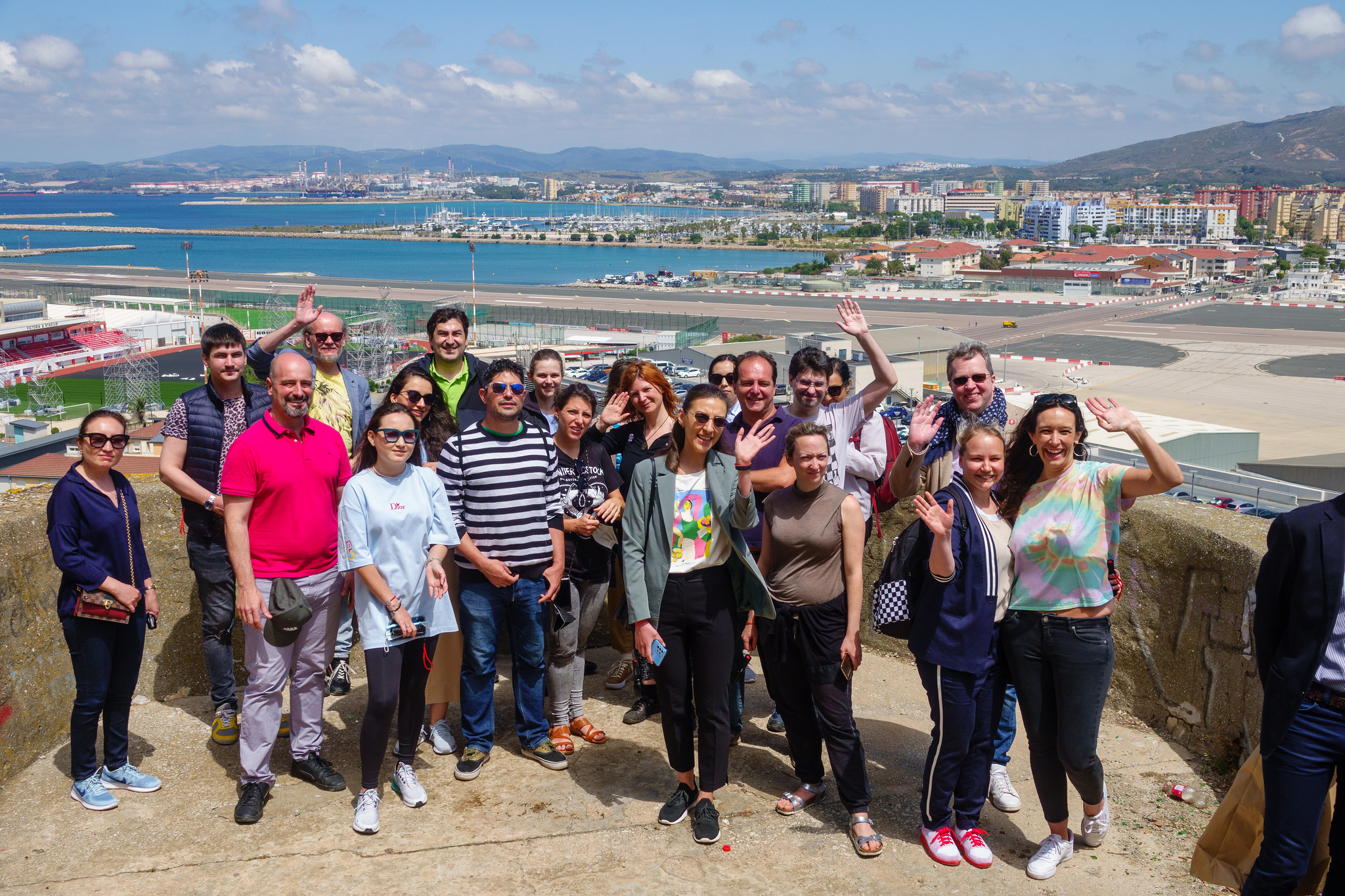 At 10.30am this morning, players, officials and media staff assembled outside the Caleta Hotel and climbed aboard a coach to take us into Gibraltar town. There we disembarked at Casemates Square, the largest and most prominent open space in the town proper, where we were met by our tour guide Carl Viagas, who is the Gibraltar government’s Projects Director. Carl is responsible for restoring Gibraltar’s Northern Defences - a part of the Upper Rock which has fallen into disrepair but is now in the process of being cleared, with a view to it becoming a heritage site. There is still some way to go with this project, but we were privileged to be given a glimpse behind the scenes, walk along the various underground passages and get a glimpse inside the various chambers and underground installations that have been built there over several centuries, right up to the Second World War. Armed with torches, we entered a bewildering series of tunnels and passages. 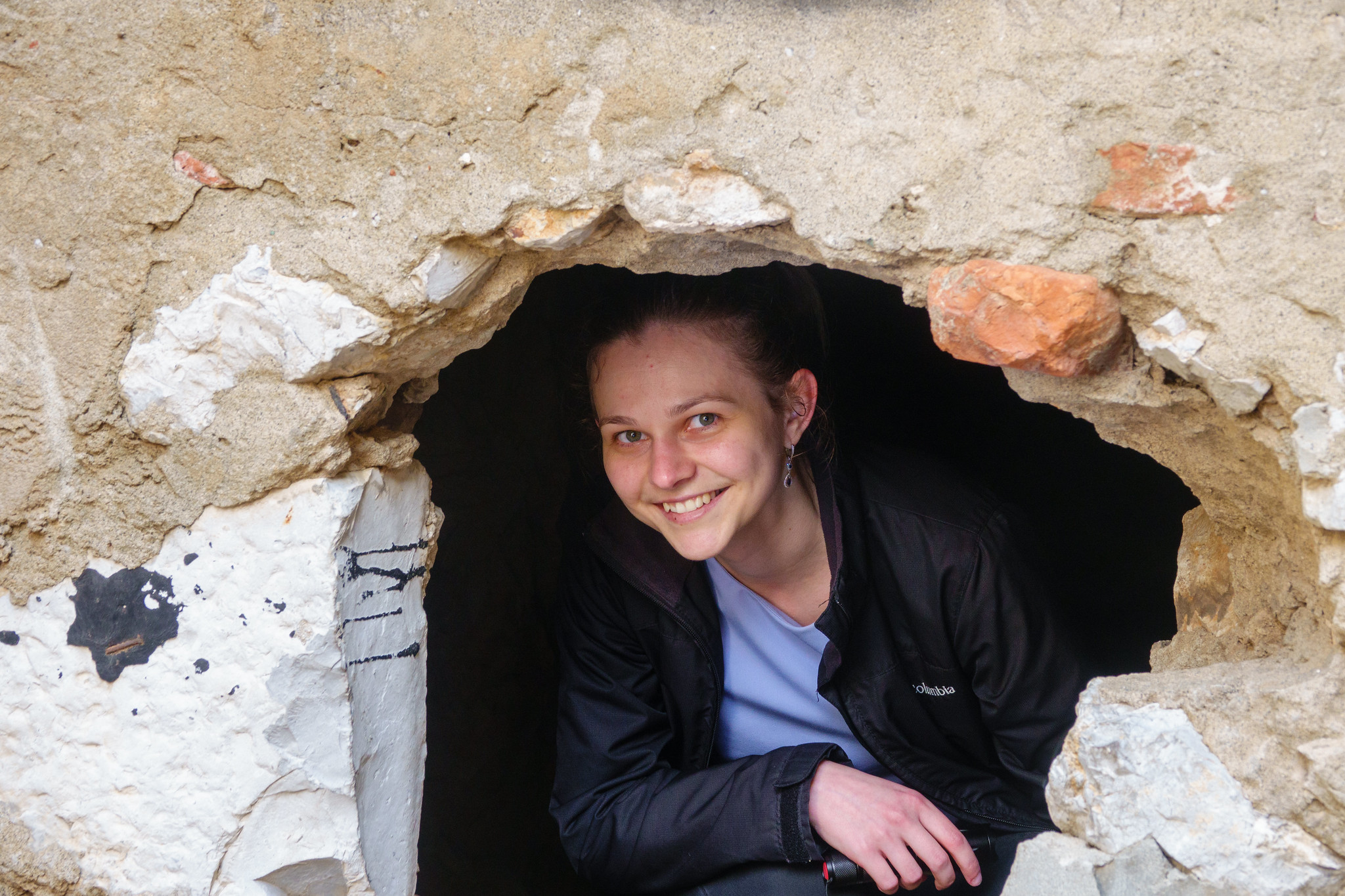 Some of our party proved to be more adventurous than others. Of course, all humans are curious to peek into spooky, dark places, as we’ve all been conditioned from children into the perverse pleasure of frightening ourselves. Most of us content ourselves with a quick look into a dark place and move on, but, when our guide wasn’t looking, Anna Muzychuk (above) decided to climb through one particularly small hole in the wall of a dark chamber into the absolute darkness beyond and disappeared from sight completely. A small group of us were left dumbfounded - would we ever see Anna again? I half-expected to hear an awful scream from within, denoting either a prank on Anna’s part or else a genuine disaster requiring a call to emergency services. 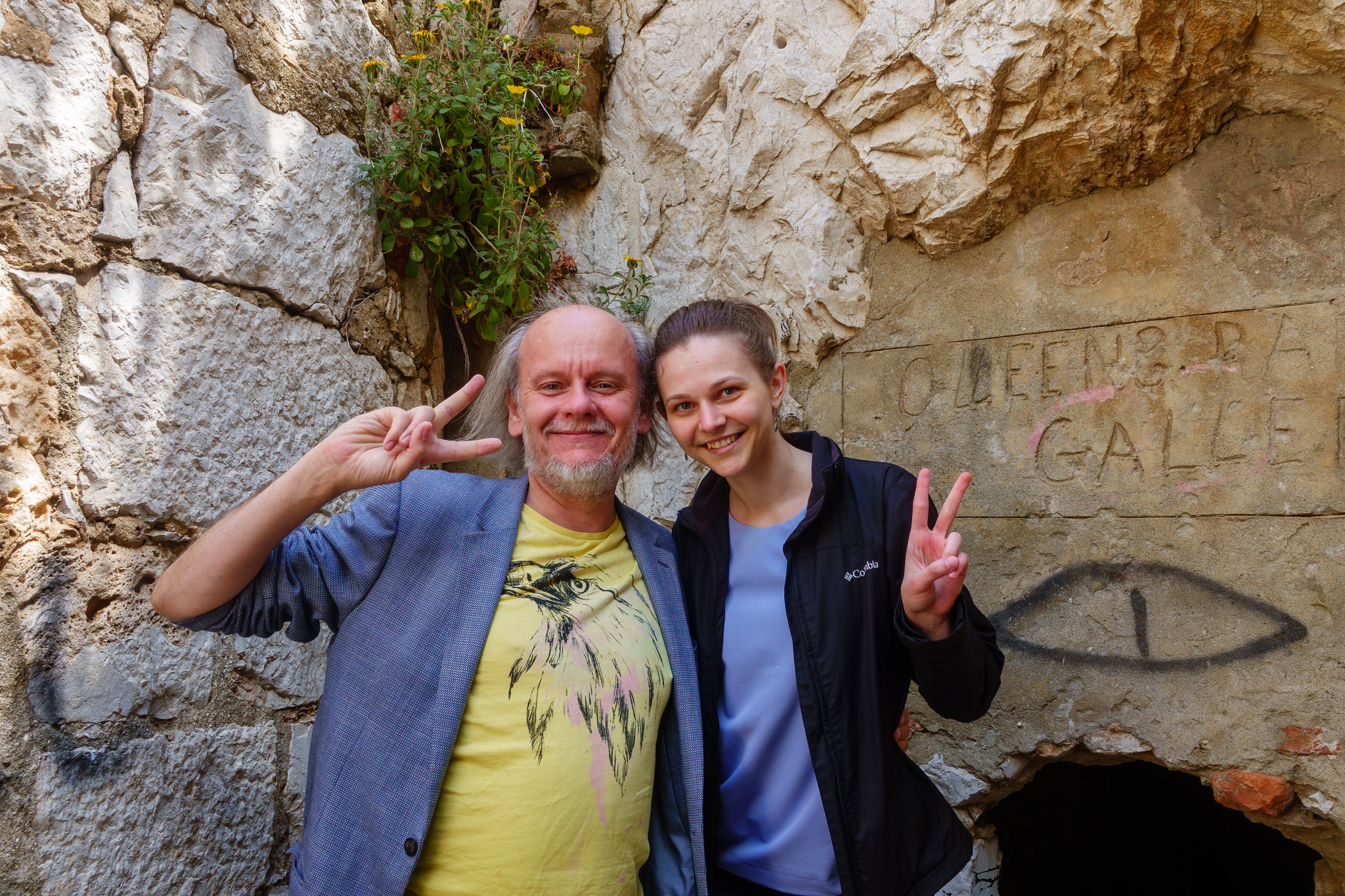 Tournament organiser Stuart Conquest, equally mischievously, decided to follow Anna into the abyss. I was amazed that such a tall man was even able to get through the aperture, but he managed it. OK, so now we were short of one player and one tournament organiser. But perhaps I worry too much. A couple of minutes later, two pinpoints of light were visible through the blackness and a few moments later our two heroes emerged back into the daylight, none the worse for their adventure. 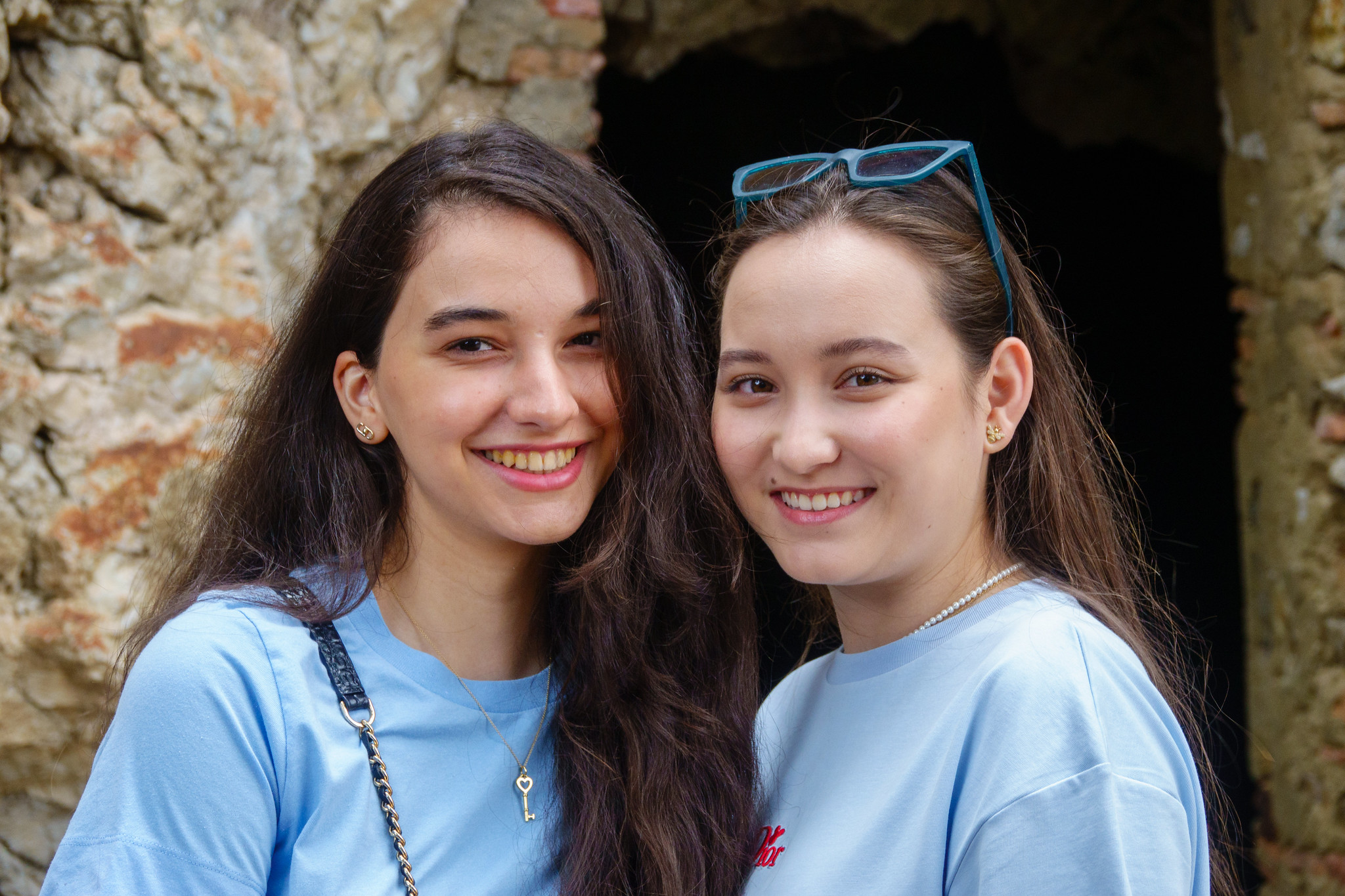 The last part of the tour saw us climb to a higher level on the upper rock where we could enjoy views across Gibraltar, the airstrip and the Spanish border beyond. It was gloriously sunny, and we took lots of photos to send home to our loved ones. At one o’clock, after thanking our splendid guide Carl Viagas for giving us such a detailed description of Gibraltar’s defences through the ages, we got back on the coach and travelled to our next engagement, which was lunch with His Worship the Mayor of Gibraltar, John Gonçalves. I’ve made that sound more grand than I should as it was an informal meal at a pleasant restaurant and John proved a down-to-earth, humorous and relaxed host. His Worship knows a bit about sport as he’s been involved in working for the International Basketball Federation. He told us it was his last mayoral duty of his two-year term. I think we all enjoyed the meal, perhaps all the more so for knowing that, afterwards, none of us were going to be expected to play top-level chess or else work to support top-level chess or broadcast it to the world. As well as the mayor, it was also a chance to say farewell to our genial commentator Nigel Short whose six-round stint came to an end yesterday and former world champion Veselin Topalov is on his way to Gibraltar to take over the chair next to Fiona. 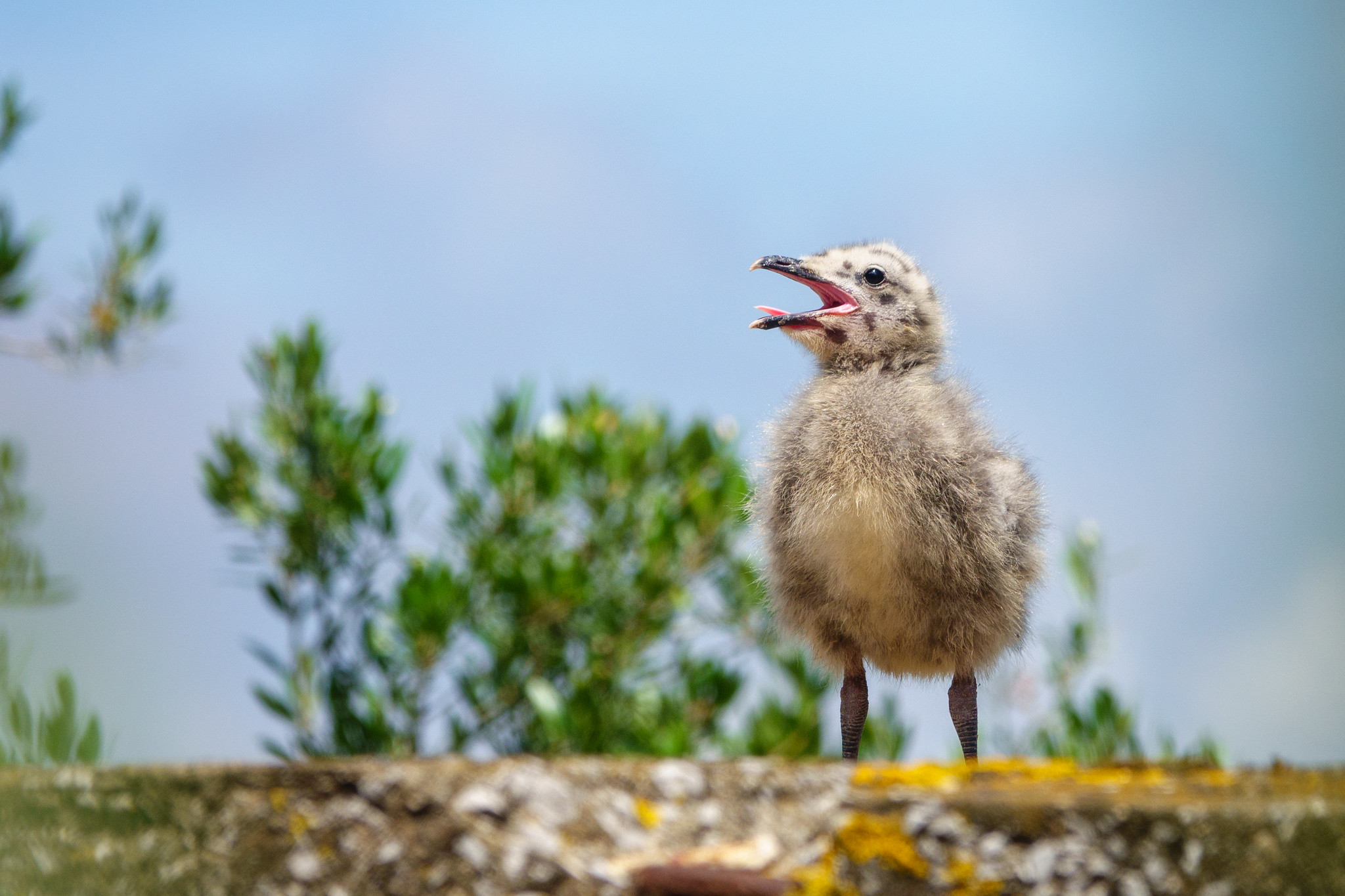 After lunch we all went our separate ways to enjoy the rest of a balmy day in Gibraltar and recharge our batteries (literally, in the case of the photographers amongst us). We’ll be back with you tomorrow at 15.00 CET for round seven of this most exciting tournament.