John Saunders reports: Over the past 18 years the Gibraltar International Chess Festival has proved a magnet for the world’s top players and amongst them have been a host of world chess champions, as players, commentators or simply visitors.

Outranking all the above, though she never won a world title, is Judit Polgar of Hungary, who competed in Gibraltar in 2012. Had she ever taken part in the women’s world championship and continued to play after 2014 it is highly likely that she would have held the title from the late 1980s until the present day. However, in her one appearance here, towards the end of her playing career, she was eclipsed by Hou Yifan of China who beat her in their individual game and went on to tie for first place in the open competition, only losing out to Nigel Short in a blitz tie-breaker.

As regards overall champions, no reigning world titlist has yet taken part in the Gibraltar Masters, though the festival has had several past and future world champions make the pilgrimage here. One is the legendary Boris Spassky who made private visits to the festival in 2009 and 2010. He came here just for fun, making a few opening moves for the cameras and spending time chatting with players in the hotel’s refreshment areas.

I had my own close encounter with Spassky in 2010 which I reproduce, lightly edited, from the report written then. ‘I noticed Spassky sitting in the bar. At the time I was having difficulty finding somewhere to sit and enjoy my lunch and was quite pleased to see him get up and depart, giving me an ideal place to sit. About 20 minutes later a slightly perplexed Spassky reappeared. To my surprise, he came up to me and asked “have you seen my glasses? I was sitting here before.” I leapt into action. Lifting the cushion on the chair, I caught sight of the spectacles on the floor below. I picked them up and handed them to him. Spassky’s reaction was as if I had just given him a cast-iron refutation of the Benoni. Lifting his arms to the skies for added effect, he exclaimed: “This is a miracle! How did you do it?” It was extremely pleasurable to have been of service to one of the greatest players who has ever lived. My life is now complete and my epitaph will surely read “here lies the man who once helped Boris Spassky find his specs”.’ 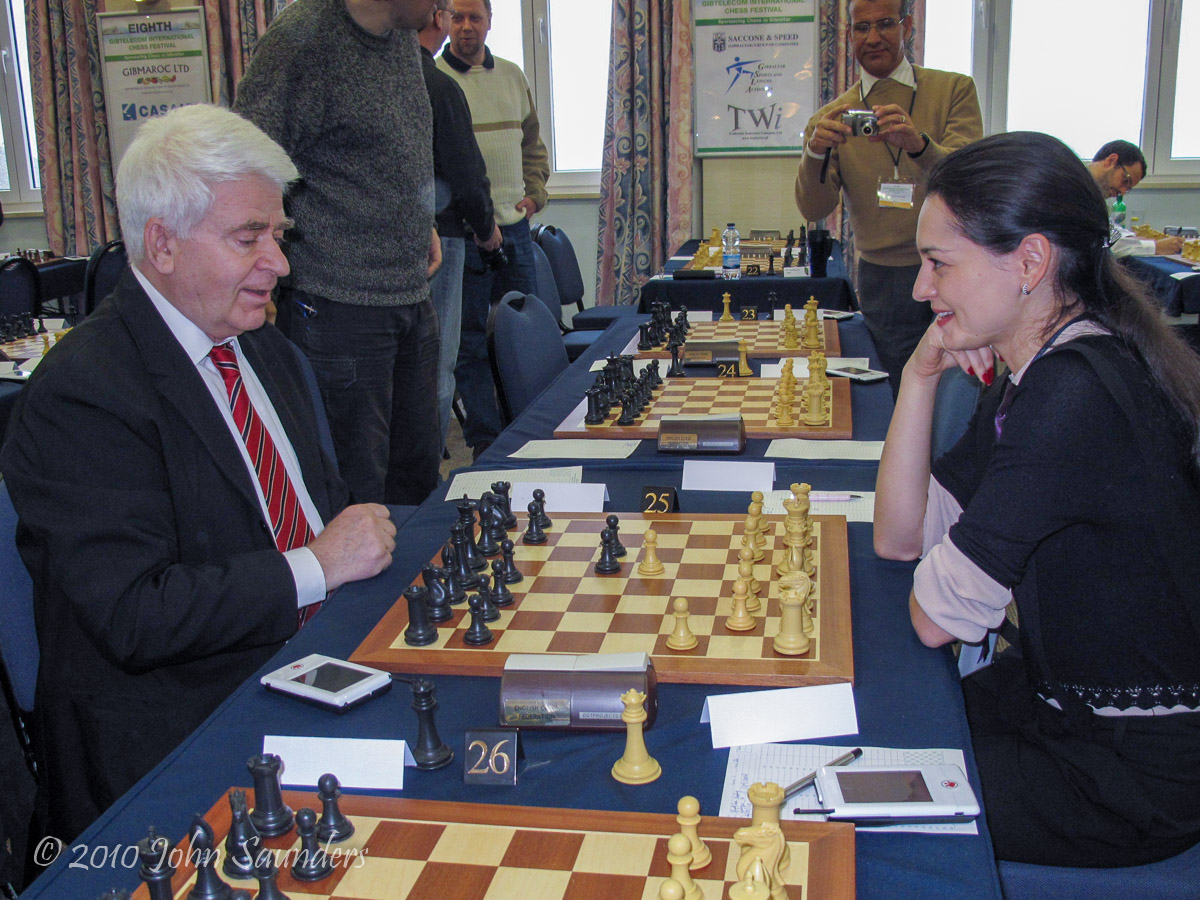 It hardly needs saying that Bobby Fischer never put in an appearance in Gibraltar though his death in 2008 coincided with the sixth round of the 6th Gibraltar Masters and a minute’s silence was observed in his honour on the following day. His successor, Anatoly Karpov, graced us with his presence in 2020 when he gave a simultaneous display to open the festival and was interviewed by Tania Sachdev.

Evidently beguiled by the relaxed, chess-friendly atmosphere in Gibraltar and the expert questioning of the festival commentator, the 12th world chess champion revealed some secrets about his career and expressed some strong views about the format of modern chess in this unmissable 20-minute interview. 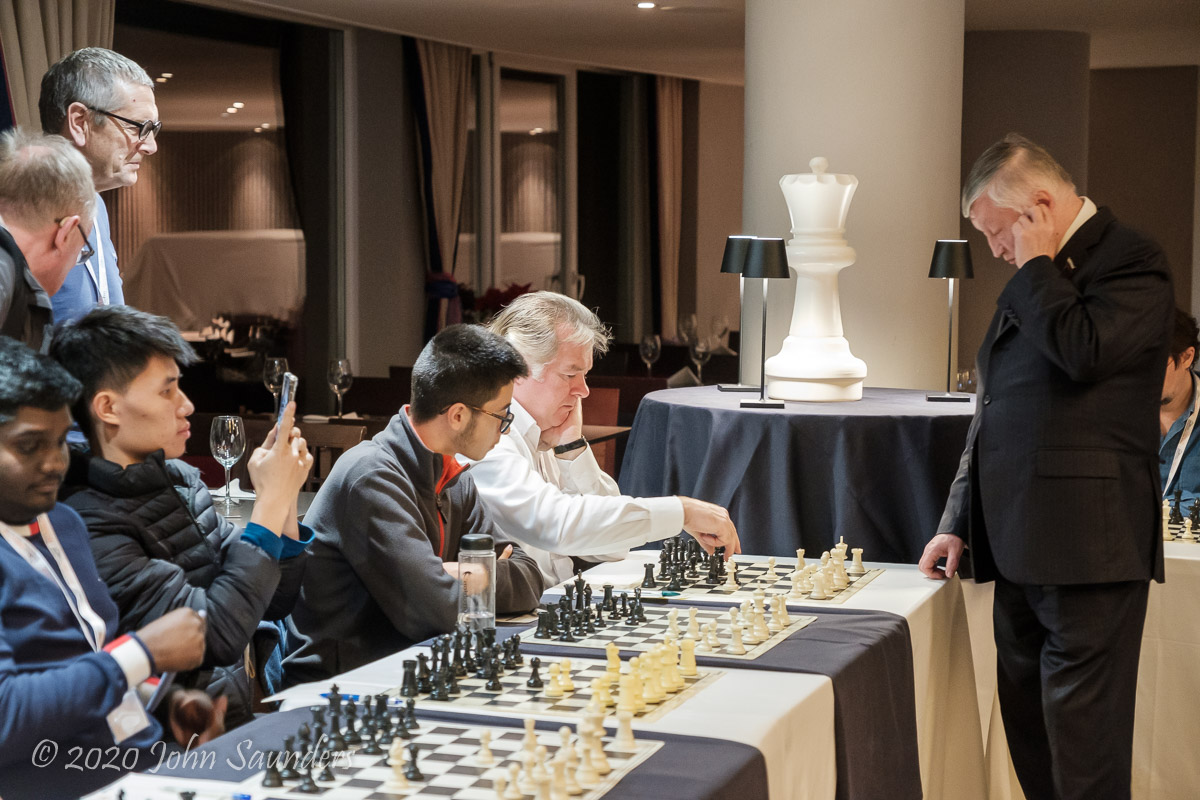 Anatoly Karpov giving a simul in Gibraltar in 2020

Garry Kasparov brought the curtain down on his playing career before #GibChess had fully developed into the world’s leading open tournament, but he still keeps a close eye on play in the Gibraltar Masters and occasionally comments. An example was in 2017 when his former world championship challenger Nigel Short defeated a 2800+ rated opponent, Fabiano Caruana, for the first time since scoring a lone win against Kasparov himself in their 1993 match. Kasparov commented laconically: “A shame for Caruana, but I have to be happy for my fellow senior citizen Nigel Short!” Kasparov’s successor Vladimir Kramnik was due to come to Gibraltar to give a master class in 2021 but, as we all know, that eventuality fell victim to the pandemic.

Two world champions of the modern era have competed in the Gibraltar Masters. The first to do was Veselin Topalov, world champion from 2005 to 2006. The great Bulgarian player competed here in 2015, 2017 and 2020. He also returned as commentator for the 2021 FIDE Women’s Grand Prix tournament held in Gibraltar. In 2015 he started with 4½/5 before losing to the eventual tournament winner Hikaru Nakamura. He had to be content with a share of third place on that occasion. In 2017 he was in a strong position until losing to the Spanish GM David Anton Guijarro in the penultimate round and this time sharing fourth place. In 2020 he was just half a point off the winning score with 7½/10 but there were no fewer than seven players on 8. Once again he suffered a single loss, to the Indian prodigy Rameshbabu Praggnanandhaa. 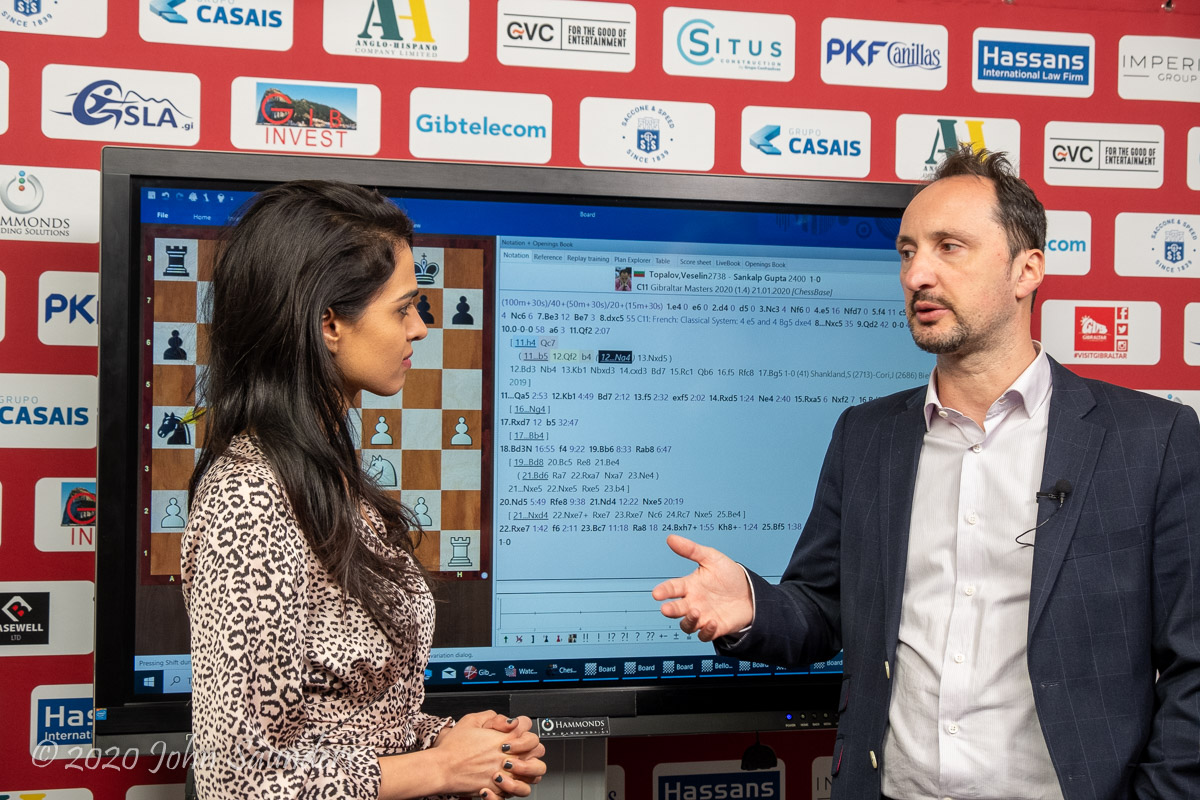 Following Topalov’s lead, the great Vishy Anand took part in the 2016 Gibraltar Masters. It’s fair to say that, by his stratospheric standards, his performance was very disappointing as he struggled to adjust to the demands of the unfamiliar Swiss system format after decades of elite round robin tournaments and matches. He suffered two defeats, to GMs Adrien Demuth and Benjamin Gledura, both rated well over 200 points below him, and finished on 6½/10. Despite this he conducted himself with the good grace and exceptional sportsmanship for which he is universally admired.

Finally, we come to the current world champion, Magnus Carlsen. He hasn’t played in the Gibraltar Masters, one factor being his commitment to the elite Tata Steel tournament with which the Gibraltar Festival unfortunately overlaps most years, but he has on at least one occasion made his way to the Rock after a Dutch tournament victory to celebrate with his sisters and his Norwegian friends who prefer to play their own January chess in glorious Gibraltar rather than wintry Wijk aan Zee. Let’s hope Magnus eventually sees the error of his ways and opts for the balmy Mediterranean over the chilly North Sea. Rather than chasing the chimaera of a 2900 rating, he could set himself the more worthwhile goal of becoming the first world champion to win the Gibraltar Masters. Who knows, he might even manage both...