#GibChess Battle of the Sexes Chess Tournament: Round 9

John Saunders reports: Round nine of the #GibChess Battle of Sexes, held at Gibraltar’s Garrison Library on Wednesday 2 February, saw a turnaround in fortunes as the women’s team ran out 6-4 winners on the day. This still leaves them three points behind the men’s team going into the final round (in which they will have the black pieces) requiring a 6½-3½ score to force a tie-break or a 7-3 score to win the match outright. The penultimate round was a tense affair with quite a few errors made under pressure from the match situation as well as time trouble, with the last game to finish resulting in a win for the men’s team when a draw (and match score of 6½-3½ had seemed the most likely outcome right to the end. Match score: Men 46½, Women 43½. Put simply, the men need a further 4 points from 10 in the last round to get over the line and claim the £75,000 first prize. 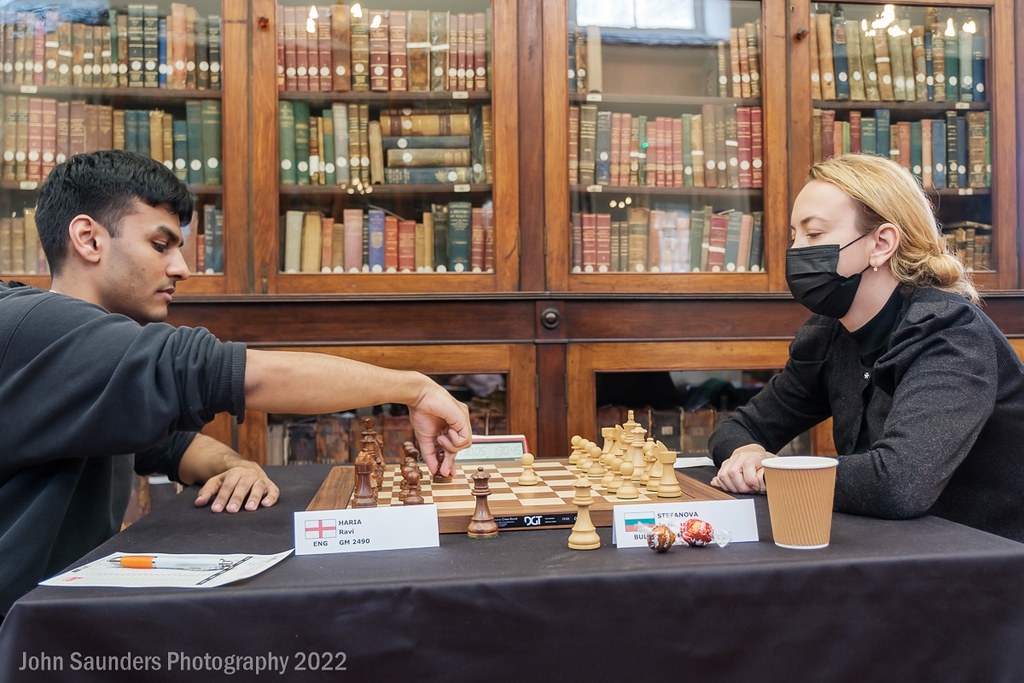 Two games ended quickly as draws, both in 15 moves. Marsel Efroimski versus Bobby Cheng was a perfunctory French Defence which ended in a repetition and took Marsel Efroimski to 4½/9 for Team Pia and Bobby Cheng to a still unbeaten 5/9. Mariya Muzchuk versus Bilel Bellahcene was marginally more interesting, in a Nimzowitsch-Rossolimo Sicilian, but ended with a draw offer. Mariya Muzchuk remains the women’s most prolific scorer with 6/9 while Bilel Bellahcene is the men’s team second equal best scorer with the same total. 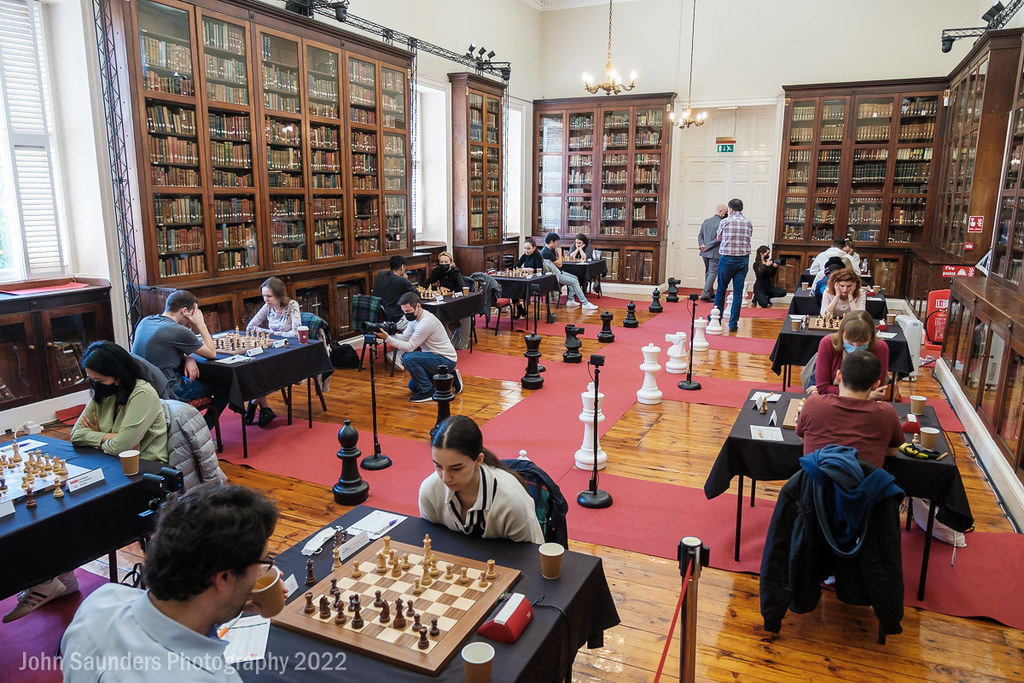 The remaining games were harder fought, and the excitement rose when it became apparent that some of the men had gone seriously off the rails and were losing. Perhaps the most drastic case was that of the previously unbeaten Ravi Haria who went horribly wrong against Antoaneta Stefanova in a Catalan opening, playing the terrible 12...Qa5 which gave up a piece which he perhaps expected to recover but discovered he could not do so. For the second day running the former women’s world champion found herself under some pressure having snatched material, but the way out of trouble was probably easier than the previous day and Ravi Haria’s attempts to confuse the issue came to nothing. Antoaneta thus proceeds to 2½/3 while Ravi Haria falls back to 5½/9. 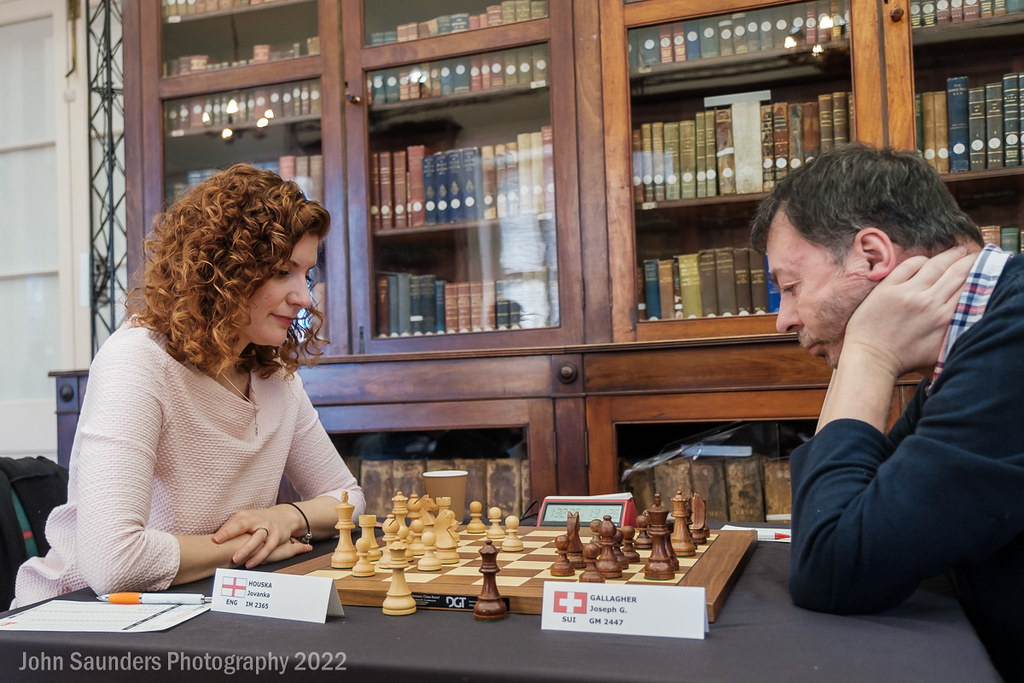 More or less at the same time the women’s lead stretched to two points on the day as Joe Gallagher came unstuck against Jovi Houska. From a King’s Indian with an early g3 Black opted for a dubious 15...Bf5 which gave up the two bishops for no apparent reason. White then offered a queen exchange which Black might have done better to decline as the exchange left White with a monster passed d-pawn. Things immediately got worse as Black allowed White’s dark-squared bishop to remain on the board where it was able to cover the passed pawn’s potential queening square. White helped herself to a couple of pawns as the rooks were tied down to stop the passed pawn queening and Black soon folded. This took Jovi’s individual score to 3½/9 and Joe Gallagher to 4/9.

Marie Sebag has had a very solid tournament and she proceeded to 5/9 with a solid draw in a Berlin Ruy Lopez in 44 moves against Husain Aziz. Black may have had a slight edge at various junctures but no clear path to progress could be discerned. Marie Sebag has 5/9 to Husain Aziz’s 3½/9. 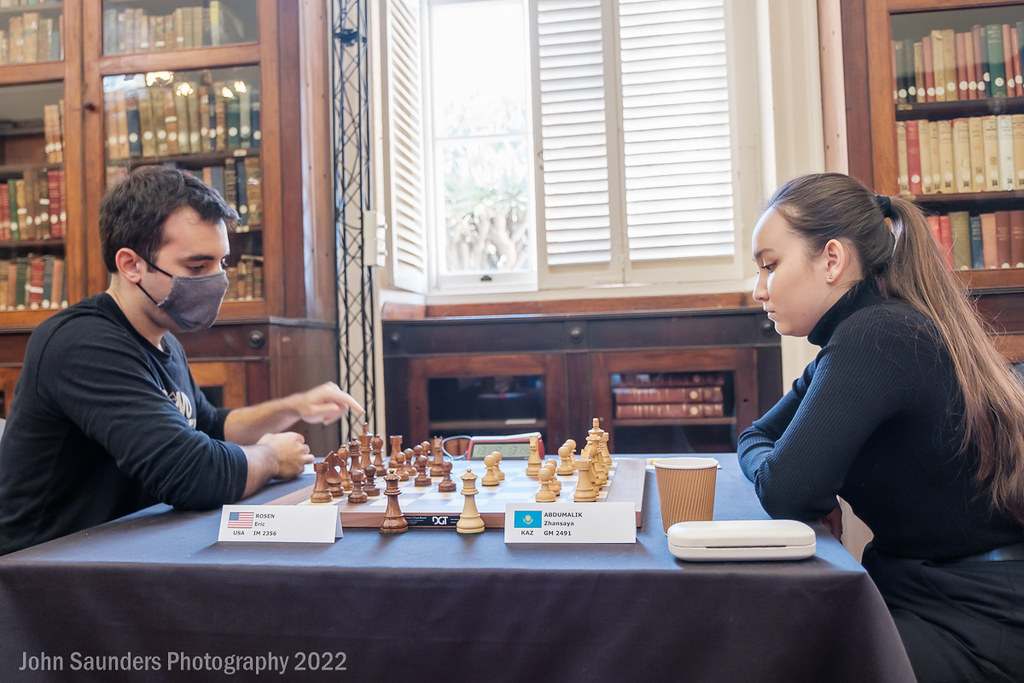 Analysis engines despaired of Sabino Brunello’s position against Gunay Mammadzara, but the genial Italian GM seemed relaxed about it after the game ended, opining that he isn’t worried by a position assessment deficit of -3.00 or thereabouts. White perhaps needed to find 29 Qb3 rather than 29 c5 to further her progress but some inferior moves squandered White’s advantage. Sabino Brunello now has 6/9 while Gunay Mammadzada has 3/9.

By now a real problem for the women’s team was Zhansaya Abdumalik’s bad position against Eric Rosen in a Yugoslav Attack, Sicilian Dragon. Then, suddenly, luck swung in favour of the women’s team. At move 35 Black appeared to be winning but in time trouble a trio of ever more horrid moves cost him the game as he went 35...Qxh4 (snatching a pawn) 36...f5 (exposing his king) and 37...Kf8?? (hanging a piece). The rest was quite easy for Zhansaya Abdumalik who proceeded to 5/9; Eric Rosen was left on 3½/9. That put the women’s team three points up on the day and started the dream of an even more substantial victory.

Balazs Csonka is having a fine tournament and he progressed to 6½/9 with a fine win against Irene Sukandar who now has 4/9. This also means the Hungarian IM needs half a point from his last round game to clinch a second GM norm. The opening was an Anti-Marshall line of the Ruy Lopez. It might be worth readers seeking out his comments in the post-game interview as he managed to cram quite a lot of useful points into a short slot. What truly cooked White’s goose was the invasion of the black king around the move 40 time control. Thereafter it always seemed probable that Black would prevail. 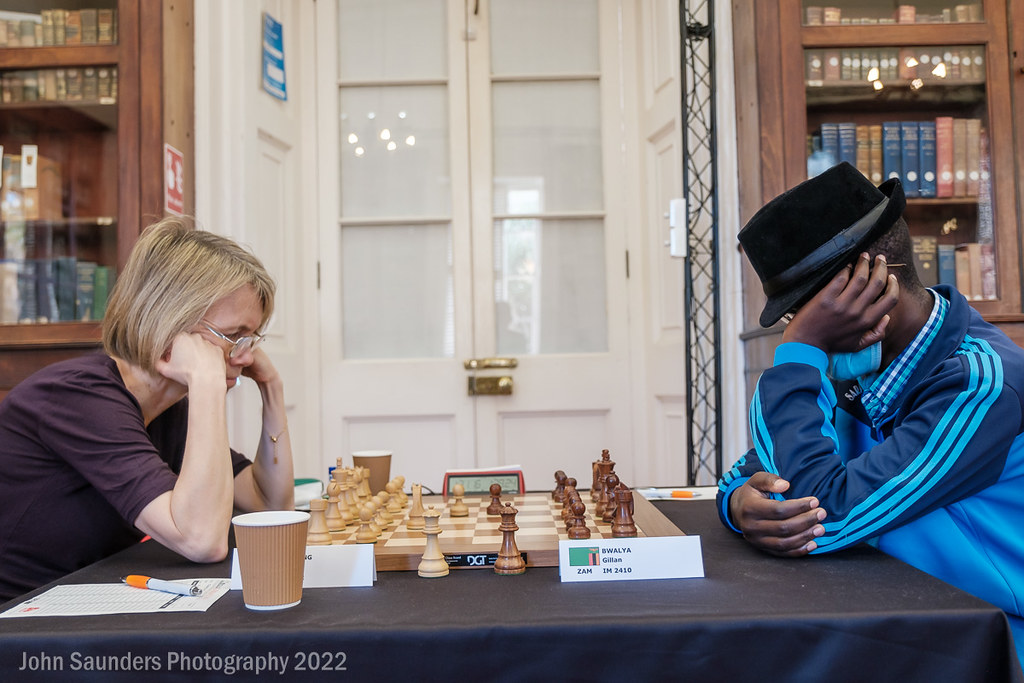 Gillian Bwalya showed quite a lot of the fight he had displayed in holding Marie Sebag to a draw on the previous day against Pia Cramling, but eventually the defence became more problematic and he moved his king to a losing square on move 55 when 55...Kc6 might have held. Pia Cramling advanced to 4/9 while Gillian Bwalya is on 1/8. 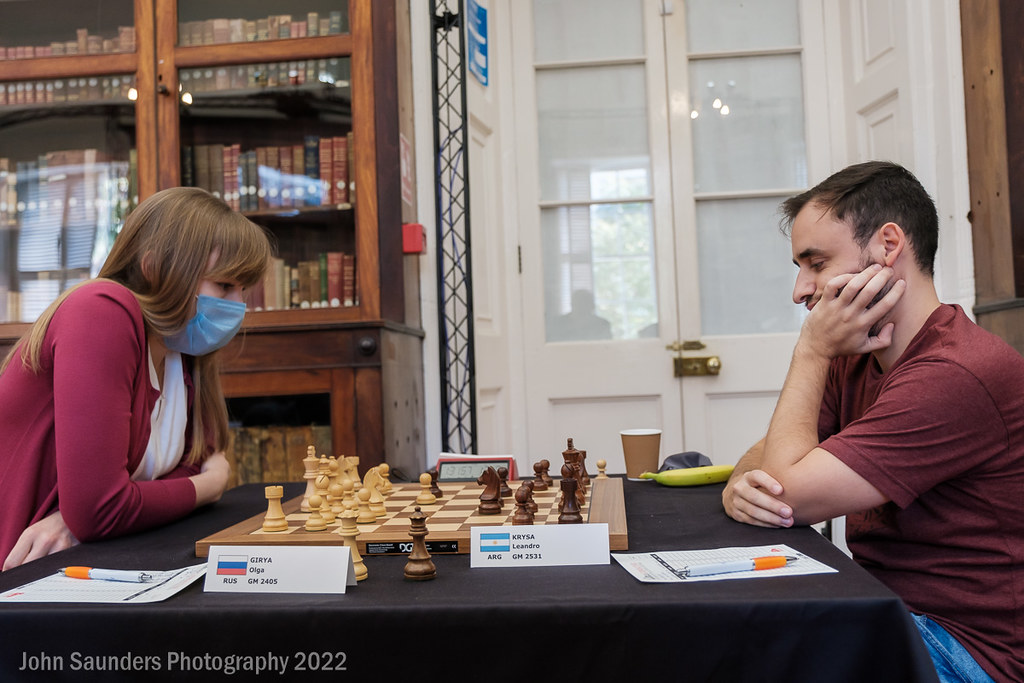 Finally, the game between Olga Girya and Leandro Kryas: this was a hard fight which the position had consisted of two minor pieces each and Black having a pawn advantage from move 27 onwards for around 50 moves. It had never looked too likely that the extra pawn would have led to a win for Black until White blundered on move 77, allowing a combination winning a second pawn for Black. The resultant opposite bishop ending was won for him, but only just. 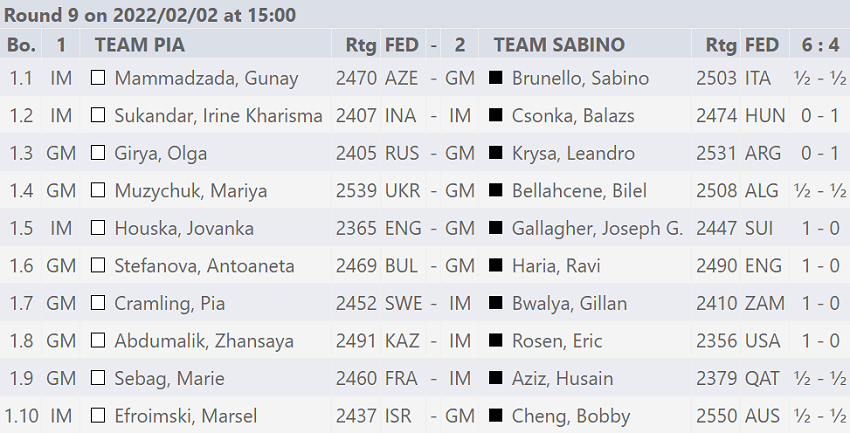 A nail-biting finish to an exciting round and it was jubilant Leandro Kryas who came to the studio to record the post-game interview. Leandro Kryas is now on 5/9 while Olga Girya has 4½/9. Though they had lost 4-6, there was a mood of relief in Team Sabino that they had done enough to put a last-round fightback just out of reach for Team Pia armed with the black pieces. But we shall see...

The tenth and last round is on Thursday 3 February starting at the earlier time of 11.00 CET with possible tie-breaks to follow.

Photos of Round 9 may be found on Flickr via the web link - https://flic.kr/s/aHBqjzATEv