#GibChess Battle of the Sexes Chess Tournament: Round 8

John Saunders reports: Round eight of the #GibChess Battle of Sexes, held at Gibraltar’s Garrison Library on Tuesday 1 February, resulted in a 5½-4½ victory for Team Sabino with the White pieces, increasing their overall score to 42½-37½ – a lead of five points for the men’s team with two rounds to go. Battle is now well and truly joined, with various chances coming and going, but the men’s team lead is starting to look hard to overturn. The ray of hope for the women’s team was a change of momentum during the round as what seemed likely to be a heavy defeat was kept within bounds via some remarkable saves and turnarounds towards the end of the round. They now need to repeat their big wins in rounds one and two victories if they are to snatch victory at the death. 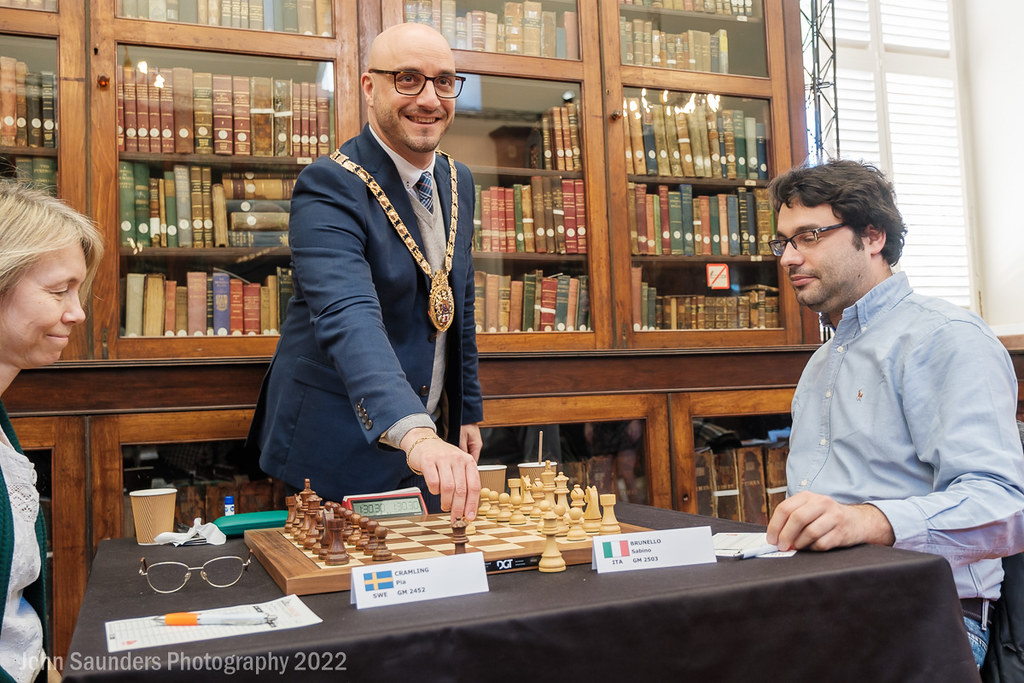 5½ out of 8 is now the leading individual score on either team, achieved by Mariya Muzychuk on Team Pia and by no fewer than four members of Team Sabino, comprising the captain himself, Balazs Csonka, Bilel Bellahcene and Ravi Haria, the latter two with streaks of three wins in a row.

Hungarian IM Balazs Csonka has been the star performer for the men’s team so far and might have reached 6/8 but for missing a simple finish after a dazzling series of moves to reach a won position against Zhansaya Abdumalik, who now has 4/8. The game began with a Symmetrical English opening and the fireworks started with a thematic Sicilian sacrifice of a knight on d5 to open a path to the black king. The follow-up was far from routine, however, with a remarkable sequence of b6-b7 and Rd1xd6 which had the feel of a boxer’s combination punch. Black had to surrender her queen for rook and minor piece, but the attack continued. Then, just as most of the hard work seemed to have been done. White missed the simple 36 Bc8, picking off another important central pawn, and instead allowed Black a chance to consolidate. 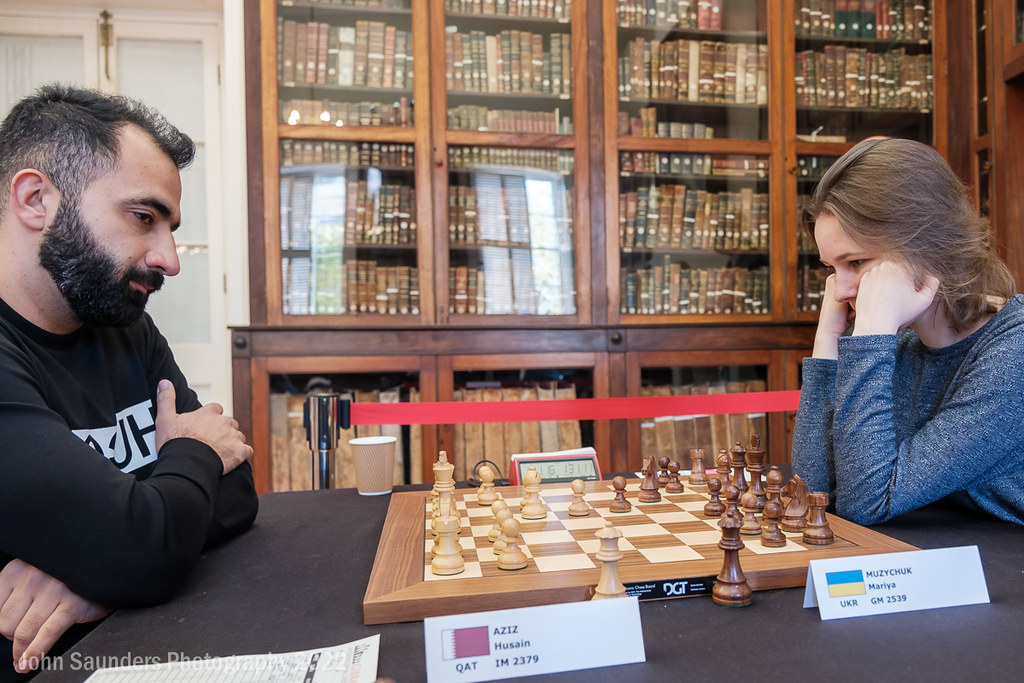 Mariya Muzychuk now has a point more than her teammates with 5½/8, scoring a confident and smooth victory over Husain Aziz who now has 3 from 8. The game started with a Caro-Kann, Exchange variation, with Black boldly advancing the g-pawn in front of her castled king. The first move which looked fishy was perhaps 19 b3 and before long some pieces were exchanged and a weak c-pawn had been lost. However, when it came down to a rook and pawns ending, it began to look distinctly drawn. But White played inaccurately after the time control and his errors were expertly punished by Black.

The two team captains faced off in this round. Sabino Brunello moved to 5½/8 by inflicting a third successive defeat on Pia Cramling who is on 3/8. The game came down to a tricky minor piece endgame where White started with only a slight edge but it gradually became harder to defend. The decisive moment was when Black opted for 54...g6 where 54...g5 gave good holding chances. 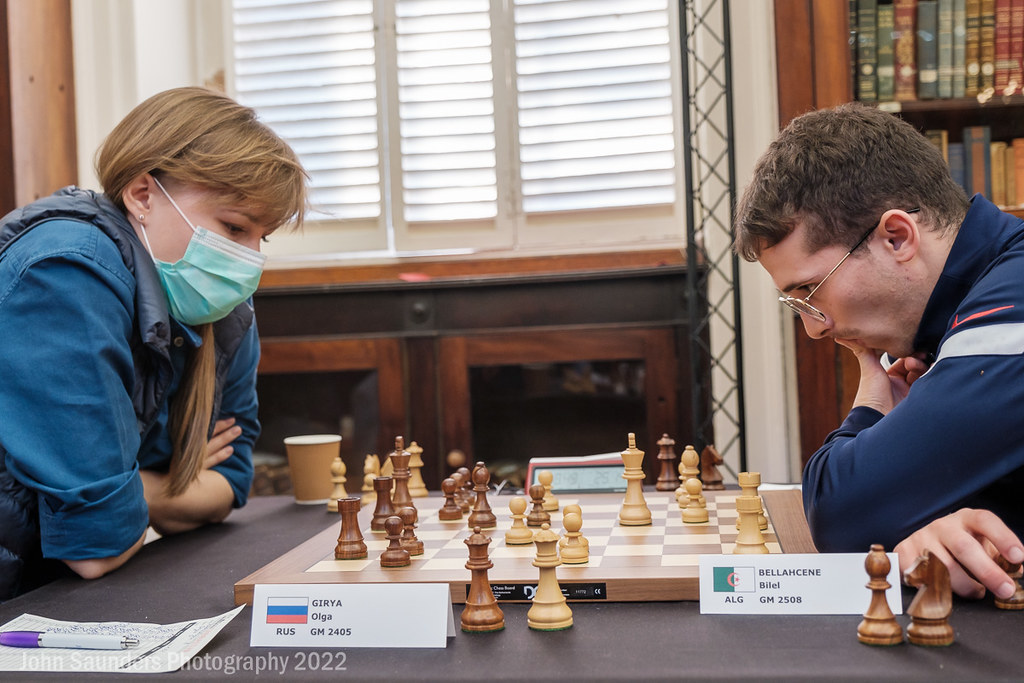 Readers may remember Bilel Bellahcene’s cheeky but successful g4 move in round four against Irene Sukandar’s Nimzo-Indian, mirroring something Shakhriyar Mamedyarov did at the Tata Steel tournament, and the talented Algerian player tried g4 again in a Queen’s Gambit Declined opening against Olga Girya. This was not an innovation as the move has been tried here a few times before. Bilel went on to win an important game for his side, moving to 5½/8 and reducing Olga Girya to 4½/8. I’m wondering if we can start talking about an early g4 as the ‘G for Gibraltar move’ as it’s high time that Gibraltar featured in the rich tapestry of chess opening names. If readers have better suggestions, please suggest them on Twitter using our standard #GibChess hashtag so we can find them. Back to the game and Bilel was of the opinion that Olga should have played either h6 or Bxc5 on move 6 as he felt White was better after castling. As played, the queens came off early and Black was soon subjected to a strong positional bind which she was unable to shake off.

Ravi Haria started the event slowly with five straight draws and had been regretting a number of missed chances, but he now has his scoring boots on and completed a hattrick of wins by defeating Jovi Houska to move to 5½/8, leaving his opponent on 2½/8. In a sideline of the Advance Caro-Kann, White didn’t get anything special from the opening or early middlegame. 26...g6 looks like a positional concession but Black still held firm until some time after the time control when Black suffered a hallucination and blundered with 49...c4+ thinking that she would have the move 51...Rb3 a few moves later when in fact the defence is simply refuted with 52 Rxb3 cxb3 53 Kd3 and White stops Black’s passed pawn. Instead, engines give the position as equal though in real life it might still have been hard to mount a defence in the long term with not much time on the clock. 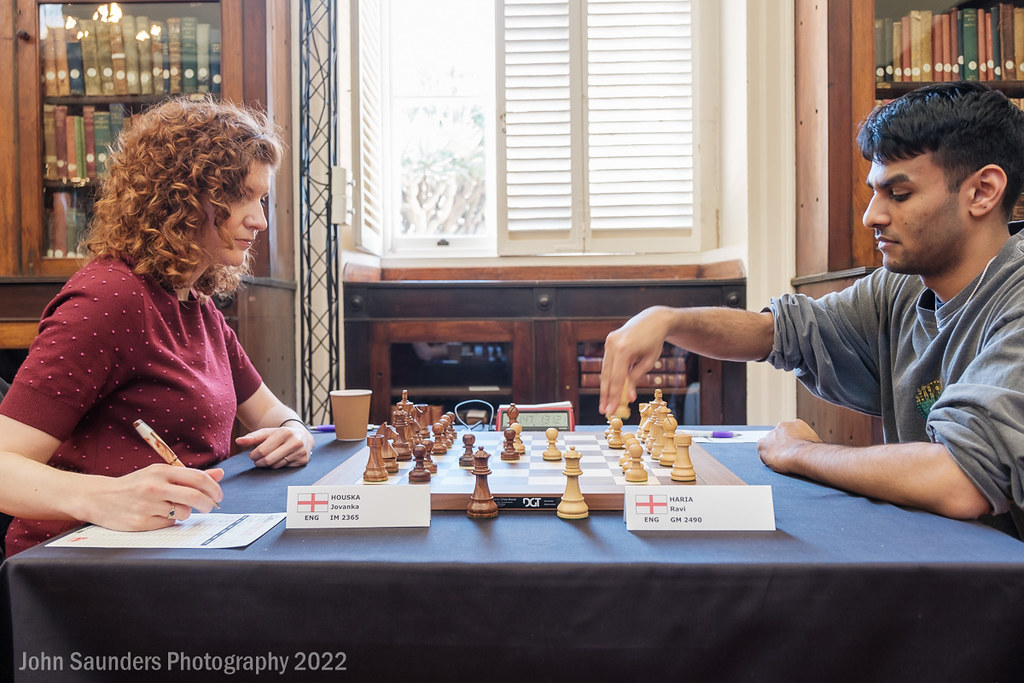 Marie Sebag now has 4½/8 after a solid draw with Zambian IM Gillian Bwalya who is now on 1/8. Gillian has had a very tough time in the event so far, but he did the sensible thing of playing ultra-cautious chess to stop the rot. Hence an Exchange Slav, which is very hard to break down for a player of the black pieces who wants to try and win. This was not an exciting game, but I recommend readers to watch Gillian’s logical explanation of how he set about digging in and securing a draw against a grandmaster in the post-game interview. 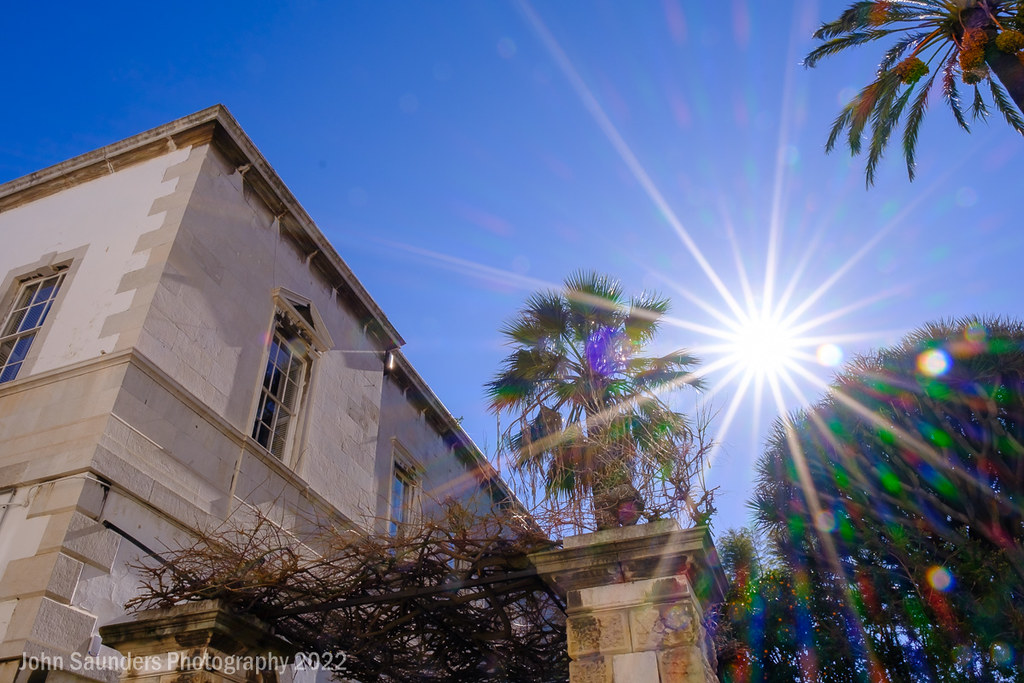 Bobby Cheng advanced to 4½/8 after drawing with Irene Sukandar, who is now on 4/8. The opening was a Catalan with Black opting for a sideline where the queen goes to a6. White gave up a pawn to gain space and cramp the black position. Soon White gave up a second pawn and play became a little wild as the black queen sought a safe haven. Engines favoured Black during this sequence but it was too complicated to expect a human to find the most precise moves. Eventually Black was forced to give up her queen but at the very reasonable price of rook, bishop and three pawns. After a draw was agreed the players were eager to consult an engine to see what the verdict was. Stockfish flagged it as about +1.00 in favour of Black but in reality it wasn’t obvious how either side would go about trying to win.

Joe Gallagher and Marsel Efroimski both have 4/8 after drawing their eighth-round game. The opening was a Bb5 Sicilian, more precisely the Canal-Sokolsky Attack in which White develops the dark-squared bishop on b2. Black departed from known opening territory with 11...Qa5. White opted to exchange in the centre with 17 fxe5 where 17 f5 looked more aggressive, fixing the d6-pawn weakness. As played, with much material exchanged, Black’s pawns seemed slightly more vulnerable than White’s, but Black played very accurately to steer her way to a draw. 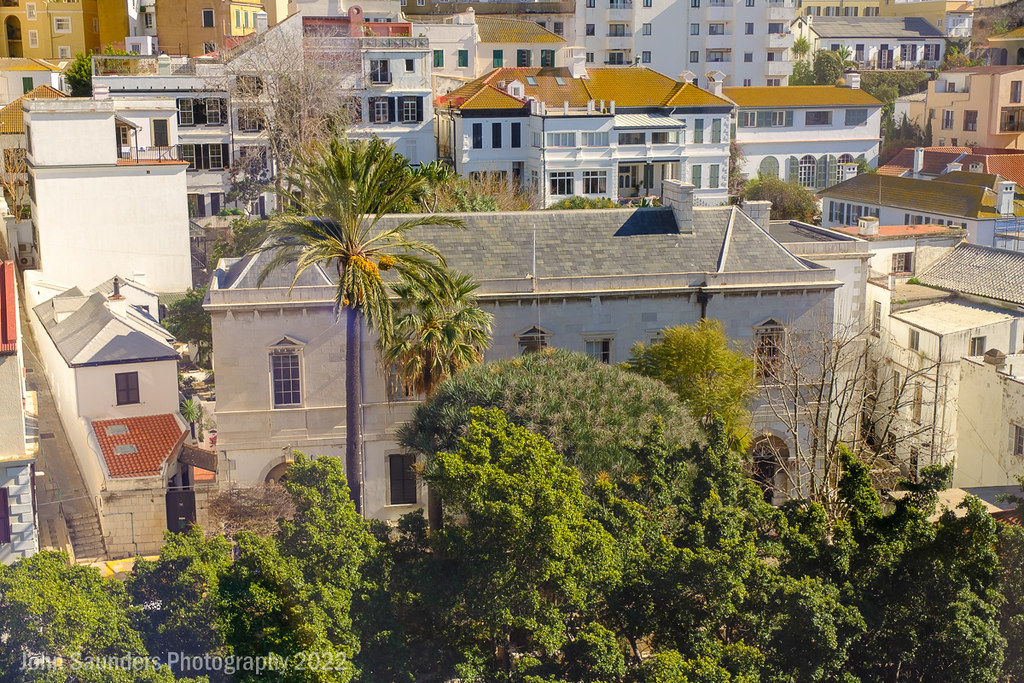 Eric Rosen and Gunay Mammadzada had a game which swung back and forth a number of times before ending in a draw. White opted for the solid London System, much favoured by beginners and sometimes cruelly dubbed ‘old men’s chess’ in UK chess circles, but it can be a potent weapon against the unwary. In the game White allowed Black an exchange on e5 and followed up with an incursion on the light squares which seemed to favour her quite considerably. Black might have taken a pawn on f2 but she hesitated and later blundered with 35...Rf5 which soon cost her a pawn. White steered the game into a standard two passed pawns versus one passed pawn scenario which is usually a win but, on the very edge of converting, played a careless move allowing the passed pawns to be separated and one of them lost. Eric Rosen is now 3½/8 while Gunay Mammadzada has at least broken a streak of three defeats to move to 2½/8 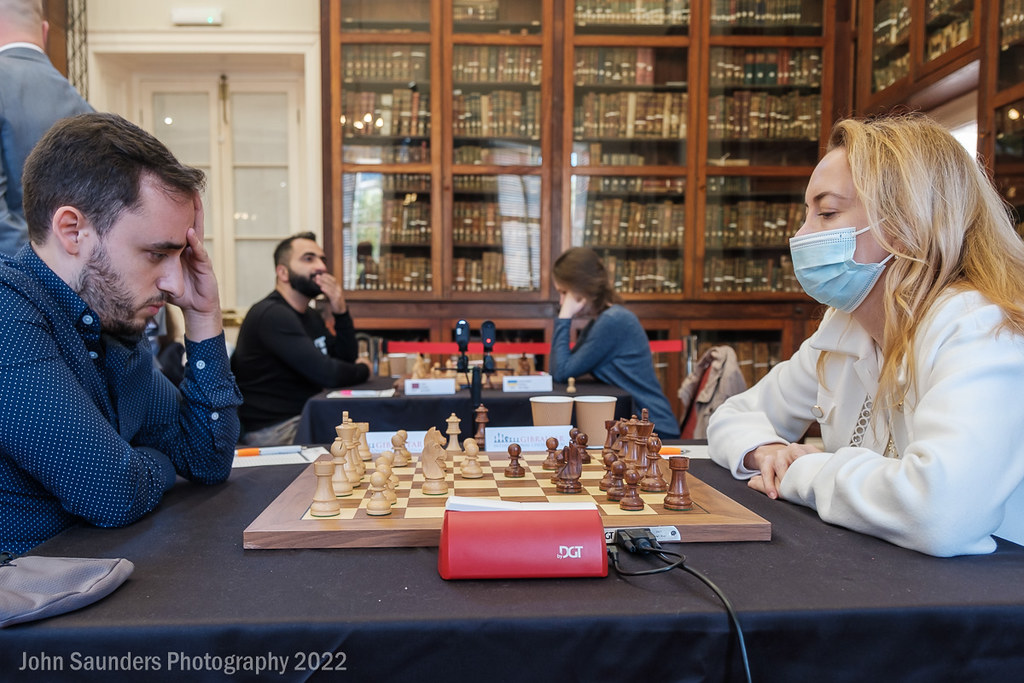 Finally we come to one of the most remarkable games of the day with the return of ex-world champion Antoaneta Stefanova to the fray after six days confined to her hotel room having tested positive for Covid. She has since tested negative twice and is thus allowed out of self-isolation. In the post-game interview she explained that she filled her time profitably, carrying on with her Master’s degree studies and following the match online. In round eight she faced the unbeaten Argentinian GM Leandro Krysa with Black. Perhaps hoping to exploit his opponent’s rustiness, White launched a fierce attack in a Semi-Slav opening, sacrificing two pawns for a big lead in development. Analysis engines found a crushing idea for White (16 Qd2 Qb6 17 Na4!! bxa4 18 Rb1 Qa7 19 Bc7 winning, or if 16...Qe7 17 Qe3!, etc) but these were beyond the scope of a human brain. Even so, White found an imaginative attacking idea involving a knight sacrifice on b5 followed with a rook sacrifice, which might have frightened the life out of most players, but Black countered with the ultra-cool refutation 20...Be7! after which White’s attack had run its course. A few moves later, two pieces down, White found himself beating his head against a brick wall and had to resign. Leandro Krysa now has 4/8 while Antoaneta Stefanova has 1½/2. Today I’m nominating this and Mariya Muzychuk’s win as shared games of the day. Both of them managed to keep a cool head in a crisis, befitting their status as women’s world champions and keeping Tia Pia in with a chance of winning the match. 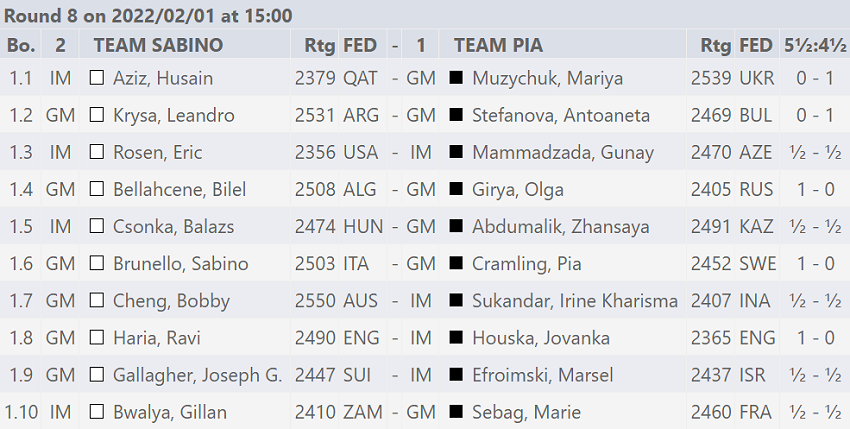 Round nine is on Wednesday 2 February at 15.00 CET. The tenth and last round is on Thursday 3 February starting at the earlier time of 11.00 CET with possible tie-breaks to follow.

Photos of Round 8 may be found on Flickr via the web link - https://flic.kr/s/aHBqjzAKtC