#GibChess Battle of the Sexes Chess Tournament: Round 7

John Saunders reports: Round seven of the #GibChess Battle of Sexes, held at Gibraltar’s Garrison Library on Monday 31 January, resulted in a 6-4 victory for Team Sabino with the black pieces, increasing their overall score to 37-33 – a lead of four points. But, once again, it could have been very different if Team Pia had taken all the chances offered in what was a particularly tense and hard-fought round. 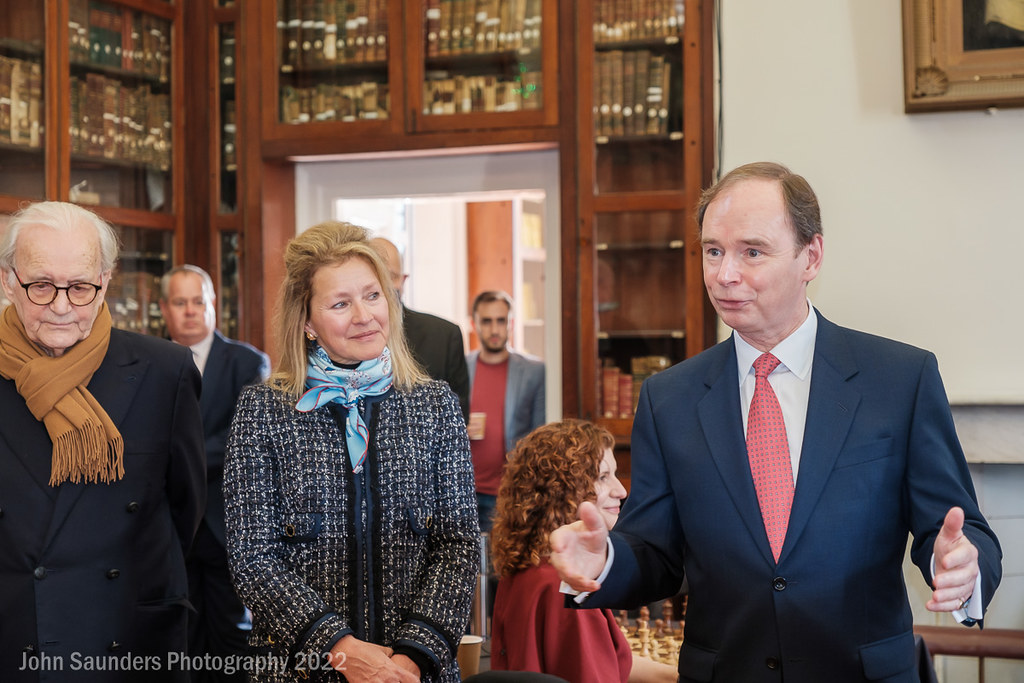 Sir David Steel, Governor of Gibraltar, took a keen interest in proceedings at his visit to the event

Before play started the event was honoured to be visited by the Governor of Gibraltar, His Excellency Sir David Steel, and Mrs Edwina Haynes, Honorary Consul of Georgia both who took a great interest in proceedings and spoke to players and officials before play got underway. 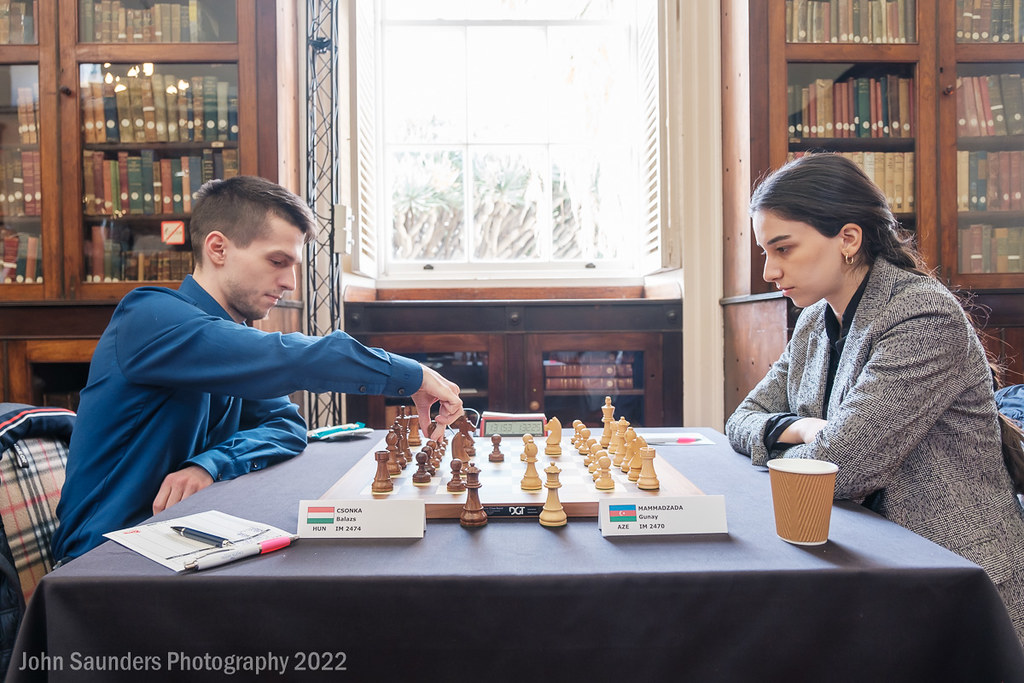 The highest scorer in the two teams is now Hungarian IM Balazs Csonka with 5/7. In the seventh round he played and defeated Gunay Mammadzada, for whom this was a third successive loss; she now stands on 2/7. The opening was a Ruy Lopez and was all theory until move 23 when White has tried the sacrifice Nxh7 in other games, but Gunay opted to retreat her knight. She soon lost the initiative and Black assumed control of the position, particularly on the dark squares where White was in no position to challenge. I do recommend readers watch the interview on YouTube in which my effervescent young interlocutor rattled out a phenomenal number of variations, let us know that he had been keeping some elements of this line secret for just such an occasion and then cheekily asked if I was going to award it my game of the day prize (worth the eye-watering sum of £0). Well... maybe... but let’s consider some of the other games first, shall we? But definitely an excellent game and a valuable contribution to Team Sabino’s horde of points. Commiserations to Gunay Mammadzada who met an opponent who is on a roll while she is going through a rough patch. 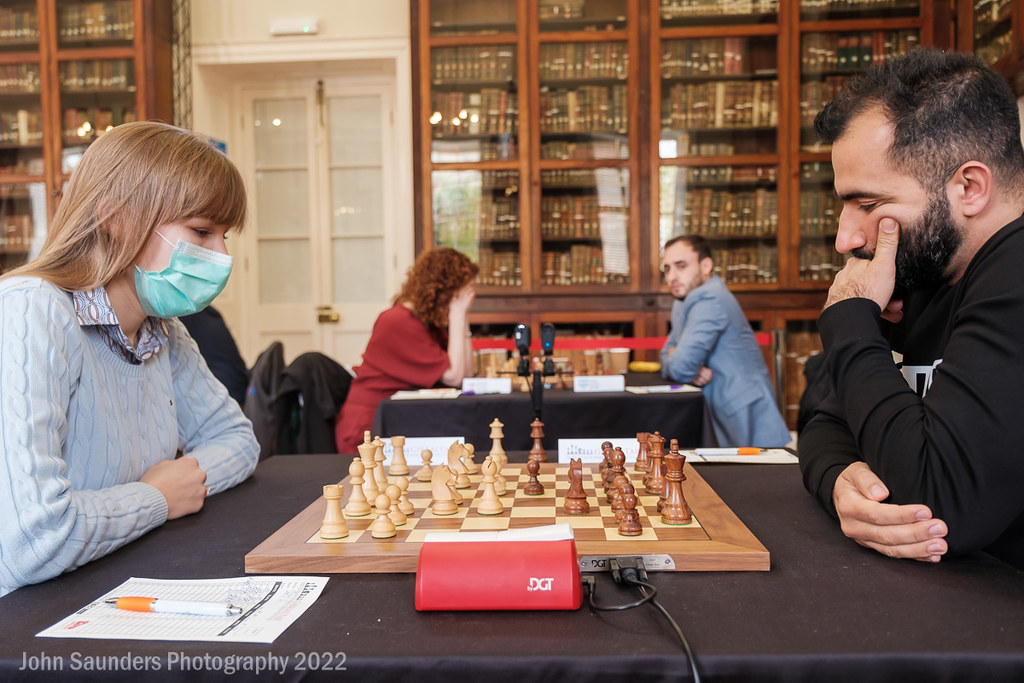 Husain Aziz diced with death once too often against Olga Girya

No fewer than five players currently have a respectable 4½/7. First to reach that score was Olga Girya, who beat Husain Aziz and pegged him back on 3/7. The previous day Husain had scored a miracle win after being in a lost position but there was no let-off today from the Russian grandmaster. Looking at the game with her, she felt that the initial mistake was 14...Bb7, giving up the two bishops. White played the clever move 19 Qe4 when Black thought he had time for the capture on g5 but then discovered that a long, forced sequence ended, not with an extra pawn, but a devastating temporary piece sacrifice for his opponent which exposed his king to a withering attack and netted pawns into the bargain.

Also on 4½/7 for Team Pia is Mariya Muzychuk who was soon on the attack against Gillian Bwalya who played an inferior line against the Keres Attack of the Scheveningen Sicilian and was always struggling to stay afloat. On move 18 Black left the a6 pawn to be taken and had nothing to show for it. Gillian Bwalya now languishes on ½/6 but there are still three rounds for him to make a recovery. 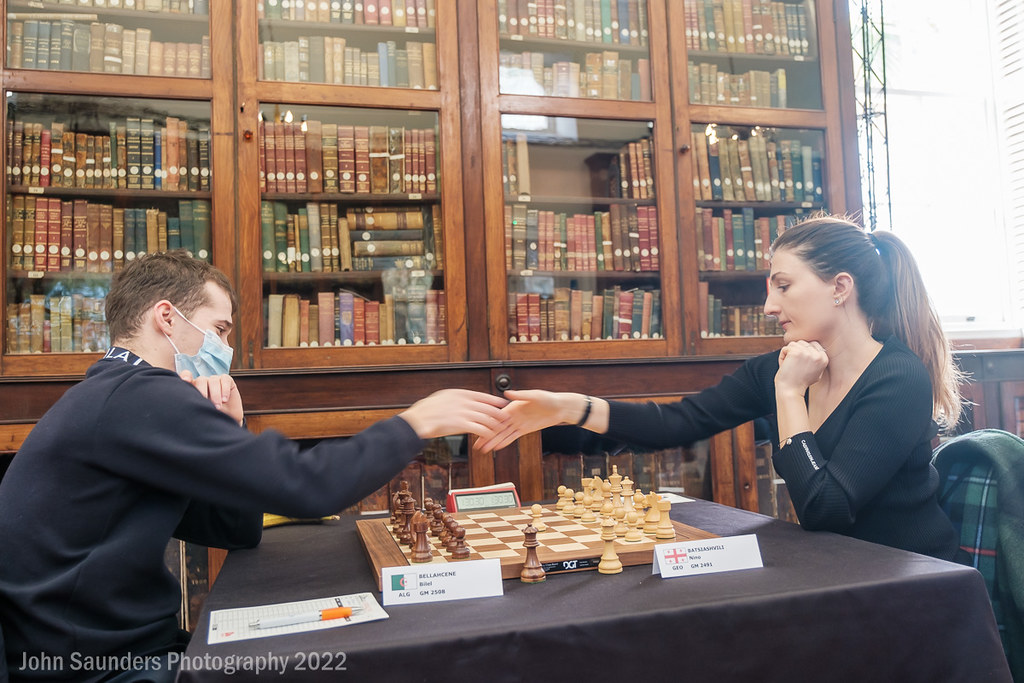 Start of game handshake between Nino Batsiashvili and Bilel Bellahcene

Gaining two early wins from Olga Girya and Mariya Muzychuk and a +2 lead was as good as it got for Team Pia, but it really could have been so much better. Nino Batsiashvili had the honour of having the Honorary Consul of Georgia in Gibraltar, Mrs Edwina Haynes make the first move for her, but sadly it did not bring her luck against the Algerian IM Bilel Bellahcene. White’s position looked promising at one stage before spoiling it somewhat. Even then it might have been saveable but for a desperately poor move, 42 Rf4, when 42 Rc1 was both more intuitive and better. Nino Batsiashvili now has 1½/6 while Bilel Bellahcene has advanced to 4½/7, with his points all coming from the last five rounds. 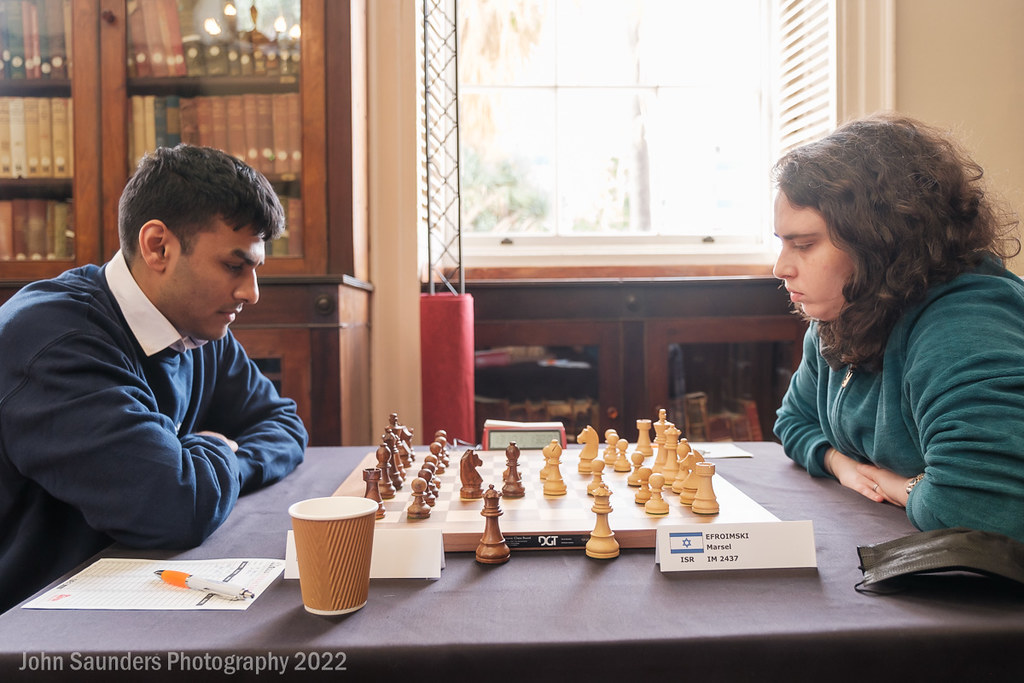 It was a case of ‘Haria Houdini’ against Marsel Efroimski

Ravi Haria also proceeded to 4½/7 by inflicting the first defeat on Marsel Efroimski, who now has 3½/7, but it was somewhat fortuitous. After playing the Giuoco Pianissimo himself on Sunday, he had it played back against his on the Monday. It wasn’t long before White appeared to be pushing him off the board. Black’s 22...Qg5 might have been met by a multiplicity of powerful counters including a devastating 23 Nxf7 but White chose an inferior line and after a few moves was no better than equal when Black uncorked a tactic winning a pawn. A few moves later Black returned the compliment and White might simply have advanced his queenside majority to finish the game, but White went horribly wrong, first missing the win and then a draw. Heart-breaking for Marsel and her team.

Sabino Brunello continues to play a captain’s innings for his team and reached 4½/7 with a draw against Marie Sebag, who is now on 4/7 and unbeaten. The advantage swung back and forth in this complex game, starting with an Advance Caro-Kann. There was a position in the early middlegame where Black was close to overwhelming, if you trust the engines, though it was less obvious to the human eye. Later White had her turn in the limelight though less obviously so. Eventually it petered out to draw. 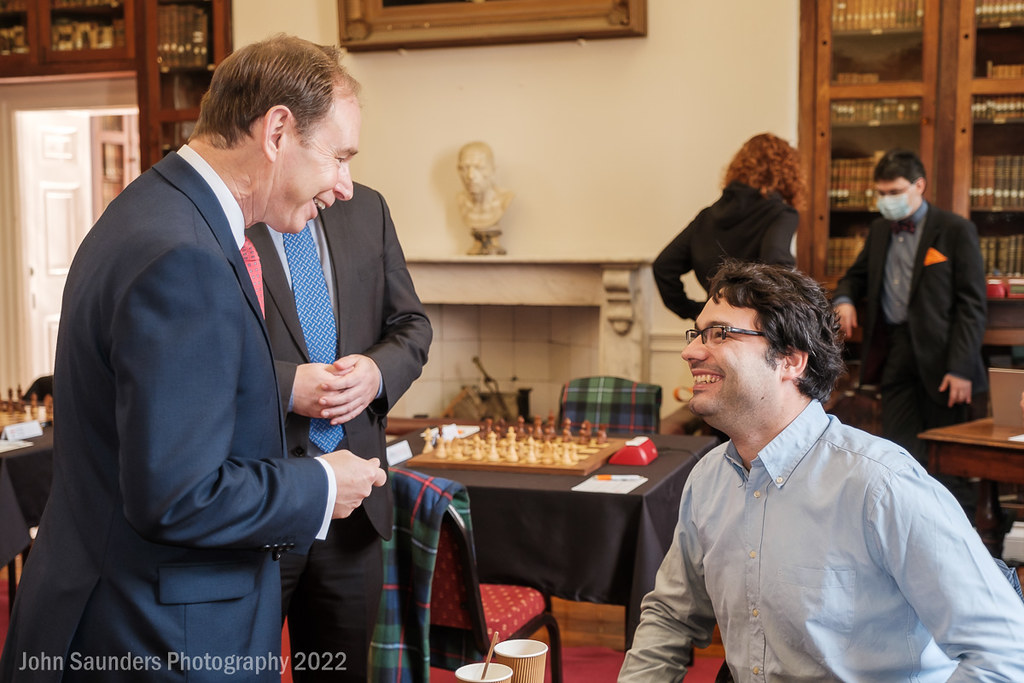 Zhansaya Abdumalik versus Bobby Cheng featured a hefty wedge of Sicilian Richter theory to move 16. Black seemed in better shape at one stage but suddenly there was a position in which White might have engineer an instant win had she found 38 g5 which buys a tempo to keep the f6-pawn and set up a devastating mating attack along the d-file. White played the same idea in a different move order but that was only good enough to draw. Zhansaya Abdumalik now has 3½/7 while Bobby Cheng has 4/7.

Leandro Krysa has been super-solid for Team Sabino, but his unbeaten run might have come to an end had Jovi Houska exploited a golden opportunity to win. That said, she had been slightly worse earlier in the game. But Black really slipped up when he allowed White to take control of the seventh rank. It was by no means easy to find a conclusive plan, however, and the chance evaporated. Another let-off for the men’s team: Leandro Krysa moves to 4/7 whilst Jovi Houska has 2½/7. 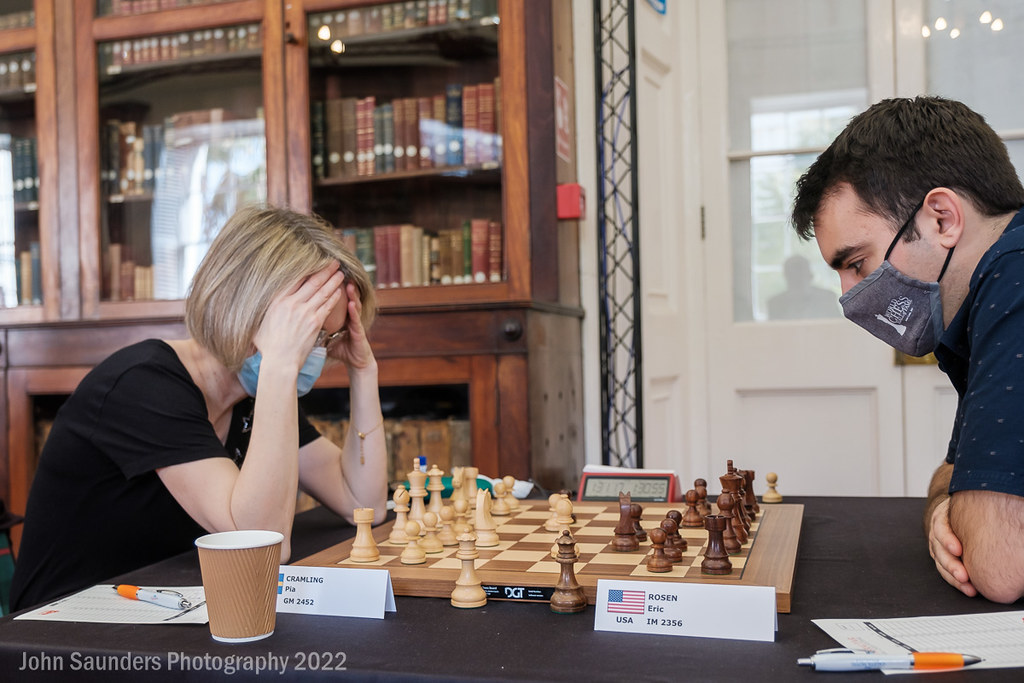 Team captain Pia Cramling had been rock-solid for the women’s side earlier in the event, but she lost her second game in a row to slip to 3/7, with her conqueror Eric Rosen reaching the same score. Her opening, a QGD, looked innocuous and was easy to play against but the damage was done when she retreated her knight to a2 instead of keeping it in the game with Ne4 on move 19. Black soon annexed a pawn and made the denouement look straightforward when it was more a matter of excellent technique. I’m inclined to make this my game of the round in recognition of Eric’s smooth and clean finish against a formidable adversary (sorry, Balazs). 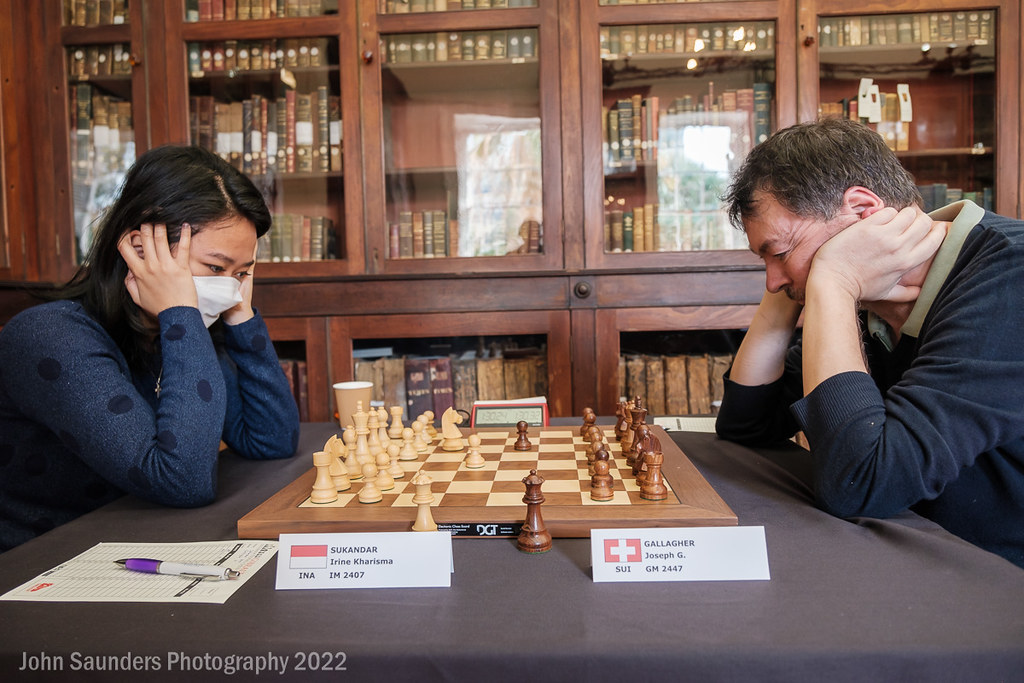 Last game to finish was Irene Sukandar versus Joe Gallagher, a Closed Sicilian which lasted 78 moves and was drawn with only kings and an unpromotable pawn left on the board. The middlegame looked good for Black. White defended tenaciously but then her position got suddenly worse and the move 38...e4 would have ended resistance. But Joe Gallagher missed his chance and eventually had to concede a draw. That was perhaps the only good break the women achieved on a desperately difficult day for them. Irene Sukandar and Joe Gallagher now both have 3½/7.

Photos of Round 7 may be found on Flickr via the web link - https://flic.kr/s/aHBqjzABy1

Live coverage of the event can be found here.