#GibChess Battle of the Sexes Chess Tournament: Round 6

John Saunders reports: Round six of the #GibChess Battle of Sexes, held at Gibraltar’s Garrison Library on Sunday 30 January, saw the men’s team win by 6½-3½ on the day and, for the first time, move into the lead in the overall match by 31 points to 29. It was a round of missed chances and swings of fortune as players became tired and the tension increased. For the first time since our arrival the sun shone outdoors, but not indoors on the women’s games as they didn’t get their fair share of whatever luck was going. Four rounds remain, and now it is the women’s team who need to fight back if they are to share the top prize of £75,000.

Top scorer in Team Sabino is still its titular head, Sabino Brunello, with 4/6. Sabino concluded an early peace treaty with the highest rated player in Team Pia, Mariya Muzychuk, on move 17. Mariya now has 3½/6 which is the best score on the women’s team, along with three others, and she was content to play down her prep from earlier in the day to neutralise the in-form men’s captain and bring his streak of three wins to an end. 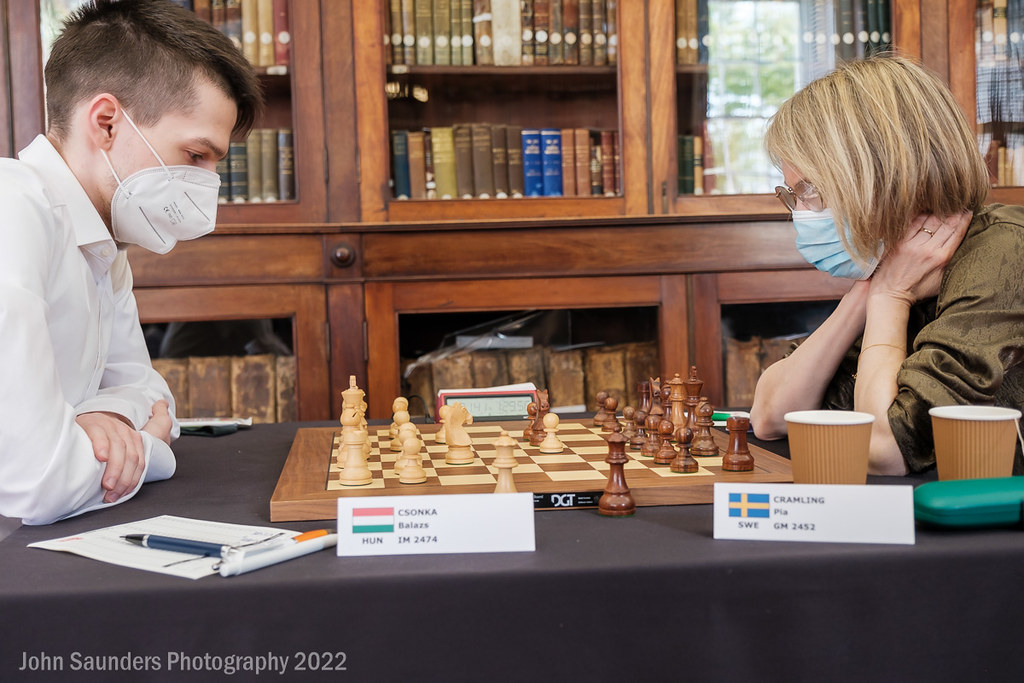 Also now on 4/6 is Hungarian IM Balazs Csonka who is proving to be a considerable thorn in the women’s side. Today he inflicted her first defeat on opposing team captain Pia Cramling, who now falls back to 3/6. The opening was a c3 Sicilian in which Pia opted for the less usual 9...Qxd6 in place of the standard reply 9...Bxd6 or perhaps 9...Be6. Black subsequently lost time and White soon established a lasting edge. White attacked and won a vulnerable pawn, and soon after the game. Impressive play by the young IM from Hungary: this is my choice for game of the day.

One curiosity of the sixth round was that three players who had so far drawn all five of their games won for the first time, two on the men’s team and one on the women’s. Australian GM Bobby Cheng moved to 3½/6 with a win over Gunay Mammadzada which started life as a Bogo-Indian and ran to 79 moves, the longest game of the day. White secured a substantial spatial advantage from the opening and later won a pawn, but a draw still seemed much the likeliest outcome as material was much reduced and the pawns on one side of the board. Eventually, just as it seemed quite pointless for White to be playing on as the draw was a certainty, Black fell for a horrid trap on move 77 to give the men’s team their two-point overnight lead - a heart-breaking outcome for Gunay Mammadzada and her teammates. 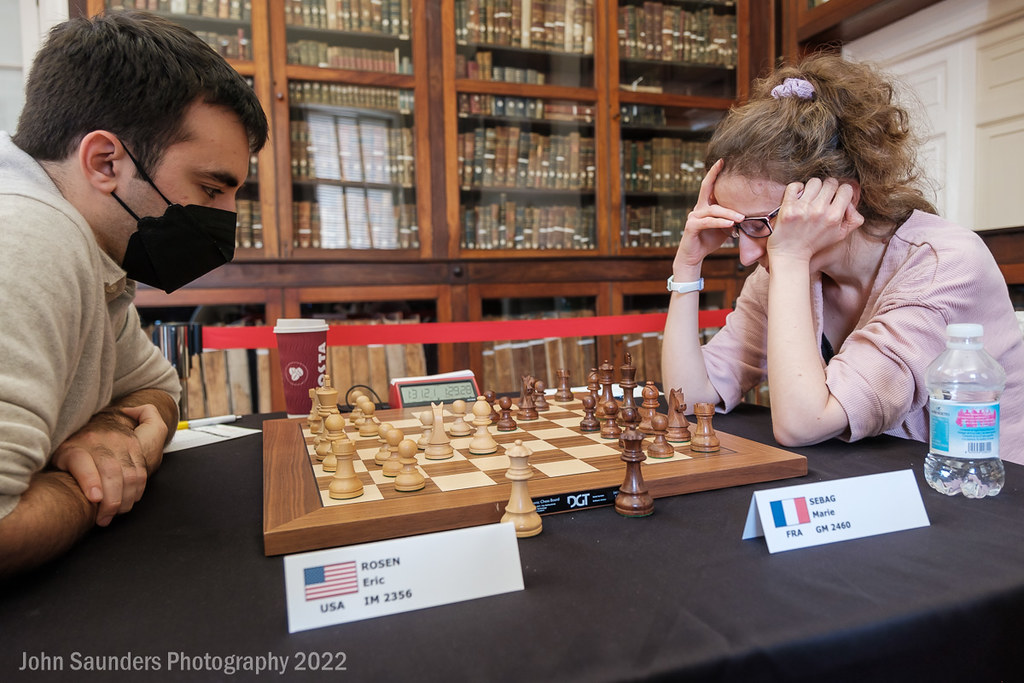 Another “drawmeister” to move to a plus score was Marie Sebag. The French GM moves to 3½/6 at the expense of US IM Eric Rosen who lost his second successive game and now has 2/6. The opening was a Queen’s Pawn, Mason variation, Steinitz Counter-Gambit, according to my new Hiarcs Chess Explorer Pro software which I find extremely useful for following live chess events (and, no, I’m not getting paid for that plug). The Hiarcs book suggested 8...e6 but Black preferred 8...Qxc5 which White answered with Stockfish’s first choice 9 b4. A move or two later 11 cxd5 looks very promising for White, but instead he went in for an ambitious plan. The commentators weren’t impressed, however, nor was Stockfish. It all looked too loose. A few moves later White laid a trap: 22 Rb2 tempted Black into 22...Bxg2 running into 23 Qg5+ and 24 Qxg2 but the tactics didn’t end there. Black’s queen retaliated in similar fashion, easily regaining the piece with a net gain of a pawn and a winnable rook and pawns endgame. It took a while to finish but Black’s endgame technique proved well up to the task. 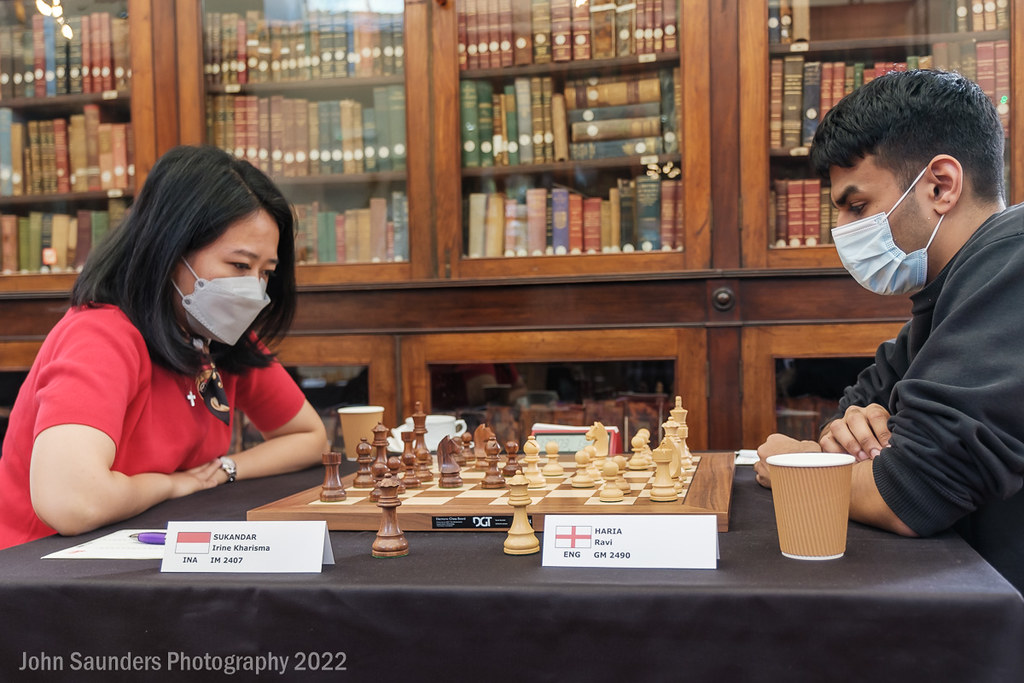 Third in the trio of “drawmeisters” who became winners was English GM Ravi Haria, who is now on 3½/6 after defeating Irene Sukandar, who now has 3/6. This game started life as a Giuoco Pianissimo, but White decided to turbo-power it slightly by advancing d3-d4. That said, it was not much more than level until Black adopted the mistaken plan of ...Nh5 and ...f5 after which her position nosedived alarmingly. At the later post-game chat White thought Black was probably lost already and engines concur. It still required a few accurate moves to lead up to the exploitation of Black’s weaknesses, but White provided what was needed and the end came swiftly. A very efficient win for Team Sabino but another psychological blow for Team Pia.

Leandro Krysa and Marsel Efroimski arrived for their game with one win and four draws apiece and left it unbeaten, which tells you that they both have 3½/6. The opening was a QGD Tarrasch, with White emerging with a slight edge. However, this slipped away and just as it showed signs of becoming slightly interesting, with Black engineering a passed d-pawn, the game ended with a handshake. Black wasn’t objectively much better, but it might have been worth playing a few more moves.

You will recall that Bilel Bellahcene had a nightmare in the first two rounds, losing both games when Tia Pia comprehensively thumped Tia Sabino, but his recovery has been as remarkable as that of his team, with 3½ points from his last four games. His victim in round six was English IM Jovi Houska who is now on 2/6. The opening was a Semi-Slav and both players had chances of an edge in the early middlegame complications before a couple of questionable decisions on moves 24 and 25 left Black with an isolated and vulnerable c-pawn. It still might not have been fatal, but required an analysis engine level of calculation and accuracy to counter White’s threats. It all became too much on move 33 when Black missed her footing and tumbled into a bottomless crevasse of mating threats. 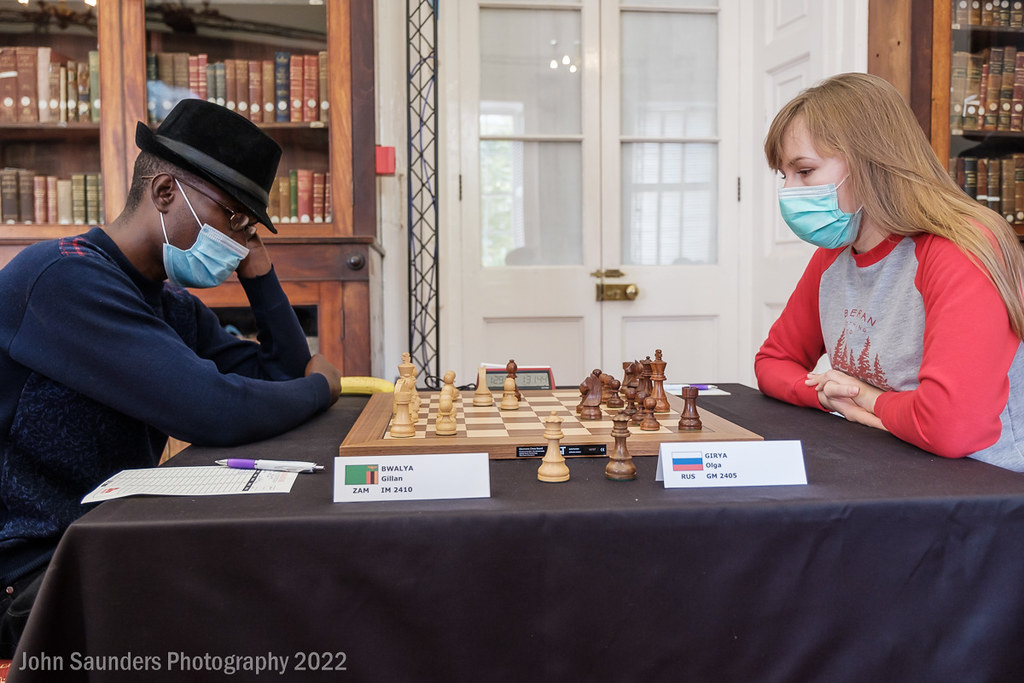 Olga Girya bounced back from her loss in round five to defeat Gillian Bwalya in round six, and now has 3½/6. The opening was a Classical Nimzo-Indian. The game proceeded in accordance with known play until 17 Bd6, when 17 c5 has been played previously, giving back the pawn in a way which averts subsequent pressure against White’s residual c-pawn. As played, White was soon on the defensive. It was instructive going through the resultant late middlegame and early endgame stages of the game with Gillian in our post-game interview (available on YouTube). We both found ourselves in awe of Olga Girya’s excellent technique, particularly the way she managed to shut White’s bishop out of the game, and her relentless pursuit of the win. Chatting with Gillian afterwards, he is obviously disappointed at his ½/5 score and yet greatly relishing the opportunity to meet such formidable and well-schooled opponents. Back home in Zambia Gillian works as a policeman, consequently he is not a professional player and has infrequent chances to meet such a strong field of professional players.

Joe Gallagher and Zhansaya Abdumalik were well-matched, having scored 2½/5 when they met in round six and a draw ensued. The opening was a Ruy Lopez/Spanish with Black playing an early ...g6. It was cagey game. Stockfish advocated something a bit more aggressive for White on move 22, namely Bh4, but the move played was a4. Not too much came of this queenside skirmish, and a few moves later there was a repetition. Thus both are on 3/6. 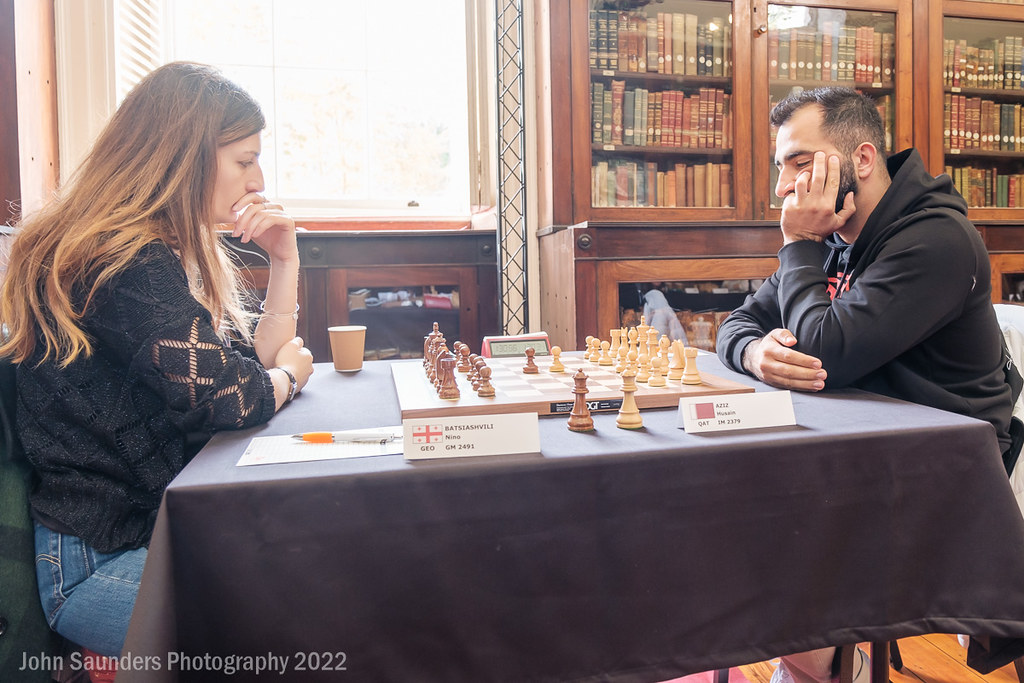 That brings us to a game where the result might have gone the other way (and if it had, the overall score would have 30-30 at the end of the day): Husain Aziz versus Nino Batsiashvili. Both players started round six on a score of minus one, but at the end of the round Husain has 3/6 while Nino has 1½/5. Husain said at the post-game chat: “I was lucky.” This is substantially true, but he made a couple of shrewd decisions at key points which firstly kept him in the game and eventually won it. Husain wanted to do something different in the opening, so he tried a Four Knights. This proceeded by the book until White played 12 b4, which is a misstep of some proportions. The somewhat denuded white kingside demands 12 h3 to ward off a knight move to g4, which duly followed the omission of this important defensive move. Worse followed for White when he thought he could get away with 13 exd5 but was rocked back on his heels after 13...Bxh2+ 14 Kf1 when Black played 14...Be5! This is an absolute killer, or at least should be, as it sets up a queen invasion on the kingside against White’s undefended king. In desperation White sacrificed the exchange and tried to tuck his queen somewhere safe.

It proved just enough to muddy the waters. Just because a computer says +5.00 or +10.00, this doesn’t necessarily mean the winning moves are easy to find. The relevant position in the game wasn’t as easy to win as analysis engines might lead us to believe and Nino shouldn’t beat herself up about missing the win because it wasn’t straightforward. On move 19, she played a queen check - a plausible move, but inaccurate - and suddenly her advantage had evaporated. Another injudicious move followed and suddenly White had gone from dead lost to maybe drawn to much better in the space of three moves. By now White had two minor pieces for a rook and generally better placed pieces. This result would prove a real hammer blow to Team Pia’s hopes of success, and they will have to put this disappointment behind them as they sit down to play White in round seven. 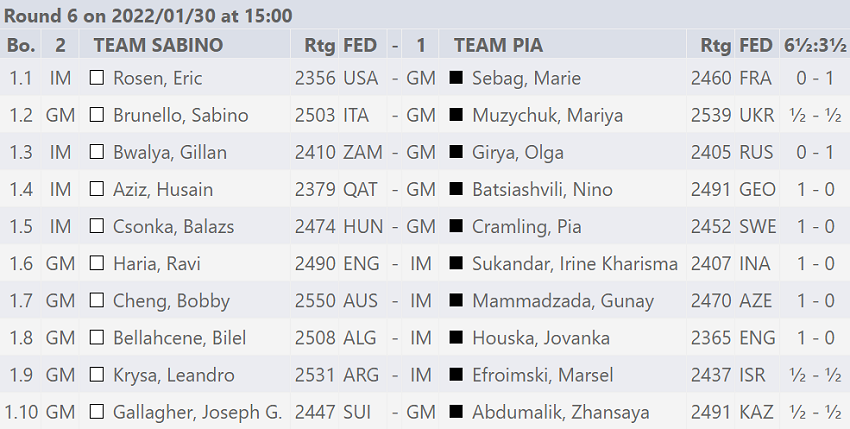 Play continues in round seven on Monday 31 January at 15.00 CET.

Photos of Round 6 may be found on Flickr via the web link - https://flic.kr/s/aHBqjzAvpJ