#GibChess Battle of the Sexes Chess Tournament: Round 10

John Saunders reports: Round ten of the #GibChess Battle of the Sexes match-tournament, held at Gibraltar’s Garrison Library on Thursday 3 February, saw the men’s team win by 6½-3½ to finish overall winners by 53-47. On the day they needed four points to be sure of overall success, but they managed to go undefeated on the day as three of their number won their games to reach a score of 6½. The winners on the final day were Bobby Cheng, who beat Jovi Houska; Ravi Haria, who beat Olga Girya; and Bilel Bellahcene, who defeated Marie Sebag (her only loss of the event). Balazs Csonka drew his game with Marsel Efroimski and this was enough to secure his second grandmaster norm. 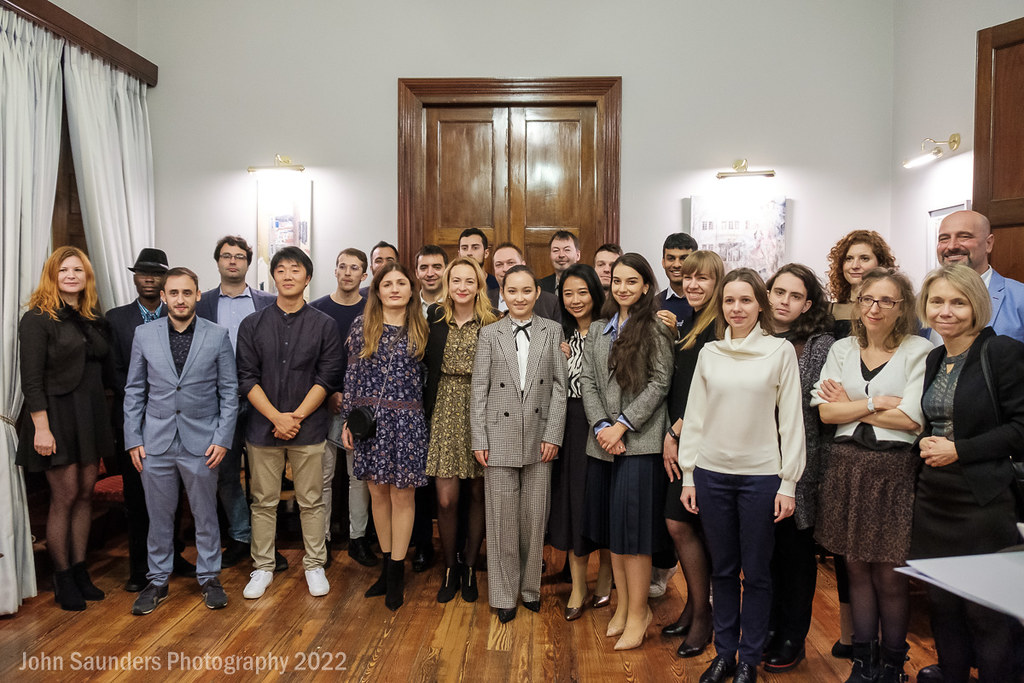 The best individual score of 7/10 was achieved by Balazs Csonka (Hungary) and Bilel Bellahcene (Algeria). One member of the women’s team, Mariya Muzychuk (Ukraine) scored 6½/10, as did two members of the men’s team, captain Sabino Brunello (Italy) and Ravi Haria (England).

With a deficit of three points and only the black pieces to play with, it was always going to be a tough ask for Team Pia to turn the match round on the final day. Inevitably there were some quick draws as women’s team players found themselves being shut out from the start as experienced men’s team players knew how to steer games towards the draw. The first such game to finish was Joe Gallagher versus Antoaneta Stefanova in which the Anglo-Swiss player opened with an Italian Game, or Giuoco Pianissimo as it was once known. The former women’s world champion explained in an interview how she tried to imbalance the position but concluded that “maybe 1...e5 in answer to 1 e4 was a mistake.” The game was drawn in 19 moves. The video is also worth watching for a senior moment on my part, suggesting a rook move for Antoaneta that would have left it en prise to a bishop, leading to my receiving a gentle rebuke from Antoaneta.

The game between Eric Rosen and Irene Sukandar featured a similarly cautious opening with the popular US streamer opting for a line of the Four Knights’ Defence which is ultra-solid and which makes it hard for Black to entertain any winning chances. It lasted a little longer but ended in a draw after 29 moves.

Team captain Sabino Brunello also went in for a rock-solid formation, this time with 1 d4. The Torre Attack is a dependable line for a player with the white pieces and the game didn’t stray far from a +0.00 assessment on analysis engines. It came down to a level minor piece endgame and on move 37 Black offered a draw which was accepted. 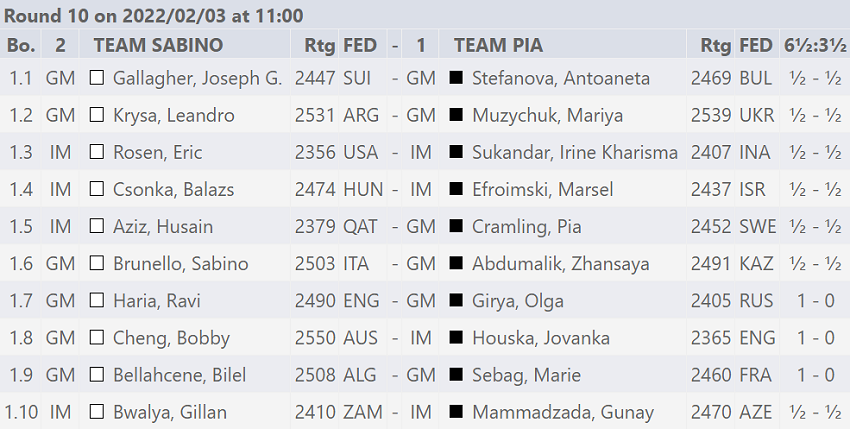 Pia Cramling answered Husain Aziz’s 1 e4 with 1...c5 and a Nimzowitsch-Rossolimo Attack ensued. White gained a big centre and might have pushed on to increase his edge on the kingside, but opted for a decidedly more dubious plan of creating a passed d-pawn which was soon lost. Black missed a clever idea on move 28 which might have won (28...Qd4!) but instead allowed a perpetual check.

Balazs Csonka versus Marsel Efroimski seemed to proceed much faster than other games. It started as a Tarrasch variation of the Queen’s Gambit Declined. Probably the best way to gain an idea of it would be to watch Balazs Csonka equally rapid annotation of it in the post-game video after I had told him we were trying to confine the post-game chat to about five minutes. Balazs is a determined young man and I’d hazard a guess that never has so much verbal analysis been packed into such a short period of time. 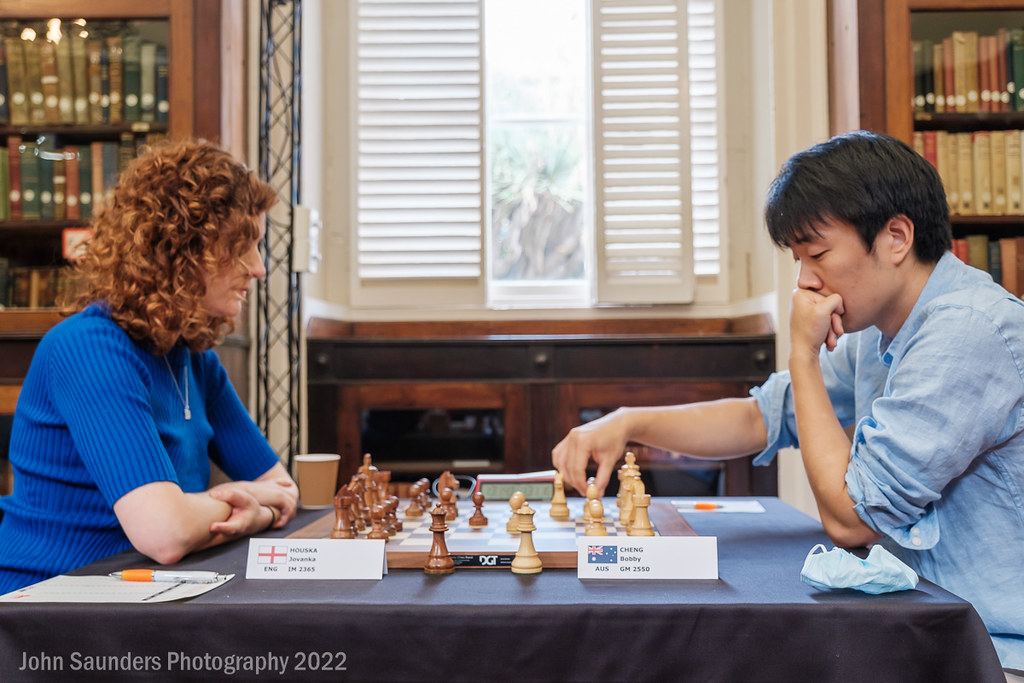 Bobby Cheng all but sealed the destination of the £75,000 first prize by defeating Jovi Houska

With five draws already being agreed, the women’s team target of 6½ points was already a fading hope when Bobby Cheng obtained the first decisive result of the round against Jovi Houska. The opening, a Catalan, was slightly unusual, but not entirely unprecedented, in that White, surprised by his opponent’s 5...Bd6, expended three moves on locating his dark-squared bishops, while Black used two in posting hers. The slight loss of tempo by White didn’t make much difference, however, as the position was closed. “I just played something harmless, just to get a game and it was completely equal for a long time. But she got low on time and started making mistakes.” Black looked absolutely fine until 27...b5 which was a serious positional blunder allowing White to play 28 c5 and create a passed pawn which was capable of being advanced rapidly with support from rooks and bishops. With only eight minutes and increments remaining for 13 moves that was effectively curtains for Black, and a desperate attempt to muddy the waters with 29...e5 was refuted. This result left Team Pia with the next to impossible task of winning all four remaining games to tie the match.

Leandro Krysa versus Mariya Muzychuk was a sternly contested game in a trendy line of the Semi-Slav, though different from the one the Argentinian GM had followed in his game from round eight against Antoaneta Stefanova. 16...Qa5+ is the usual continuation but Black opted for something only seen before in a correspondence game. Once again White had opted to surrender a pawn for play and, though he didn’t get the winning chances he had against the other ex-women’s world champion in the field, he regained his pawn for a safe position. Black played on to move 44 but there was never really much chance of either player achieving a decisive result. The result meant that the men’s team could relax in the knowledge that the first prize was theirs to share. 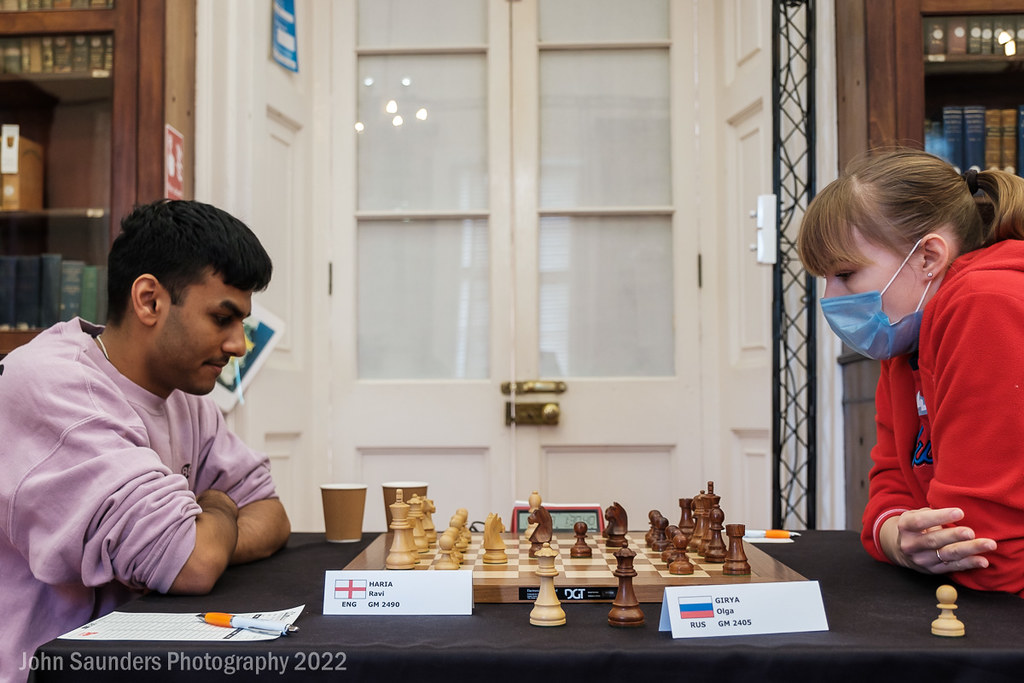 Ravi Haria completed a strong finish to the tournament with a win against Olga Girya. The opening, a Ruy Lopez, featured a line which had debuted at an earlier Gibraltar tournament when Emil Sutovsky had introduced 11 Qe1 against Daniele Vocaturo in 2018. The game appears three times on the database but until Olga Girya played it nobody had as yet tried 11...Bxf3 to double White’s pawn in front of the white king, preferring 11...Nc5, which is the move Stockfish 14 prefers when given a long time to calculate it. When interviewing Ravi after the game, he also thought capturing on f3 made Black’s game more difficult and he intended to meet 11...Nc5 with 12 Nd4 Nxd4 13 cxd4 Ne6 14 Qd2, which is what Sutovsky and later MVL played here. Incidentally, during the interview I recall peering at the board wondering why Black couldn’t play 12...Ng5 after 12 gxf3 but didn’t ask the question. It seems that 13 Qe2 is the answer with engines giving White a considerable plus after that, probably because the knight soon gets chased away by the f-pawn and ...Nh3+ will soon lose valuable tempi at the least. Ravi thought the game proceeded smoothly in his favour; Stockfish had one quibble with this, advocating 21...Bh6 22 Qg4 0-0 as a means of reaching a playable position and apparently unconcerned by 23 Qxh5 giving Black doubled h-pawns. As played, White established a firm positional grip which Black never looked like escaping. Once White had invaded with his rooks, it was plain sailing. 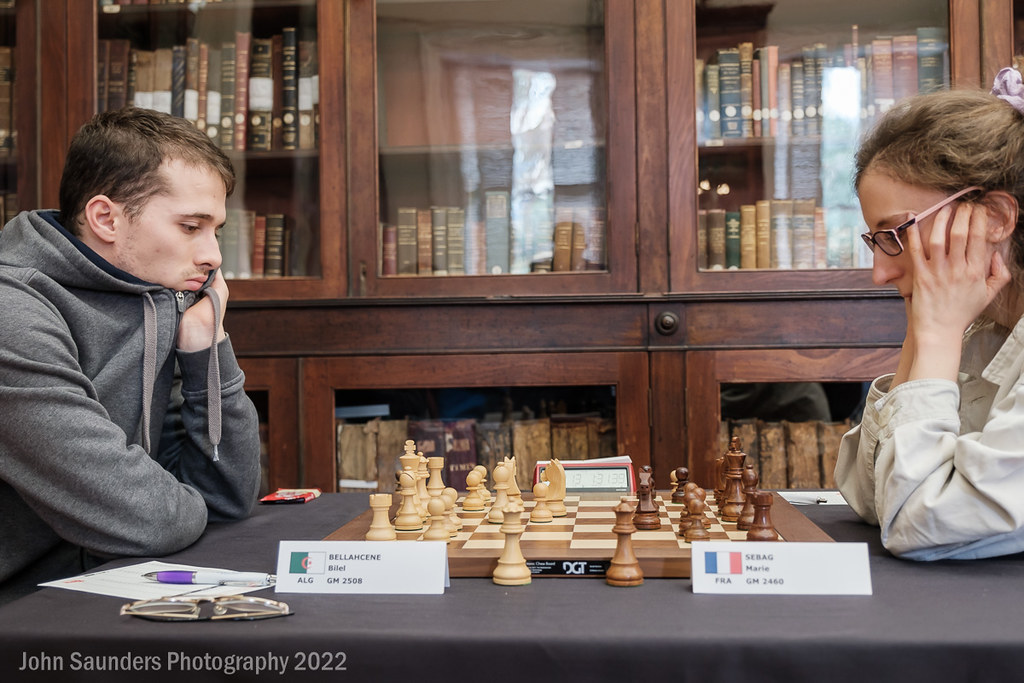 By this stage of the event, it suddenly seemed a very long time ago that Bilel Bellahcene had lost his first two games in the dramatically successful start for Team Pia. Since then, he had gone from strength to strength and, by defeating Marie Sebag, finished by scoring a remarkable 7 points from eight games and thus shared the best score in the match with his team-mate Balazs Csonka. In this final round game White adopted the Byrne Attack versus Black’s choice of the Najdorf Sicilian, making it the third time the Algerian player had unleashed an early g4 against an opponent in his five white games. In the early middlegame White established a knight on c6. Black decided to counter this with a queen exchange, but it worked out slightly worse for Black and left her with little chance of a decisive result though she pressed valiantly. Instead, engines suggest playing 17...0-0, giving up the d-pawn for some sharp counterplay against the white king which might have offered more realistic winning chances. Black was a little short of time and spoilt her position on move 34 when 34...Nd7 might have saved the game though it would not have affected the match result. This ended Marie Sebag’s unbeaten run and left Mariya Muzychuk as the only undefeated player on Team Pia (if we discount Antoaneta Stefanova who only played four games).

The last game to finish was that between Gillian Bwalya and Gunay Mammadzada. The Zambian IM opted for the so-called Spielmann variation against the Nimzo-Indian, distinguished by the move 4 Qb3. The early middlegame looked very promising for White but he spoilt his position with some exchanges and soon found himself on the defensive. A long and tricky rear-guard action commenced, with White losing a pawn to a tactic just before the time control and thereafter concentrating on blockading Black’s passed d-pawn. Black came close to winning but after the premature advance 73...d3+ it never looked possible. The game ended in a draw and the 2022 #GibChess Battle of the Sexes was finally over.

Later the same evening the players, officials, sponsors and guests adjourned to the Mayor’s Parlour at the City Hall in John Mackintosh Square which is some 300 metres north of the Garrison Library where the chess was played. There we were treated to a splendid feast, with the guests of honour the Hon. Sir Joe Bossano MP, Minister for Economic Development, Enterprise, Telecommunications & the Gibraltar Savings Bank, the Hon. Steven Linares MP, Minister for Housing, Employment, Youth and Sport, and Dr Jennifer Ballantine, director of the Garrison Library which had so kindly hosted the event. 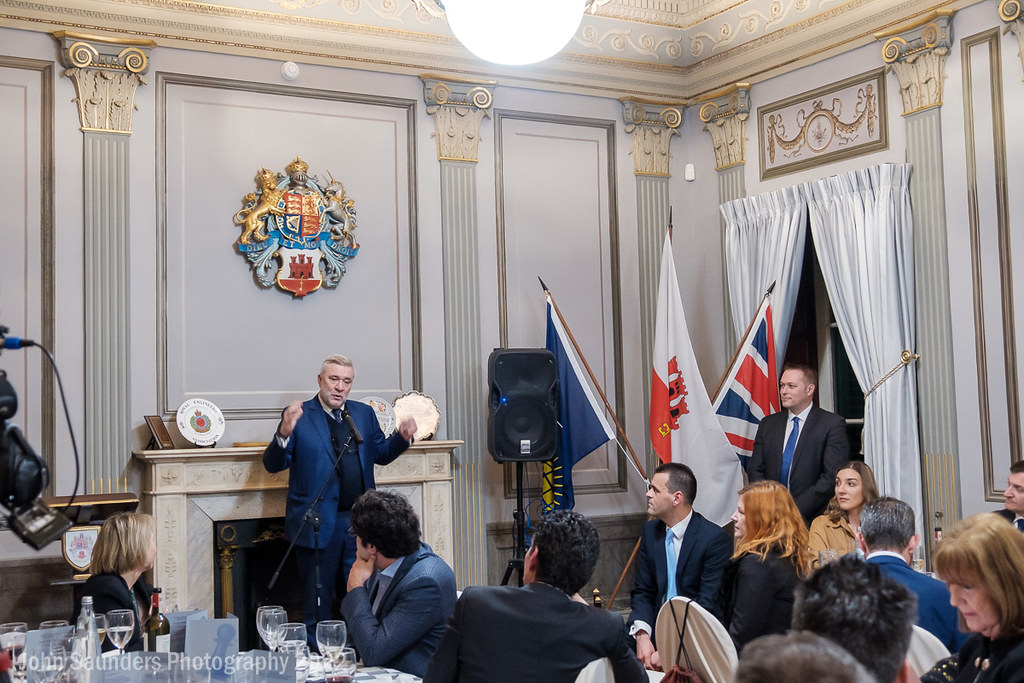 The Hon. Steven Linares addresses the guests at the prizegiving dinner

Minister Linares, a long-time friend to the Gibraltar Chess Festival, presented the team captains with their cheques and made a typically witty speech. A warm vote of thanks was made to the festival’s generous sponsors who made the event possible. Suffice to say that a convivial time was had by all, which can be seen from a perusal of the photos (see the link below). 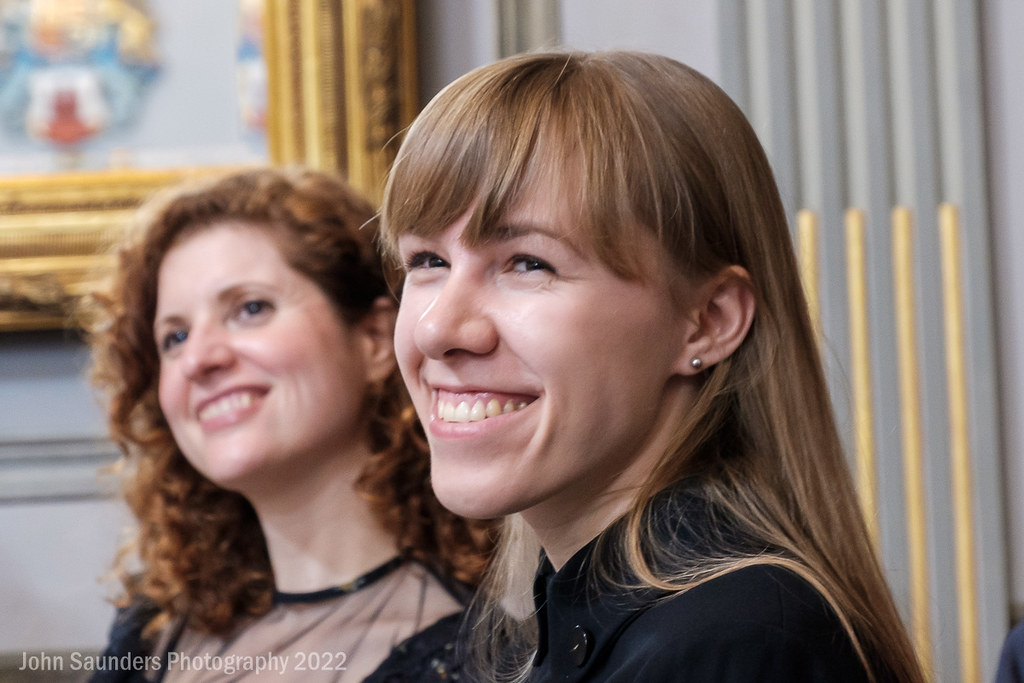 I’m not empowered to make any official announcements, but I think it’s fair to say that there is a very reasonable chance of seeing a similar event taking place in the not too distant future. In Gibraltar. Where else? Watch this space.

Photos of Round 10 may be found on Flickr via the web link - https://flic.kr/s/aHBqjzAY13

Photos of the Prizegiving may be found on Flickr via the web link - https://flic.kr/s/aHBqjzB757